Historical: China (1955) described the lestoniids as a new subfamily of Plataspididae based on characters of the hind wing venation and the two-segmented tarsi.

groups, with five homoplasious characters supporting the relationship: well-developed triangulin (an erroneous interpretation; see explanation of the characters), two-segmented tarsi, obsolete frena, enlarged scutellum that covers the abdomen, and contiguous ninth paratergites. The Plataspididae is unique in having almost the entire pleural region covered by the evaporative area, whereas the Lestoniidae has an extremely reduced evaporative area. Fischer (2000, 2006) considered the disc-like organs of the Lestoniidae to be homologous with the Pendergrast̕s organs of the Acanthosomatidae and associated the two taxa on that basis. Additional characters suggesting a common stem-species for Acanthosomatidae and Lestoniidae include the structure of the male genital segments, the arrangement of the abdominal scent-gland openings, and the number of tarsomeres. McDonald (1969, 1970), Schaefer (1993a), and other authors erroneously considered the spermathecal flanges to be absent in Lestoniidae (see explanation of characters); Fischer (2000) corrected this misinterpretation and illustrated the spermatheca of Lestonia haustorifera China as possessing a proximal flange.

Analytical result: The placement of the Lestoniidae has been controversial, in large part because of its many novel morphological attributes. Because the most commonly collected species is small, and usually taken in very limited numbers, acquiring a decent sample of specimens takes considerable effort in the field. Our own fieldwork has allowed the present analysis to benefit from the recently published morphological analysis of Fischer (2000) and DNA sequence data for the group. Our morphological analyses (e.g. Figs 43 View Fig and 44 View Fig ) offer a less than convincing placement for the group, and only the PIWE result supports a sister-group relationship with Acanthosomatidae as proposed by Fischer (2000). However, all of our results that include DNA sequence data show the Lestoniidae + Acanthosomatidae forming a monophyletic group. The molecular data alone treat Lestonia as part of the Acanthosomatidae ( Figs 45 and 46 View Figs 45–48. 45 ), whereas the combined analyses always place Lestonia as the sister group of the Acanthosomatidae sensu stricto ( Figs 51–55 View Figs 49–52. 49 View Fig View Fig View Fig ). Morphological characters supporting the monophyly of the former grouping include: tarsi two-segmented (291), abdominal sternite VIII in males at most partially covered by segment VII (400), and Pendergrast̕s organ present in females (441). 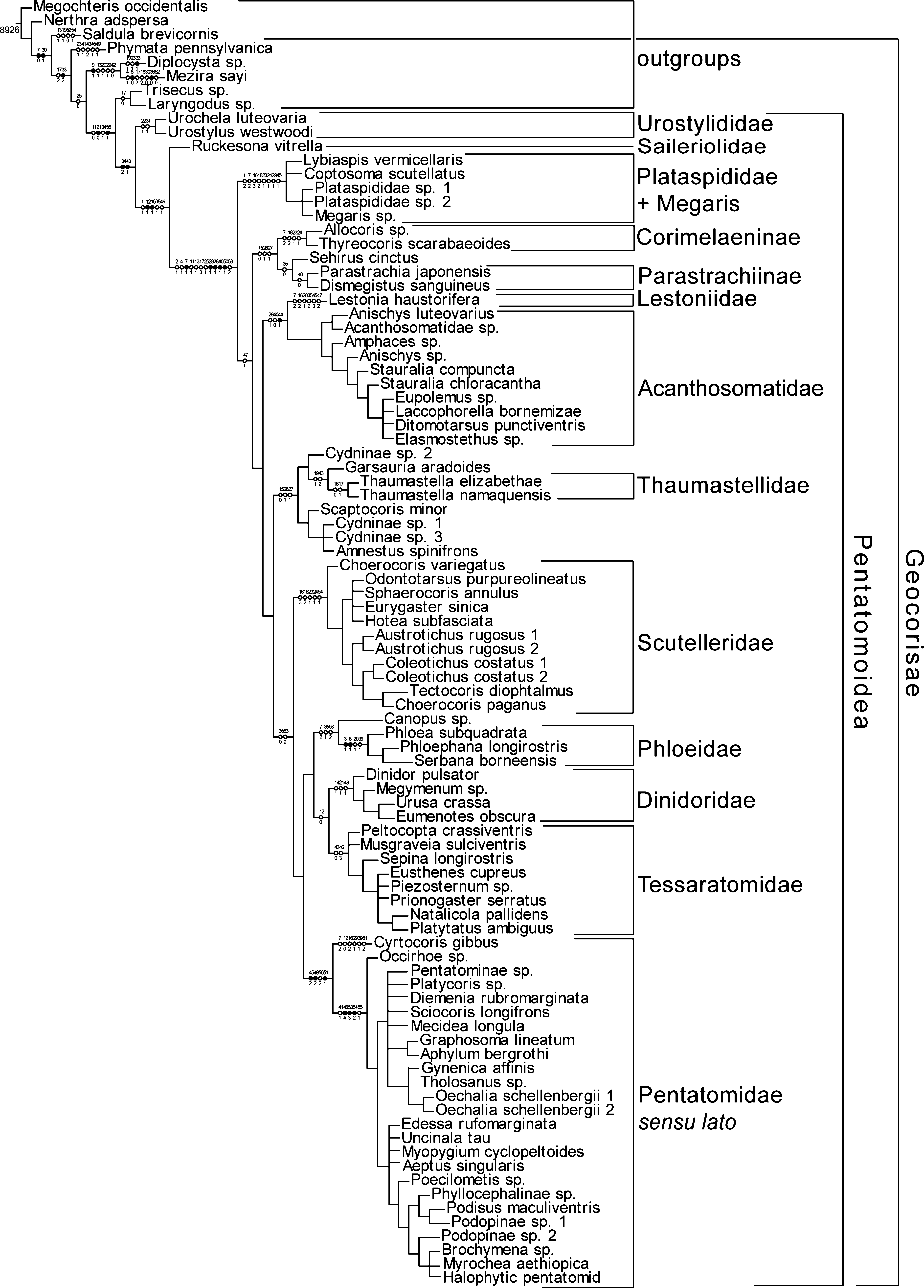