Etymology. This species is named in honor of Dr. Shusuke Ono, who introduced the first author to zoanthids and has played a major role in zoanthid research in Japan. Noun in the genitive case.

Paratypes (all from Galapagos, Ecuador):

Polyps are approximately 4–12 mm in diameter when open, and rarely more than 20 mm in height. Colonies may reach sizes of over a meter in diameter.

Morphology: Terrazoanthus onoi  has bright red or red-brown oral disks and the outer surface of polyps is tan to dark brown, with polyps relatively clear of the coenenchyme. T. onoi  has 32 to 40 tentacles that are almost as long as the diameter of the expanded oral disk ( Figure 3View Figure 3).

Differential diagnosis. In the Galápagos, Terrazoanthus onoi  differs from Parazoanthus darwini  and Antipathozoanthus hickmani  by substrate preference (rock as opposed to sponges and anthipatharians, respectively), as well as from Terrazoanthus sinnigeri  sp. n. (below) by both color (bright red as opposed to brown, white or transparent) and habitat ecology (exposed rock surfaces as opposed to under rocks and rubble). In addition, T. onoi  is bigger (oral disk diameter and polyp height) than T. sinnigeri  , and forms much larger colonies ( Table 3). T. onoi  commonly has only basitrichs and microbasic p-mastigophores in its pharynx, and no large or small holotrichs at all, unlike T. sinnigeri  ( Table 2).

Phylogenetically, Terrazoanthus onoi  is very closely related to T. sinnigeri  , with identical COI and mt 16S rDNA sequences, but consistently differs by four base pairs in ITS-rDNA, and forms a clade separate from T. sinnigeri  .

An extensive literature search revealed no other described Parazoanthidae  species from the Pacific that are non-epizoic and bright red in color. An undescribed zoanthid species inhabiting rock and coral reef substrata from Indonesia often referred to as “yellow polyps” (sensu Sinniger et al. 2005) is likely also a Terrazoanthus  sp., but is distinct from T. onoi  in terms of color and distribution, and is phylogenetically different.

Habitat and distribution. Specimens of Terrazoanthus onoi  were found on rock substrate in areas of high current (i.e., the base of large rocks, rock walls, etc.). Colonies were found at Darwin, Marchena, Genovesa, Isabela, Pinzon, Española, and Floreana Islands, and it is likely T. onoi  is found throughout the archipelago. This species has been found from the low infra-littoral to depths of over 35 m, and is likely to be at even deeper depths.

Biology and associated species. Found on the top surfaces of rocks and biogenic non-living substrate, Terrazoanthus onoi  is often found close to sponges, seaweed, and oth- er benthos, but is not epizoic and does not have an association with any particular species. 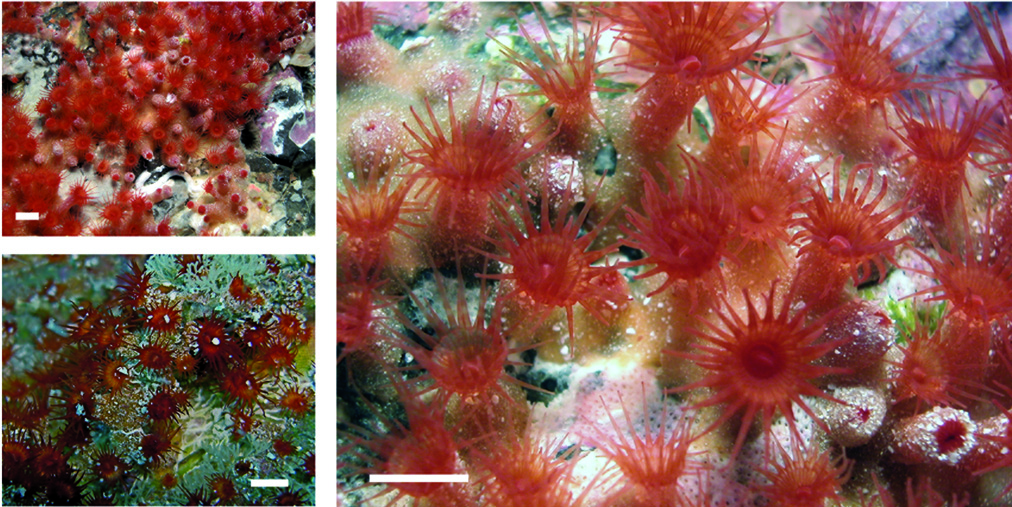