Brief redescription. Apart from the morphological traits mentioned in the diagnosis section, C. cornigera   is also characterized by having female antenna 12-segmented and filiform, male antenna 15-segmented and filiform ( Fig. 6a View FIGURE 6 ); vertical carinae on the lower face incomplete, running from inner ventral margin of the toruli almost 2/3 of the lower face length and delimiting a depressed area that is bulged medially, forming a medial ridge ( Fig. 3e, f View FIGURE 3 ); mesoscutum strongly coriaceous with weak discontinuous transversal elements ( Fig. 6b View FIGURE 6 ); notauli almost complete, faint in the anterior 1/3 or before reaching the pronotal margin; median groove visible at most in the posterior 1/3 of the mesoscutum; mesoscutellum ( Fig. 6b View FIGURE 6 ) densely but weakly wrinkled, more strongly wrinkled laterally and posteriorly, interspaces strongly coriaceous; third metasomal tergum with an inconspicuous posterodorsal patch of micropunctures and subsequent terga very finely punctate; radial cell 2.7 times as long as wide; body mainly black. For more details on the morphology of this species, consult Melika & Buss (2002) and the remarks section of this species (see below).

Remarks. Ceroptres cornigera   was originally described from 18♂ and 18♀ ( Melika & Buss 2002: 629). We examined 3♀ and 5♂ deposited in USNM, including the holotype. According to G. Melika (pers. comm.), no mor- phological differences have been observed between specimens obtained from sexual and asexual galls.

Ceroptres cornigera   was characterized by Melika & Buss (2002: 626); however, after studying its type material, we found some inconsistencies in the original description, and especially in the illustrations provided to characterize the species: (i) vertical carinae on the lower face are narrow and curved outwards in their distal half according to the illustrations, but in the type material examined these carinae are somewhat broad and straight, not reaching the oral fovea; (ii) the specimens examined have a median ridge between the two vertical carinae ( Fig. 3f View FIGURE 3 ), which is not represented in the original illustrations nor commented on in the description; (iii) genae are expanded behind compound eyes in the original illustrations, but this trait has been exaggerated since genae are from very slightly to not expanded in the specimens examined ( Fig. 3e View FIGURE 3 ); (iv) lastly, the mesoscutellum has a medial ridge between the scutellar foveae that reaches the mid of the mesoscutellum according to the original illustrations, but this ridge is absent in the specimens examined ( Fig. 6b View FIGURE 6 ). Furthermore, POL:OOL:LOL and OOL/diameter lateral ocelli relations are not commented on in the original description. 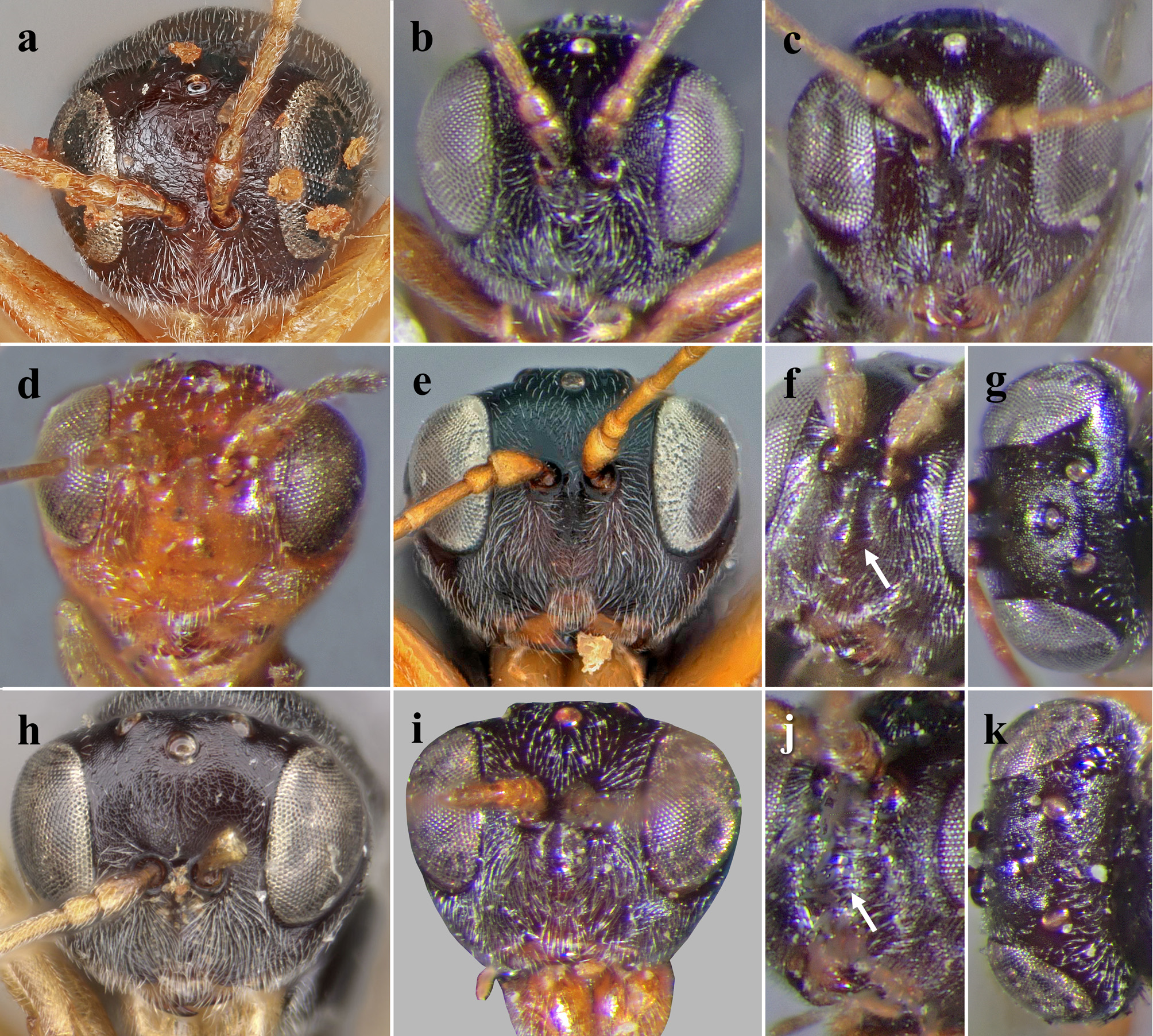 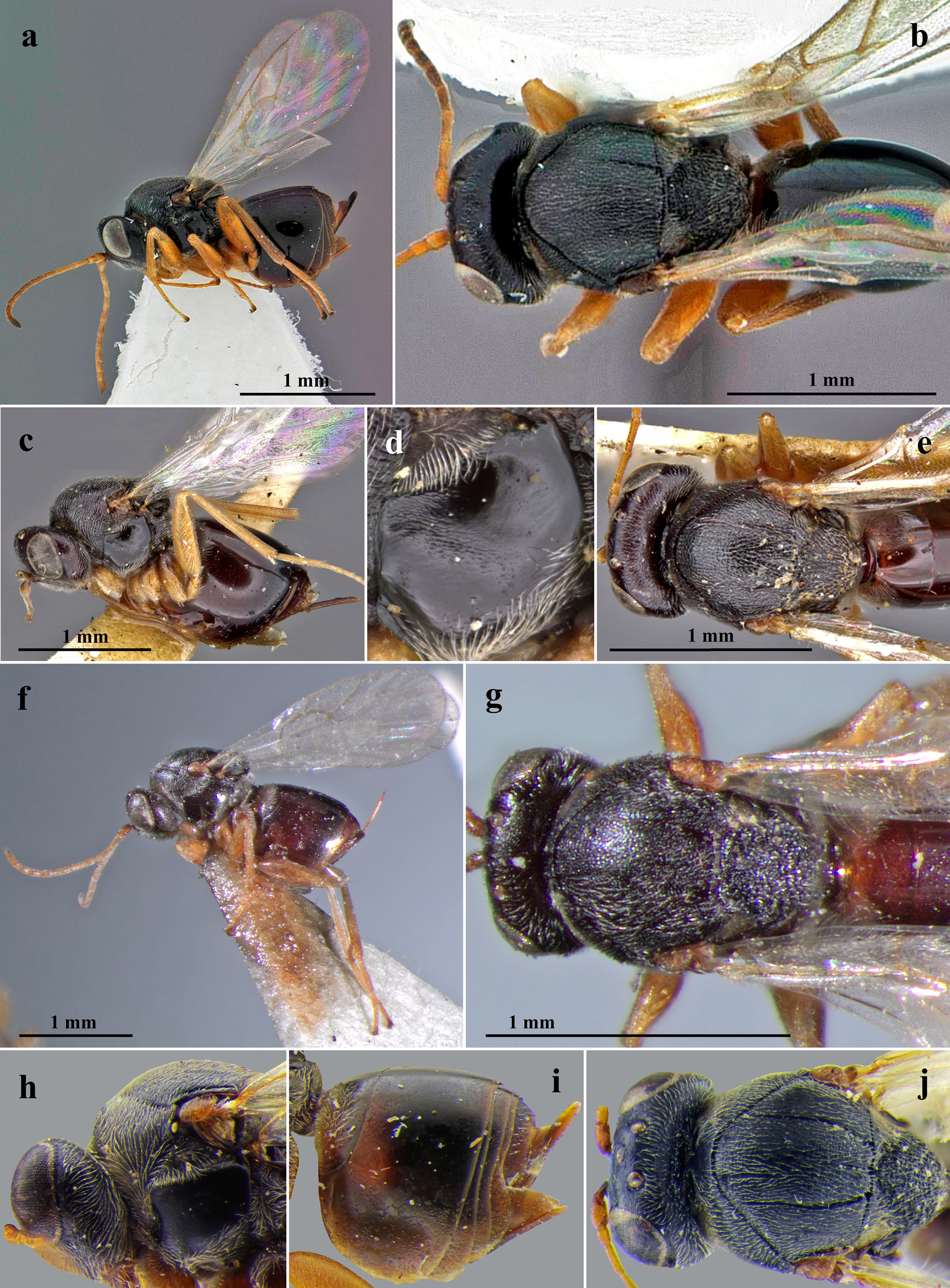