Mesonotum with many short setae; acrostichals not clearly differentiated, except for posterior achrostichals, which are about twice length of anterior ones; posterior three dorsocentral setae long with posterior seta longest; intra-alars not clearly differentiated except for posterior intra-alar which is about same length as penultimate dorsocentral setae; posterior supra-alar setae long, not much shorter than posterior dorsocentrals; anterior supra-alar, anterior and posterior notopleural setae, presutural seta and humeral seta about equal in length; humeral callus with one long seta and one or two short anterior setae; mesopleuron with one long and 9–13 short setae; sternopleuron with one long and two to four short setae; scutellum with very long marginal subapical setae, and shorter marginal basal setae.

Egg. Spindle-shaped, length 0.65 mm, width 0.26 mm tapering to a short blunt “pedicel” at the micropylar (anterior) end and with a long pointed process at the posterior end ( Taylor et al. 1996).

Gall. Ovoid, bulbous structure ( Figure 3F View Figure 3 ), length 18–50 mm, width 12–20 mm ( Taylor et al. 1996) containing up to 200 discrete cavities each containing a single fly larva or puparium. Galls are formed from terminal, meristematic leaf primordia comprising a number of leaves, with the ventral surface of the outermost leaves forming the outer surface of the gall. Leaf veins could be seen on the surface of the gall, and in some, ungalled leaf tissue emerged along the side of the gall or extended beyond the gall tip. Fresh galls mostly green but may become reddish on exposure. At gall maturity, plant stem senesces at the base of gall, which turns light brown and may split with dehydration, and becomes dark brown with age. Old galls may persist on host for several seasons. The histology of these galls was examined (as Fergusobia   / Fergusonina   -induced shoot bud galls on E. camaldulensis   , in Giblin-Davis et al. 2004), where hypertrophied tissue two to nine cells thick was found lining the lumen of the locules.

Revised diagnosis. For other species of Fergusonina   , all life stages have been described only for F. nicholsoni Tonnoir ( Currie 1937)   , F. turneri Taylor (Taylor 2004)   and F. giblindavisi Taylor ( Taylor and Davies 2008)   . Using available descriptions in Malloch (1925, 1932), Tonnoir (1937), Currie (1937), Taylor (2004), Taylor et al. (2007) and Taylor and Davies (2008), F. lockharti   can be separated from most species of Fergusonina   on the structure of the dorsal shield of the larvae, setation of the female terminalia, structure of the male terminalia and gall type. Of the remaining species where descriptive data could not separate F. lockharti   , type material has been examined. From these species, it differs as follows: F. lockharti   is similar to F. flavicornis   in general colour pattern and setation of the female terminalia and is separated only by the degree of pigmentation of the ‘pleurae’ in the key of Tonnoir (1937). Fergusonina lockharti   differs from F. flavicornis   in being considerably larger and the yellow band on the posterior margin of each abdominal tergite is wider (the abdomen of the holotype of F. flavicornis   is dark, with only a narrow pale band on the posterior margin of each tergite). The wing of F. lockharti   is longer and proportionally narrower, whereas that of F. flavicornis   is short and broad. In F. pescotti Tonnoir   , in which the setation of the female terminalia is consistent with F. flavicornis   , abdominal segment 7 is considerably shorter, and the aedeagus has one terminal tooth and no lateral teeth. 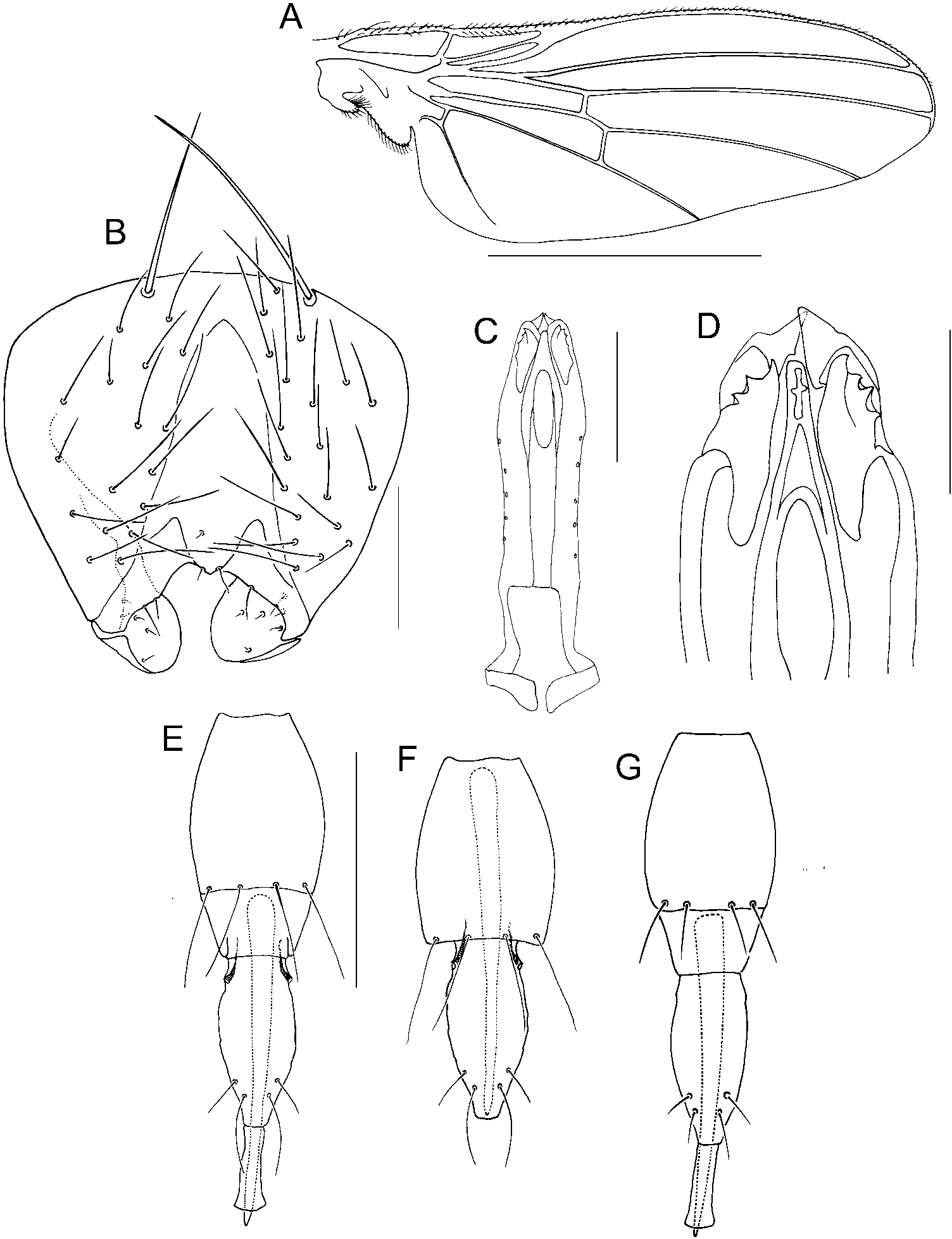