Of all recent invasive species, Diaphorina citri   ( Fig. 2A View Figure 2 ) has received particular attention because it is a confirmed vector of the phloem limited gram-negative bacterium Candidatus Liberibacter   asiaticus, one of the pathogens that cause the devastating citrus disease “Huanglongbing” (HLB) or citrus greening disease ( Halbert and Manjunath 2004, Grafton-Cardwell et al. 2013). Besides being a vector of HLB, the Asian citrus psyllid, D. citri   , can cause direct damage to its host plant by sucking large amounts of sap, injecting toxins that cause malformation of leaves and shoots and by inducing sooty molds that grow on the honeydew they produce ( Michaud 2004). Diaphorina citri   has a worldwide distribution; in South America it is known from Argentina, Brazil, Colombia, Paraguay, Uruguay and Venezuela ( Augier et al. 2006, Cermeli et al. 2007, EPPO 2005, ICA 2010a). In Colombia, D. citri   was reported in Colombia for the first time in 2007 and has been recorded since from the States of Antioquia, Atlántico, Bolívar, Caldas, Cauca, Cesar, Córdoba, Cundinamarca, Magdalena, Meta, Norte de Santander, Quindío, Risaralda, Santander, Sucre, Tolima, and Valle del Cauca ( ICA 2010a). 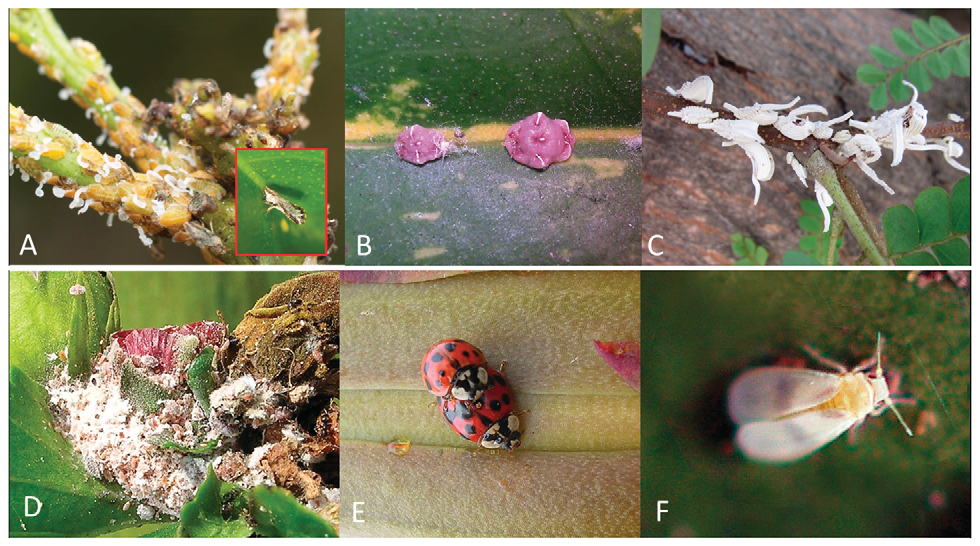