Diagnosis. Egg spherical with 30–50 deep polygons each centred on a longitudinal groove and with steep internal slopes and edges frilly, perhaps extended into narrow outgrowths. Male rostrum larger than occipital outgrowth.Telsonic spines 16–20. Cercopod with <8 short setae on basal 40%. Clasper with projection at mediodistal corner of hand <10% of distal clapser width and first large plap with only 2 palpomeres though 2nd clasper with 3 palpomeres.

Carapace ( Fig. 10 View FIGURE 10 A) elongated oval with highest point midlength, pellucid but darker dorsally, and with hardly any indication of growth lines. Adductor muscle scar at about 45° to carapace long axis, only visible when animal removed from carapace.

Female. Head ( Fig. 10 View FIGURE 10 F) with ocular tubercle prominent, with compound eye occupying about 90% of it. Rostrum asymmetrical, bulkier than the head, protruding about as much as the ocular tubercle, but basal width about 1.5× that of tubercle. Ocellus middorsal on rostrum, about half size of eye. Dorsal organ posterior to eye by about half of its height, pedunculate and asymmetrical and about threequarters length of ocular tubercle.

Telson ( Fig. 10 View FIGURE 10 G) as in male, though with about 22 posterior row spines, otherwise with cercopod similar.

Egg ( Fig. 5 View FIGURE 5 K, L). Egg spherical (diameter 315 and 324 µm in two populations and 216 µm and 235 µm in two other populations, n = 20) with many projections from the 30–50 polygons. Each polygon elongated around central groove and with projections arising from most angles, longer in some populations than others. Groove usually deep within sloping floor and polygon walls steep and narrow.

Variability. Specimens from the four sites exhibited the usual variation in meristic characters with ±1 for antennal units and ±2 for cercopod setae and ±3 for telsonic spines. Rostra thick-narrow, proportions in the cercopod seem relatively invariant. These characters are slightly different from what Dakin’s diagrams of male structures show, but within typical levels of variability.

Differential diagnosis. The egg with its deep polygonal structure is unique among Paralimnadia   . Other Paralimnadia   with cercopod setae short and fewer than 10 include P. stanleyana   , P. hyposalina   n. sp., P. monaro   n. sp., P. multispinosa   n. sp., and P. saxitalis   n. sp. Paralimnadia stanleyana   is separated by having variable length cercopod setae and a large projection at the mediodistal corner of the hand. Paralimnadia hyposalina   n. sp. has a much smaller projection and has spines at lower palpomere junctions; P. monaro   n. sp. also has these palpomere spines and both large palps with an incompletely annulated second palpomere, P. multispinosa   n. sp. has>22 telsonic denticles and an inermic section of the basal part of cercopod and P. saxitalis   n. sp. has only 7 first antennal lobes and also spines at lower palpomere junctions.

Remarks. Dakin’s (1914) description and diagrams of this species could be applied to many species of Paralimnadia   , certainly to those with a robust triangular male rostrum, a typical Paralimnadia   clasper, a telson with about 20 telsonic spines and few cercopod setae. Unfortunately, the syntypes in the Western Australian Museum (C339, 3 specimens) have disintegrated and are beyond study. There are just two clues to its identity. The first is the few (four in Dakin’s 1914: pl. 1, fig. 12) short cercopod setae. The second clue is the type locality is Cannington near the Swan River, Perth. Two collections from the sandy coastal plain of Perth and likely to be similar to the site at Cannington (now urbanised) are available and thought to be of this species (and certainly not of other described species). A neotype has been erected from one, and two other collections from further south in Western Australia also contain similar specimens.

Distribution. To date, Paralimandia cygnorum   is known mainly from coastal sandy locations, from about Perth to Esperance ( Fig. 4 View FIGURE 4 ). 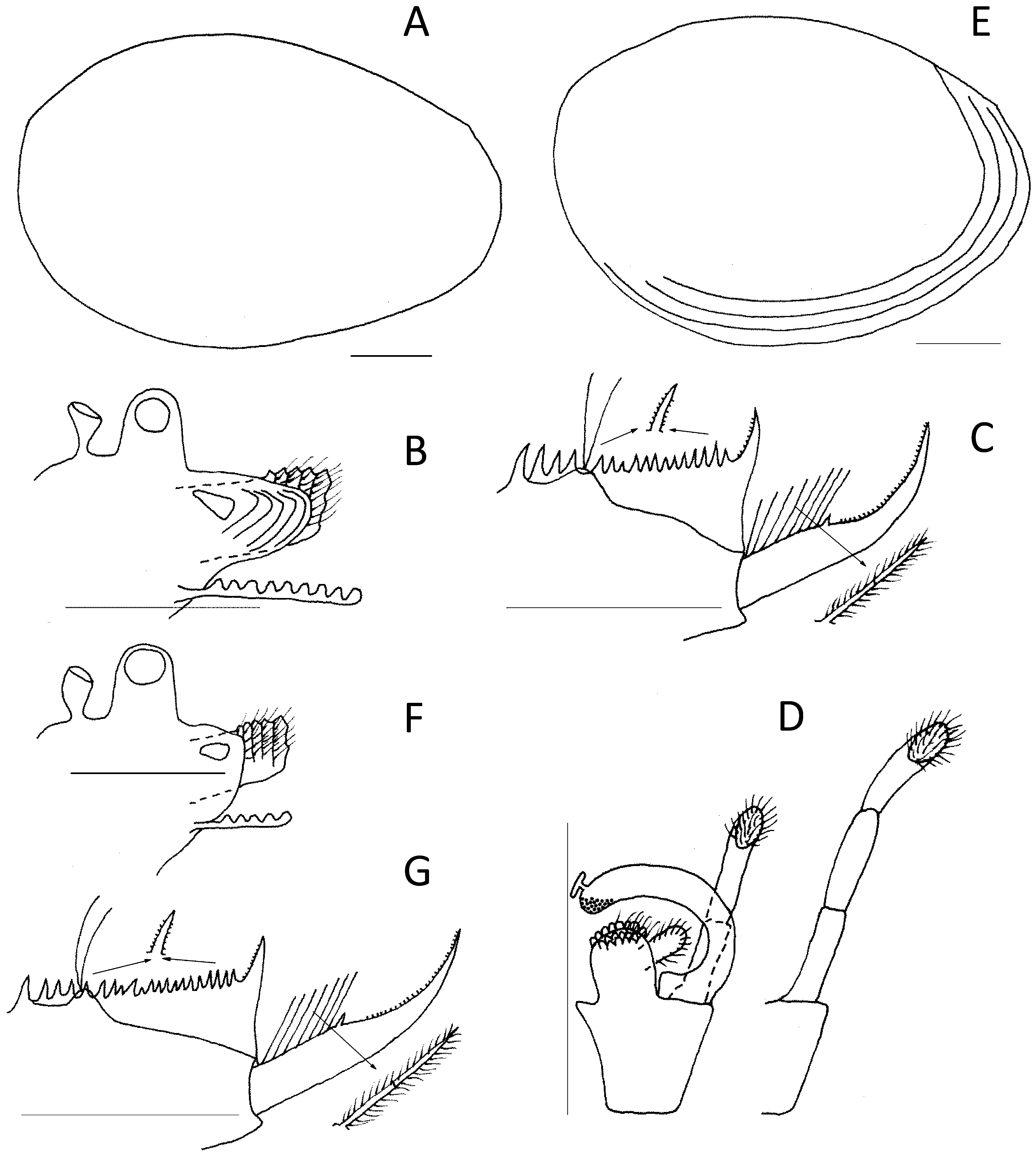