Etymology. As this species lives in the highlands of the New England district in northern New South Wales, the specific name of ‘montana’ from the Latin ‘montanus’ meaning mountains is appropriate.

Diagnosis. Egg cylindrical, generally with two bands of ridges and grooves separated by flared lamellae. Male with a broadly triangular rostrum protruding subequally with the ocular tubercle but at 110° to the rostrum. About 12 telsonic spines. Cercopod with about 9 spines almost inerm on its basal half, length less than cercopod basal diameter.

Description. Male: Head ( Fig. 18 View FIGURE 18 B) with ocular tubercle prominent, compound eye occupying about 50%. Rostrum protruding subequally to ocular tubercle and at right angles from its base, triangular so 110° angle between frons and dorsal surface of rostrum. Ocellus slightly smaller than compound eye and lying at base of rostrum. Dorsal organ posterior to eye by about half its height, pedunculate and asymmetrical and about threequarters height of ocular tubercle.

First antennae ( Fig. 18 View FIGURE 18 B) about twice length of peduncle of second antennae; with 7 lobes, each with numerous short sensory setae. Second antennae with spinose peduncle and both flagella with 11 antennomeres; dorsally with 0–2 short spines; ventrally with 0–4 longer setae. Distal antennomeres with minimal spines and maximal setae.

Telson ( Fig. 18 View FIGURE 18 C) spine ridges with about 12 pairs of spines, all spaced and half to threequarters height of first spine. Spines with spinules. Telsonic filaments originating from mound a little higher than floor of telson and positioned near fourth spine. Floor of telson posterior to mound sloping with steep declivity posterior to mound, then with slightly convex surface to base of cercopod. Cercopods almost as long as spinal row of telson, basal 50% hardly narrowing to small spine then tapering to acute apex. About 9 short stout spines, each with occasional setule on basal half and many tiny denticles dorsolaterally on apical half. Ventroposterior corner of telson hardly protruding, rounded, with few short denticles.

Female. Head ( Fig. 18 View FIGURE 18 F) with ocular tubercle prominent; compound eye occupying about 70%. Rostrum a rounded bulge little less prominent than ocular tubercle and with middle basal part occupied by ocellus, about 60% size of compound eye. Dorsal organ posterior to eye by about its height, pedunculate and asymmetrical and not as high as ocular tubercle

First antennae ( Fig. 18 View FIGURE 18 F) a little shorter than peduncle of second antennae, with 5 small lobes each with many short sensory setae. Second antennae as in male.

Telson ( Fig. 18 View FIGURE 18 F) as in male, though with about 19 pairs of posterior row spines, otherwise with cercopod similar.

Variability. While the rostrum of the head in both sexes varies little, the size and placement of the dorsal organ is not always as indicated for the types when specimens examined in other collections. Still the dorsal organ is always shorter than the ocular tubercle and placed no further away than its height. First antenna lobes vary by ± 1, as do the number of antennomeres. The carapace is not always cream coloured, being almost pellucid in the Emu Rock Tarn populations. Claspers vary little between individuals and populations, with the long palps always with two palpomeres and inerm. However telsonic spines vary in number (± 2) and shape, with females always with more. The unusual spines, instead of setae, on the basal half of the cercopod varied a little in length and numbers (±2) but are always shorter than the basal cercopod diameter.

Differential diagnosis. As in other Paralimnadia   , the egg is unique with its two rings of ridges and grooves demarcated by frilly collars. The spines instead of setae on the cercopod are also unique, though there is a species in the P. urukhai   complex similarly endowed, though in that population the spines are very short (Timms & Schwentner, unpublished data). Paralimnadia montana   n. sp. is the only Paralimnadia   to have both clasper long palps with only two palpomeres.

Distribution and ecology. This species is known from only three sites in New England, New South Wales ( Fig. 4 View FIGURE 4 ), but was probably far more common before European settlement after which many sites with temporary waters were drained or converted to permanent waters ( Haworth 1994), particularly on the basalts of the Guyra district. For instance, I remember the occasional presence of a ‘ Limnadia   ’ in Billy Bung Lagoon near Llangothlin in the 1960s, but in repeated attempts since 2001 have not found any clam shrimps there.

Like many other clam shrimps, the presence of P. montana   n. sp. in a site is erratic. I have visited Glencoe Lagoon one to three times every year 1995–2015 and found it only three times. 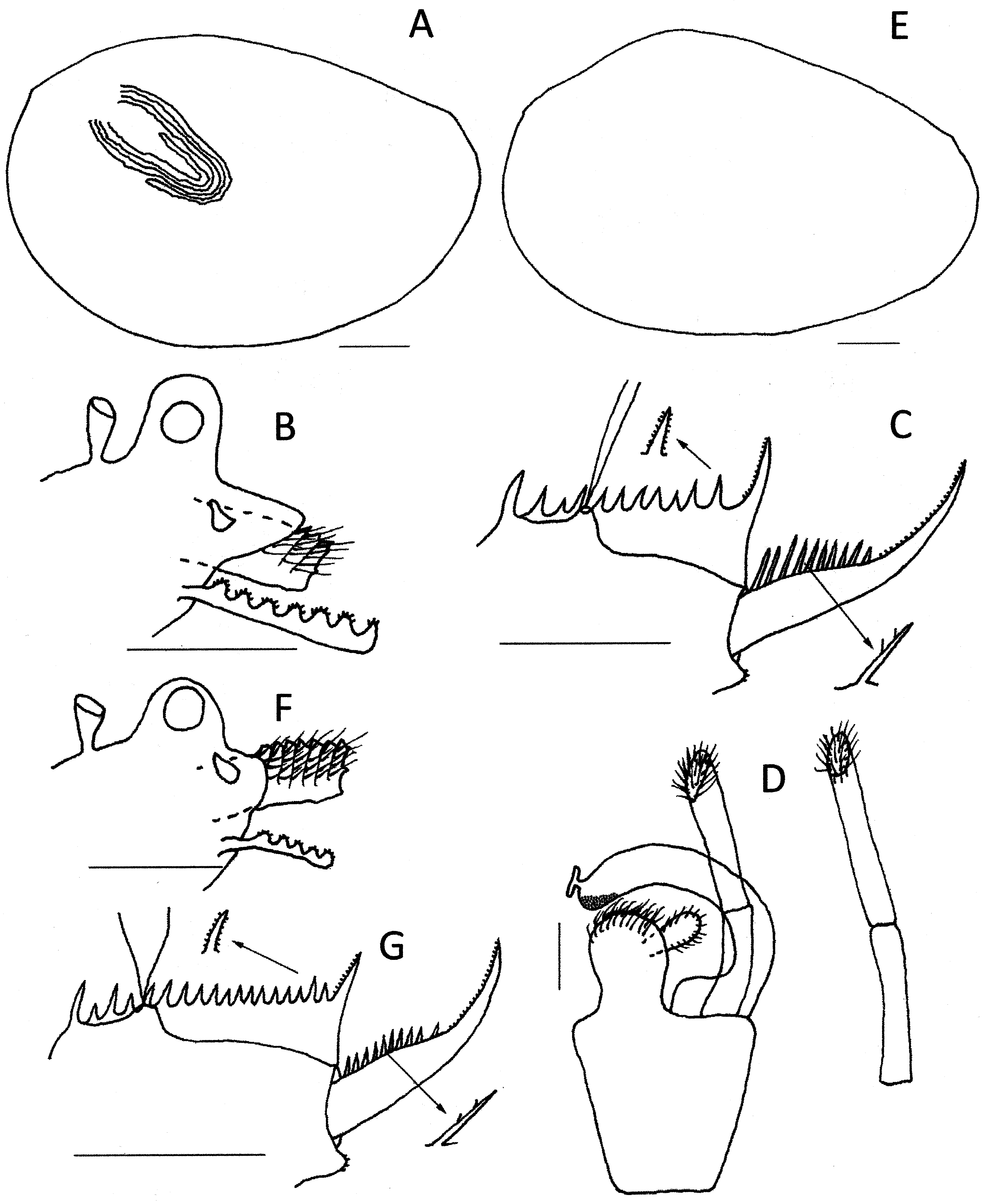