Fins yellowish with interradial skin hyaline and small darkbrown blotches on its rays. Blotches of distal margin of caudal fin very expanded and jointed over interradial skin, forming one bar occupying only its distal third. Caudal fin with darkish base.

Distribution and habitat. Rineloricaria maacki is known from middle and lower rio Iguaçu, a tributary of the rio Paraná basin ( Fig. 6 View Fig ). This species inhabits the main channel and 364 Two new species of Rineloricaria from the rio Iguaçu basin finding consistent diagnostic characters to describe them. Those two species can only be assigned at present to a generic description of Rineloricaria lima , which is taxonomically problematic (see below).

The specimens mentioned by Reis & Cardoso (2001) were not available for examination during the present study. However, information provided by Wolmar B. Wosiacki (MPEG) indicates that the lot MCP 17455 View Materials examined by those authors is composed by at least one of the two new species assigned as Rineloricaria sp. aff. lima by us. This species was also cited by Vitule & Abilhoa (2003) for rio Piraquara (a headwater river of the rio Iguaçu basin), and it was part of a series of specimens cited by Ingenito et al. (2004) for upper Iguaçu basin (MHNCI 9133 and MHNCI 9212). The fishes assigned here to Rineloricaria sp. aff. lima are widely distributed in the river basins rio Piraquara, rio Negro and rio da Várzea, and are sympatric to R. langei in the rio Iraí. Moreover, comparisons carried out by us with Rineloricaria specimens from coastal drainages indicate that Rineloricaria sp. aff. lima seems to be widely distributed along the coastal drainages of Paraná State, where it is found with a new species under description by us, which is characterized by having a short body and naked thoracic and abdominal regions.

Rineloricaria lima , the type species of the genus, was collected by Johann Natterer from “Brazilian rivers” during the 18 years that he lived in Brazil (1817-1835) (Riedl-Dorn, 2000; Vanzolini, 2004). The type specimen of R. lima has been lost and the original description, which was based on a dry specimen, is poor and characterizes most of species of the genus. With the loss of the type specimen of R. lima ( Isbrücker, 1979) , and the extensive nature of Natterer’s travels (including the Amazon basin, rio Paraguay, rio Paraná, rio Paraíba do Sul, and to the cities of Curitiba (rio Iguaçu) and Paranaguá (coastal Atlantic drainages of Paraná State)), it is not easy to associate any specimen to this name until the designation of a neotype, what is beyond the scope of this paper.

The absence of ventral plates observed in R. maacki is widely variable among loricarids, but among species of Rineloricaria sensu lato this character is restricted to species from the rio Paraná basin ( R. latirostris , R. maacki ), rio Uruguay ( R. misionera , R. setepovos , R. anhaguapitan , R. reisi , R. capitonia , and R. tropeira ) and coastal drainages from southeastern and southern Brazil ( R. aequalicuspis , R. maquinensis , R. malabarbai , R. baliola , R. microlepidogaster , and an undescribed species from Rio de Janeiro State). This character is not exclusive to Rineloricaria but can be an indicative of common ancestry between some species from geographical range cited above, as suggested by Ghazzi (2008), and proposed by Isbrücker et al. (2001), Ferraris (2007), and Rodriguez & Reis (2008). However, such a hypothesis requires a phylogenetic analysis of the members of Rineloricaria , what is also beyond the scope of the present study. The distribution of Rineloricaria species having a naked ventral area may also indicate close biogeographic relationship among Paraná and coastal Atlantic drainages through rio Iguaçu, that strengthens the hypotheses of Ingenito et al. (2004) and Torres et al. (2008). Such hypotheses also may explain the morphological similarities among R. langei and R. quadrensis .

The species herein described do not corroborate the statement proposed by Rodriguez & Reis (2008), who recognized two ecomorphological groups of Rineloricaria inhabiting sandy or rocky habitats. Both R. langei and R. maacki inhabit mostly sandy environments. However, the two new species have the naked area of the tip of snout not reaching the most anterior pore of the infraorbital ramus of sensory canal, which was reported to be a characteristic of the “rocky group” according to Rodriguez & Reis (2008). Such incongruence also occurs in some of the species assigned by those authors to the “sandy group” (e. g. R. kronei , R. misionera , R. quadrensis , R. steindachneri , and R. strigilata ). Moreover, the presence of the mid-dorsal series of lateral plates in R. maacki , a character of the “rocky group”, also contradicts those authors’ statement. The variation evidenced here may indicate that such characters are not informative to distinguish the “sandy” and “rocky” species groups, or that the morphological characters proposed by Rodriguez & Reis (2008) are not associated to specific habitats. 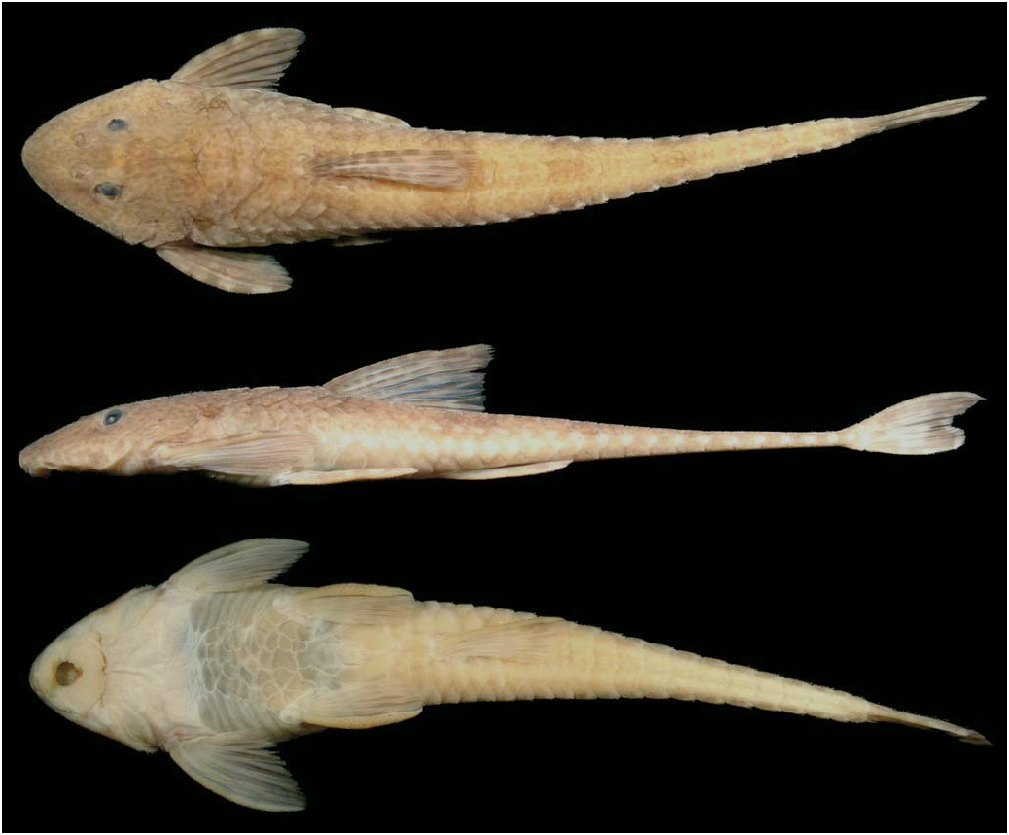