This species is named in honor of Rolf Klee for his dedicated career on Stephanodiscaceae .

Valves strongly undulated externally ( Figs 25–26 View Figs 25–32 ). Cingulum present, consisting of an open valvocopula and several copulae ( Figs 27–28 View Figs 25–32 ). Valve surface is irregular with sprinkled granules and prominent embossed ribs. The marginal striated area is circumferentially undulated with numerous granules; the mantle is gently sloping ( Fig. 27 View Figs 25–32 ). Striae consisting of 3–4 rows of finely aligned areolae alternating with reduced hyaline interstriae bearing near the valve margin big rounded openings corresponding to the external openings of marginal fultoportulae ( Figs 27–28 View Figs 25–32 ). The central area displays a steep tangential undulation ( Fig. 29 View Figs 25–32 ). If the junction between the valve face and the mantle is steeply marked vertically both on the elevated and depressed sides ( Fig. 30 View Figs 25–32 ), horizontally, from the elevated to depressed parts, the incline is smooth and gradual. On the internal side of the marginal area, striae become single rows of large rounded to oblong areolae that progressively become smaller and arranged to some extent into a stellate pattern ( Fig. 31 View Figs 25–32 ). Where ribs are fusing, external areolae are bigger and occluded by volae. Broken specimen displays a simple valve structure: a basal siliceous layer composed of anastomosing ribs starting from a central hollow and continuing to the valve rim where intercostal spaces are covered by a finely perforated silica layer ( Fig. 32 View Figs 25–32 ).

Internally, there is no central lamina inside the valve (Fig. 33). Costae are strongly silicified and elevated, extending from the valve rim to the valve center and fusing into a thick silicified hollow (Figs 34–35). The alveolar structure could be classified as complex as the alveolus bears in its middle a recessed / sunken costa that carries the marginal fultoportula (mfp) (Fig. 36). As such, mfp are located on every second striae and are composed of one tube and three satellite pores (Figs 37–38). The ring of mfp and rm stands just beneath marginal lamina. One single rimoportula (rm) positioned on a recessed costa consisting of a short tube with a tangential slit that is always diametrally opposed to the raised side (Fig. 39). One single valve face fultoportula (vffp) – composed of one tube and three satellite pores – is always diametrically opposed to the rimoportula (Fig. 39). It appears eccentric since positioned on the raised part (Fig. 40). The external opening of the vffp is difficult to observe as it is positioned on the external slope of the raised central part (see in Fig. 26 View Figs 25–32 ).

The strongly tangentially undulated valve is a character shared by Cyclotella and Pliocaenicus Round & Håk. , the latter genera being included into Lindavia by Nakov et al. (2015). The position and structure of mfp are also a common character. But unlike in some Cyclotella or Pliocaenicus , no domed criba are observed internally in Cyclocostis gen. nov. As the position of the rm within the ring of mfp in C. rolfii gen et sp. nov. differs from Pliocaenicus , it rules out its belonging to this genus.

The alveoli of C. rolfii gen et sp. nov. could be classified as complex, because there is a median fultoportula born on a recessed costa. However, structurally they are simple since not partially occluded by central lamina and widely open towards the valve center. The structure of alveoli of C. rolfii gen et sp. nov. rather corresponds to some extent to the marginal chambers defined by Lange & Syvertsen (1989) as “a marginal space characterized by an opening on the inside of the valve encompassing two or more alveolus openings that is limited by coarse interstriae”. These marginal chambers are present in Cyclostephanos novaezeelandiae (Cleve) Round in Theriot et al. (1987) or C. dubius (Hust.) Round in Theriot et al. (1987) . However, the genus Cyclostephanos Round is largely heterogenous in terms of frustule morphology as it includes species with and without alveolar chambers. Except the marginal chambers, C. rolfii gen et sp. nov. shares no other characters with the genus Cyclostephanos . 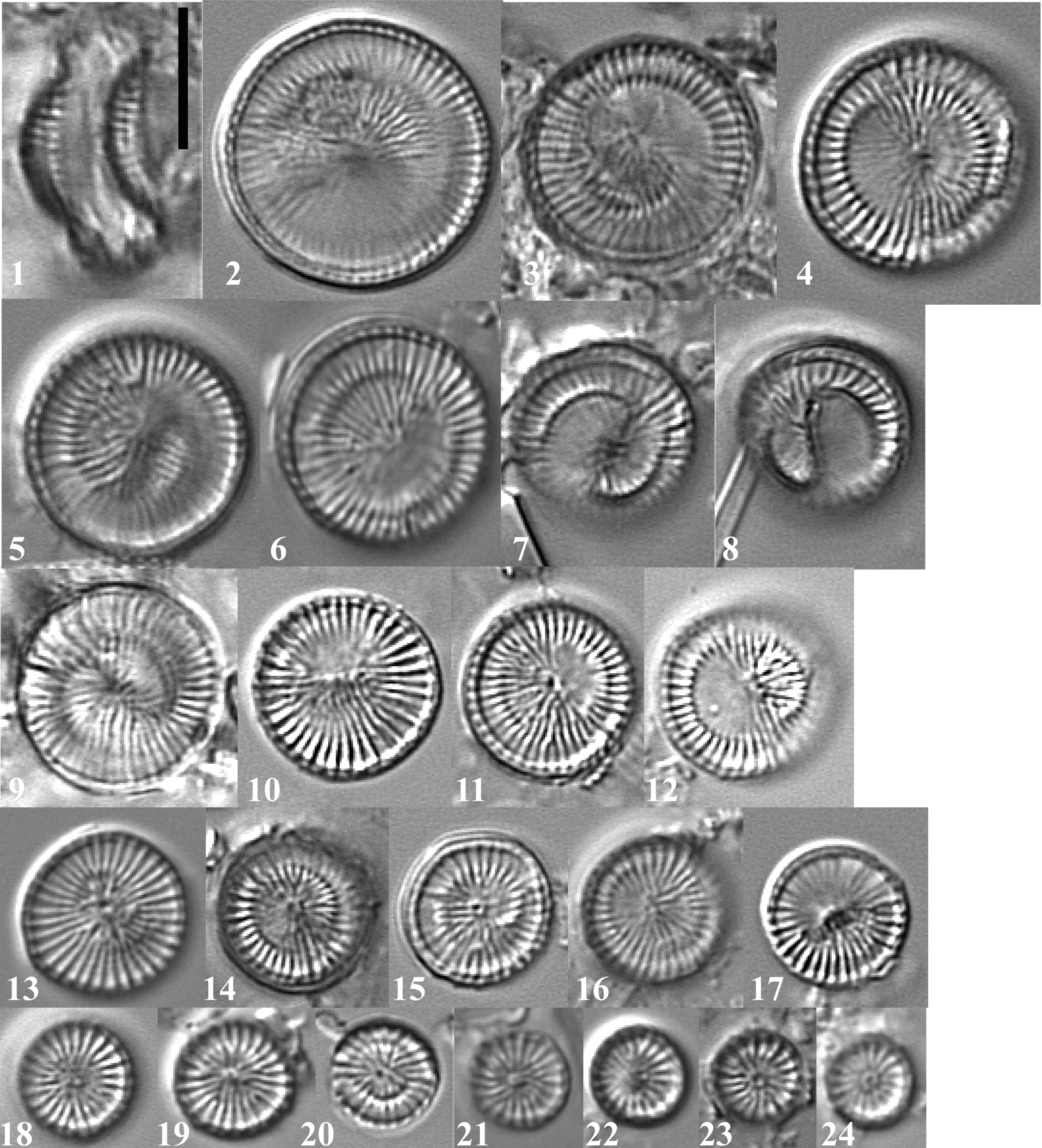 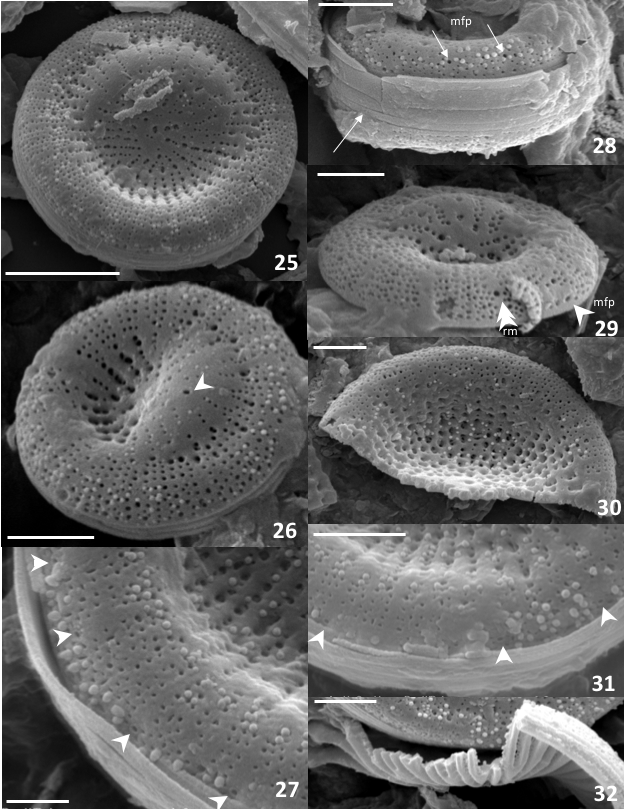