Redescription. Female. Head, legs, anterior half of the pronotal disc, tegmina and thoracic sternites chocolatebrown ( Fig. 11AView FIGURE 11). Tegmina with a yellow spot on the base and another ovoid spot, near the tip ( Figs. 11CView FIGURE 11, 12CView FIGURE 12). Thoracic pleura, lateral lobes and distal half of the pronotum bright green; thoracic tergites black; abdomen and hind tarsi cream-whitish. Hind wings dull brown with greenish-yellow venation (coloration data see in some additional specimens; in female lectotype they did not keep very well). Head elongate, globose eyes and protruding notoriously towards the sides of the cephalic capsule ( Figs. 11BView FIGURE 11, 12BView FIGURE 12), fastigium of vertex rounded and not prolongated, vertex medially much lower than the dorsal surface of the eyes; frontal costa short and very narrow scutellum, in side view highly arcuate in the lateral carinae region; dorsal carina of frontal costa moderately pronounced between the eyes ( Fig. 11BView FIGURE 11). Pronotum flat, extending beyond the abdomen. prominent and curved spine which covers a great deal of the vertex; median carina continuous, slightly elevated from the anterior margin to the tip; lateral lobes of the pronotum square-shaped, with a rounded lower margin and converging into the lower margin in a triangle. Tegmina short, with a round, apical or subapical, and a more diffuse proximal spot ( Figs. 11CView FIGURE 11, 12CView FIGURE 12). Legs slender, compressed; fore femora indistinctly sulcate above for dorsal edge, with a short external dorso-apical spine; mid femora with a well-developed carinae, and with an internal, dorso-apical spine; ventro-apically; hind femora with two or three lobes along the dorsal edge ( Fig. 2IView FIGURE 2). Abdomen cylindrical, with no sternal or tergal modification. Subgenital plate with a broad, shallow emargination, medially subtruncate ( Fig. 11FView FIGURE 11); dorsal ovipositor valves narrowing distad and apically upturned ( Fig. 11EView FIGURE 11).

Variation. According to the examined specimens, the lobes of the dorsal margin of hind femora are more prominent in Peru populations than those of Amazonian Brazil, and these lobes tend to be more prominent in females. A male specimen, photographed by Rob Westerduijn, has an anterior spine thicker than usual in stark contrast with the specimens available (three times wider than normal).

Distribution. Colombia, Brazil and Peruvian Amazon. Bruner (1910) reports this species for Santarem, Para, Brazil, but unfortunately he failed to specify the number and sex of the specimens; the same author, ten years later ( Bruner, 1920), reports a female (C.M. Acc. No. 6008) from Bolivia, “Rio Japacani”, with dubious ID; the specimen could not be located, so we are not including it for the distribution range. Liebermann (1955), mentions that the species is distributed in Santarem, citing the original description, which is mistaken. Perhaps Liebermann meant Bruner (1910).

Comments. In the original description Hancock reports a male and a female, but apparently the male was lost and was not reported not inventoried in the ANSP type specimen list ( Otte, 1979), so we describe the male here and we designate the only female that could be located as a lectotype (Art. 74 ICZN). The female lectotype is in good condition, with only the left mid-leg and right tarsus missing. 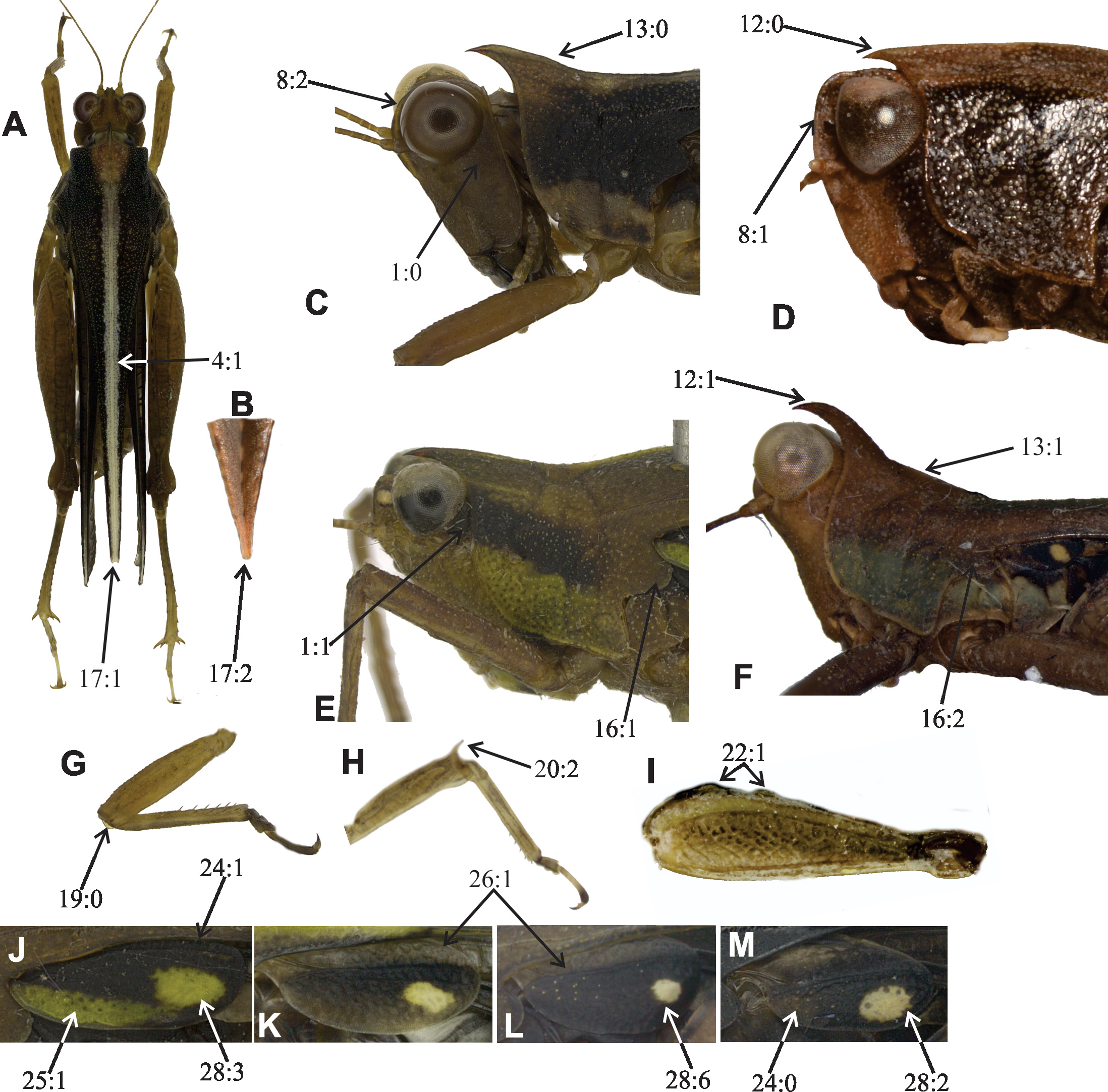 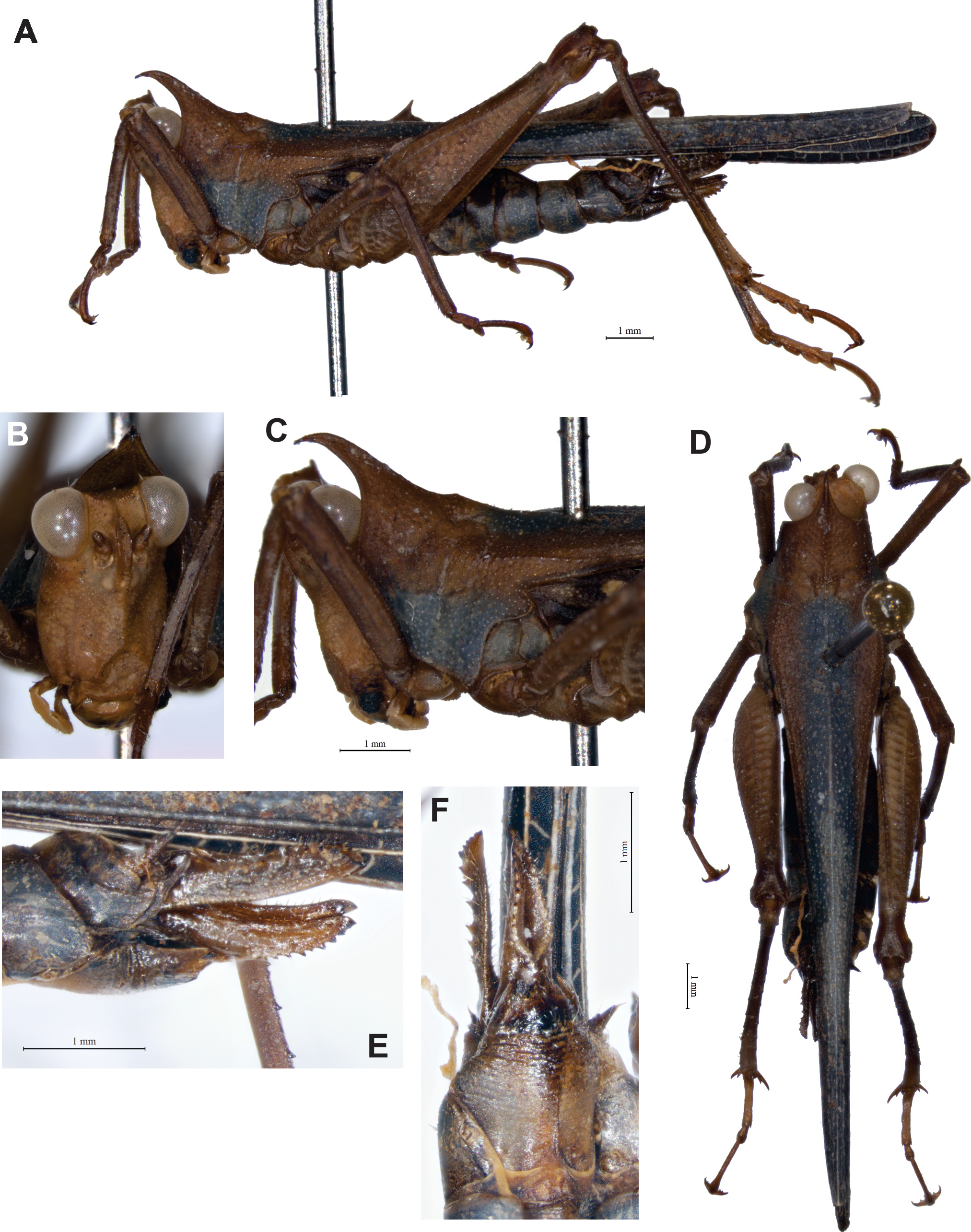 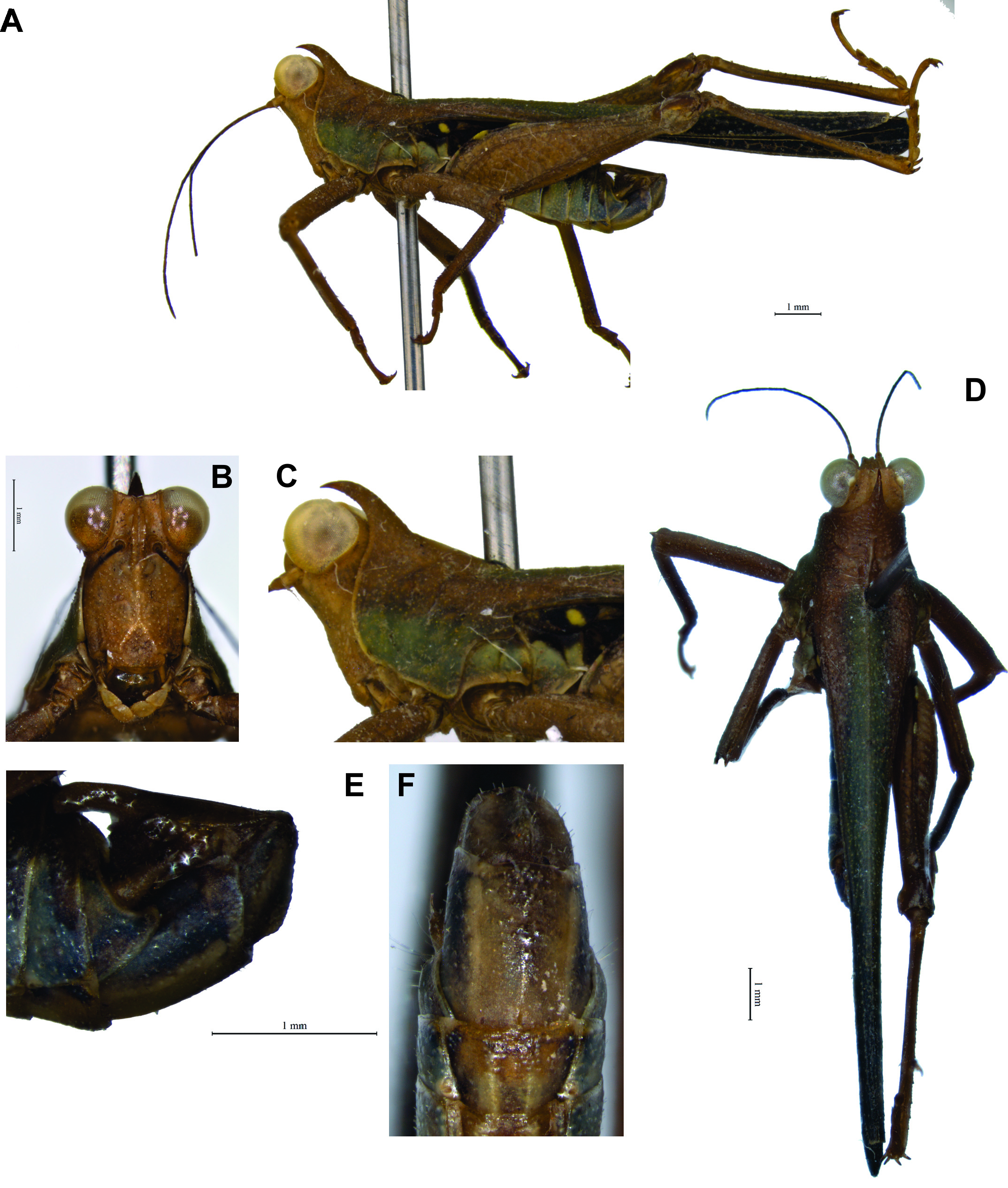 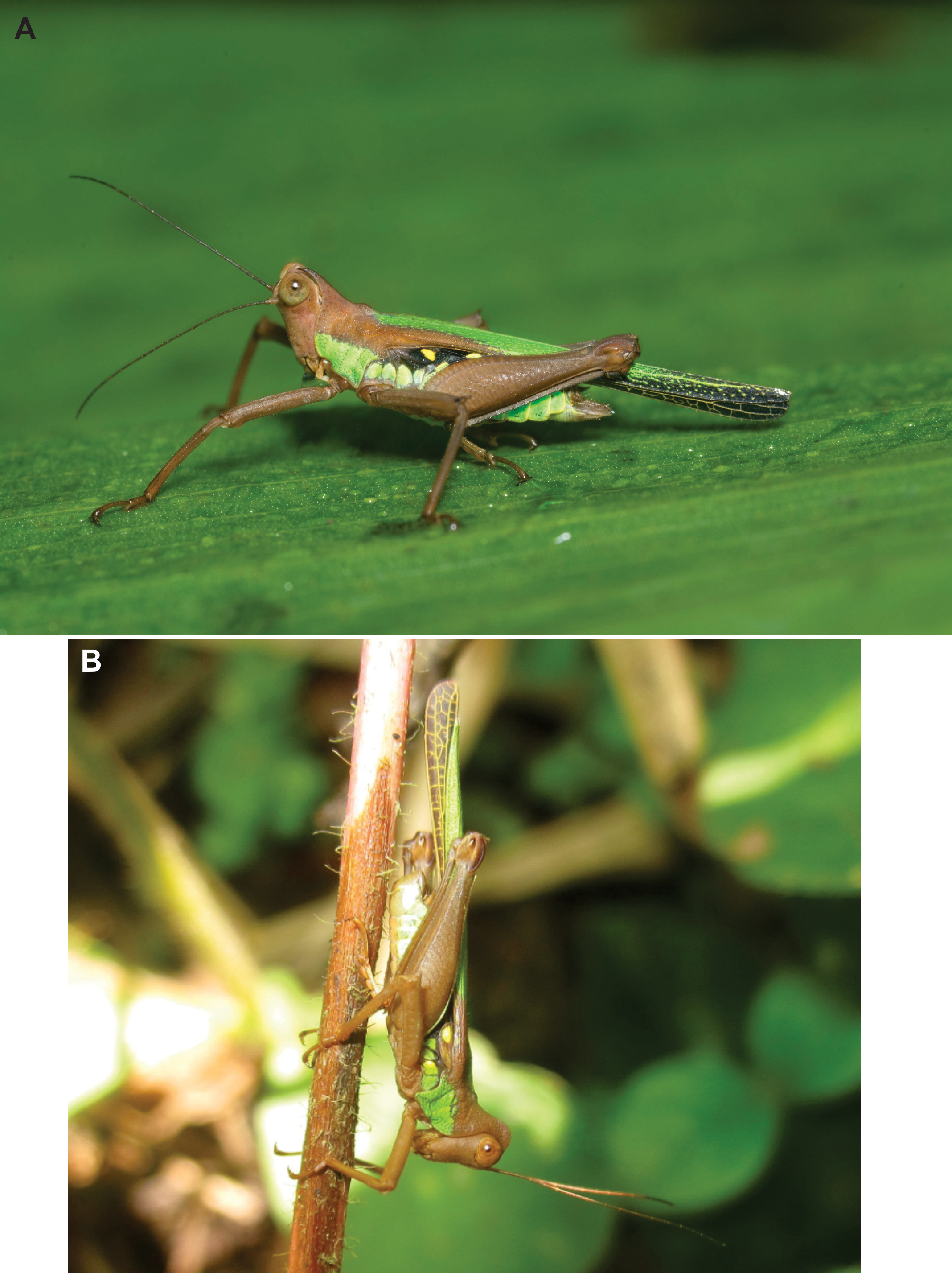