Male ( Fig. 4 View FIGURE 4 a–c, f, i). The fastigium verticis is short, tapering to the tip, half the width of the scapus. Antennal joints dark in their base, thus antennae look with dark and light rings. The pronotum is constricted in the middle, proand metazone widening fore- and backeards, respectively, hind margin of metazone concave. The mid sulcus passes before the middle of pronotum. The lateral plates of pronotum have rounded corners. The acoustic stigma has large aperture. Half of tegmina are covered by pronotum, comparatively small, with slight excision at the medial (anal) edge. The stridulatory area is bulged over the costal area and has pronounced strongly chitinized venation. The stridulatory vein is covered by the pronotum, massive and long. The stridulatory file ( Fig. 4i View FIGURE 4 ) measures 2.56 mm in length (shortest distance between ends) and 0.12 mm in its widest point. The file bears 132 teeth, clearly separated to a basal part of 1.34 mm with 45 wide, sparse teeth, enlarging towards the middle, and an apical part of 1.34 mm with 87 finer dense teeth. Both parts are separated by a step-like descent from the basal to the apical part.

Legs quite long, fore and mid femora much longer than pronotum (ca. 7.7–8 mm). Hind femora lack spines on their ventral keels. Hind margins of the abdominal tergites are not protruded. The epiproct is broader than long. The cerci ( Fig. 4f View FIGURE 4 ) are comparatively long, slightly incurved, tapering almost to the tip, when they are strongly incurved and widened. Their apical part ends with a short, wide, decurved spine spine. The subgenital plate is short, slightly tapering to the tip, where it has a shallow rectangular incision.

Coloration. The body of the dried specimens is pale, yellowish, though living animals are possibly fresh green or yellowish-green with large rusty-brown speckles. A thin whitish band passes along the middle of the vertex, occiput and the distal part of tergites. The sides of metazone are bordered by a reddish band. Pale light bands pass over the sides of the reddish band of pronotum and continues on the abdominal tergites, where it is much sharper and bordered by black on both sides. The tegmina are yellowish with dark stridulatory area on which yellow veins are sharply visible. All femora with dark colored ventral keels.

Female ( Fig. 4d, e, g, h, j View FIGURE 4 ). The fastigium is wider than in the male – almost as wide as scapus. The pronotum is almost cylindrical, longer then in male, with a long metazone, almost entirely covering the large tegmina. The tegmina ( Fig. 4e, j View FIGURE 4 ) are roundish, the left tegmen bearing a well-developed stridulatory apparatus with at least four proximal rows of parallel spines and a large distal area of circular spines. The epiproct is broader than long. The cerci are conical, in- and decurved, slightly longer than the epiproct. The subgenital plate ( Fig. 4g View FIGURE 4 ) is half as long as wide, widely rounded, with a small triangular projection at the apex. Ovipositor short with the basal fold of the upper edge of lower ovipositor valve (lamella) forming typical roundish projection ( Fig. 4h View FIGURE 4 ).

Coloration. Similar to the male.

Diagnosis. Bey-Bienko (1954) compares this species with P. thoracicus ( Fieber, 1853) , rejecting close relationships between both due to the difference in the coloration of male tegmina. On the other hand, the shape of male pronotum and cerci, the long legs, the structure of male tegmina and especially of the stridulatory file suggest closer relationships with P. schmidtii ( Fieber, 1853) and partly with some members of the Poecilimon heroicus Stshelkanovtzev, 1911 species group ( Heller et al. 2006). The area of distribution of the latter taxa opposite to that of P. stschelkanovzevi at the western side of the Caspian Sea and the close relationships between P. schmidtii and the Poecilimon heroicus group ( Ullrich et al. 2010) may further support that hypothesis. 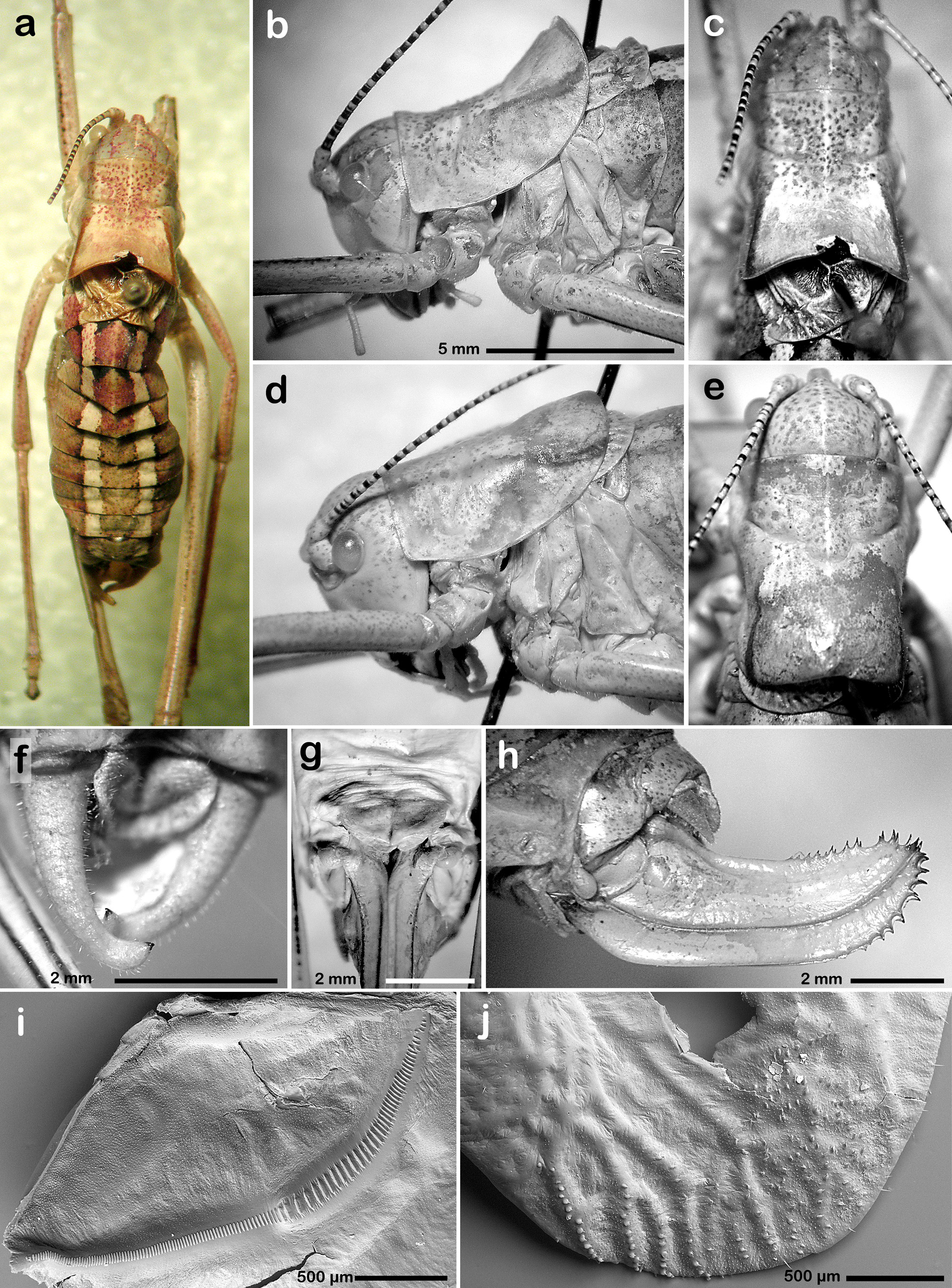