Radial shields covered by very small granules. Naked adoral shields, longer than broad. First ventral arm plate large and rhombic. Up to 6 arm spines, very large and slender; the dorsalmost is the shortest and the ventralmost is much larger than the rest, overlapping the tentacle scales of the contiguous segment. Adradial tentacle scale almost double in size of abradial one. In vivo coloration: disc orange with dark blotches, arms with transverse brown bands.

DD = 21.1 mm; 5 arms, LA = 147.7 mm. Disc flat and rounded. Dorsal disc densely covered by rounded and fine granules, which are very close together, granule density 182 mm-2; granules extend to base of arms. Some granules rubbed off in some areas of disc. Radial shields completely covered by granules ( Fig. 7AView Fig). Interradii covered with granulation, similar to on dorsal disc ( Fig. 7BView Fig). Four genital slits on each interradius; proximal and distal genital slits elongated; distal genital slits surrounded by granules and few scales that are next to side of lateral arm plates ( Fig. 7BView Fig).

In the original description of O. pentacanthum, H.L. Clark (1917)  designated an uncatalogued specimen as “heliotype” (= holotype), including four additional specimens, but a proper designation of the type material (including catalog numbers) was lacking at that moment. Downey (1969) considered the specimen USNM E726 (DD = 27 mm) as paratype, not recognizing it as the holotype in spite of a museum label marking it as type material by H.L. Clark (pers. comm. Pawson, 2020), also not considering the illustration already included in the original description. However, according to the International Code of Zoological Nomenclature ( ICZN 1999), Articles 73.1.2 and 73.1.4, the described and illustrated specimen which corresponds to USNM E726 should be treated as the holotype. During the revision of the paratypes only two specimens were found: MCZ OPH-4519 and USNM E9798. The labels of the paratype USNM E9798 indicate the presence of two specimens, but the lot includes only one. Therefore, two specimens are “lost”, one that is part of USNM E9798, and a second one whose catalog number is unknown, but in case they are found, they must be treated as paratypes.

All the morphological characters of the holotype, paratypes, and voucher specimens correspond with the original description by H.L. Clark (1917); nevertheless, we observed other relevant characters. H.L. Clark (1917) coined the named O. pentacanthum  based on the number of arm spines (five), but we observed that most of the examined specimens (MCZ OPH-4519, MZUCR-ECH 1413, MZUCR-ECH 1414) had up to six arm spines. It is important to mention that the low number of arm spines is one of the most important diagnostic characters for this species since O. pentacanthum  is the only Ophioderma  in the Eastern Pacific having up to six arm spines, while the rest of its congeners have more than eight. Another important characteristic that has not previously been mentioned is the elongation of the genital slits ( Fig. 7View Fig G–H, J), which is not found in other Ophioderma  from the Eastern Pacific; perhaps, the large elongation of these genital slits is due to the large size of the specimens, but this must be confirmed when more data from specimens of different sizes is obtained. One of the most remarkable features of O. pentacanthum  is the paired and large pores between the most proximal ventral arm plates. The paratype MCZ OPH-4519 ( Fig. 7GView Fig) presents them on at least the first six arm segments, but they cover ¼ of the arm in the Costa Rican specimens ( Fig. 7View Fig H–K). Furthermore, the observed pores in such specimens are extremely large (occupying most of the proximal portion of the ventral arm plates) and elongated in the first segments ( Fig. 7H, JView Fig), decreasing in size and becoming more rounded towards the medial ( Fig. 7I, KView Fig) and distalmost part of the arm. The reason why H.L. Clark (1917) did not observe these pores could be related to the smaller size of the type material (MCZ OPH-4519, DD = 21.1 mm) in comparison to the specimens from Costa Rica (MZUCR-ECH 1413, DD = 23 mm; MZUCR-ECH 1414, DD = 26.8 mm). Taking into account all the nominal species, it seems that smaller specimens of Ophioderma  tend to have reduced and fewer pores (or even absent) in the ventral part of the arm, whilst larger specimens can have larger and more numerous pores being a characteristic inherent of growth; this agrees with observations made by Nielsen (1932). Nevertheless, more specimens are necessary to review and compare to corroborate this assumption and to determine whether the pores have any functional importance in the organisms (pers. com. Stöhr & Granja-Fernández, 2017). Lastly, it is important to remark that the field notes of the specimens from Costa Rica mentioned that the in vivo color of O. pentacanthum  was orange with brown botches on the disc and arms with transversal brown bands; this is the first record of the in vivo coloration for this species.

H.L. Clark (1917) described this species from the Galapagos Islands but it was subsequently recorded in the Gulf of California, Mexico, and Guatemala ( Ziesenhenne 1955; Solís-Marín et al. 2013). In the review of the genus Ophioderma  by Ziesenhenne (1955), he mentioned that the occurrence of O. pentacanthum  in the Gulf of California (one specimen deposited in the Allan Hancock Collection) was “rare”. Nevertheless, many authors have considered this record as valid ( Maluf 1991; Buitrón-Sánchez & Solís-Marín 1993; Maluf & Brusca 2005; Granja-Fernández et al. 2015a). We reviewed all the LACM Ophioderma  material, where all the material of the Allan Hancock Foundation is deposited, and we could not find any material corresponding to Ziesenhenne´s record. Moreover, in all the other visited collections we did not find any specimens labeled and/or identified as O. pentacanthum  , except for the type material from the Galapagos Islands. Despite the rarity of O. pentacanthum  in scientific collections, the reviewed specimens agree with the distribution in the Southeastern Pacific (Galapagos Islands and Cocos Island) at depths below 100 m (H.L. Clark 1917). Consequently, it is plausible that Ziesenhenne´s specimen does not correspond to O. pentacanthum  but to a similar species (e.g., O. hendleri  sp. nov.). Also, the Solís-Marín et al. (2013) record of O. pentacanthum  from Guatemala is erroneous. Therefore, we suggest that the records from Mexico and Guatemala should be considered invalid. 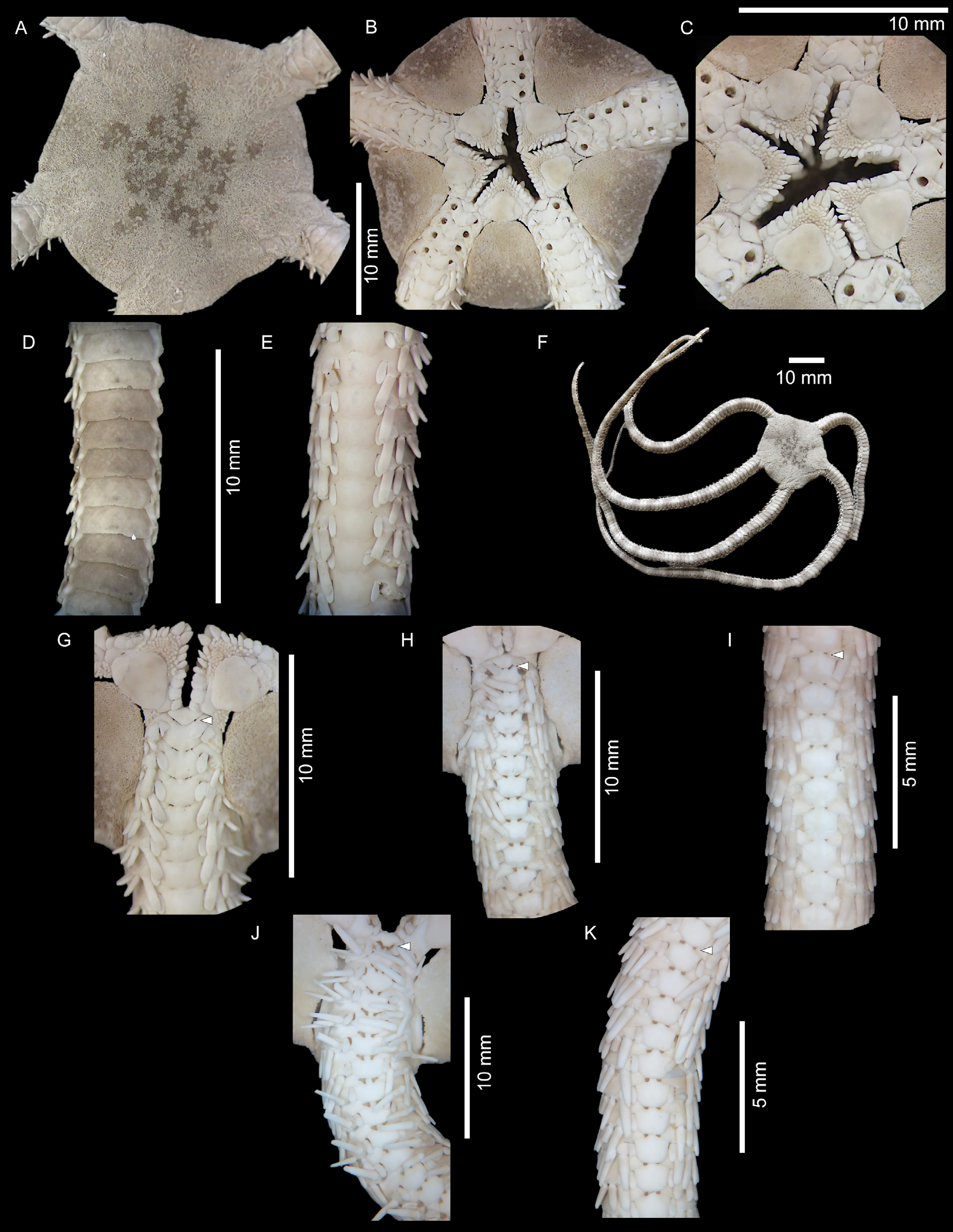