Head alutaceous, with sparse white setae on lower face; nearly rounded, only 1.2× as broad as high and broader than mesosoma in frontal view, 2.0× as broad as long in dorsal view. Gena alutaceous, not broadened behind eye in frontal view, 1/3 width of transverse diameter of eye in lateral view. Malar space alutaceous, without malar sulcus or striae; eye 3.9× as high as height of malar space. Inner margins of eyes slightly converging ventrally. POL 2.0× as long as OOL; OOL 1.3× as long as diameter of lateral ocellus and slightly shorter than LOL; all ocelli ovate, of same size. Transfacial distance as long as height of eye; diameter of antennal torulus slightly longer than distance between them, distance between torulus and eye as long as diameter of torulus. Lower face nearly as high as height of frons, alutaceous, without striae, with white scattered setae. Clypeus rounded, nearly as long as broad, alutaceous, with a few setae scattered all over; ventrally rounded, emarginate, without median incision; anterior tentorial pit small, indistinct; epistomal sulcus impressed, distinct; clypeo-pleurostomal line semi-lunar, impressed, distinct. Frons and interocellar area alutaceous, without setae. Vertex, occiput, postocciput, postgena alutaceous; posterior tentorial pit large, ovate, area below impressed; occipital foramen shorter than height of postgenal bridge; hypostomal carina emarginate, continuing into postgenal sulci which are widely separated and diverge toward occipital foramen, postgenal bridge only slightly broader than high anteriorly.Antenna longer than head+mesosoma, with 12 flagellomeres, scape slightly longer than pedicel; pedicel longer than broad, F1 1.4× as long as pedicel and as long as F2, F2 1.4× as long as F3, F3=F4, F5 to F11 equal in length; F12 longer than F11; placodeal sensilla on F3–F12, absent on F1–F2.

Gall. Sexual galls ( Fig. 225 View FIGURES 224–225 ) are exposed, thin-walled, seed-like, ovoid, brown chambers in buds, catkins, and proximal regions of immature leaf midribs and laminae. Sometimes with a sparse pubescence of fibrous, tan hairs; sometimes these hairs are more abundant as a distal tuft. Adults emerge through holes chewed in the distal half of galls. Aging galls can persist on buds and leaves into autumn. Galls of the asexual generation ( Fig. 224 View FIGURES 224–225 ) on Q. alba are as described by Osten Sacken (1862) and Weld (1922a).

Biology. See Weld (1922a) for the biology of the asexual generation. Galls of the asexual generation became evident on bur oak leaves in Edmonton in July, and were fully mature in September, when many separate easily from the leaf lamina, falling to the ground. Galls are susceptible to drying, and rearing experience suggests that desiccated galls produce no emergents. Females of the asexual generation overwinter and pass the entire subsequent summer in their galls, emerging in late autumn and winter – generally from late October to December with a peak in mid-November, but when a large number of galls was reared over winter 2016-2017 in Edmonton, a small number of females emerged in all months from January through April 2017. Weld (1922a) reared adults in Evanston, Illinois, in March. The brachypterous females were observed in Edmonton to crawl up through any accumulated snowpack, climb bur oak stems, and oviposit in buds. Emergence and adult female activity appeared delayed in autumn during periods of warmer weather, and was observed during a period of sustained temperatures ranging from -10°C to -17°C during early January 2017 in Edmonton. Galls of the sexual generation became apparent in early May in Edmonton, with adults emerging from mid-May through mid-June.

This species has not been previously recorded from Q. macrocarpa ; earlier records are from Q. alba and Q. montana . Another congeneric species, Phylloteras volutellae ( Ashmead, 1897) , is also found on Q. macrocarpa . 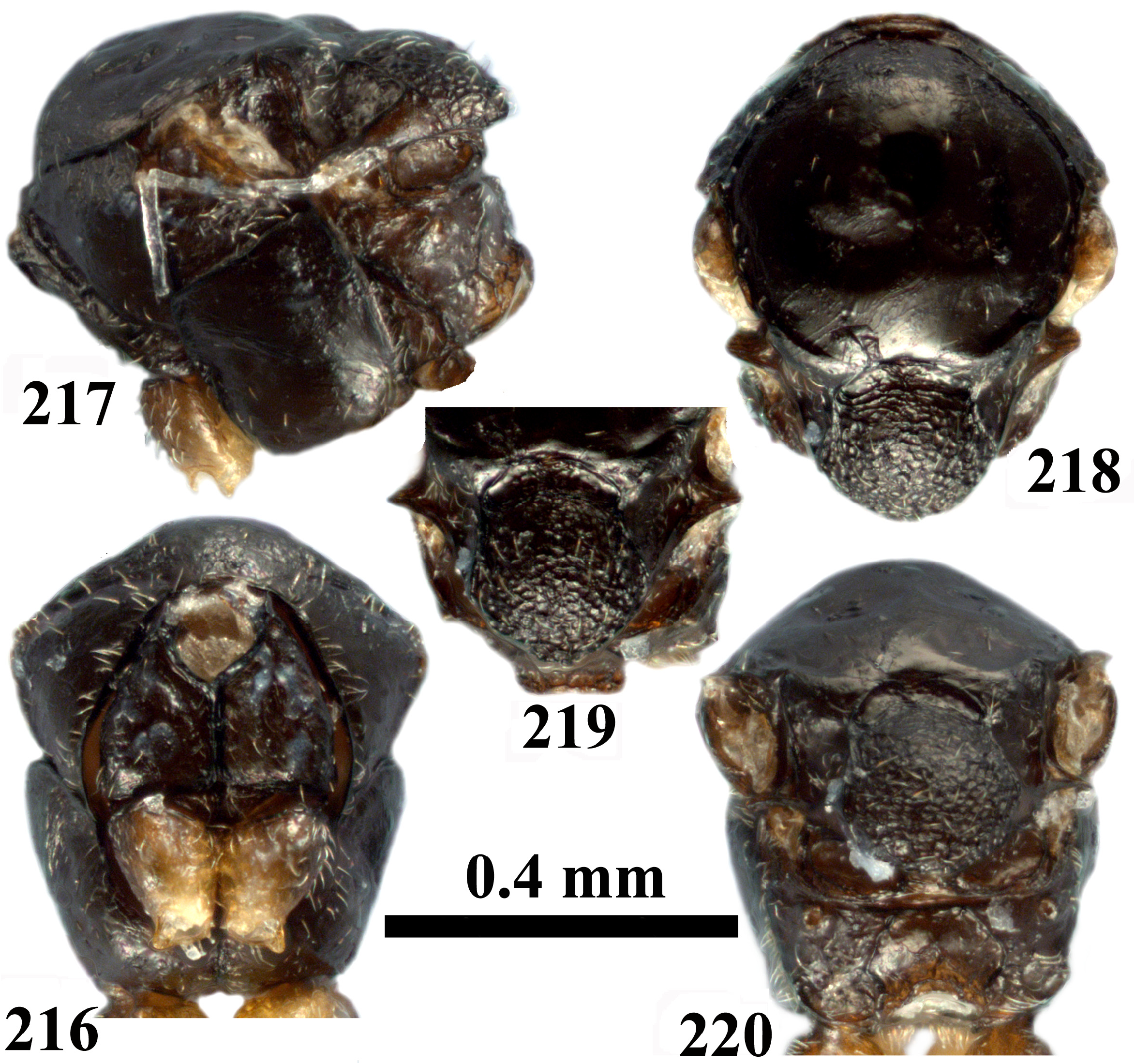