Synonyms: Neuroterus flavipes Gillette 1889: 281 . Male, female and gall. Description reprinted by Gillette (1890: 21). Beutenmüller (1910: 136) suggested that this species should probably be placed in Callirhytis or Andricus rather than Neuroterus . Kinsey (1923: 136) agreed, and left this species unplaced in his revision of Neuroterus . Callirhytis flavipes (Gillette) : combination by Weld (1926: 91). Melika & Abrahamson (2002: 168) considered this species should belong to Andricus , however, this transfer was made only informally, without following the ICZN requirements.

Metasoma as long as head+mesosoma, nearly as long as high in lateral view; 2nd metasomal tergum extending to 1/3 of metasoma length in dorsal view, with dense white setae anterolaterally; all terga smooth, glabrous, without micropunctures. Hypopygium without micropunctures, prominent part of ventral spine of hypopygium 2.1× as long as broad in ventral view, with a few short setae ventrally. Body length 1.4–2.1 mm long (n = 15).

Gall. Asexual galls ( Fig. 93 View FIGURES 92–94 ) are inconspicuous stem galls comprised of individual larval cells within corky bark on 2–3 year old twigs of Q. macrocarpa . Galls are not evident as swellings on twig surfaces. Galls are not induced on twigs of the previous year’s growth, nor are they present in smooth twigs.

Biology. Asexual females of B. flavipes emerged in mid- to late April in Edmonton and oviposited into swelling buds, preferring those having the bud scales slightly open with green showing between them. Females actively palpated prospective buds, and briefly probed them by inserting their ovipositors between bud scales. Females then quickly plunged their ovipositors fully into the bud, oviposited for 10-20 seconds, retracted their ovipositors, and departed. Females mostly seemed to avoid buds into which they or other females had previously oviposited.

Sexual generation galls are multilocular, fleshy swellings along the leaf midrib or major lateral veins ( Fig. 94 View FIGURES 92–94 ) and are visible starting in mid- to late May in Edmonton. Adults emerged starting in late June or early July, and males tended to begin emerging earlier than females. Each emerging adult appeared to cut its own exit hole from the gall. Adult females of the sexual generation of B. flavipes oviposited into twig bark. We did not assess whether unmated females oviposited or produced viable eggs. Sexual generation galls have been recorded from Q. macrocarpa and Q. alba ( Burks 1979, Weld 1926), and the authors additionally observed them on Q. × bebbiana ( Q. alba x Q. macrocarpa ) and Q. × schuettei ( Q. bicolor x Q. macrocarpa ) at the Jardin Botanique de Montreal in August 2007.

Molecular taxonomy. This species was first described from adults of the sexual generation and galls on Q. macrocarpa ( Gillette 1889) ; Ives & Wong (1988) tentatively identified adults and galls of the asexual generation of B. flavipes but did not provide any confirmatory evidence. Herein, alternating generations are matched for the first time using DNA data, with four individuals (two asexual females, two sexual females) sequenced for both cytb and ITS2. Cytb sequences were on average 0.54% divergent (range 0–0.92%; GenBank accessions MN184628 View Materials – MN184631 View Materials ). Six ITS2 sequences were observed across the four individuals (two individuals being heterozygous; MN184632 View Materials – MN184637 View Materials ); those sequences were 0–0.60% divergent with three indels observed across all sequences.

The B. flavipes cytb haplotypes were on average 8.24% divergent from the only other published Bassettia cytb sequence, obtained from B. pallida (GenBank accession MG821072 View Materials ; Nicholls et al. 2018b). In addition, ITS2 sequences among the two species were about 6.64% different, with 21 indels (GenBank accession OM331820 View Materials for B. pallida ). These divergences are consistent with those expected for congeneric species, confirming our generic-level re-classification of this species.

Comments. Suspected galls of the asexual generation of B. flavipes have been identified as a source of damage on ornamental bur oaks because, at high population levels, they may attract birds which damage twigs while extracting larvae from galls ( Ives & Wong 1988; Bergdahl 2015). Photos of this damage suggest that galls containing larvae may occur on a greater variety of stem sizes and maturities than we observed, perhaps as a function of higher population densities. It is also possible that old galls bearing exit holes, which persist on larger and older stems, house other insects that are sought by birds.

Rearings of asexual galls of B. flavipes from Edmonton, Alberta produced multiple other gall occupants. The most common (88%) alternative occupant was a species of Ceroptres Hartig, 1840 ; this genus is an inquiline in cynipid galls, although it is not clear if it is lethal to the original gall inducer ( Ronquist et al. 2015). It appeared to specialize on B. flavipes in Edmonton, as it was not reared from other bur-oak-galling cynipids there (S. Digweed, unpublished data). We also reared the chalcid parasitoids Ormyrus labotus Walker, 1843 , and Sycophila marylandica ( Girault, 1916) , from asexual galls. All parasitoids emerged from mid-May to mid-June. We also reared these three species from sexual galls of B. flavipes , as well as adults of the parasitoids Baryscapus racemariae ( Ashmead, 1886) , Sycophila dubia ( Walsh, 1870) , and Eurytoma studiosa Say, 1836 . These alternative occupants of sexual B. flavipes galls emerged between early July and mid-August. Sycophila foliatae (Ashmead, 1881) , S. quercilanae ( Fitch, 1859) , and S. xanthochroa ( Ashmead, 1894) , have been reared elsewhere from sexual galls of B. flavipes ( Noyes 2016) . 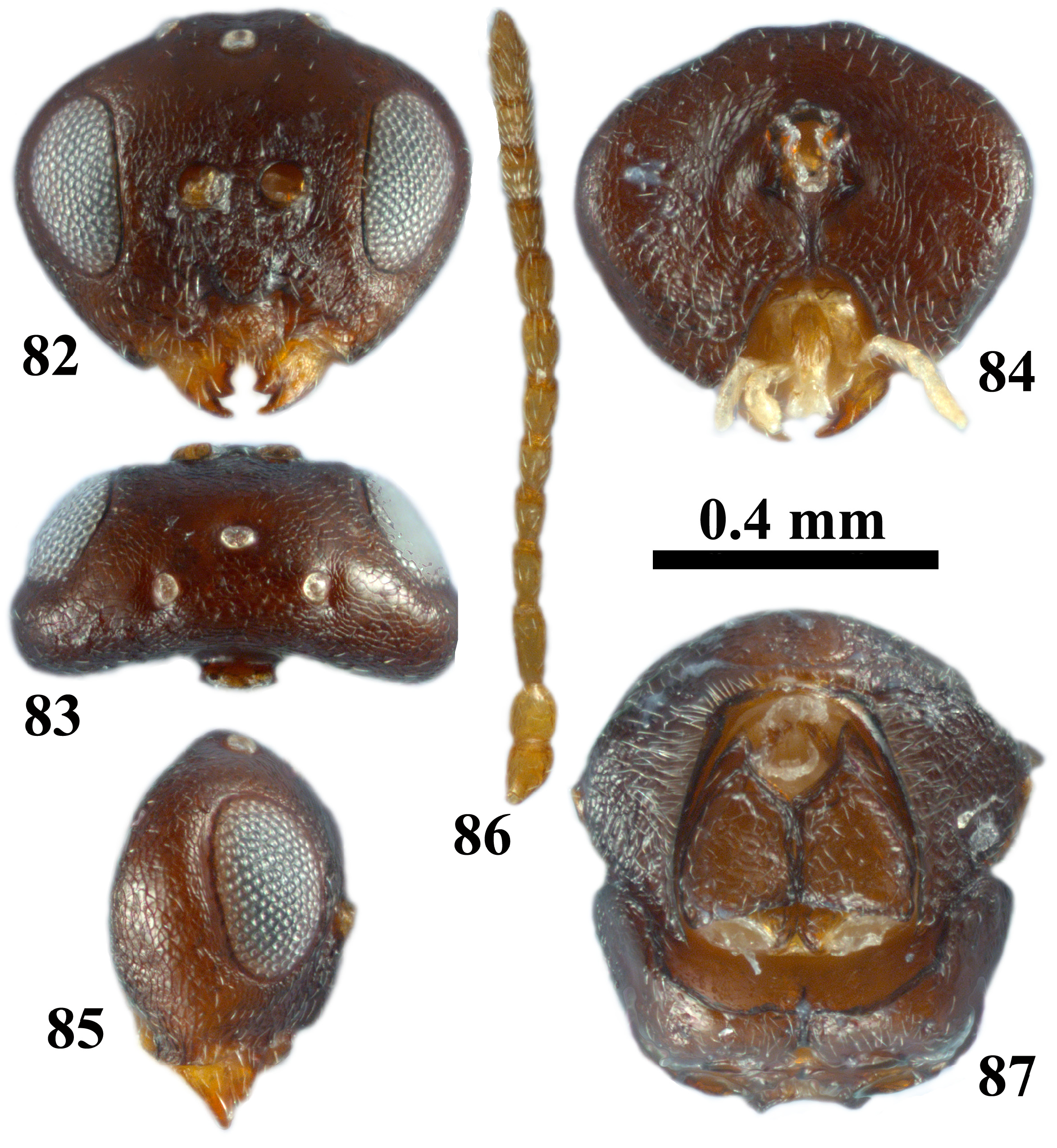 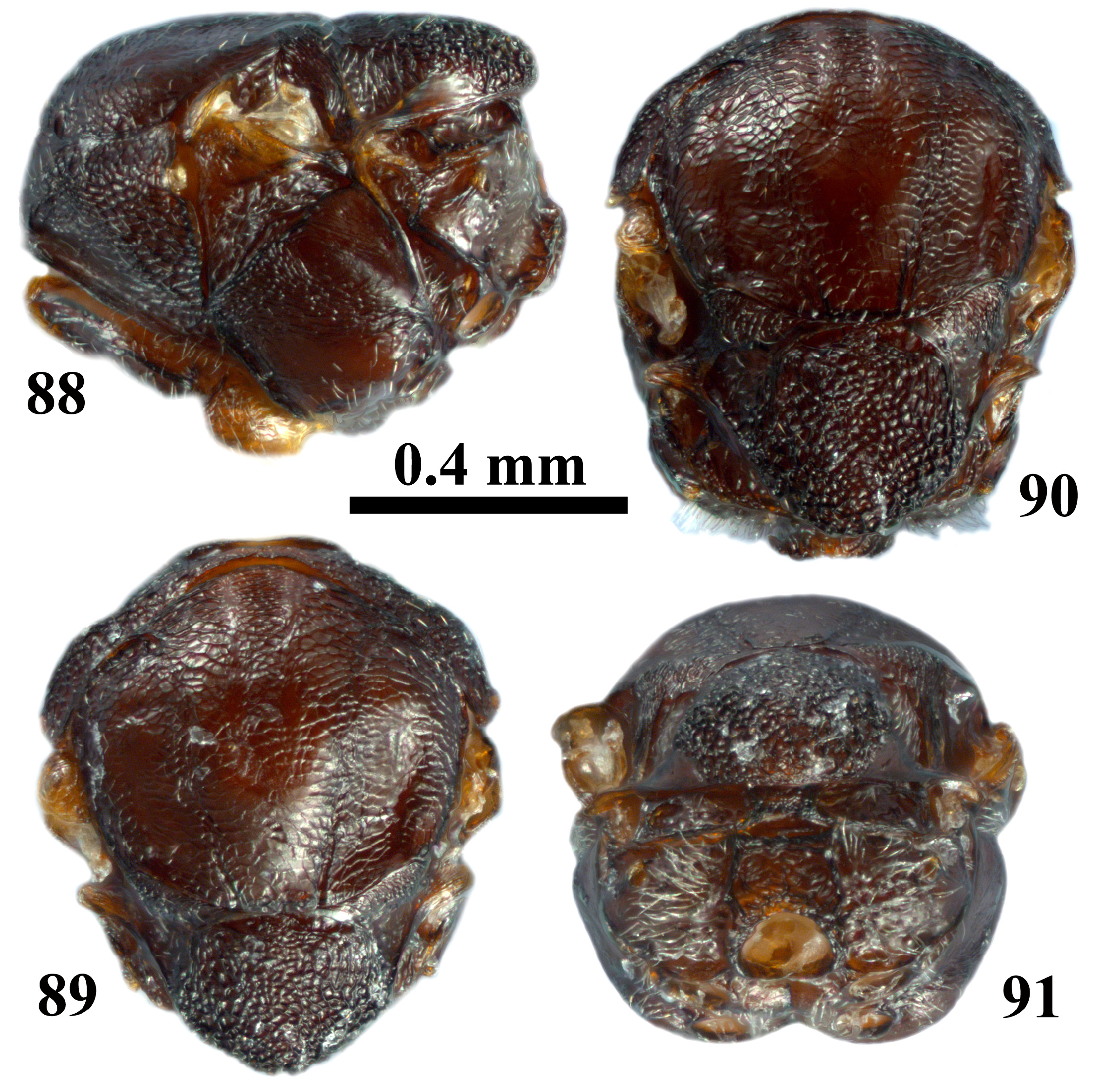 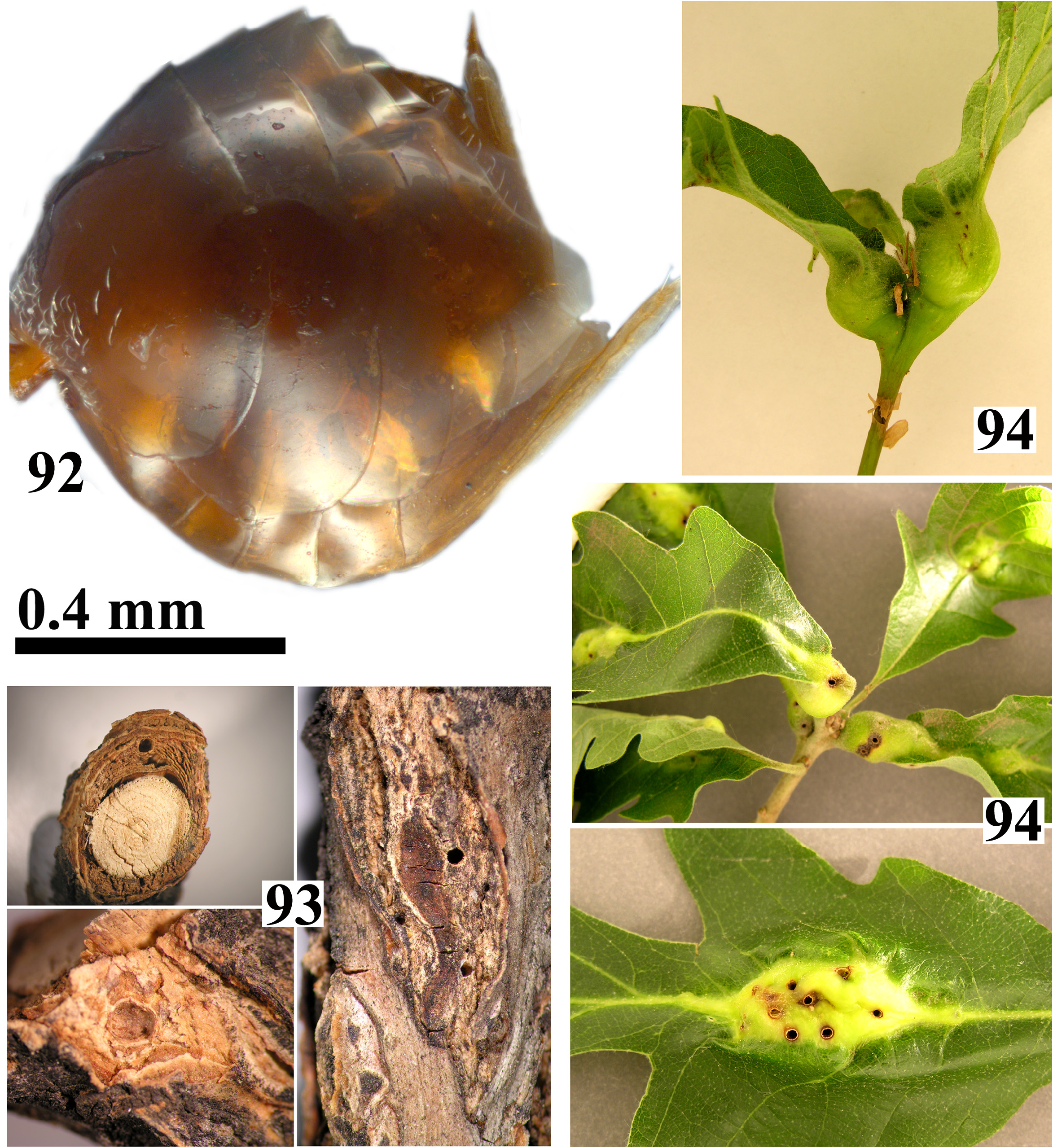