Definition. Small to large, mostly arboreal frogs lacking casque heads; many have stream-adapted tadpoles. Chromosome complement 2 n = 24, except 2 n = 22 in Hypsiboas albopunctatus  , and 18, 20, and 22 in some species of Aplastodiscus  .

Distribution. Tropical and subtropical South America northward from Bolivia, Uruguay and northern Argentina to Nicaragua, and the Islands of Tobago and Trinidad.

Remarks. Our molecular data coupled with morphological data necessitate the recognition of one new genus within Hyloscirtus  . Enlarged oral discs completely bordered by papillae and bearing large numbers of tooth rows are characteristic of four stream-breeding genera. Two of these genera ( Colomascirtus  and Hyloscirtus  ) are sister taxa in the Andes. The other two genera ( Bokermannohyla  in southeastern Brazil and Myersiohyla  in the Guiana Highlands) represent independent lineages. The largest known LTRF is 16 / 21 in Myersiohyla neblinaria Faivovich, McDiarmid, and Myers (2013)  .

Molecular data are available for only 56 of the 90 recognized species of Hypsiboas  (62 %). There are some clades that might be recognized as genera, but each is a progressive stepwise arrangement within Hypsiboas  . First and foremost among these is the Hypsiboas benitezi  Group ( Fig. 11View FIGURE 11 A), defined by Faivovich et al. (2005). Four of the species in this well-supported (98 %) clade ( Fig. 4View FIGURE 4) occur in northeastern South America, whereas two others ( H. nympha Faivovich, Moravec, Cisneros-Heredia and Köhler  and H. microderma Pyburn  exist in the upper Amazon Basin. The Hypsiboas albopunctatus  ( Fig. 11View FIGURE 11 B) and Hypsiboas pulchellus  ( Fig. 11View FIGURE 11 C) groups also are well supported (99 %). Likewise, the Hypsiboas faber  Group ( Fig. 11View FIGURE 11 D) of Faivovich et al. (2005) is well supported (100 %) in our tree, which contains, except for H. albomarginatus (Spix)  , the gladiator  frogs that construct nests, as defined by Kluge (1979), not the misuse of the term by Köhler et al. (2010). However, H. boans (Linnaeus)  , a nestbuilding gladiator  frog is related to H. semilineatus  and H. geographicus  in our tree. Such apparent discrepancies indicate that greater taxon sampling and more thorough molecular refinement is essential to construct a realistic phylogeny of this large group of Neotropical treefrogs. 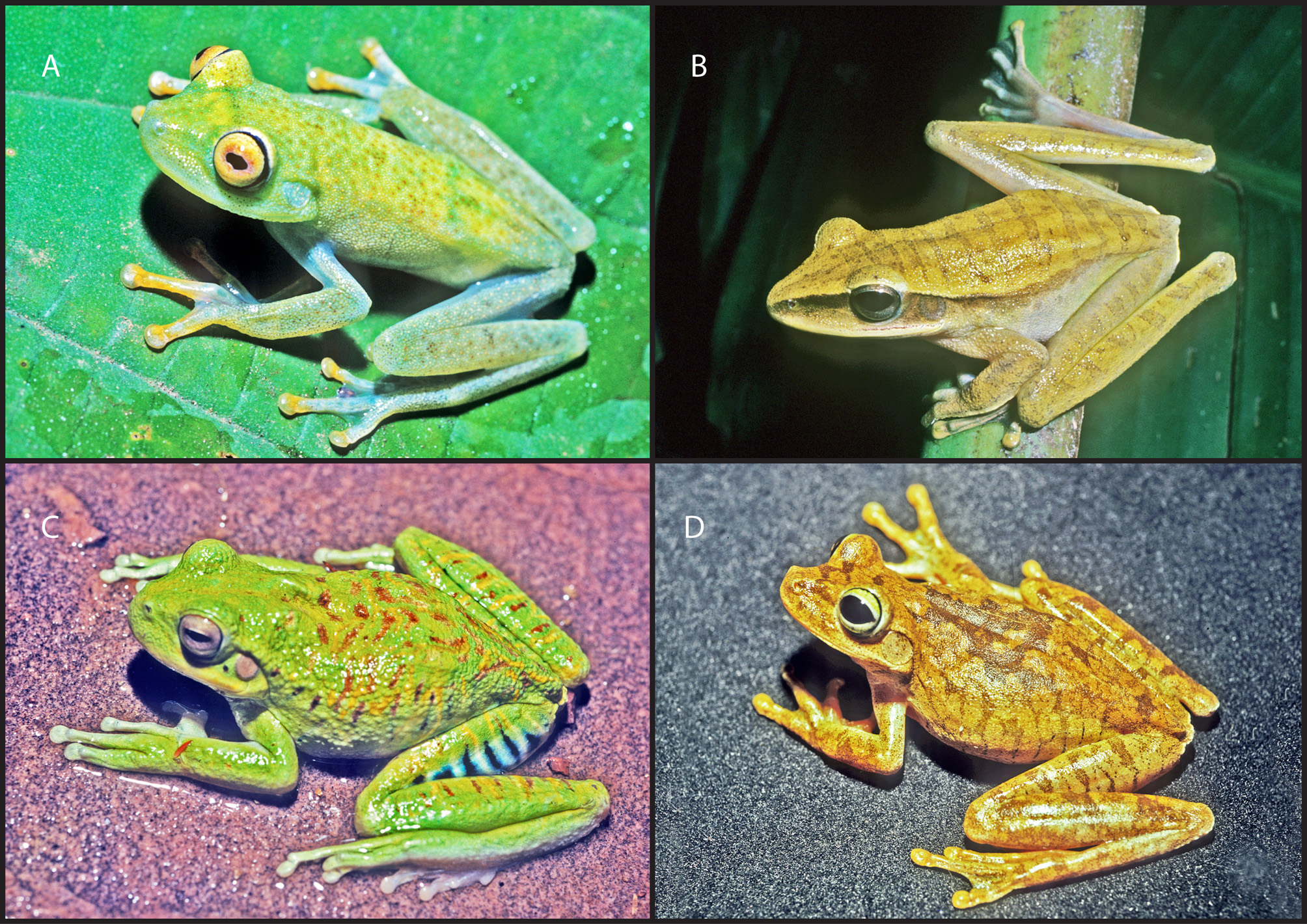