DESCRIPTION Evergreen tree up to 12 m high; youngest branchlets compressed and grooved on the 2 faces near the apex, the older terete and thickened at the nodes; internodes 1-5 cm long. Leaves coriaceous, dark green and somewhat shiny on the upper surface, yellowish and dull on the lower, granular-rugose when dry on both surfaces (especially the lower); petioles robust, 2-3 mm long; blades narrowly obovate to elliptic, 4-6 cm long, 2-3 cm wide, narrowly cuneate at base and decurrent with the petiole, the apex with a short, obtuse acumen; mid-nerve canaliculate on upper surface, somewhat prominent on the lower; transverse veins not visible on lower surface, faintly so on the upper, oblique relative to the mid-nerve, irregularly spaced; margins narrowly revolute. Cymes in fascicles of 1-3 at the terminal and subterminal nodes, 3-4.5 cm long, on

compressed peduncles (1-) 2-3.5 cm long, generally branched once or twice, the axes quadrangular, short (mostly 3-5 mm long), articulated at the base of the pedicels; bracts deciduous. Flowers not seen. Fruits globose, reddish at maturity, 7.5-9 mm in diameter, on pedicels 1-2 mm long; calycinal crown 1 mm long, the margin shallowly 4-dentate or truncate and 4-microdentate; epigynous chamber deep, the partitions forming V-shaped structures beneath the petal scars, each then joined to the central style scar by a linear structure.

The specimen SF-17940 was cited by Jacques-Félix (1985b: 36), but he chose not to describe it for lack of flowers. Now that additional collections are at hand, the species is proposed with the caveat that the description must be emended once flowering material is obtained. Ravelonarivo & Rabesonina 535 has somewhat smaller leaves but agrees in other respects with the type.

Memecylon acrogenum   is closely related to M. cotinifolioides   , and the two taxa appear to have overlapping distributions in the mountains of east-central and northeastern Madagascar. In addition to their terminal inflorescences, they share several other characteristics including branchlets and peduncles compressed, fruits globose, and leaves yellowish and conspicuously roughened on the lower surface when dry (owing to the presence of columnar sclereids in the mesophyll; cf. Jacques-Félix 1985b: 16, 36). Yet M. cotinifolioides   notably differs in having shorter leaves that are broadly obovate in outline and rounded to retuse at the apex (acumen lacking); its peduncles are also shorter (8-16 mm, rarely more than 20 mm long).

Two other Memecylon species   with terminal inflorescences, M. corymbiforme H.Perrier   and M. faucherei Danguy   , inhabit the same region as M. acrogenum   in the montane forests near Moramanga (east-central Madagascar), but both appear less closely related to M. acrogenum   when compared with M. cotinifolioides   . In M. corymbiforme   the leaves are relatively broad (obovate to oblanceolate) in outline, obtuse to rounded at the apex, and less conspicuously roughened below. In M. faucherei   the leaves are borne on relatively long petioles (6-8 mm) with blades lanceolate in outline, rounded at the base, narrowly acuminate at the apex, and obscurely roughened on the lower surface; in addition its peduncles are much shorter (c. 10 mm). 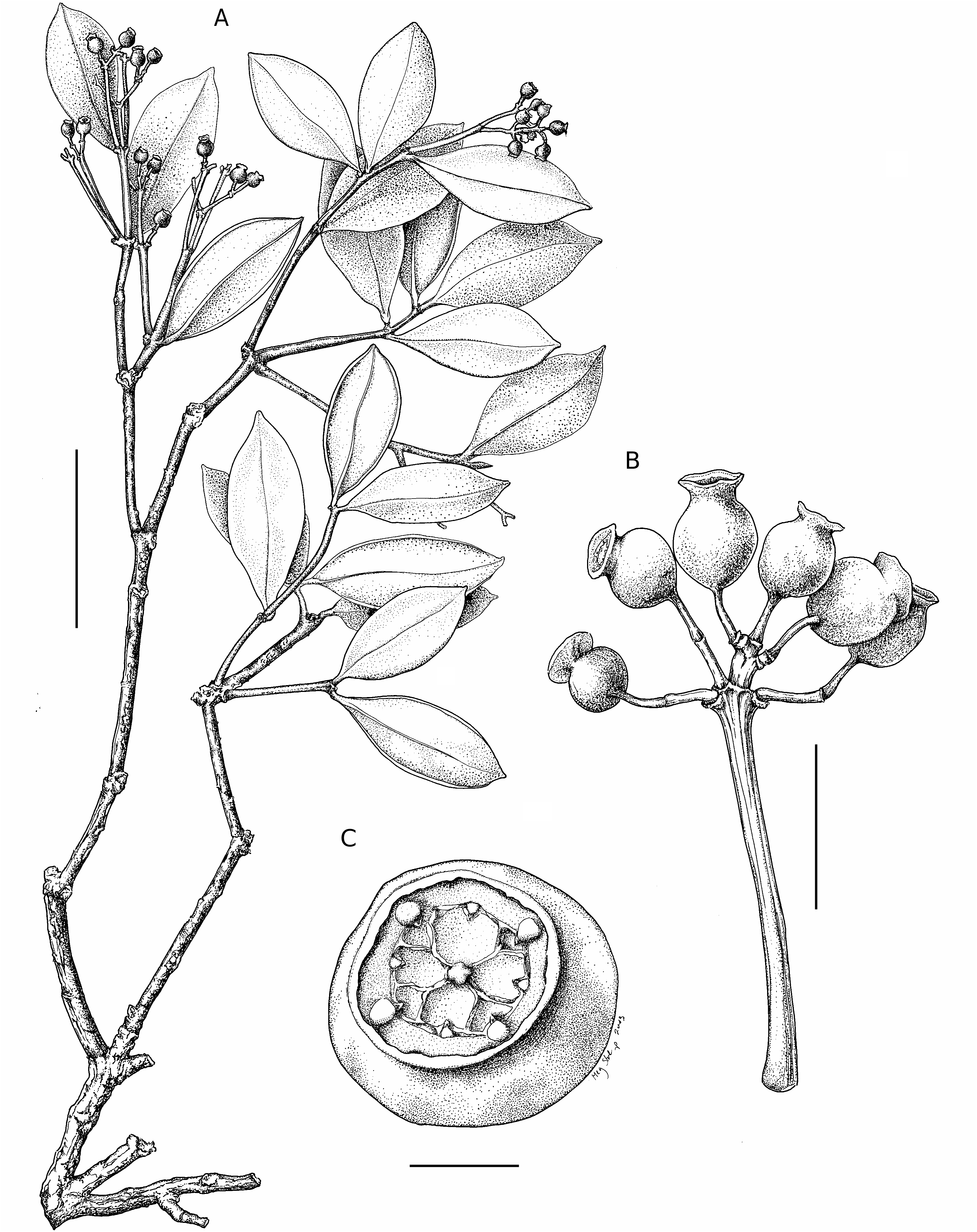