Etymology. This species is dedicated to Jean Lecomte for his welcome during the visits of GD, his contribution to the illustration of the chalcid wasps associated with asphodels, providing photographs of live adults on flowers, and for his assistance in the sampling.

Condition of holotype. Specimen complete, glued on rectangular card, with left wings removed and glued on the same card.

Head 1.83× as wide as long in dorsal view ( Fig. 21B View FIGURES 21 ). Eyes separated by 1.53× their own height; POL 2.15× as OOL and OOL 1.56× posterior ocellus diameter; temple as long as one third of eye length; anterior margin of frons somewhat convex in dorsal view; vertex laterally and mesally irregularly squamous. Head 1.34× as wide as high in frontal view, almost subcircular, with dorsal margin of vertex and lateral margin of gena evidently convex ( Fig. 21A View FIGURES 21 ). Malar space 0.61× as long as height of eye and 0.56× as long as width of oral fossa. Lower edge of antennal toruli about at mid-distance between ventral margin of clypeus and anterior ocellus, clearly above lower eye margin. Mandibles both 3-toothed with lower tooth deeply separated from median one. Labrum with 4 setae. Clypeus smooth, somewhat protruding ventrally and very faintly emarginate mesally; anterior tentorial pits visible; lower face virtually flat with radiating wrinkles originating from sides of clypeus and alternating with punctures; small area of coriaceous sculpture visible below interantennal projection; setation orientated downwards on face, outwards on the punctured frons; malar sulcus fine but complete. Surface of scrobal depression virtually smooth, with squamous sculpture quite superficial.

Fore wing ( Fig. 21G View FIGURES 21 ) 2.36× as long as wide, costal cell virtually as long as wing width; stigmal and postmarginal veins respectively 1.1× and 1.19× as long as marginal vein. Stigmal vein straight; stigma about half as wide as its distance from anterior margin of wing; parastigma with 2 sensilla placodea, uncus with 2 narrowly separated pairs of placodea. Basal cell and cubital fold sparsely setose; costal cell with 1 complete and 2–3 incomplete rows of setae and scarcely setose ventrally.

Metasoma. Petiole with small teeth, 2 laterobasal and 1 mediodorsal, bare ventrally. Gaster ovate, about as wide as and 1.22× as long as mesosoma, 1.61× as long as high. GT4 about as long as GT3 on median line. GT2–GT4 finely punctulate laterally, GT5 entirely so. GT1 with a few submedian setae anteriorly; GT2 and GT3 with few aligned setae subdorsally, GT5 with a complete line of setae. Syntergum very short and somewhat upturned.

Male identical with that of B. gijswijti   except for the setation of the fore wing which in most cases is white instead of dark.

Variation. Sometimes smaller (hardly 2 mm in length) and in such specimens the head is higher, subcircular in frontal view and more globose in dorsal view; the mesosoma is relatively longer and slender, with less sloping propodeum; the sculpture of mesonotum is more irregular with coriaceous interspaces; the setation of the fore wing is often dark beyond the venation and in one specimen examined it was entirely dark.

Diagnosis. Both sexes. Body of small size (2.2–2.5 mm). Clava effectively bisegmented. Pro- and mesonotum with superficial but regular and dense setiferous puncturation and with coriaceous interspaces between the punctures. Anterior margin of mesepisternum convex. Fore wing most often with white setation.

Female. Clava effectively bisegmented (C1, C2+3), the penultimate segment being fused with the terminal one.

Recognition. Both sexes of B. lecomtei   may be distinguished from B. abscedus   , B. ribesi   , B. insulare   and B. asphodelinae   by their small body size, superficial puncturation of mesonotum, mostly reticulate propodeum and convex anterior outline of mesepisternum. Males may be separated from the above four Bruchophagus   species by the absence of a distinct swelling on the scape and the segmentation of the flagellum which includes a 4-segmented funicle and 3-segmented clava in B. lecomtei   in contrast to the 5-segmented funicle and 2-segmented clava in the other species. Most individuals of B. lecomtei   are distinguished from those of B. gijswijti   by their white instead of dark setation on the fore wing and the more regular puncturation of the mesonotum, the punctures being well delimited, not mixed with the coriaceous interspaces. In addition, females of B. lecomtei   are separated from B. gijswijti   by their effectively bisegmented (C1, C2+3) instead of 3-segmented clava (C1, C2, C3).

Comment. The segmentation of the clava can be very difficult to establish in female B. lecomtei   , where a discontinuity mimicking a suture is present in place of the true suture between C2 and C3 found in B. gijswijti   . In doubtful cases it is necessary to make a slide mounting of the antenna. Fortunately most individuals of B. lecomtei   exhibit an entirely white setation on the fore wing, a state quite diagnostic and confirmed by a series of slide mountings of the female antenna. A problem arises when the setation of the wing is partly dark. In such cases the wing bears dark setae only beyond the venation, and setae behind the marginal vein are white. In individuals of B. gijswijti   in which the setation is only partly dark, the setae below the marginal vein are also dark.

Distribution ( Fig. 35 View FIGURE 35 ). The species is known from Morocco, Spain and France but its distribution is probably the same as that of its host plant which occurs widely in the Mediterranean Basin. 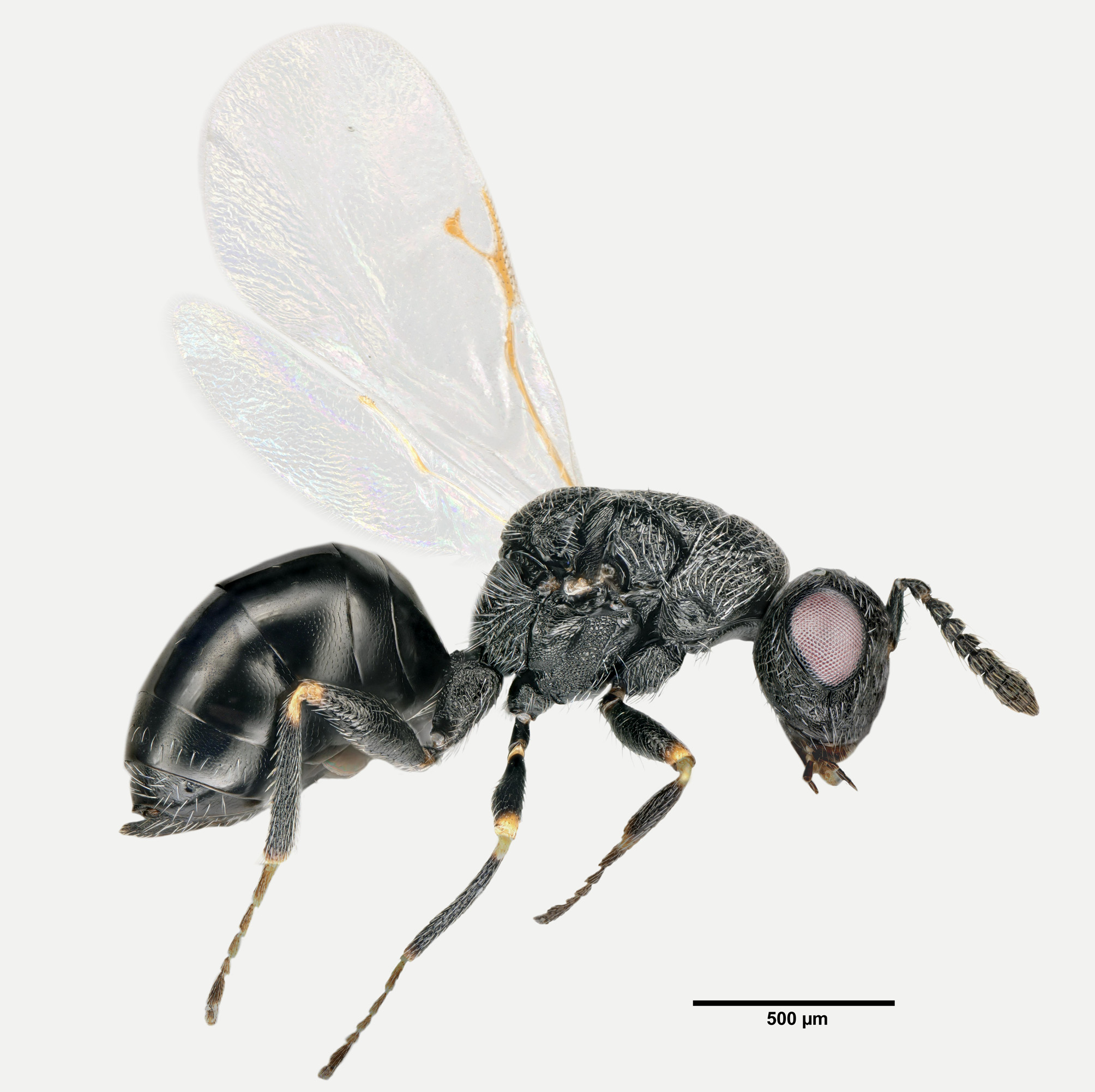 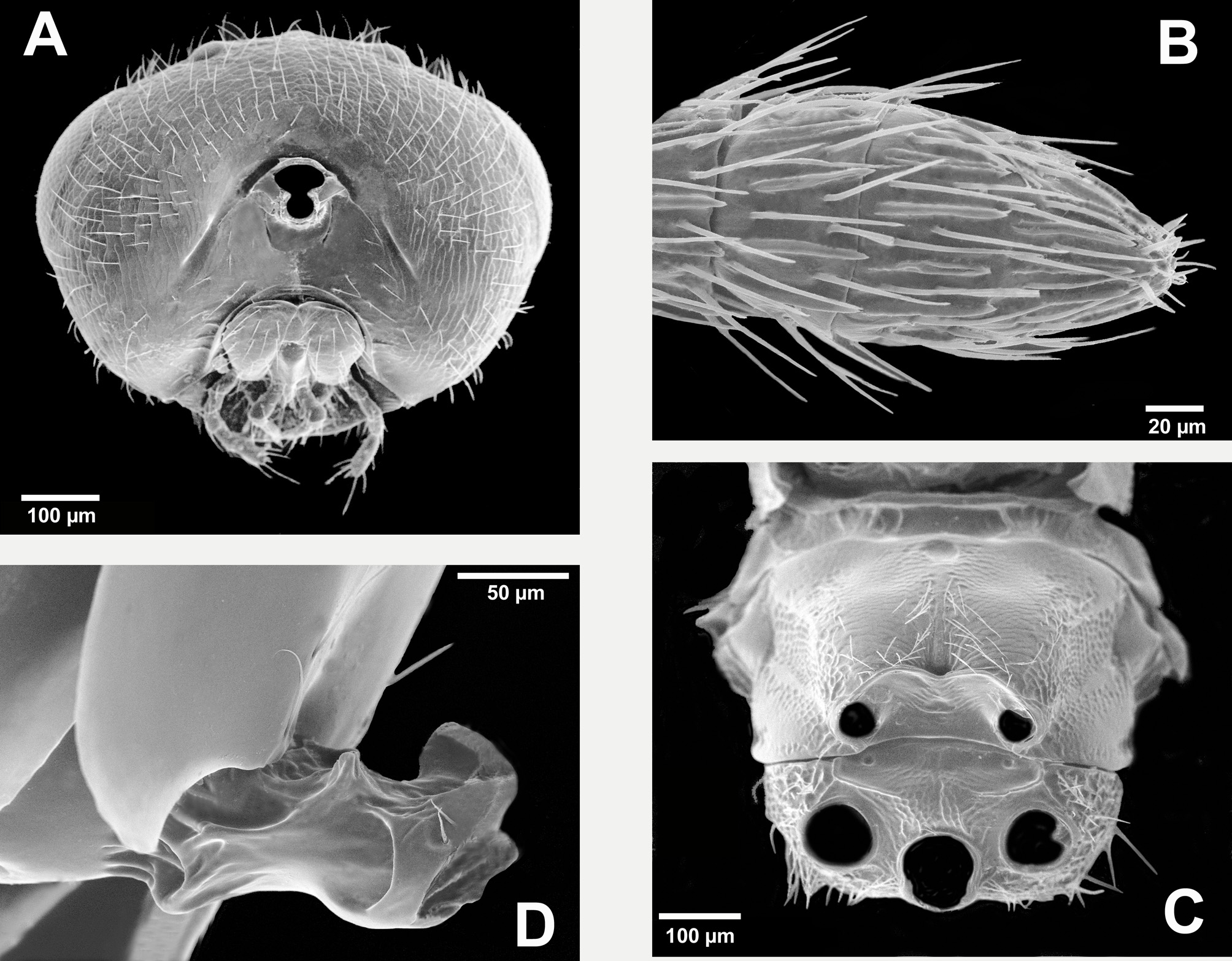 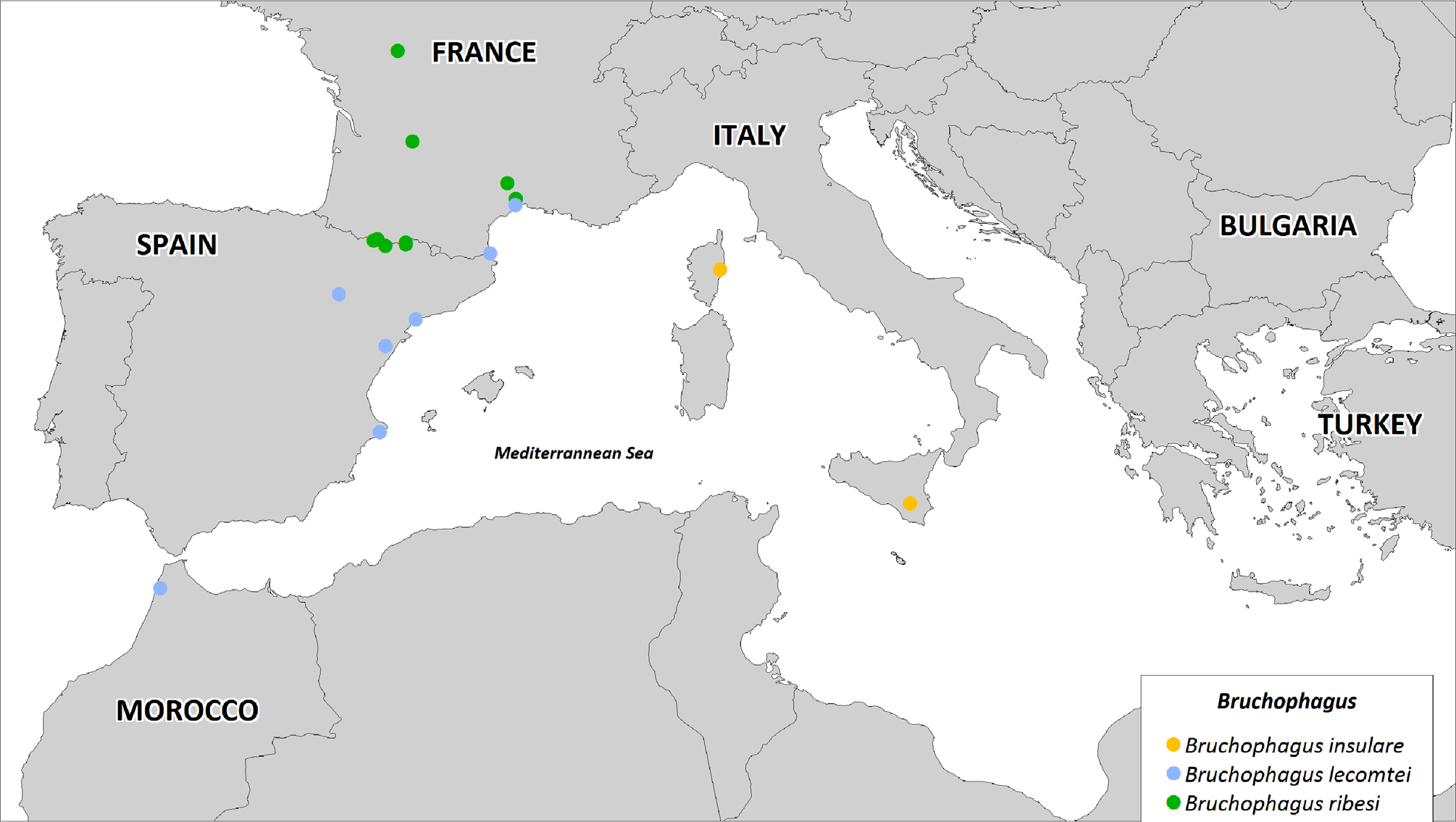 FIGURE 43. Trophic web of A. fistulosus. Horizontal scale bars proportional to the numbers of reared specimens examined that are indicated in the bars. Arrows pointing out the direction of the trophic relationships: from phytophagous Bruchophagus spp. to the asphodel and from parasitoids to chalcid hosts.

TABLE 4. Some measurements (in µm) on females of the newly described eurytomid species.

TABLE 5. Some ratios calculated from the measurements figured in Table 4.