Etymology. This species is named for Antoni Ribes who made a very substantial contribution to this study before his death in December 2014.

Condition of female holotype. Specimen complete, glued by right side to rectangular card.

Head in dorsal view rather more than 2× as broad as long, eyes separated by 1.8× their own height; POL 1.8× OOL and OOL 2.2× long diameter of posterior ocellus; temples about 0.4× eye length ( Fig. 12B View FIGURES 12 ); head in front view ( Fig. 12A View FIGURES 12 ) almost 1.4× as wide as high; gena weakly curved malar space 0.7× as long as height of eye and 0.6× as long as width of oral fossa. Toruli about equidistant from anterior margin of clypeus and anterior ocellus. Clypeus almost smooth and weakly protuberant, anterior tentorial pits visible; lower face with a median ridge from clypeus to between toruli and with rather weak radiating striae from sides of clypeus to about two-thirds distance to eye, but mostly with reticulate microsculpture in large areoles with poorly-defined margins and central setae; setation of lower face oriented downwards and mesally. Frons with large punctures, bottoms shining but with reticulate microsculpture and central setae directed laterally; malar sulcus traceable for only a short distance below the small suborbital fovea. Genal carina weak, visible for only a short distance above oral fossa. Antennal scrobe with outer margin slightly raised.

Antenna ( Figs 12C, D View FIGURES 12 ) with scape slightly stouter in proximal two-thirds, about 3.7× as long as broad. Pedicel plus flagellum as long as width of head. Pedicel 1.4× as long as wide. Flagellum less stout than in B. abscedus   with F1 hardly broader than pedicel, about 1.6× as long as broad; F2 as long as broad; F3 to F5 increasingly transverse; seventh flagellar segment (C1) separated from the eighth (C2) by a deep constriction (in some prepared specimens, as in the holotype, a dried white exudate has erupted from this suture), but C2 and C3 are fused so that the funicle is considered here to be 5-segmented and the clava effectively 2-segmented (composed of C1 + C2+3) ( Fig. 12E View FIGURES 12 ), C1 about 2× as broad as long, C2+3 about 1.6× as long as broad, not quite as long as F5 plus C1.

Mesosoma ( Fig. 12F View FIGURES 12 ) 1.54× as long as wide, 1.4× as long as high. Pronotum 3.35× and mesoscutum 1.65× as wide as long; mesoscutellum 1.1× as long as wide. Dorsal surface of mesosoma in profile with pronotum and mesoscutum evenly arched, mesoscutellum more strongly arched, propodeum declived at an angle of about 85° to plane of mesoscutellum and mesoscutum. Pro- and mesonotum with closely-packed umbilicate punctures, the areolar walls contiguous and at most with only an extremely few very small, microreticulate interspaces, mesonotum anteriorly with a few transverse wrinkles between rows of punctures. Notauli impressed except for extreme posterior part and with inner and outer margins step-like. Scutello-axillar grooves deep, terminating anteriorly just mesad of posterior ends of notauli. Mesoscutellum with umbilicate punctures larger than on mesoscutum and interspersed by larger patches of microsculpture; axilla dorsally with rather few and small umbilicate punctures, these separated by microreticulation which becomes finely striate ventrally. Mesosoma viewed laterally with prepectus about as long as tegula, delimited dorsally by a broad, smooth ridge and ventrally by a finer ridge, its disc dull with irregular sculpturation. Lateral panel of pronotum squamous reticulate. Mesepisternum with anterior margin of epicnemium almost straight, some convexity only in front of mesocoxae, epicnemium finely reticulate, epicnemial carina complete and fronted by a row of large punctures, distance between pro- and mesocoxae relatively short. Lower mesepimeron with reticulate sculpture coarser than on epicnemium, upper mesepimeron with reticulation irregular and strigose on lower part but finer and more even dorsally. Metapleuron with moderately coarse punctures but appearing longitudinally striate when viewed from certain angles. Propodeum ( Fig. 12G View FIGURES 12 ) rather less than 2× as broad as long, its dorsal surface relatively flat with large punctures except on poorly defined median groove which is finely reticulate. Procoxa without depression on frontal surface. Metacoxa with dorsal surface finely reticulate and bare.

Fore wing ( Fig. 12J View FIGURES 12 ) 2.1× as long as wide; lengths of costal cell: marginal vein: stigmal vein: postmarginal vein as 60:13:14.5:17. Stigmal vein straight, stigma not quite half as wide as its distance from anterior margin of wing, uncus with 2 pairs of placodea. Basal cell with about 12 upper surface setae; costal cell on upper surface with a complete anterior row of setae plus some additional setae at apex, anterior one-third of lower surface setose; speculum small, reaching only base of parastigma and partially closed below.

Metasoma ( Fig. 12K View FIGURES 12 ). Petiole about 0.7× as long as broad, dorsally with strong reticulate sculpture. Gaster about as long as head plus mesosoma, in lateral view 1.5× as long (excluding ovipositor) as deep; GT4 dorsally 1.3× as long as GT3 with a band of sparse setae dorsolaterally; syntergum in dorsal view about 1.6× as broad as long; exposed part of ovipositor sheath about 0.7× length of syntergum.

Male. Length 2.4–3.2 mm. Wing pilosity darker than in female but colouration otherwise similar. Antenna ( Fig. 12L View FIGURES 12 ) with pedicel plus flagellum about 1.3× as long as head breadth; funicle of 5 segments and clava 2- segmented although a deep constriction may separate flagellar segments 7 and 8; F 1 in profile not quite 2× as deep as pedicel, its body 1.5× as long as broad; F6 rather less than 2× as long as broad; setae on funicle segments longer and finer than in B. abscedus   , those on F1–F5 longer than their segments, arranged in 3 irregular whorls on F1 and in 2 whorls on the other funicle segments; claval segment slightly shorter than F6, about 2× as long as broad.

Variation. The size varies according to the associated asphodel. There is a strong contrast between females reared respectively from A. albus   and A. ramosus   on the one hand and A. cerasiferus   on the other. In the former phenotype the gaster is relatively shorter, about as long as head plus mesosoma ( Fig. 12F View FIGURES 12 ), but in the latter it is distinctly longer and the ovipositor sheaths are strongly upturned ( Fig. 11 View FIGURE 11 ). For some time it was hypothesized that the two phenotypes may belong to separate species but the molecular data clearly indicate that only one species is involved ( Figs 8–9 View FIGURE 8 View FIGURE 9 ). Another variation, this apparently independent of the associated asphodel and appearing within populations at the same site, concerns the segmentation of the flagellum. In some females a strong constriction, in addition to a suture, may be present between the 7 th and 8 th flagellomeres ( Fig. 12D View FIGURES 12 ); the funicle hence appearing 6-segmented whereas it is more distinctly 5-segmented in most females ( Fig. 12C View FIGURES 12 ).

Female. OOL 1.7× as long as posterior ocellus diameter; POL 1.9× as long as OOL; clava bisegmented (the penultimate segment being fused with the terminal one), occasionally with a constriction between the 7 th and 8 th flagellomeres, hence the funicle, although usually 5-segmented, sometimes appears 6-segmented; setation of fore wing entirely white; stigmal and postmarginal veins respectively 1.25× and 1.55× as long as marginal vein.

Male. Scape with moderately protruding apicoventral swelling; flagellum 5-segmented and clava 2-segmented, C1 and C2 separated only by a suture.

Recognition. Both sexes of B. ribesi   may be distinguished from B. gijswijti   and B. lecomtei   by their larger size and the straight anterior outline of the mesepisternum ( Fig. 11 View FIGURE 11 ). The species may be separated from B. abscedus   by the very dense punctuate sculpture of the mesoscutellum without coriaceous interspaces ( Fig. 12F View FIGURES 12 ). The white setation of the fore wing in the female separates B. ribesi   from both B. insulare   , to which it is extremely close but which has bicoloured setation, and from B. abscedus   in which the setation is entirely dark. The female of B. ribesi   may also be separated from that of B. abscedus   by having a 5-segmented funicle and 2-segmented clava, although in some specimens of B. ribesi   a deeper constriction may separate the 6 th from the 7 th flagellomere, giving the funicle a 6-segmented appearance. The two terminal flagellomeres are fused in B. ribesi   but separated in B. abscedus   . Bruchophagus ribesi   is distinguished from B. asphodelinae   by the relative proportions of OOL and POL and by the venation of the fore wing. The form of the gaster is also useful in distinguishing B. ribesi   , although it varies somewhat according to the associated asphodel. In specimens emerging from A. albus   the gaster is short with the ovipositor sheaths hardly upturned ( Fig. 12K View FIGURES 12 ), but in those associated with A. cerasiferus   the gaster is longer with the sheaths clearly upturned ( Fig. 11 View FIGURE 11 ). The gaster of female B. asphodelinae   is also relatively long but the ovipositor sheaths are only slightly upturned ( Fig. 15 View FIGURE 15 ).

Biology. Host plants. Bruchophagus ribesi   is most usually associated with A. albus delphinensis   ( Fig. 40 View FIGURE 40 ) and it is the only Bruchophagus   species reared from seeds of this plant. It was observed in large numbers on flowering spikes with green fruits in both the French and Spanish Pyrénées. In the Val de Pineta near Bielsa (Huesca), Spanish Pyrénées, a sample (7 ♀ 4 ♂) was collected in the field on 6.vii 2007 from flowering stems of A. albus delphinensis   (together with larger numbers of Eurytoma asphodeli   ), and 6 ♀ were found drilling fully formed green fruits of the same asphodel on 9.vii. 2009 in Val d’Ossoue, French Pyrénées. Bruchophagus ribesi   , however, is not confined to high altitude and apparently also occurs in A. a. albus   seeds, together with B. abscedus   , in more northerly parts of this plant’s range, being identified in rearings from seed capsules of A. albus albus   collected in lowland localities in France (Vienne, Dordogne). On the Causse du Larzac, in southern France, at an elevation around 800 m, it was the single Bruchophagus   species associated with A. cerasiferus   ( Fig. 41 View FIGURE 41 ) and a single female was reared from A. ramosus   at Banyuls-sur-Mer near the coast ( Fig. 42 View FIGURE 42 ). Another female was collected by sweeping near Montpellier by Hubert Tussac before its association with asphodels was known. Thus B. ribesi   is primarily a montane species but it may also, on occasion, be found on mediterranean or submediterranean asphodels. Its larval life is passed within a single seed in which it is believed to be phytophagous. 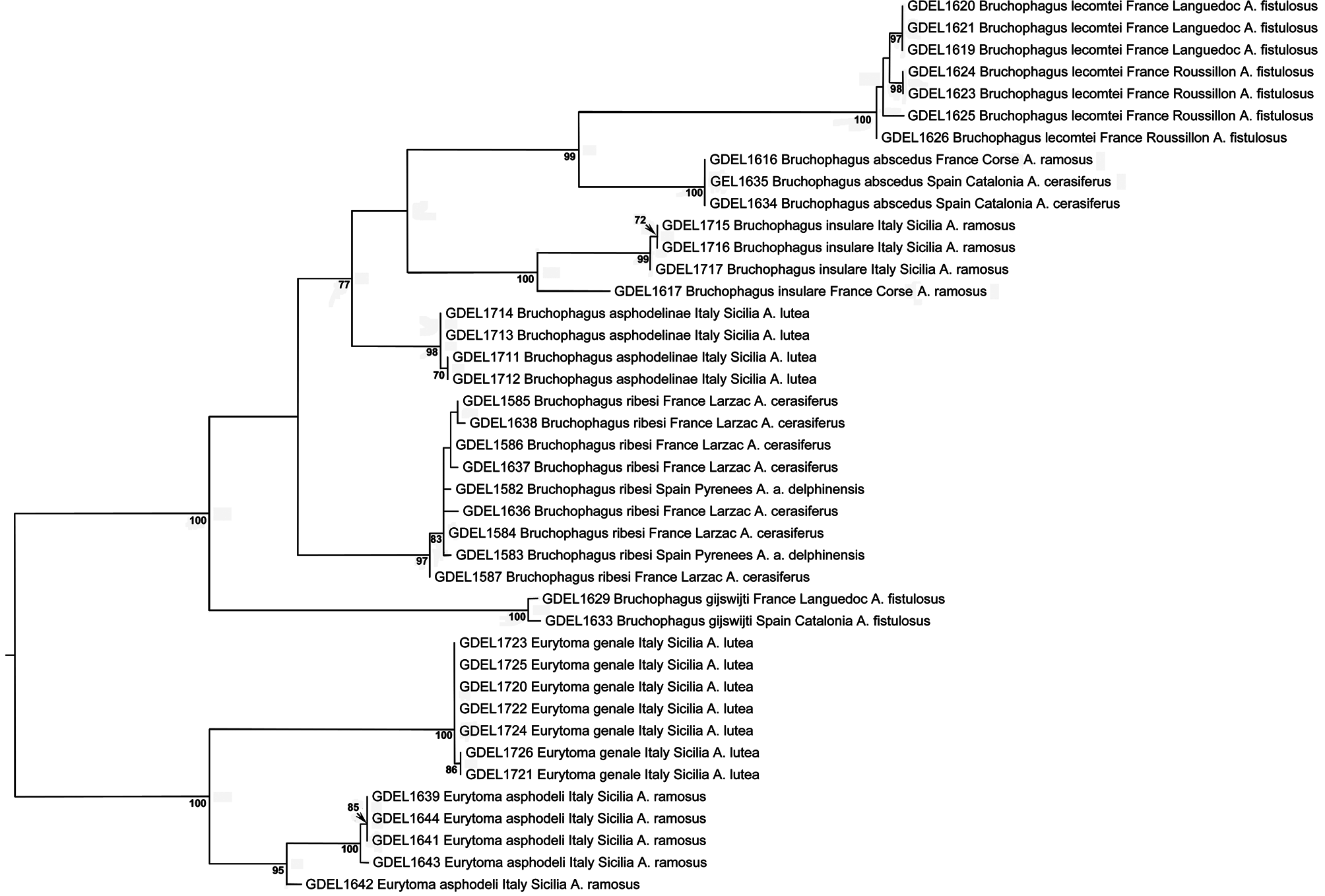 FIGURE 8. ML tree figuring the relationships of the Eurytomidae based on the barcoding fragment of the mitochondrial gene CytB. Annotations identical to those of the Fig. 7. FIGURE 9. ML tree figuring the relationships of the Eurytomidae based on the barcoding fragment of the nuclear gene EF1-α. Annotations identical to those of the Fig. 7. 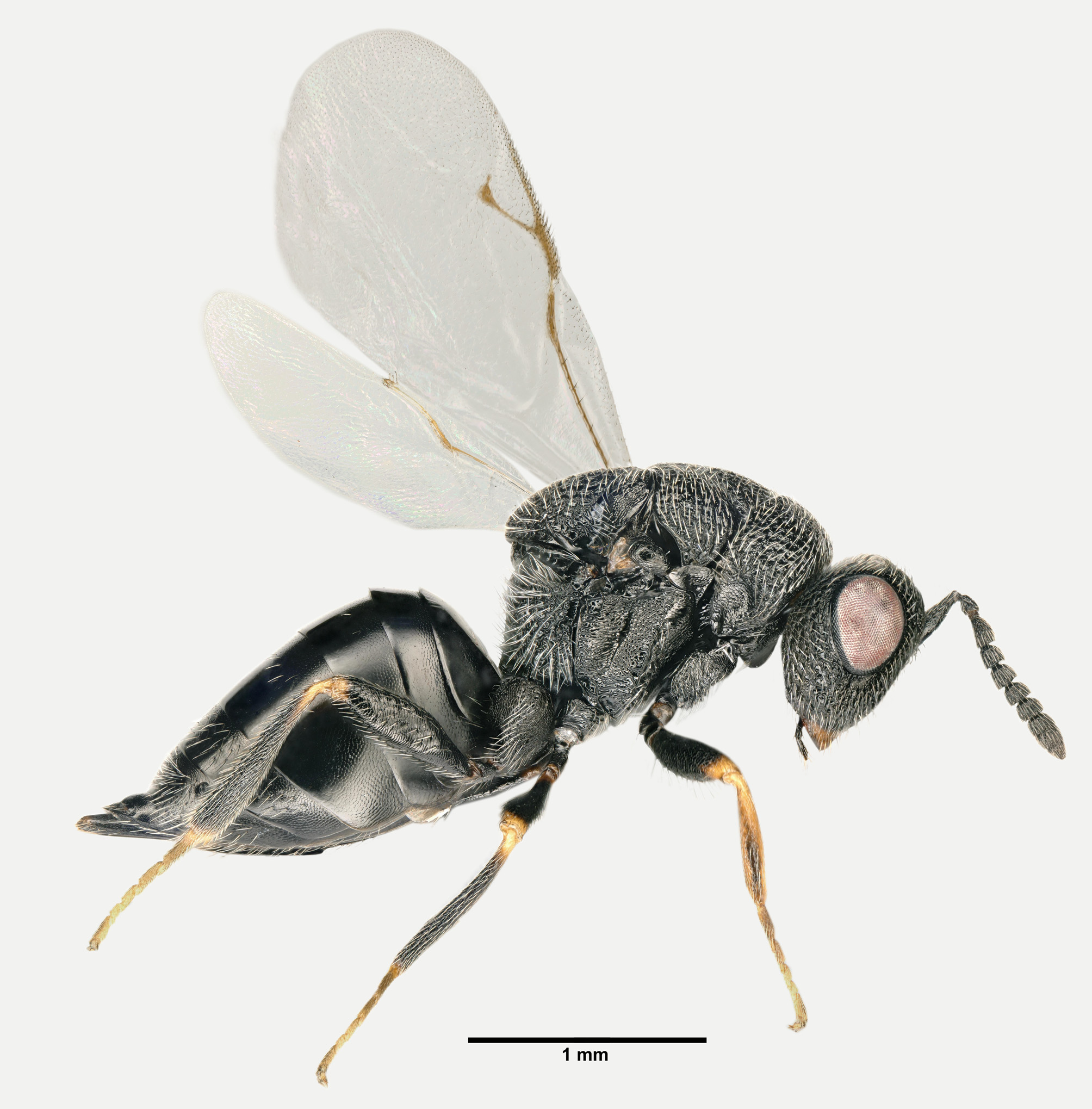 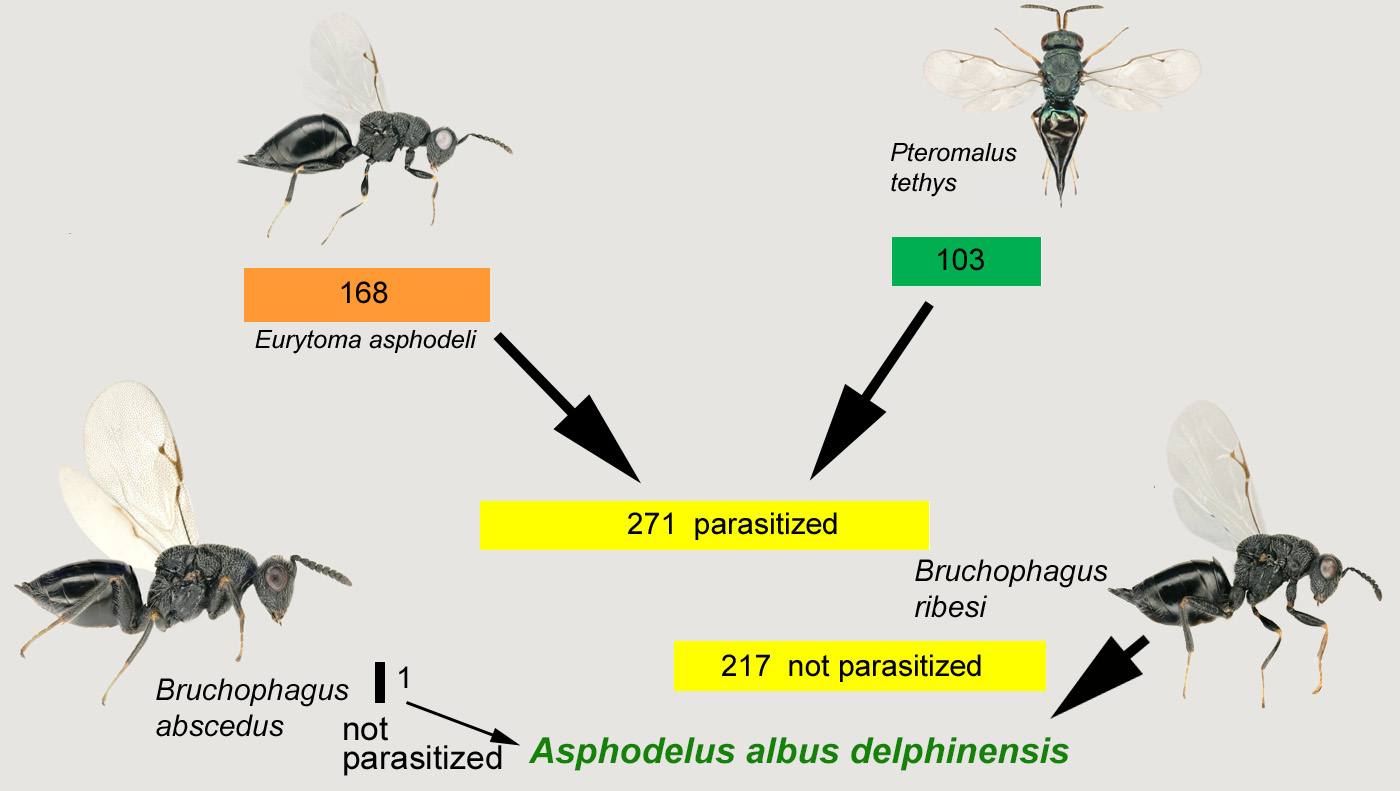 FIGURE 40. Trophic web of A. albus delphinensis. Horizontal scale bars proportional to the numbers of reared specimens examined that are indicated in the bars. Arrows pointing out the direction of the trophic relationships: from phytophagous Bruchophagus spp. to the asphodel and from parasitoids to chalcid hosts.

FIGURE 41. Trophic web of A. cerasiferus. Horizontal scale bars proportional to the numbers of reared specimens examined that are indicated in the bars. Arrows pointing out the direction of the trophic relationships: from phytophagous Bruchophagus spp. to the asphodel and from parasitoids to chalcid hosts.The estimated number of Bruchophagus abscedus parasitized by P. depilata was estimated considering that a mean of 10 Puklina emerge from a larva of Bruchophagus. FIGURE 42. Trophic web of A. ramosus. Horizontal scale bars proportional to the numbers of reared specimens examined that are indicated in the bars. Arrows pointing out the direction of the trophic relationships: from phytophagous Bruchophagus spp. to the asphodel and from parasitoids to chalcid hosts. The estimated number of Bruchophagus abscedus parasitized by P. depilata was estimated considering that a mean of 10 Puklina emerge from a larva of Bruchophagus. FIGURE 46. Phenology of the two sexes of Bruchophagus ribesi according to the asphodel.