Diagnosis. Glaphyrosoma stephanosoltis  sp. nov. is dorsally colored in solid dark brown ( Figs. 1View FIGURE 1, 3View FIGURE 3, 10View FIGURE 10), and is similar in overall coloration to G. gracile  , G. anderi  , G. beretka  , G. bulbosum  , G. pushenkovi  , G. franciscoasturiasi  , G. hectorcentenoi  , and G. magnaproctalis  . However, it can be separated from all other members of the genus by having quadrangular male paraproctal process with a spine protruding medially facing upwards ( Figs. 7B, 7CView FIGURE 7, 9A, 9DView FIGURE 9). This species is morphologically most similar to G. magnaproctalis  according to the key presented by Cadena- Castañeda & Monzón-Sierra (2017), but differs in the position of the spine on male paraproctal process and the appearance of the male subgenital plate as well as the length of styli. The spine arises medially in G. stephanosoltis  sp. nov. instead of being located at the top of the paraproctal process. The subgenital plate also shows more curvature between the styli forming a deep “V” shaped notch half the length of the subgenital plate ( Fig. 7DView FIGURE 7, 9BView FIGURE 9) and differs from the subgenital plate of G. magnaproctalis  in which there is almost no notch in between the styli.

DNA Barcode. We have generated a DNA barcode for G. stephanosoltis  sp. nov., which has been deposited to GenBank with accession number MN 128722View Materials, and the DNA tissue voucher specimen was deposited to TAMUIC Insect Genomic Collection with voucher number TAMUIC-IGC-002678. Although Vandergast et al. (2017) generated COI genes for many Anostostomatidae  , including several unidentified specimens of Glaphyrosoma  from Mexico, the primers that they used (C1-J-2183 and C1-N-2872) amplified the back half of the COI gene and did not overlap with the DNA barcode region, which is located in the front half of the COI gene. Therefore, our DNA barcode represents the first for the genus.

Biological Information. Glaphyrosoma stephanosoltis  sp. nov. was hand collected along the trails adjacent to secondary rainforest in the vicinity of the Soltis Center for Research and Education. The Soltis Center’s forests are adjacent to the Children’s Eternal Rainforest (Bosque Eterno de los Niños) and located about 450 m above sea level. The insects were only found after sunset when it was sprinkling or after it had just rained, and were more abundant when temperature was above 21 oC. The species was never observed during the day, and when kept in a screen cage with foliage comprised of torn leaves and branches, it was observed that the insects still hid under foliage, even in a dark environment. Those that were unable to hide under the foliage started to appear dull in their cuticles, which suggested that they desiccate easily even on the rainforest floor. The species most likely lives underground in order to avoid desiccation and remain in a higher level of humidity beneath the rainforest floor and only comes out when humidity levels are higher to search for food or mates. When collecting specimens along trails, it was found they tended to hide on the overhanging dirt underside along trails and sometimes in tunnels most likely made by other burrowing animals. When baited with oatmeal, the insects were attracted within an hour of placing the bait, which suggested that these insects might be targeting a good source of carbohydrate and protein, which are rich in the oatmeal used for the trail. When presented with a choice between a plant mixture ( Passiflora  sp., Cecropia obtusifolia  , Neurolaena lobata  , and unidentified Piperaceae  ) and a protein mixture (land crab and katydids), all of which were commonly found in the forest, G. stephanosoltis  sp. nov. showed overwhelming preference for the plants. However, when kept in a cage with other insects, they fed on dead crickets and katydids, suggesting a necrophagous behavior. Collectively, these observations suggest that G. stephanosoltis  sp. nov. is an omnivorous insect, which is a common dietary pattern in many ensiferans. 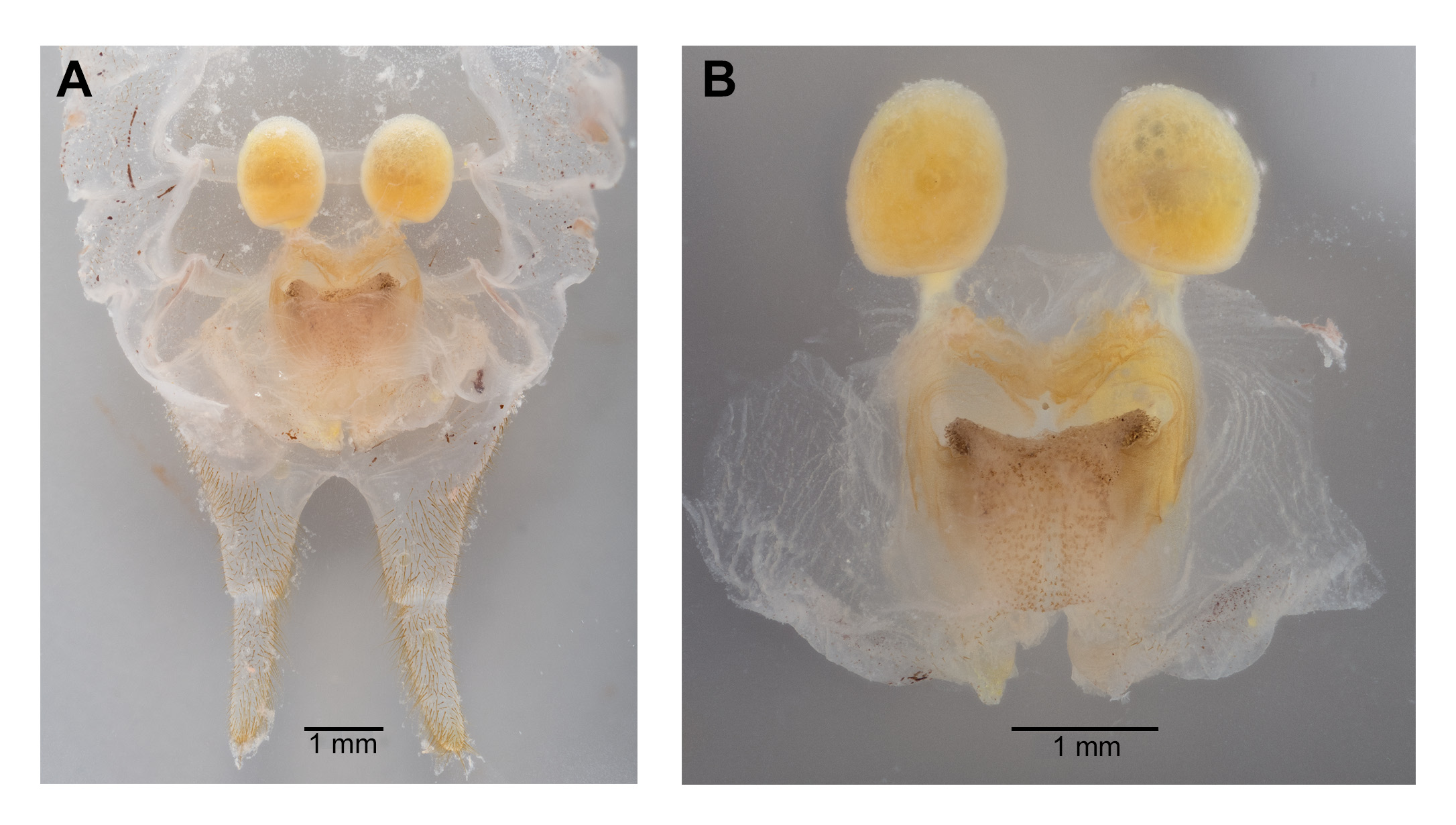