Color in alcohol. Preserved specimens with overall ground color yellowish. Guanine pigmentation present on opercular and infraorbital series, and over most of flank scales from midlateral dark stripe to below. Body covered by scattered dark chromatophores, more concentrated on distal margin of scales forming a reticulated pattern. Dorsal and dorsolateral portions of head and body dark brown. Lateral region of the head densely covered by dark chromatophores, less concentrated on third infraorbital and below it, and over laminar portion of opercle and subopercle. Lower lip dark brown. Ventral regions of head and abdomen light. Black humeral spot conspicuous, narrow and vertically elongated; two or two and a half scales wide and about six scales high. Midlateral dark stripe extending from humeral region to median caudal-fin rays, about two to four (usually three) scales far from humeral spot. Anterior portion of midlateral stripe vertically expanded, about three scales high, gradually decreasing to one scale high in caudal peduncle at vertical through insertion of base of last anal-fin ray. Its anterior region a bit darker than remaining, insinuating a faint second humeral spot in few specimens. Terminal portion of midlateral stripe at caudal peduncle irregularly expanded forming an inconspicuous caudal spot extending over caudalfin base. Midlateral stripe faint over medial caudal-fin rays in larger specimens, more visible at small fish. All fins, except adipose fin, reddish to orange with distal margin hyaline and scattered dark chromotophores, more concentrated on its distal margins. Adipose fin yellowish as background color of body with dark chromatophores mainly on its base.

Color in life. Color in life is similar to that in preserved specimens but more silvery, stronger red pigmentation, and lateral spots and midlateral stripe less evident.

Sexual dimorphism. Secondary sexual characters were not found on examined specimens. Occasional nuptial tubercles were not associated to sex herein.

Habitat and ecological notes. Astyanax eremus   inhabits the rio Canivete, a small, short and isolated tributary to the main channel of the upper rio Iguaçu, at Balsa Nova county. Rio Canivete runs through a grove of about 1,000 m long and 150 m wide, where the sampling point is located. This woodland, which is more or less well preserved with native and introduced marginal vegetation, mainly formed by trees (including Brazilian pine Araucaria angustifolia (Bertol.))   and bushes, is somewhat an island inside a wheat plantation. It is bounded upstream by a fall of about 10 m, and downstream by a series of rapids for about 1,000 m which form a gap of more than 35 m from the sampling area up to the rio Iguaçu ledge. The sample site was inside the grove and had about 0.5-1.0 m depth and about 5 m width, with lentic transparent water and sandy and clay bottom variably covered by fallen trees, branches and leaves ( Fig. 4 View Fig ). No other fish species was collected at the sample area of A. eremus   .

Macroscopical observation of gonads extracted from the four c&s specimens indicates that A. eremus   was at reproductive season during the collect period (October). Two of the specimens where mature females, with ovaries full of ovocytes (71.9 and 76.9 mm SL). One of the specimens was a mature male with large testicles (61.8 mm SL). The smaller specimen (44.6 mm SL) was immature and its sex could not be identified. It was not possible to associate the scarse and underdeveloped observed tubercles to sexual dimorphism.

Distribution. Astyanax eremus   is known from its type locality ( Fig. 5 View Fig ) in the rio Canivete, a small and short isolated affluent of the upper rio Iguaçu, a tributary to the rio Paraná drainage.

Etymology. From the Latin eremus   , that means “alone” or “uninhabited”, in allusion to the absence of other fish species in the type locality. An adjective. 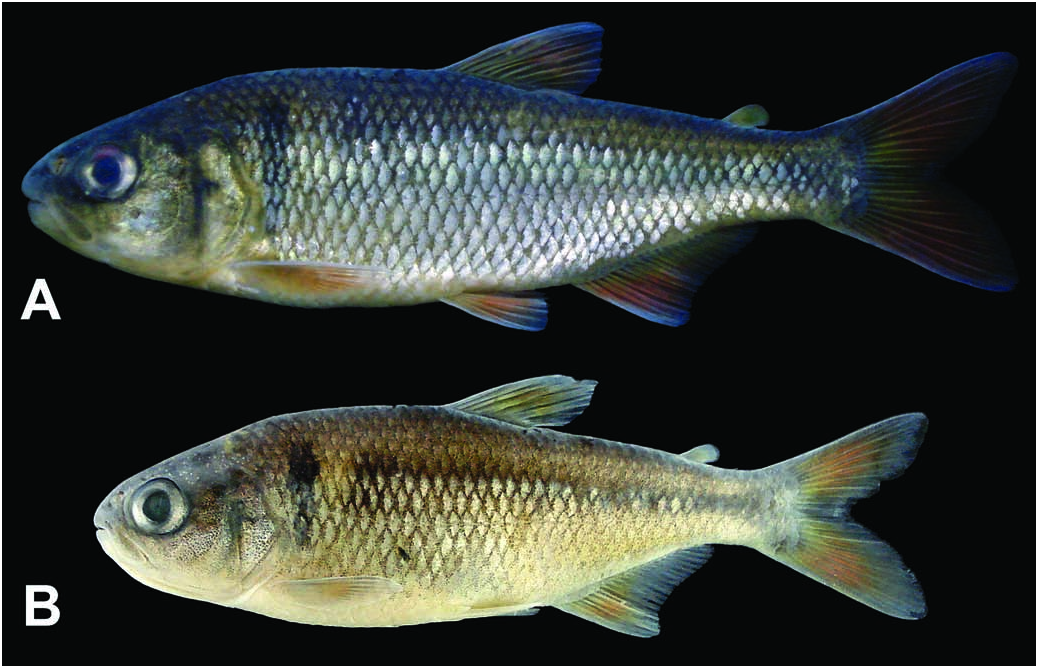 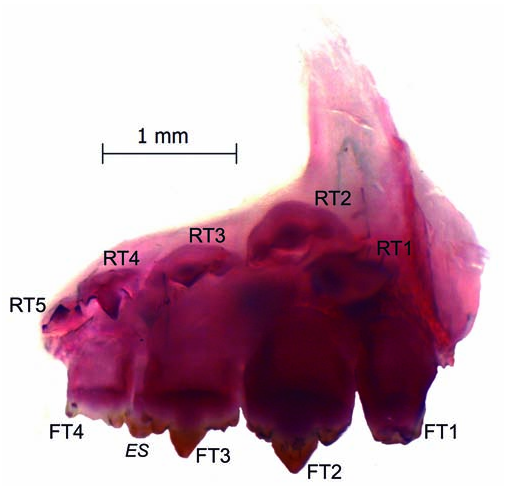