Ascalabotes sthenodactylus  was described very briefly by Lichtenstein (1823 b) in the catalogue of duplicate specimens from the collections of the Zoological Museum of Berlin (ZMB, now Museum für Naturkunde). The original description does not refer to any particular specimen, nor does it mention the number of specimens examined, and provides but a very imprecise type locality: “ Aegypt. et Nubia ” (= Egypt and Nubia).

Bauer and Günther (1991) and Bauer (2000) gave more detailed information about the specimens on which this name was based. According to these sources, Lichtenstein (1823 b) established this nomen based on specimens collected by Hemprich and Ehrenberg in Egypt and Nubia, some of which are still preserved in the Berlin museum. From these five remaining syntypes (Museum für Naturkunde, Berlin, ZMB 437 A –C and 438 A –B), Bauer and Günther (1991) designated specimen ZMB 437 A as lectotype of Ascalabotes sthenodactylus Lichtenstein, 1823  .

According to Bauer (2000), however, the nomen was based on Hemprich’s hand-written notes where he also detailed that the series of specimens that includes the lectotype originated from “Tscheile” (=el Achterieh, now Al Dukhaylach 31 °08’N 29 ° 49 ’E according to Bauer et al. 2003) or Abusiris (an archeological site located close to Burg El Arab 30 ° 55 ’N 29 ° 32 ’E). Thus, one of these two localities currently constitutes the type locality.

Upon examination of pictures of the specimen ZMB 437 A, kindly sent to us by M.- O. Rödel ( Fig. 1View FIGURE 1, photographs by F. Tillack), we realized that it presents traits characteristic of the species now called Stenodactylus mauritanicus Guichenot, 1850  : the snout profile is strongly convex and the nostrils do not project much (see Baha El Din 2006, which fully agrees with our own examination of a large series of specimens from North Africa, many of which genotyped by Metallinou et al. 2012). In addition, the localities where the lectotype could have been collected are both found in the mesic coastal Mediterranean areas west of the Nile delta, where, according to Baha el Din (2006) and Metallinou et al. (2012), only S. mauritanicus  occurs nowadays, S. sthenodactylus  occurring in more xeric habitats further inland.

It is therefore clear that the lectotype of Ascalabotes sthenodactylus  is a specimen of the species currently known as Stenodactylus mauritanicus  , in obvious contradiction to the prevailing usage of these names. According to the Code Article 75.6, an author who discovers that “the existing name-bearing type of a nominal species-group taxon is not in taxonomic accord with the prevailing usage of names” should maintain prevailing usage and request the Commission to set aside the existing name-bearing type and designate a neotype. Prevailing usage is defined by the Code as “that usage of the name which is adopted by at least a substantial majority of the most recent authors concerned with the relevant taxon, irrespective of how long ago their work was published”. All authors that have used both names as valid (usually as distinct subspecies of the same species) applied mauritanicus  to the northwestern taxon and sthenodactylus  to the southern and eastern taxon: see for ex. Baha El Din 2006; Bons & Geniez 1996; Leviton 1992; Loveridge 1947; Pasteur 1960; Sindaco 2008. Metallinou et al. (2012) provide an updated insight into the distribution patterns of the two species, through a large collection of genotyped samples.

We thus propose to maintain Ascalabotes sthenodactylus Lichtenstein, 1823  as the valid nomen of the taxon to which it has been applied until now and will apply to the Commission in due course to designate as neotype of Ascalabotes sthenodactylus Lichtenstein, 1823  a specimen of the eastern taxon for which this name has been used—to our knowledge—by all authors. 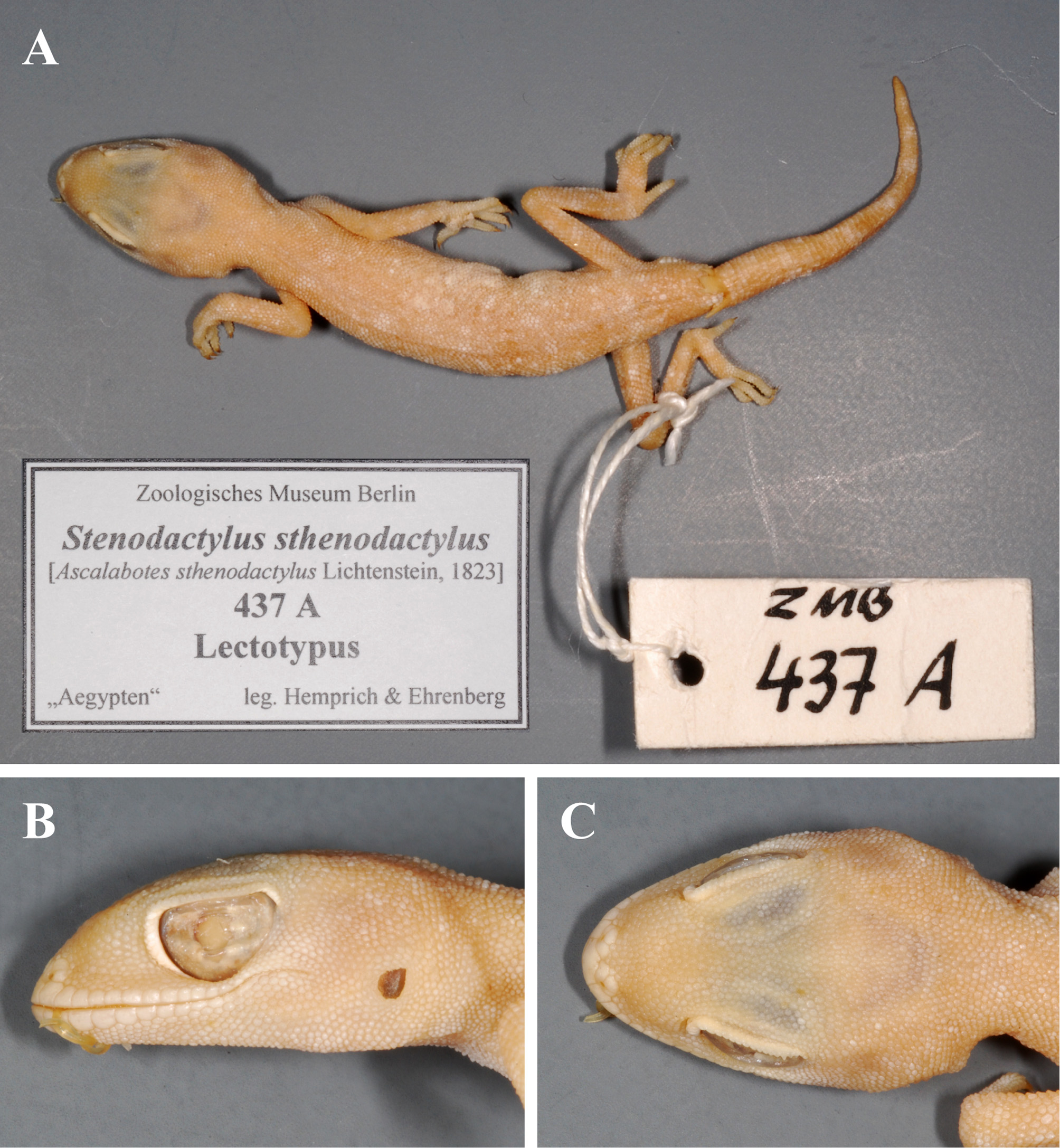