Remarks. For a comparison of this species with M. gallicolus   see the notes section of the latter. This species is very similar to M. banksianae Ray and Williams   , but the latter differs (characters in parentheses are of M. alabamae   ) by having 3, 4, or 5 rows of cicatrices (four rows), and occurs on Pinus banksiana Lamb.   in Minnesota (occurs on Pinus elliottii Engelm.   , P. taeda   L., and P. rigida Mill.   in the southeastern U.S.). The above description is based on 14 specimens from seven localities.

Type material. Type data: USA: Alabama, Calhoun, on Pinus   sp., March 16 and 31, April 21, 1902; collected by A.M. Troyer. Syntypes, female and first instar. Because Morrison (1939) did not specifically mention a holotype in the original description, the lectotype, designated here, is the single mounted adult female from the syntype series mounted on a slide and labeled as follows: left label: “9582 Matsucoccus   / alabamae/ Holotype / On pine/ Calhoun, Ala./ March 16, 1902 ” right label “ Matsucoccus   / alabamae   / Morrison/ lectotype / desig. by Ahmed et al. 2020 ” (deposited at USNM). In addition, there are 14 paralectotypes. Type depositories: AUMNH, UCDC, USNM. We have examined the lectotype and several of the paralectotypes deposited in AUMNH and USNM.

Remarks. For a comparison of M. alabamae   with M. krystalae   see the notes section of the latter. The above description is based on seven third-instar males from the following locality: Lee County, Auburn, Alabama, March 1, 1979, on Pinus   sp., C.H. Ray and I. Daniels, deposited in AUMNH.

Life history. The following information is from Ray (1982) based on observations made in Auburn, Alabama from November 1978 to April 1981. This species overwinters in the second-instar cyst beneath bark scales on the trunk of the host. In March, the third-instar males emerge from cysts, settle beneath bark scales and produce a waxy sac in which they molt to the fourth-instar pupa. Adult males emerge and begin to actively seek out females. Adult females emerge from the cyst, move to the outer surfaces of the tree trunk or between the edges of bark scales and extend the posterior end of their abdomen as far from the trunk as possible. Adult males run rapidly up and down the trunk and orient to the posterior apex of the female and copulate. After copulation is complete, adult females crawl beneath loose bark flakes, near a scar, or at the base of a branch and produce a waxy ovisac in which 501– 860 eggs are laid. Copulation is necessary for oviposition: confined females do not produce eggs. As females deposit eggs, their bodies contract and fold so that when all eggs are deposited, the females are reduced to less than 1/3 of their original size.

Distribution outside of Florida. Matsucoccus alabamae   was known only from Alabama but Ray (1982) reported it from Florida, Georgia, South Carolina, and Tennessee in his unpublished dissertation. Recently Ahmed and Miller (2020) reported it from Florida and confirm the Florida occurrence data herein. A new record for Virginia is provided by DRM follows: Bayville Farms Park, Virginia Beach, Virginia December 24, 2019, under bark of Pinus taeda, D. R. Miller   (2020-25).

Damage. This species has not been implicated in causing economic damage. 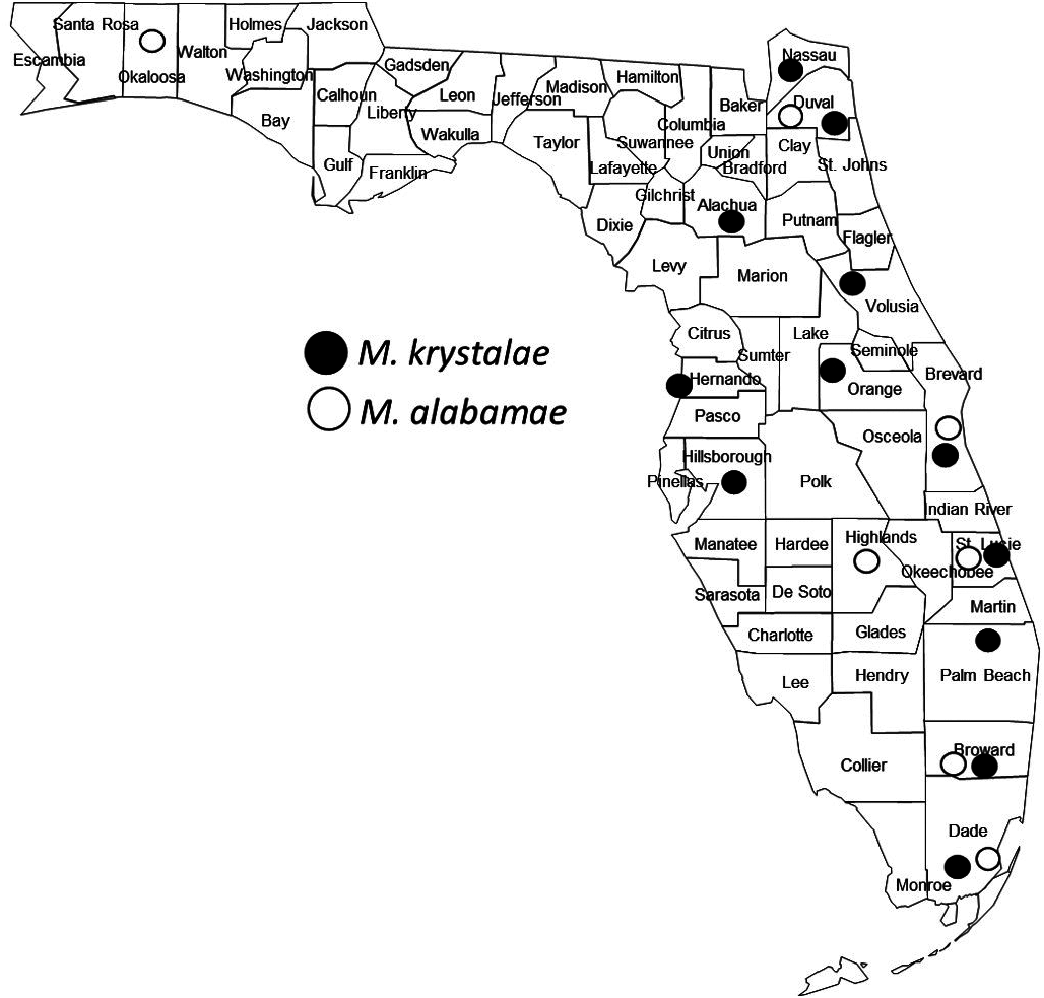