Etymology. The specific epithet derives from a combination of mas (L. = man) and pictus (L. = painted), alluding to the unusual bright colours of most males, which are often retained for long periods, even when sleeping at night.

Types. The type series comprises ten specimens all preserved in 50 % propanol (except for one hatchling in 90 % ethanol), including:

Meristics. Measurements for the type series of Rhampholeon maspictus  sp. nov. are summarized in Table 6.

Diagnosis. The Mt. Mabu Pygmy Chameleon is referable to the Rhampholeon  (subgenus Rhinodigitum Matthee et al. 2004) by possessing a short hemipenis that is almost bag-like, acalyculate and adorned with a pair of simple, curved apical “horns” with a variable number of thorn-like papillae arranged on the outer aspect of the horn; claws that are strongly bicuspid, smooth plantar surfaces, a rostral process, and short tail (<25 % of total length in adult males). It can be distinguished from most other species in Rhampholeon (Rhinodigitum)  by having deep inguinal (absent or indistinct in Rh. boulengeri  , Rh. nchisiensis  , Rh. uluguruensis  , and Rh. moyeri  ) and axillary pits (also absent in Rh. nchisiensis  ). It differs from all other members of the Rh. platyceps  complex by the bright green male breeding coloration, including blue flanks and side of head, and yellow throat, snout and eye ring (all of which may be retained even at night). It shares with Rh. platyceps  , but differs from all other populations of the complex from Mt Chiperone, Mt Namuli and Mt Inago, its large size (> 60 mm SVL) in both sexes, lack of male dwarfism, well-developed dorsal crenulations, and reduced rostral and supraocular processes; it differs from Rh. platyceps  by its more dorsoventrally flattened habitus (more rounded in Rh. platyceps  ), and very weak or even absent accessory plantar spines (present but small in Rh. platyceps  ). Finally, the species is also genetically well differentiated from all other Rhampholeon  , and all chameleons examined from Mt. Mabu form a monophyletic clade.

Description of Holotype. Adult male, viscera exposed by a single ventral incision in the chest region; both hemipenes everted.

Head: Dorsum of head flattened, with no upward flexure of the snout; casque flat with weakly define lateral crests; temporal crest moderate with a single row of interrupted large tubercles; parietal crest almost absent, composed of a few enlarged tubercles in the mid-line; supraorbital ridge present but with only few raised conical tubercles; three enlarged tubercles on inferior orbital rim; supraorbital connected in middle by shallow interorbital ridge composed of 11 small granular tubercles that demarcate the posterior edge of a prominent frontal depression; rostral ridge very well marked, forming a small bump over the nostrils and fusing anteriorly and adorned with a small rostral process (2.1 mm, in fixation flattened against rostrum); rostral process 4 small tubercular scales long and 4 tubercles wide at base; nares opening posterio-ventrally; no gular or mental appendages; scales on throat homogenous, more conical than those on crown of head and subequal in size to those on the belly.

Body: Dorsal crest moderately developed, comprised of 9 weak crenulations each comprised of a cluster of enlarged spinose scales, crenulations most strongly developed over mid-body, reduced over base of neck and tail; crenulations continue onto tail comprised of 9 small groups that are largest over the distal half of the tail; deep axillary and inguinal pits are present; flank scalation heterogeneous, composed of small, stellate granules with scattered, enlarged spinose tubercles, the largest occurring over the shoulder; chest, belly and lower surface of tail smooth; limb scalation more tubercular, with a few enlarged, spinose tubercles on the forearms; claws strongly bicuspid; accessory plantar spines very reduced or almost absent.

Colour in Life: Male coloration stunningly beautiful ( Figs. 5View FIGURE 5 A); body, tail and limbs leaf green, slightly mottled and also darker along the dorsal crest of body, tail and upper surfaces of fore- and hindlimbs; central region of flanks light blue, with two oblique, broad yellow-green stripes; light blue of flanks extends onto the side of head and around eye, where it becomes darker and more intense; front of chest, throat, labials, rostral process and upper surface of snout to the level of the orbit, dirty yellow; bright yellow eye ring. When stressed (e.g. in artificially close proximity to another chameleon) the body coloration changes dramatically, the body darkening to greenbrown, and the blue flank region becomes paler and infused with brown blotches ( Fig. 6View FIGURE 6 A); the green orbital region, yellow eye ring and dirty yellow throat colour are retained, albeit in subdued form.

Description of Allotype (as for holotype, unless noted): adult female, with viscera exposed by a single, ragged ventral incision in the belly, and liver tissue excised for DNA analysis.

Colour in preservative: Body and head uniform dark brown above and below.

Paratype variation. All paratype males have well-everted hemipenes. In life the orbital scalation of a male paratype ( R 17130View Materials) was light green, with a conspicuous yellow ring around the iris; the pale brown body had two prominent rust red “leaf vein” narrow lines that ran from the dorsal crest obliquely to the lower flank; there is a prominent enlarged, pale yellow-cream spinose tubercle on the fore-flank in the shoulder region; the crown of the casque and dorsal crest on the body and tail was medium brown ( Fig. 6View FIGURE 6 B). A very small specimen ( PEM R 18068View Materials, SVL 19.6 mm) has a mottled reddish brown head, body and limbs, with two vague, narrow oblique red-brown stripes that run from the dorsal crest to the lower flanks; the dorsal crest forms a narrow cream stripe that extends onto the casque, where it becomes disrupted into small blotches; the limbs are darker brown with scattered bright yellow tubercles of the upper surfaces; the orbital region is dull brown with scattered small blue tubercles and a dull red eye ring ( Fig. 6View FIGURE 6 C).

Sexual Dimorphism. The average total size of males (65.3 mm, n = 11) and females (64.4 mm, n = 11) is similar and suggests no sexual size dimorphism. However, males do have proportionately longer tails (TL as = % of SVL 24.0% in males, but only 18.6 % in females). Sexual dichromism in pygmy chameleons remains poorly known, and has not been studied in the Rh. platyceps  complex. Tilbury (1992) noted the emergence of bright colours (pale powder blue head and neck, and bright white eyelids) in male Rh. chapmanorum  in male-male interactions. The bold colours of large male Rh. maspictus  sp. nov. ( Fig. 5View FIGURE 5 A) was noted in three different males at the type locality, including two specimens sleeping at night on low vegetation. No female was observed showing the bright green body and blue and yellow head of adult males.

Hemipenis. (based on everted hemipenes of five males in the type series). Hemipenis short with unadorned basal and apical sections, except for a pair of curved horns that form the lateral edges of a prominent, flat-topped crown; 3-4 weakly-developed spines occur on the upper surfaces of the horns; the folds of the sulcus spermaticus flare to drain into the flattened apical region.

Distribution. Known only from the type locality; Mt. Mabu, Zambézia Province, central Mozambique, but expected to occur throughout much of the extensive forest (+ 7880 ha) remaining on the massif ( Bayliss et al. 2014).

Habitat. The Mabu massif is a complex of granitic inselbergs formed of syenite, an igneous intrusion of the younger Precambrian Namarroi series dating from 850 ‒1100 Mya (Instituto Nacional de Geologia 1987). Although the Mabu Massif shows vegetational zonation and a significant extent (+ 7880 ha) of mid-altitudinal forest, it lacks the large area of upland plateau that occurs on Mt. Namuli. Mt. Mabu is surrounded by Brachystegia  woodland at the base, much of which is replaced to the south by the Cha Madal tea estate. The paratype series were collected at night on perches from 30-100 cm above ground in forest clearings and adjacent to a mountain stream ( Fig. 6View FIGURE 6 D). No specimens were collected on perches as high as 1.3 m to 5 m noted for Rh. chapmanorum ( Tilbury 1992)  . This may be related to the presence of an additional chameleon ( N. baylissi  ) which utilizes this forest stratum on Mt. Mabu, and that has not been recorded on Mt. Chiperone.

Reproduction. The female allotype was gravid with seven almost spherical eggs (largest diameter 4.1-4.5 mm, four in the left oviduct and three in the right oviduct) that lack obvious signs of embryonic development. 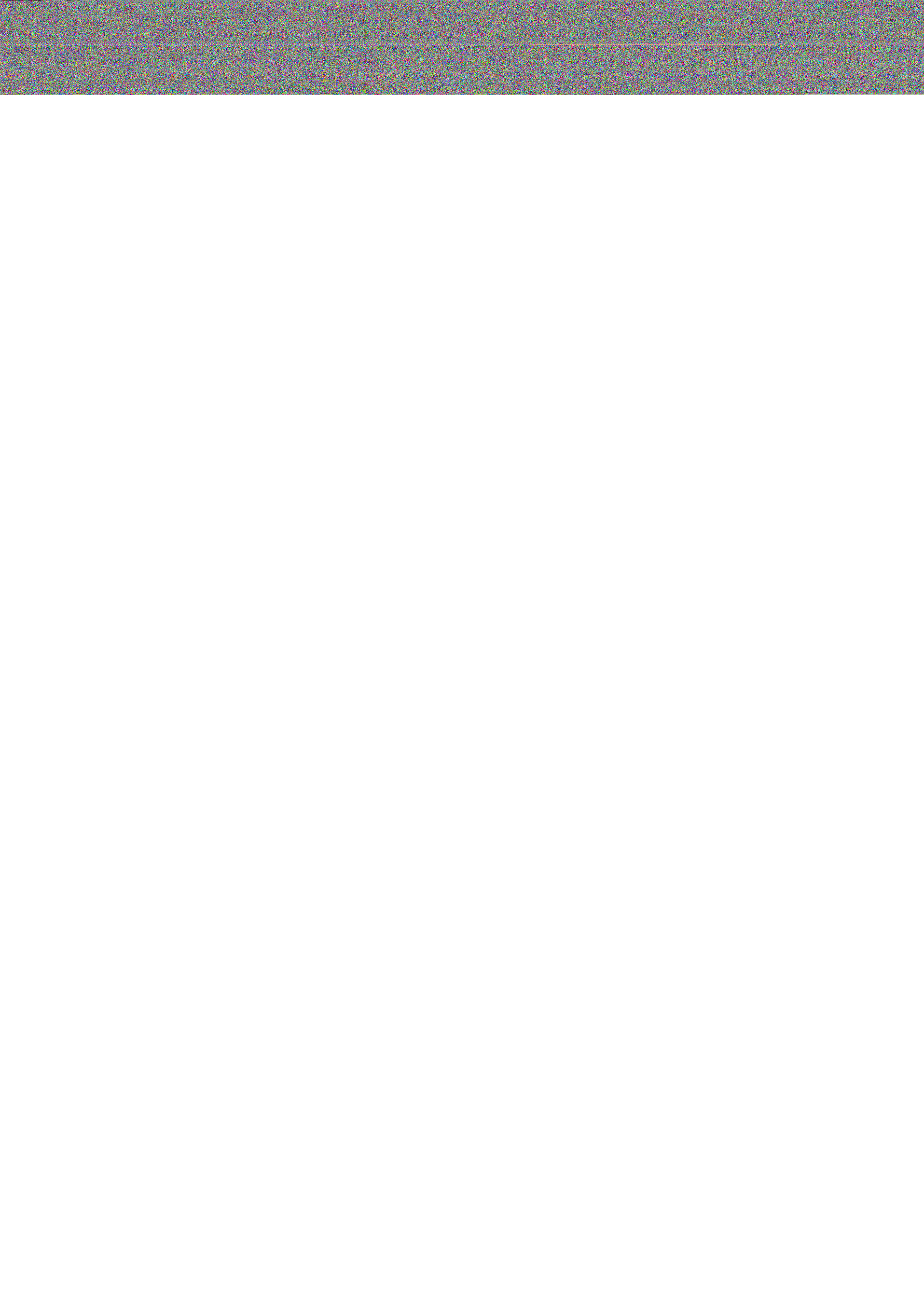 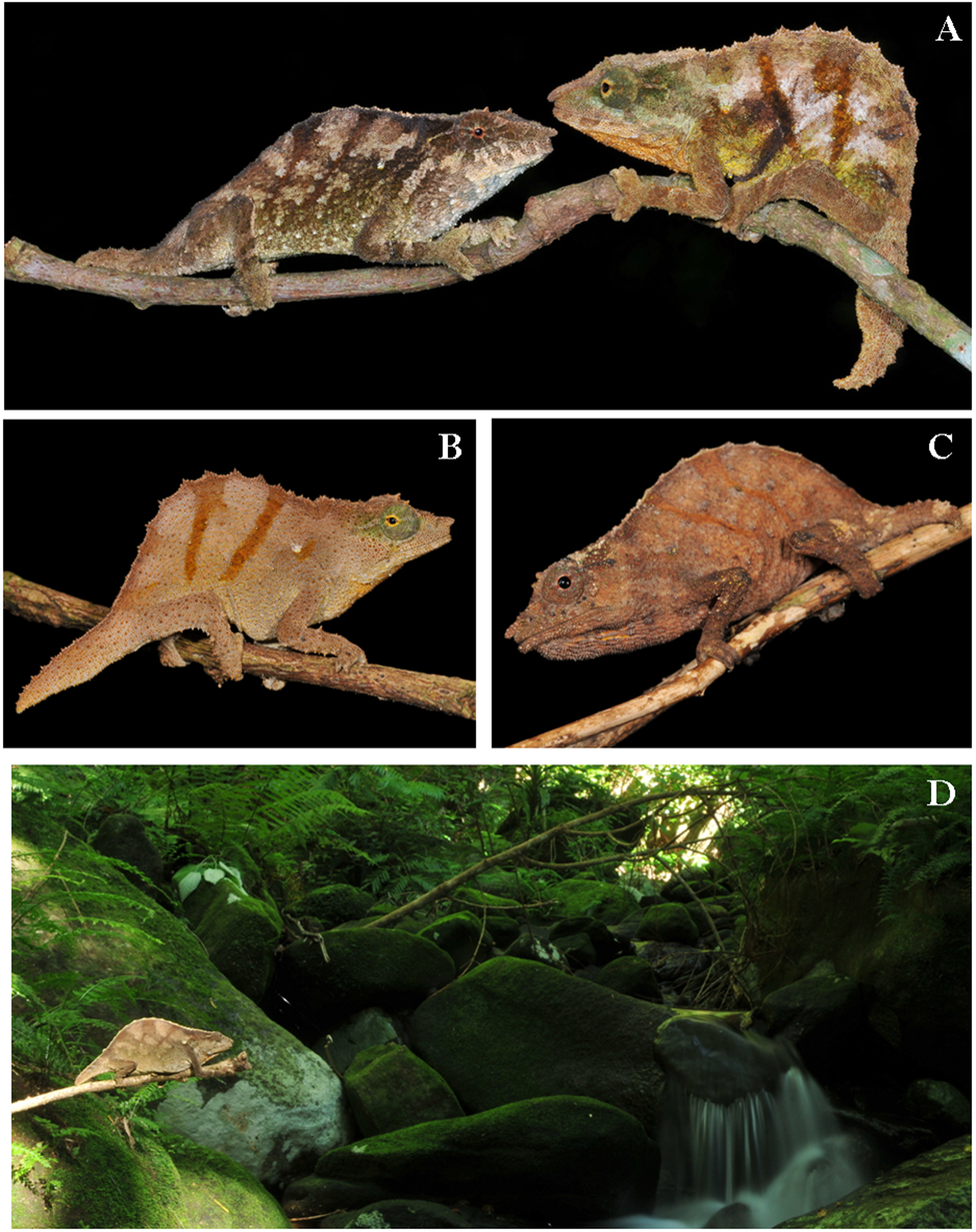