Etymology. This species is named in honour of Danish entomologist Dr Thomas J. Simonsen, in recognition of his recent work on the Australian Hepialidae . A noun in the genitive case.

Diagnosis. This is the only Aenetus species and the only member of the Hepialidae known from Top-End NT. Males of A. simonseni sp. nov. can be distinguished from A. thermistis ( Figs 3–4 View FIGURE 1–6 , 8 View FIGURE 7–8 , 12–14, 19, 22 View FIGURE 9–23 , 27–29 View FIGURE 24–29 ) of eastern Queensland by the blue or blue-white hindwings in contrast to broad swathes of pink along the costal, tornal and inner margin of the hindwing (not so obvious in faded or old specimens). The forewings are generally more aqua-green than A. thermistis but this is subject to variation. In the forewing, the anterior edge of the medial line is whiter and posterior edge a darker more defined green. The valvae of the male genitalia are proportionately larger and the apical, medial and basal hooks are more evenly spaced, with the apex flattened. A thickened portion of the sacculus is nearly confluent with the basal hook, while in A. thermistis this is represented only as a small knob. There are also differences in general proportions and shape of the vinculum, where the lateral margin is more incurved and posterior projections shorter. The intermediate plate has 2-3 deep grooves on the dorsal edge while it is smooth in A. thermistis . Pseudoteguminal twin processes are shorter, projected farther back on the basal rim. The disto-posterior margin of the pseudotegumen is broader, and rounder. Sternite 8 in A. simonseni sp. nov. is almost twice the size of that of A. thermistis , and with the sclerotised region more extensive, posterior projection shorter and flanked by a small dentation before the postero-lateral corners, which are pointed in this species but rounded in A. thermistis . Females are also externally similar to A. thermistis , however, A. simonseni sp. nov. has more numerous brown scales on the legs, while the wings are generally ‘cleaner’ and the spots in the centre of the medial area are smaller—however these are features subject to variation and the most reliable method is dissection of the genitalia, where the antevaginal lamella differ significantly particularly in the medial area with three indentations on the posterior margin, whereas there are only two in A. thermistis , which has the apex flattened. Lateral lobes are smooth, while in A. thermistis they have two indentations. The bursa copulatrix is distinct, with the diverticulum comparatively shorter than in A. thermistis , and the apex of the corpus bursae, though broad, is less round than in A. thermistis . Aenetus simonseni sp. nov. can be distinguished from Aenetus nr. tegulatus as examined from Indonesia and the Torres Strait, Qld (sensu Grehan et al. 2018; see methods) by female genitalia, where in A. nr. tegulatus the medial area of the antevaginal lamella is broad and with two indentations, closer to that of A. thermistis , and the bursa copulatrix is distinct, with the diverticulum narrower, pointed at the apex and closer to equal in length to the corpus bursae, which is further rounded at the apex. Males of A. simonseni sp. nov. are somewhat similar to A. eximia (Scott) but are distinguished by eighth sternite shape, which is smooth-sided and not anteriorly dentate, and by general proportions and shape of the valva, in which A. eximia has the medial hook longer. The two species also differ by the presence of brown scales on the legs and FW costa of A. simonseni sp. nov.. Aenetus sumatraensis Grehan, Witt & Ignatev, 2018 and A. nr. tegulatus lack scales on the dorsal surface of the antenna, present in both sexes of A. simonseni sp. nov. and A. thermistis . Differences between A. simonseni sp. nov. and A. maiasinus sp. nov. are covered under that species.

Variation. Exact position and shape of medial line on forewing, extent of pink scales on anterior half of abdomen, extent of brown scales on forelegs as well as the width of the brown spots along costa is variable. General ground colour ranges from grass green to greyish blue, with living specimens often appearing brighter than museum specimens where fading may occur..

Variation: Like all other species in the A. tegulatus group, A. simonseni females have two distinct colour forms, one with the forewings, thorax, legs and abdomen apex grass green ( Fig. 8 View FIGURE 7–8 ), and the other colour form with these areas a dark rusty-brown ( Figs 59, 61 View FIGURE 59–61 ). The green colour form is more common in collections, and is the basis for the description.

Biology and phenology. Adult flight time is associated with the wet season, where adult emergence occurs during or just after rainfall from the 25 th of November to the 30 th of January. The species has been taken at light in monsoon rainforests particularly near swamps, creeks, in riparian or coastal situations ( Fig. 64 View FIGURE 64 ) and larvae have been reared from the stems of Grewia breviflora Benth. ( Tiliaceae ) (David A. Lane pers. comm).

Remarks. This species is known only from the northern coastal regions and this may reflect a higher rainfall requirement as suggested by Simonsen (2018: plate 48B). The species is generally widespread in the top-end of the Northern Territory, where monsoon rainforest can be found in discrete patches within a vast area of 500,000 km 2 that are concentrated and most floristically diverse in the northern coastal regions ( Russell-Smith and Lee 1992) where rainfall is highest. The general dearth of specimens likely reflects an absence of targeted collection rather than a true absence, as Australian members of this genus are usually uncommon at light and synchronise a short flight time with specific weather events.

Though specimens have been photographed mating ( Figs 59–61 View FIGURE 59–61 ), courtship behaviour has not been observed. The presence of meta-tibial androconial scales of the male, along with the distinctive saccharine scent discernible from living or fresh male specimens suggests that pheromones play a part in the mate attraction or courtship of Aenetus species ( Common 1990). Scales with lustrous iridescence are present on entire ventral surface of the forewing and hindwing of A. thermistis males and females, but both wings only in the female of A. simonseni while these scales are restricted to the forewing of the male. Comparatively large eyes may indicate a high visual acuity, this coupled with the dimorphism of iridescent scales on both sexes but particularly so in the female could suggest that a component of their courtship is visual as well as chemical. The Eurasian Hepialus humuli (Linnaeus) also have iridescent scales on the wings, as well as hind tibial androconia in the males, and employ a visual courtship strategy ( Anderson et al. 1998). Further dedicated study into the behaviour of Aenetus in general is required to document their courtship behaviour. Interspecific variation in eye size and degree of dimorphism, as well as variation in androconia extent (with the latter present in both sexes of A. montanus Tindale, 1953 and A. ombraloma ( Lower, 1902)) may suggest some level of interspecific variation in courtship behaviour. 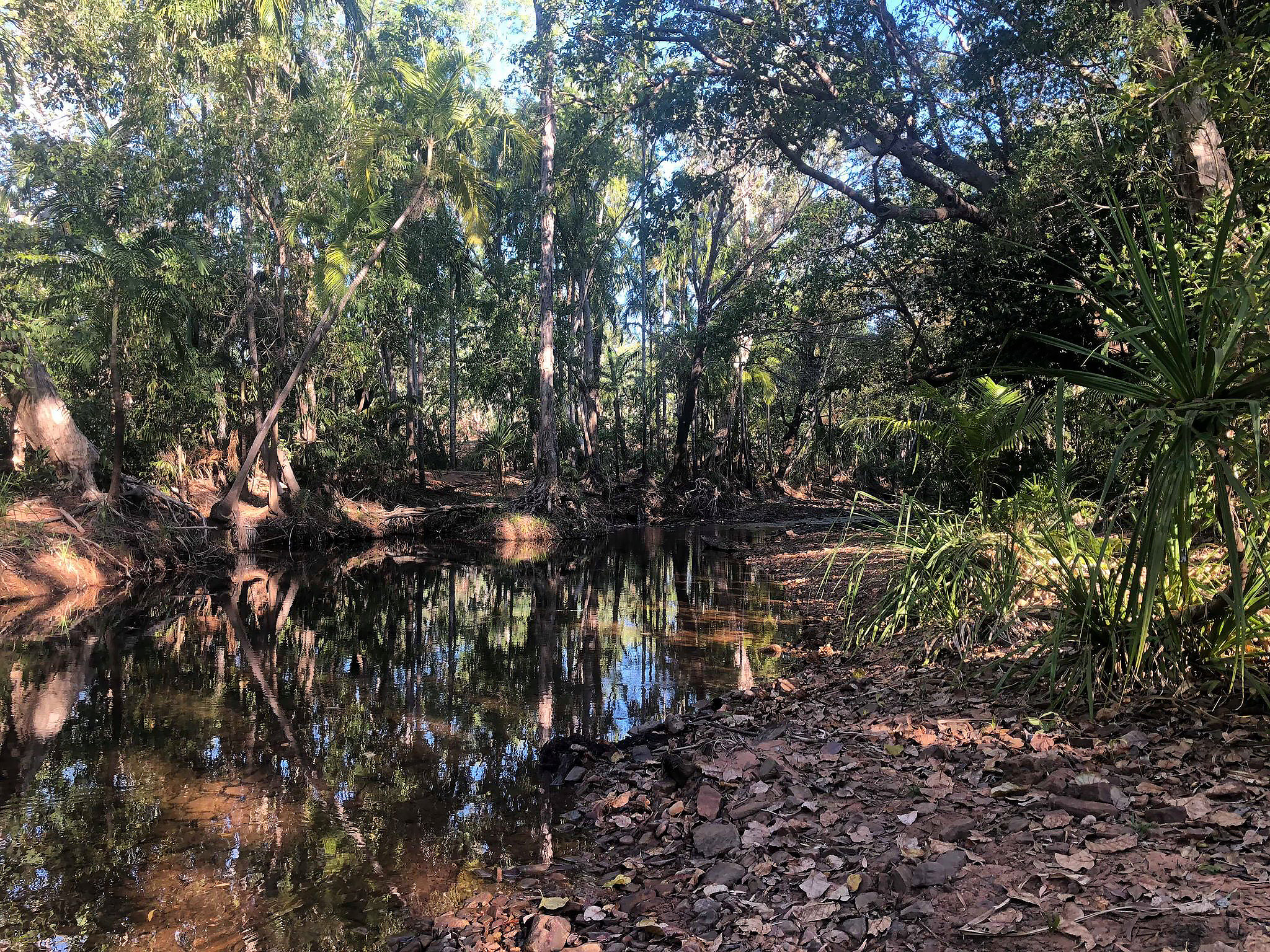 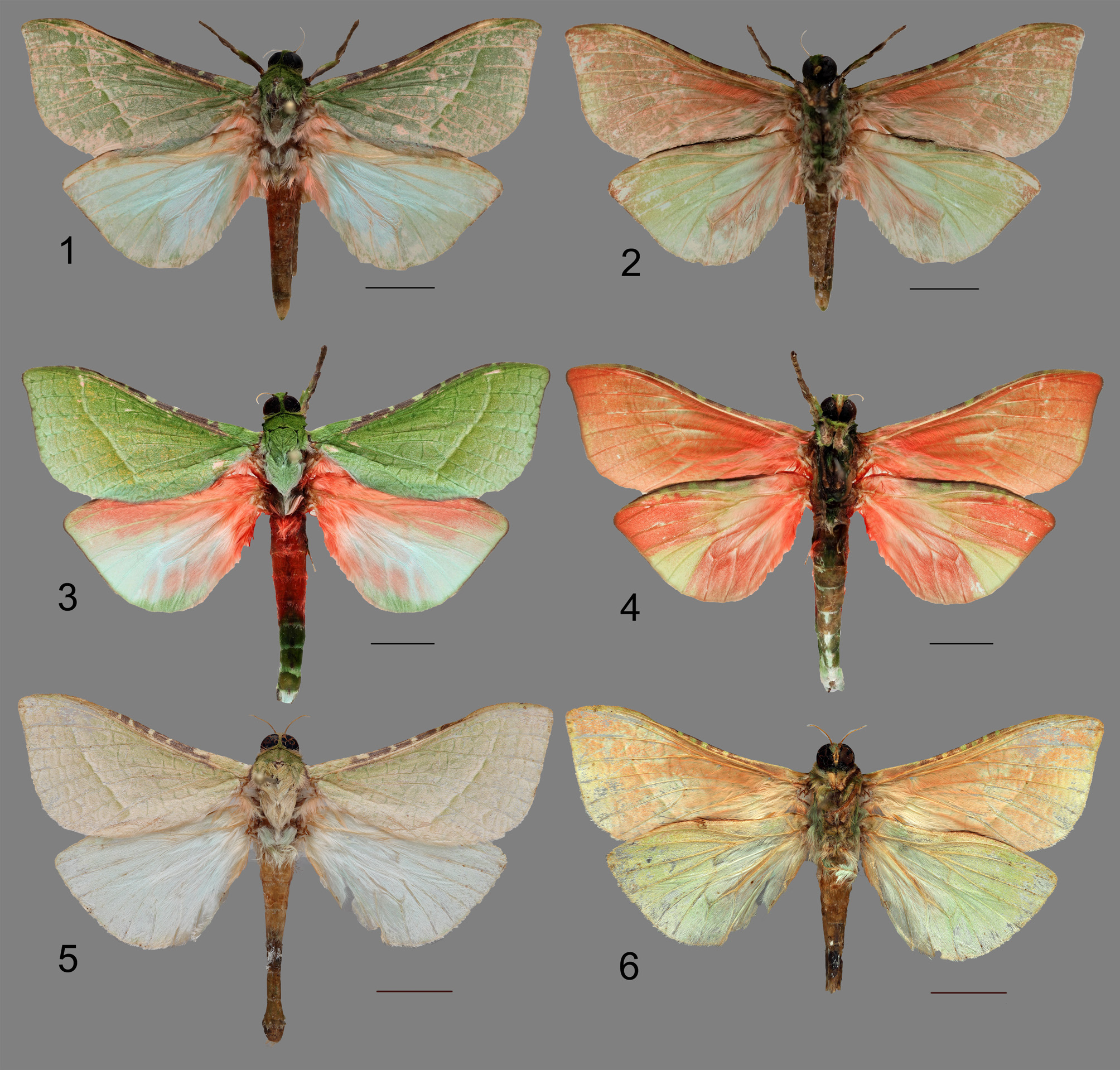