Colony encrusting, multiserial, unilamellar or multilamellar as the result of frontal budding, sometimes tubular (“hemescharan”) growing around arborescent epibiota such as hydroids. Colour varying from white (at growth tips) to red and purple/ brown in the older, multilamellar regions.

Ovicells not present in type specimen. In topotype material ovicells are globular, rounded, recumbent on the distal zooid, and have surfaces completely covered by pores but lacking radial ridges.

Like S. unicornis   , the introduction of S. errata   is somewhat confused. Waters (1878) first mentioned the name in a study of cheilostome opercula. A more thorough and recognizable description was subsequently provided by Waters (1879), in which reference was made to a particular specimen described as “Stadium, Hemeschara   ” (i.e. with a tubular colony-form). It is very likely that Waters was referring to the same material in both publications. Hastings (1967) revised the synonymy of S. errata   and attempted to designate a lectotype. However, she listed this putative lectotype under the Manchester Museum catalogue number HII86, a catalogue number prefix used for the entire Waters Collection at the museum. Fortunately, a specimen matching the descriptions of Waters (1879) and Hastings (1967) was found in the MM and has been examined by SEM.

This description draws attention to the notable differences in zooidal morphology at different astogenetic and ontogenetic stages. This has no doubt been a cause of taxonomic confusion in past descriptions, which have often focused on zooids from any of the following three growth stages: (1) basal zooids of the unilaminar “primogenial” stage; (2) frontally budded zooids at early ontogenetic stages with minimal secondary calcification; or (3) frontally budded zooids at late ontogenetic stages with heavy secondary calcification of the frontal shield.

The true identities of S. errata- like specimens from places distant from the type locality remain open to question. The ability of S. errata   to foul man-made structures, such as gas rigs ( Relini et al. 1998) and ships ( Ryland 1965; Gordon and Mawatari 1992) has no doubt mediated its transfer to ports around the world, where it has become highly invasive ( Hayward and McKinney 2002). Furthermore, the opening of the Suez Canal in 1869 may have played a role in its transfer between the Mediterranean and the Red Seas ( Eitan 1972). However, as highlighted by Winston (2005), it is possible that S. errata   is part of a species complex that includes S. pungens (Canu and Bassler, 1928)   and S. isabelleana (d’Orbigny, 1842)   . To complicate this issue further a subspecies called S. unicornis floridana (Osburn, 1914)   has been recognized in a number of works ( Maturo 1957; Banta 1971, 1972; Soule at al. 1995). The origin of this species complex may have predated anthropogenic exchange, with species morphologically similar to S. errata   being present in the Pliocene deposits of North Carolina and Jamaica ( Taylor and Foster 1998). Redescription of the type material here should aid in deciding whether fossil material and that of S. pungens   belongs to the same species. Fossil material of S. errata   has not been found in any of the European deposits during the course of our investigation. Therefore, it may be the case that this species has been introduced anthropogenically or otherwise into the Mediterranean in recent times. However, because of high levels of intracolonial morphological plasticity, it is likely that the true identity of the Recent S. errata   complex will only be confirmed using molecular techniques.

No ancestrulae were apparent in either the lectotype or associated material. However, according to Ryland (1965) and Hayward and Ryland (1999), these are tatiform and have eight oral spines. 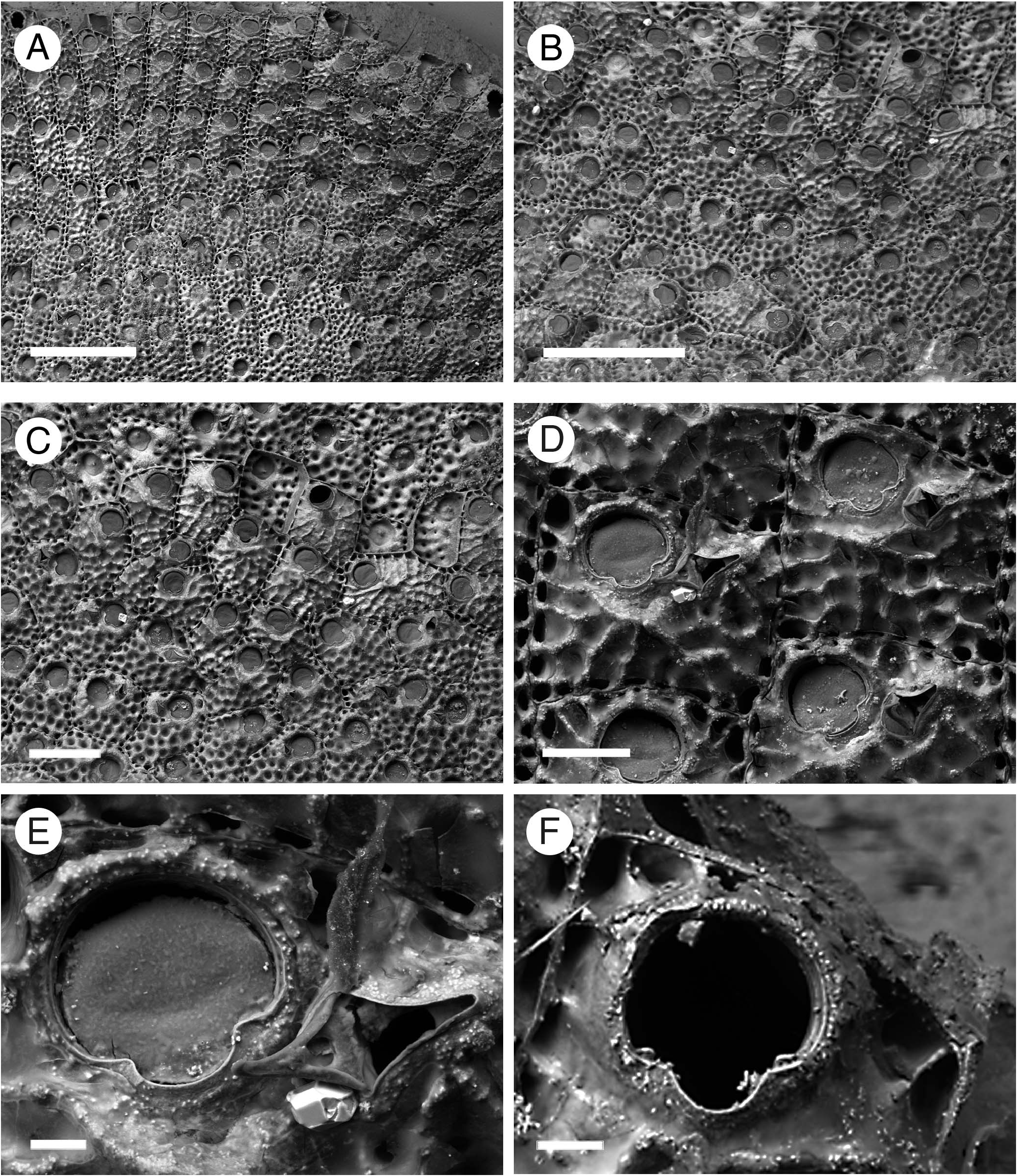 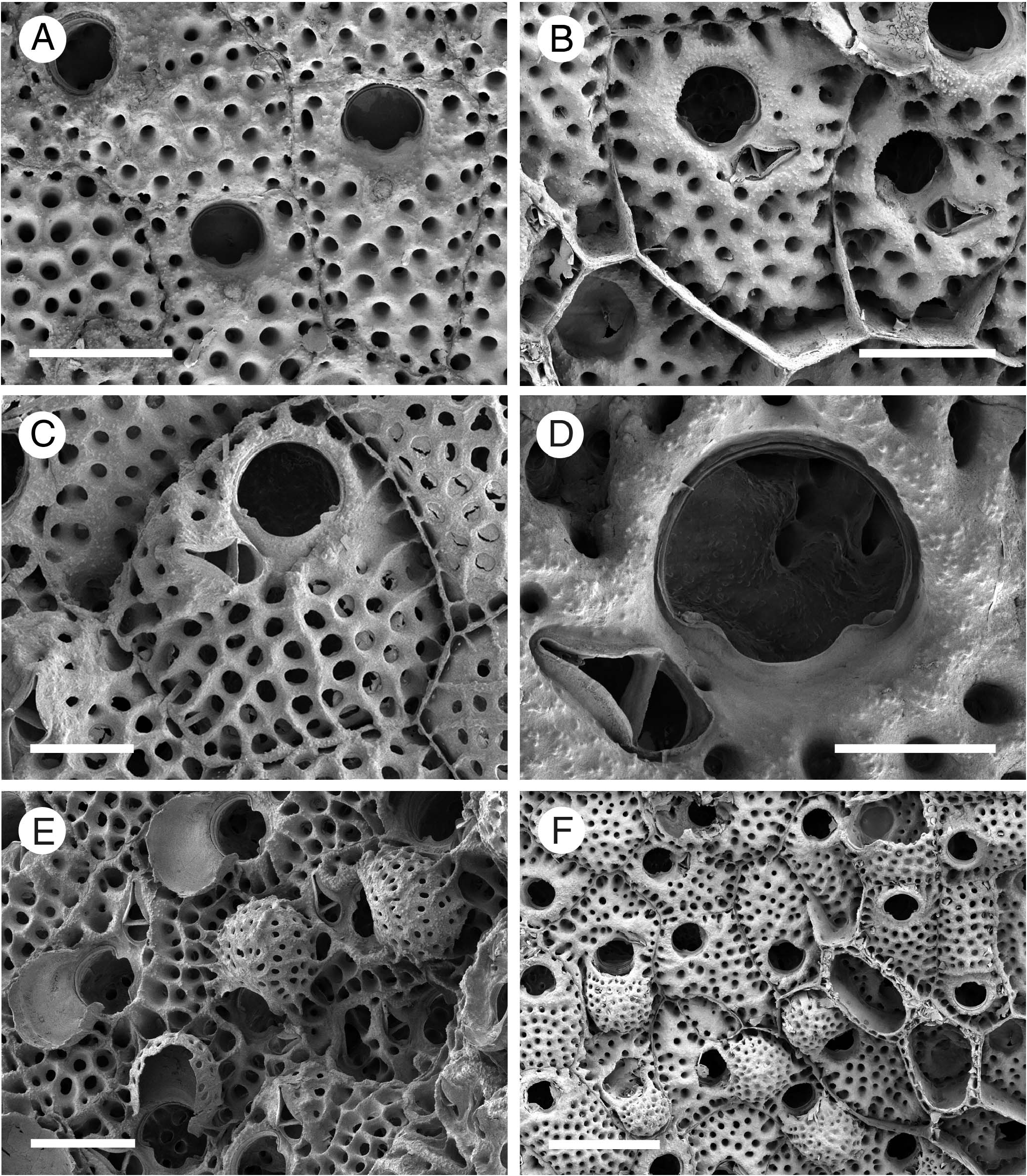 Figure 4. (A, B) Topotype of Schizoporella errata (NHM 2009.1.26.1). (A) Primogenial autozooids growing in unilamellar form. Later astogeny with secondary calcification of frontal shield. (B) Frontally budded autozooid in the process of budding a daughter zooid. Later astogeny with secondary calcification of the frontal shield. (C–F) Topotype (NHM 2009.1.26.2). (C) Frontally budded zooid in early astogeny with a polygonal shaped border around each pseudopore. (D) Detail of the primary orifice with its small condyles and the distolaterally directed adventitious avicularium. (E) Ovicells in various stages of development, with a completely porous surface. (F) A group of autozooids undergoing frontal budding. The frontal shield has been removed in some cases to reveal the occluded primary orifice of the basal zooid. Scale bars: 250 µm (A, B, E, F); 150 µm (C); 100 µm (D).