Diagnosis. Multibranched, bushy colonies reaching a size of 2 m or more ( Fig. 1 View FIGURE 1 A), with long plumose fronds. Branches and branchlets free and not anastomosing. Highest order branchlets usually less than 1 cm long and inclined distally; tending to be arranged bilaterally and alternately, five to six per centimeter, but not strictly uniform in orientation. A small number of additional branchlets coming off at various angles to the lateral branchlets. Spines small, conical, smooth, mostly 0.07–0.09 mm in height, with a rounded apex. Polyps usually 1 mm to 1.4 mm in transverse diameter ( Fig. 1 View FIGURE 1 B), with relatively short, blunt tentacles. Color of living colonies white, gold/orange, pinkish­orange, pink, red, or reddish­brown.

Description of the holotype. The specimen selected as the holotype was white in color when alive. It is in two pieces (the larger part is shown in Fig. 2 View FIGURE 2 A), and the combined estimated height is 51 cm. The width is about 75 cm, and the diameter of the stem near its basal end is about 5.4 mm. The corallum is branched to the seventh order. Several main branches are 50 cm or more in length and about 4.8 mm in diameter at their basal end. Branches arise irregularly at various points along the stem and lower order branches, extend out on all sides, and are generally directed distally relative to the lower order branches from which they arise.

Many of the terminal branchlets are arranged bilaterally and in an alternate pattern of varying regularity ( Fig. 2 View FIGURE 2 B). Branchlets also occur randomly on the front and back sides of the branches. These additional branchlets develop at various positions relative to the lateral branchlets; in places, they are at right angles to the plane containing the two lateral rows and sometimes confined to only one side of the branch, thus giving the appearance of three rows of branchlets.

The spines are conical, smooth, with a narrow, but slightly rounded apex ( Figs 3 View FIGURE 3 A –D). They are usually inclined distally, but some individual spines may slant downward towards the base of the branchlet. The spines range in size from about 0.07 mm to 0.09 mm (as measured from the tip to the center of the base). The polypar spines are slightly larger than the abpolypar spines, and they tend to be directed more horizontally than the abpolypar spines. Spines near the tips of the branchlets often have the appearance of being strongly inclined distally, with a flared base ( Fig. 3 View FIGURE 3 A). Four to six rows of spines are visible in lateral view (excluding rows in which the spines are only partially visible), and within each row the spines are spaced mostly 0.21–0.27 mm apart (range 0.19–0.30 mm). The spines on the larger branches are similar in size and density to those on the smaller branchlets but appear more acicular ( Fig. 3 View FIGURE 3 D). The spines on the stem are similar to those on the larger branches.

The polyps ( Figs 2 View FIGURE 2 C –D) are 1–1.4 mm in transverse diameter. On the branchlets they are arranged uniserially, with seven to nine per centimeter along the axis. The polyps do not have the same orientation from branchlet to branchlet; therefore, the corallum, as a whole, does not have a polypar and abpolypar side. Small polyps are sometimes interspersed between the larger ones. In the preserved material the polyp tentacles are short and have a blunt, rounded apex. On the larger branches the polyps are not arranged as uniserially as those on the branchlets, and some occur on opposite sides of the axis.

Description of pinkish­orange color variant. As noted above, this species occurs in color forms other than white. A specimen ( USNM 1026794) reported to have a pinkishorange color when alive will be described here in detail for comparison with the white holotype. The corallum ( Fig. 4 View FIGURE 4 A) is about 47 cm tall and about 35 cm wide. There are two holdfasts and two stems, both extending to the top of the corallum. Both stems have a basal diameter of about 3.7 mm. The corallum is branched to the fifth order. The largest branch is 30 cm long and about 2.0 mm in basal diameter. Branches tend to form pinnulated fronds 3–4 cm wide, but these may be up to 10 cm across in cases where the branchlets are developed into branches.

As in the white variety, the smallest branchlets of the paratype are arranged primarily bilaterally and alternately ( Fig. 4 View FIGURE 4 B), the two lateral rows often nearly opposite each other (interior angle close to 180 º). The terminal branchlets are up to about 1 cm long before becoming sub­branched. Branchlets that are 0.4–0.6 cm in length are 0.3–0.4 mm in thickness at the base (excluding the spines); those 1 cm long are about 0.8 mm thick, and those 1.6 cm long are about 1.3 mm thick. The branchlets are for the most part directed distally, with the distal angle usually 40­50 º. The density of the terminal branchlets is very similar to that of the holotype, with 5–8 per centimeter.

The spines on the branchlets and branches ( Figs 5 View FIGURE 5 A –D) are very similar in size and shape to those in the holotype; i.e., slightly unequal in size around the circumference of the axis, with those on one side more horizontally directed than those on the opposite side. The height of the spines ranges from about 0.08 mm to 0.11 mm. Four rows of spines are visible in lateral view, and within each row the spines are usually spaced 0.24–0.28 mm apart. The spines are not much larger or more densely arranged on the larger branches ( Fig. 5 View FIGURE 5 D). The polyps ( Fig. 4 View FIGURE 4 C) are 0.9–1.1 mm in transverse diameter, with 9–10 per centimeter along the axis.

Overall, there are no substantial differences in morphology of the corallum, spines and polyps between this pinkish­orange form and the white holotype.

Remarks. Several other specimens were available for study; one white­colored specimen from Delta Dive 5850; one gold­colored specimen from Delta Dive 5871 and one of the pink variety from Delta Dive 5848. The white and gold specimens are similar to the holotype in the length, thickness, and density of the terminal branchlets, in the size of the spines (mostly 0.08–0.09 mm), and in the size and density of the polyps (about 1.2 mm in transverse diameter, with 8–10 per centimeter). The pink specimen from Delta Dive 5848 is also similar in the size and density of the terminal branchlets and in the size and the density of the spines; however, the polyps were found to be larger than those in the other specimens. The polyps are up to 1.7 mm in transverse diameter with only 6–7 polyps per centimeter, whereas those in the pinkish­orange paratype from Delta Dive 6145 were no more than 1.1 mm in transverse diameter, with 9–10 polyps per centimeter. Although polyp size in antipatharians can vary somewhat even within a single colony, this character also has been used as a key indicator to differentiate closely related species. The significance of the difference observed here requires further study to determine if it is consistent and can be correlated with other morphological characters.

Comparisons to other species. Based on the general arrangement of the smallest branchlets, on the morphology of the spines and the size of the polyps, the new species resembles several species reported from off the southern tip of South America. These species, originally described by Brook (1889) as Antipathella speciosa   and A. minor   , differ, however, from the new species in having a corallum which is flabellate and reticulate with adjacent branchlets fused together to varying degrees. Brook (1889) reported that in A. minor   the branches and branchlets form long narrow pinnate fronds “rarely more than 2 cm across the pinnae”. Based on a reexamination of part of the type specimen, it was determined that the branchlet density in A. minor   is 7–10 per centimeter, the spines are 0.05–0.1 mm tall, and the polyps are about 1 mm in transverse diameter, with 7–9 polyps per centimeter. In A. speciosa   the density of the branchlets is 9–11 per centimeter, and the spines are 0.08–0.1 mm tall. Polyps were not present on the type of A. speciosa   . Thus, in the size of the spines and polyps these two species are very similar to A. dendrochristos   n. sp. Differences exist mainly in the growth form of the corallum, and in the density of the terminal branchlets ( Fig. 6 View FIGURE 6 ). In A. dendrochristos   there are usually no more than 5–6 lateral branchlets per centimeter (excluding the branchlets that sometimes occur on the front and back sides of the axis).

Affinities. Many species of the genus Antipathes   are characterized by polyps which, when alive and fully expanded, have relatively long, pointed tentacles, often with the sagittal tentacles larger than the laterals and set lower on sides of the polyps. Sometimes this appearance is maintained in specimens preserved in alcohol; however, often the polyps and tentacles become strongly contracted. Photos of living polyps of A. dendrochristos   ( Fig. 1 View FIGURE 1 B) suggest that the polyp tentacles are typically short and blunt. The polyps of A. minor   , although preserved in alcohol, have a similar appearance to those of A. dendrochristos   . The spines of A. dendrochristos   , as well as those of A. speciosa   and A. minor   , are generally conical whereas the more typical members of the genus Antipathes   often have spines that are triangular in outline and laterally compressed. These differences are suggestive that A. dendrochristos   and related species may be taxonomically distinct from the more typical species of the genus. This supposition will be further evaluated by means of molecular techniques in which DNA sequencing of specific genes will be compared across species. This analysis may also shed some light on the significance of the different color morphs of A. dendrochristos   . Based solely on morphological characters, these color variants are difficult to distinguish in the laboratory; however, differences in the size of the polyps described above for the pink variant from Delta Dive 5848 may prove to be more than intraspecific variability.

Ethmology. An arbitary combination of letters; an allusion to the popular common name "Christmas tree coral"; used as a noun in apposition; gender feminine.

Distribution. Known only from the type locality and adjacent areas of the southern California Bight. 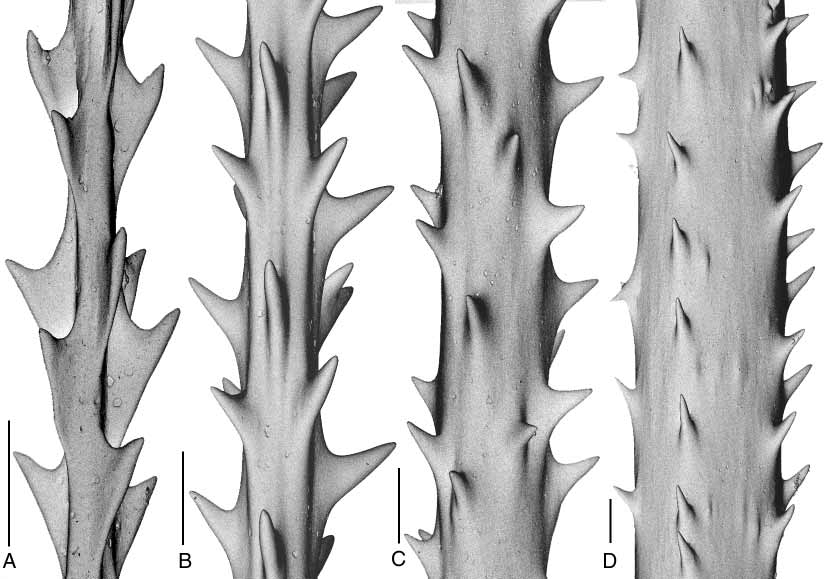 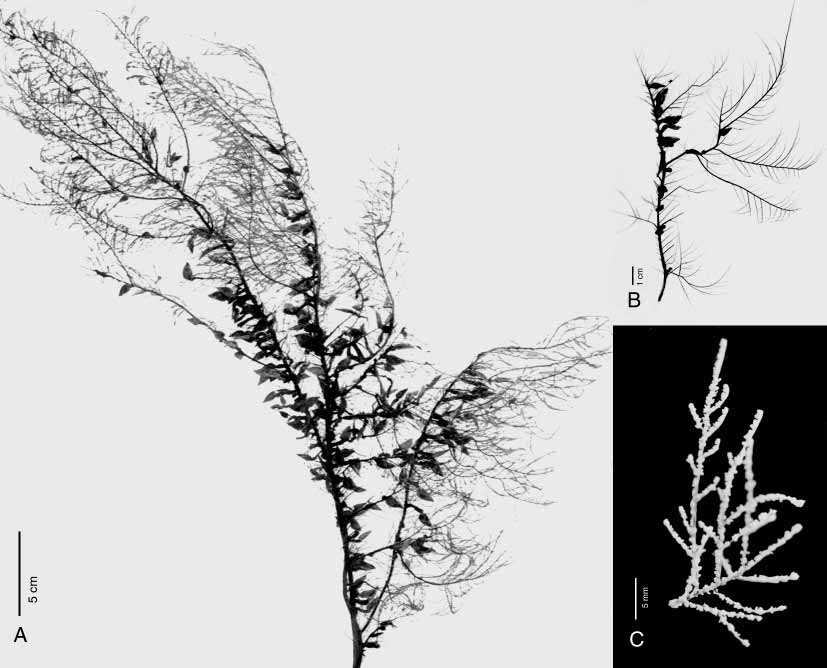