Diagnosis. An extremely miniaturised frog assigned to Mini   gen. nov. on the basis of its small size, curved clavicles, laterally displaced and reduced nasals, and fusion or loss of carpal 2. This assignment is supported by its genetic affinities ( Fig 1 View Fig 1 ; [ 15, 17, 20]). It is separated by uncorrected p-distances of 10.0–11.2% in the analysed 3’ fragment of the 16S rRNA gene from other members of the genus Mini   gen. nov., and 8.3–12.4% from all members of the genus Plethodontohyla   .

Within the genus Mini   gen. nov., the new species is unique in lacking teeth, and possessing a strong lateral colour border. See other species described below for respective diagnoses.

After four years in 70% ethanol, the dorsum is metallic silver centrally on the trunk, bluish silver on the head, and laterally light silver, with dark oblong markings in the inguinal region ( Fig 2 View Fig 2 ). There is a strong dorsolateral colour border to the ebony lateral colouration, extending from the side of the head to the legs. The lateral colouration fades to the more burnt umber ventral colouration, especially dark anteriorly, flecked with beige, fading posteriorly through larger fleck sizes to beige at the posterior abdomen. Dorsally, the legs are mottled cream and grey brown with a dark cloacal region. Ventrally the legs are brown flecked with beige. The arms are silvery dorsally and ebony laterally and ventrally. Colour in life ( Fig 4 View Fig 4 A–4C) as in preservative but browner in every aspect and less obviously iridescent, with a red iris.

Bioacoustics. Calls recorded from specimen ZMB 81993 View Materials ( Fig 5A View Fig 5 , Table 2 View Table 2 ) during the day on 28 March 2012 (see paratype section for locality data). Air temperature was 21.7˚C. The specimen was calling under dense leaf litter. Estimated call parameters were as follows (n = 35 in all cases except inter-call and call intervals, where n = 34): Calls consisting of a single note were emitted at regular intervals without defined call series. Calls had linear upward frequency modulation with a downward hooked tail, with an initial dominant frequency around 7000 Hz, rising gradually to ca. 8250 Hz, and with a tail-end dropping down to ca. 7500 Hz again. For detailed parameters, see Table 2 View Table 2 .

Cranium ( Fig 6 View Fig 6 D–6G). Shape and proportions. Skull short and rounded, longer than wide, widest at the bowing of the quadratojugal roughly in line with the anterior face of the prootic. Braincase proportionally broad, with an extremely short rostrum.

Neurocranium. Ossification generally high, lower in ZSM 862/2014 than other specimens. Anterior cone of sphenethmoid ossified and in contact with the frontoparietals in ZSM 861/ 2014 and ZMB 83194 View Materials and 81993, but no sphenethmoid ossification in the other specimens. Prootic in dorsal contact with lateral flange of frontoparietal, ventral contact with parasphenoid alae, not approaching contralateral ventrally. Septomaxilla miniscule, very tightly curled, not further discussed due to low ossification and insufficient resolution. Columella (stapes) well ossified, pars media plectra (stylus) long and nearly straight, broadening distally, posteriorly and dorsally oriented toward the dorsally elongated pars interna plectra (baseplate). Nasal narrow and cultriform, laterally displaced (in line with anterior end of frontoparietal), curved downward laterally, the acuminate maxillary process not distinct and not closely approaching maxillary pars facialis, broadly separated from contralateral. Frontoparietal with rounded anterior edge, laterally rather straight-edged, with short lateral flange covering prootic, posteriorly strongly connected to exoccipital, anteroventrally contacting sphenethmoid in ZSM 861/2014, lacking any dorsal process, separated from contralateral by a narrow gap with a small rhomboid facet at the level of the prootics, possibly constituting the pineal foramen.

Maxillary arcade gracile, maxilla and premaxilla edentate, anterior extension of maxilla not exceeding lateral extent of premaxilla. Premaxilla with a narrow acuminate dorsal alary process rising laterally, pars palatina shallowly divided into a narrow palatine process and broad, squared lateral process. Maxilla with a low triangular pars facialis and a narrow pars palatina, its posterior tip acuminate and barely contacting the quadratojugal, the lingual surface of the pars palatina followed by but not contacting the anterior ramus of the pterygoid, presumably separated by the pterygoid cartilage. Pterygoid with an exceptionally short medial ramus, long anterior ramus, and broad posterior ramus, posteriorly weakly calcified to the quadratojugal complex. Quadratojugal bowed laterally, broadly connected to the ventral ramus of the squamosal, bearing a small posteroventral knob, weakly anteriorly connected to the maxilla; the articulation of the mandible is apparently somewhat fortified by the mineralisation of the posterior ramus of the pterygoid+squamosal+quadratojugal posteroventral knob. Squamosal with a slender, rather straight ventral ramus, broadened, nearly vertical otic ramus, and short, thin, horizontal zygomatic ramus.

Mandible slim and edentate, largely unremarkable, with a weakly raised coronoid process on the angulosplenial. Mentomeckelians separated from the dentary, with small hooked ventrolateral projections.

Humerus with a well-developed crista ventralis and no medial or lateral cristae. Radioulna slender with a distinct sulcus intermedius. Carpals apparently reduced, composed of radiale, ulnare, element Y, prepollex, and a large post-axial element formed by carpals 3–5. Carpal 2 has either been lost or fused to the latter element. Finger phalangeal formula is reduced (1-2-3-2), and the terminal phalanges of the first, second and fourth fingers are small, round elements.

Pubis ossified; iliac shafts passing ventral to and beyond sacrum, oblong in cross-section, with a weak dorsal crest, without a dorsal prominence and with a shallow oblique groove. Femur weakly sigmoid, lacking a posterior crest. Tibiofibula slightly longer than femur in length, with a sulcus intermedius. Tibiale and fibulare fused proximally and distally. T1 and T2 +3 tarsals present, T1 considerably smaller than T2+3. Centrale present, slightly smaller than T2+3. Prehallux small. Phalangeal formula reduced (1-2-3-4-3). Terminal phalanges of toes 3 and 4 with knobs, those of other toes small, round elements.

Distribution, natural history, and conservation status. This species is known only from Manombo Special Reserve, southeast Madagascar ( Fig 3 View Fig 3 ). The habitat consists of low, comparatively open forest with small trees, many lianas and a very thick layer of dead leaves ( Fig 4J View Fig 4 ). Calls were emitted by males during the day, hiding within the leaf litter or between roots, separated from other calling males by several metres. The female paratype ZMB 83194 View Materials contains four eggs (visualised by micro-CT scan, not extracted for physical examination). Manombo Special Reserve covers an area of 52.66 km 2. We estimate that this species occurs from 0–100 m a.s.l. within lowland forests in and around this reserve. Although lowland species from areas with low topographical complexity tend not to be extreme micro-endemics [ 43], extremely miniaturized frogs in Madagascar almost always are [ 14, 17], so the full extent of this species’ range is not likely to be large. Littoral forest in the area where the species occurs is extremely reduced, so other sites outside the Special Reserve are likely to be small and under high pressure. We therefore recommend this species be listed as Critically Endangered according to the IUCN Red List Criterion CR B1ab(iii) [ 44], in line with other endemics from Manombo Special Reserve (e.g. Guibemantis   diphonus [ 45]).

Etymology. We use the specific epithet ‘mum’ as an arbitrary combination of letters, in order to form a pun on ‘minimum’ from the name in apposition, in reference to the fact that this is among the smallest known frogs from Madagascar and the world. It is to be regarded as an invariable noun. 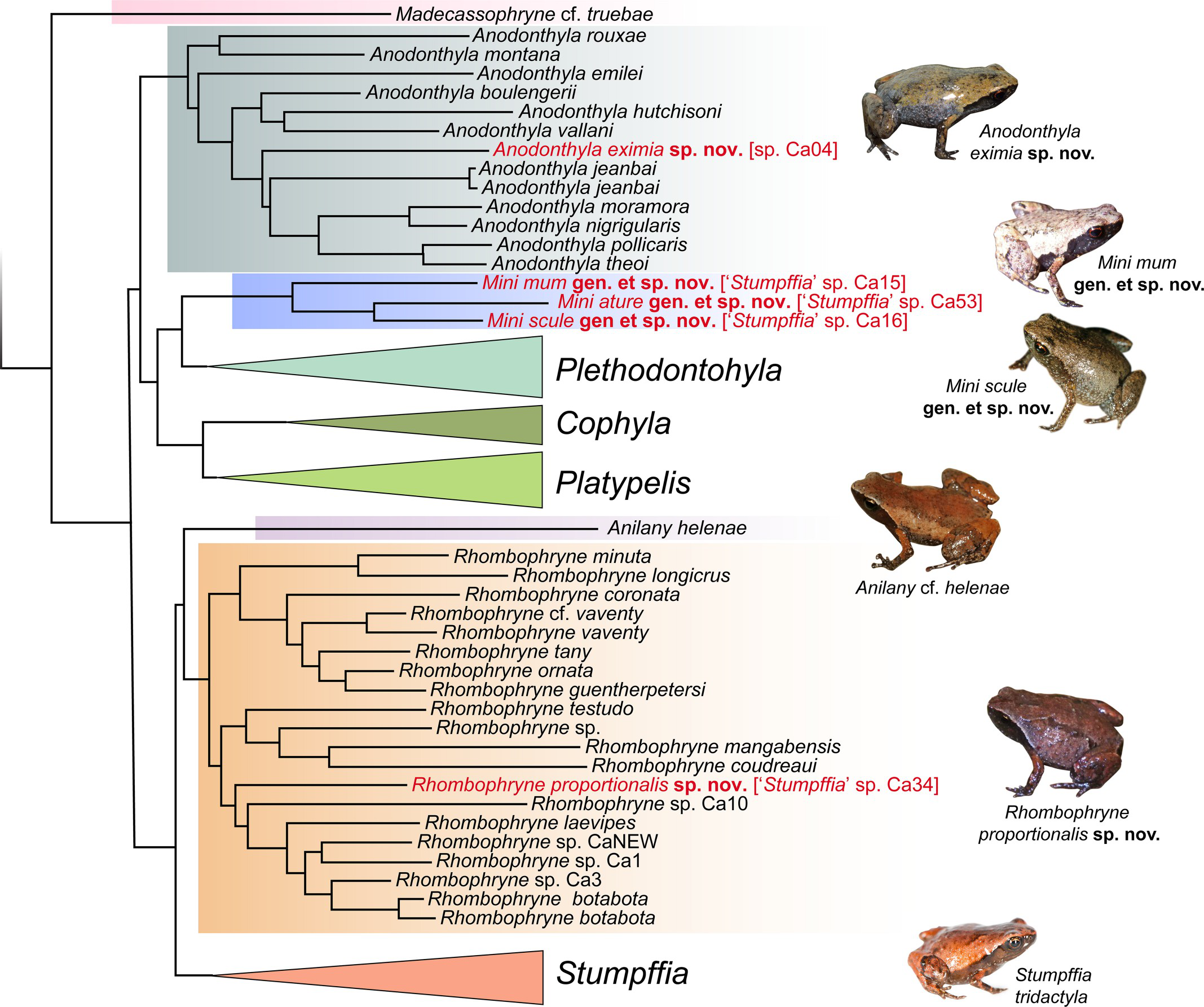 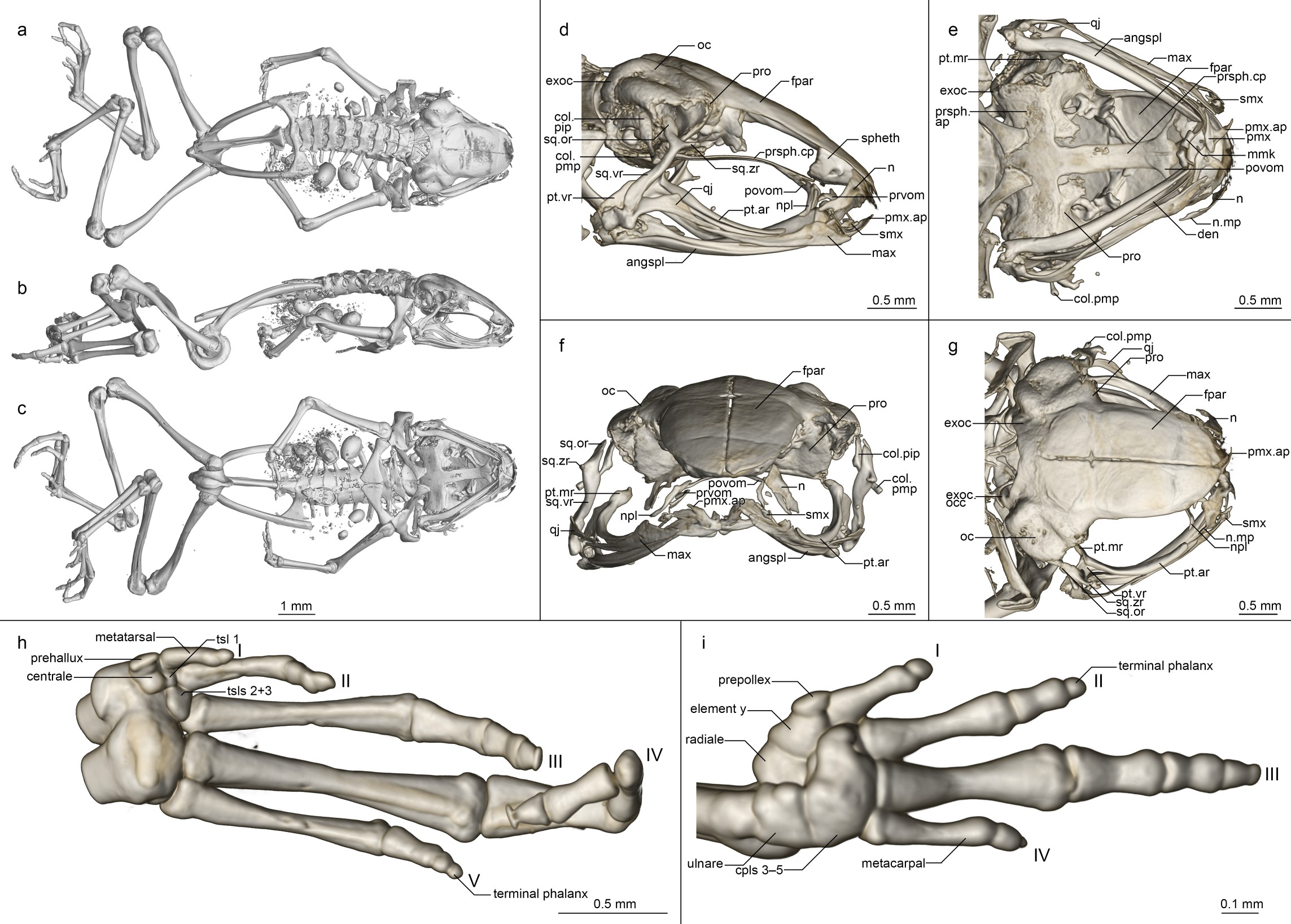