Diagnosis. Oxynoemacheilus sarus   is distinguished from sympatric O. seyhanicola   by possessing narrow, darkbrown bands on the caudal fin (vs. hyaline or with very indistinct brown pigmentation on rays), a black spot at the upper and a black blotch on the lower caudal-fin base (vs. absent, often with a very small black spot in front of the first unbranched caudal-fin rays at the upper and lower caudal-fin base, usually an indistinct central brown blotch or short bar on middle of caudal-fin base), and a series of midlateral blotches on the flank, individual blotches not or very rarely extending to middorsal saddles (vs. flank with bars extending to middorsal saddles and meeting contralaterals in many individuals, in some individuals a series of midlateral blotches, usually overlaid by bars).

Oxynoemacheilus sarus   is distinguished from O. evreni   , which is found in the lower Ceyhan, by possessing a deeper caudal peduncle (caudal-peduncle depth 1.5–1.8 times in its length vs. 1.8–2.4), a forked caudal fin in which the shortest middle caudal-fin ray is 56–70% of the longest ray in the upper caudal-fin lobe (vs. 80–91%), a black blotch or spot at the upper and lower caudal-fin base (vs. absent), and a midlateral series of irregularly shaped blotches along the flank, usually disconnected from the saddles on the back (vs. flank with irregularly shaped bars or vertically elongate blotches, especially on the caudal peduncle usually connected to the saddles on the back).

Coloration. Body with yellowish or pale brown background and dark-brown pattern in live and preserved individuals. Preserved individuals with a dark-grey, narrow inner-axial stripe especially prominent on flank behind dorsal-fin base, absent in life. Dorsal head and upper part of cheek with a vermiculate or marbled pattern, cheek without pattern in some individuals. Ventral surface of head yellowish without pattern. Flank with 7–12 dark-brown, irregularly shaped and set midlateral blotches, connected by inner axial stripe in preserved individuals. Blotches not or rarely extending to middorsal saddles. Midlateral blotches usually dissociated on predorsal part of flank. Back with 2 predorsal saddles, one saddle at dorsal-fin origin and one at posterior dorsal-fin base, a single individual with 3 predorsal saddles, and 2–4 saddles behind dorsal fin, all saddles wider than interspaces. No or few spots, vermiculation or mottling between blotches on back and flank above lateral midline. One dark-brown, often commashaped blotch at lower caudal-fin base usually reaching to middle of caudal-fin base, a second, much smaller blotch at uppermost caudal-fin base, both indistinct in some preserved individuals. Posteriormost upper and lowermost caudal peduncle without a distinct yellowish, unpigmented blotch. Dorsal and pectoral fins with many, small brown blotches on rays, forming 1–3 narrow bands. Caudal fin with many small brown blotches on rays, forming 3–6 very distinct bands. Dorsal, caudal and pectoral fin greyish. Anal and pelvic fins hyaline in life, yellowish in preserved individuals, with few dark-brown blotches on rays.

Distribution. Oxynoemacheilus sarus   was collected from the lower Ceyhan and Seyhan drainages in Turkey.

Etymology. The species is named for the Sarus, the Roman name of the Seyhan River. A noun in the genitive.

Oxynoemacheilus seyhanicola   was described by Erk’akan et al. (2007) based on a single individual ( Fig. 6 View FIGURE 6 ) from “Dam bridge near Adana, Seyhan basin, 38°39′N 36°37′E ”, where the type locality is exactly remains unclear. The coordinates in the original description are obviously incorrect, which are the same as for the holotypes of O. evreni   and O. ceyhanensis   , although the localities are different. Füsun Erk’akan told us that she does not well re- member the exact place, but likely the holotype was caught from the stream Eğlence near the Seyhan Dam in Adana (Füsun Erk’akan, pers. comm., 2021). Erk’akan et al. (2007:81) diagnose O. seyhanicola   (as Schistura seyhanicola   in the description, as Nanoschistura seyhanicolo in Figure 11 View FIGURE 11 ) by lacking scales, having an incomplete lateral line, a long and pointed snout, and a series of large, midlateral blotches ( Erk’akan et al. 2007). A series of other characters were named but the character states are not given. The caudal fin was already broken and lost in the holotype when it was examined and the colour pattern of the individual had faded; the remaining pattern still seen on the drawing of the type has been lost since.

Both species identified by Geiger et al. (2014) as O. seyhanicola   have scales on the flank and therefore, Freyhof & Geiger (2021) suggest, that a third species might be involved. Füsun Erk’akan and Filiz Özdemir (Ankara) made the holotype of O. seyhanicola   ( Fig. 6 View FIGURE 6 ) available. While it is clear that this is the individual on the drawing of the holotype published by Erk’akan et al. (2007), the description and the characters seen on the type do not fit together. Obviously, the scales have been overlooked by Erk’akan et al. (2007), as the flank of the type is covered by scales and the lateral line is complete terminating at the anterior part of the hypural complex.

Oxynoemacheilus sarus   is distinguished from O. shehabi   by possessing a midlateral series of large blotches, disconnected from the saddles on the back (vs. 5–7 bars, irregularly shaped and set, extending to the middorsal saddles and meeting the contralaterals), and the caudal peduncle is 1.5–1.8 times longer than deep (vs. 1.8–2.4).

The new species is distinguished from O. argyrogramma   and O. marunensis   by possessing a midlateral series of blotches on the flank without a mottling pattern above and/or below the blotches (vs. marbled or mottled colour pattern on the flank in O. argyrogramma   , mottled above and below the midlateral series of blotches in O. marunensis   ), no, or only a very short, incision in the upper lip (vs. a deep median incision in O. argyrogramma   ), and 9+8 branched caudal-fin rays (vs. 8+7 or 8+ 8 in O. marunensis   ). Oxynoemacheilus shehabi   is distinguished also from O. euphraticus   and O. kurdistanicus   by possessing no, or only a very shallow incision in the upper lip (vs. a deep median incision), and a midlateral series of blotches on the flank (vs. flank pattern irregularly mottled or marbled on flank in front of dorsal fin, with bars behind the dorsal-fin base). It is distinguished from O. hanae   by lacking isolated patches of dark-brown spots or blotches on the lower part of the flank (vs. present) and having two distinct black blotches at the caudal-fin base (vs. usually a chevron shaped bar at the caudal-fin base, dissociated into a large lower blotch and a small spot or into two, usually indistinct spots in few individuals, usually fused to the last midlateral blotch). The new species is distinguished from O. karunensis   and O. persa   by possessing a well-developed pelvic axillary lobe, fully attached to the body (vs. lobe absent or rudimentary, shallow and knob-shaped); the caudal peduncle is 1.5–1.8 times longer than deep (vs. 1.7–3.1 in O. karunensis   ). Oxynoemacheilus sarus   has a regular series of midlateral blotches (vs. a midlateral series of short bars or vertically elongated blotches in O. karunensis   ), and no or sparse spots, vermiculation or mottling between the blotches on the back and the flank above the lateral midline (vs. many minute dark-brown spots, with a mottled colour pattern between the saddles and large blotches in O. karunensis   ) 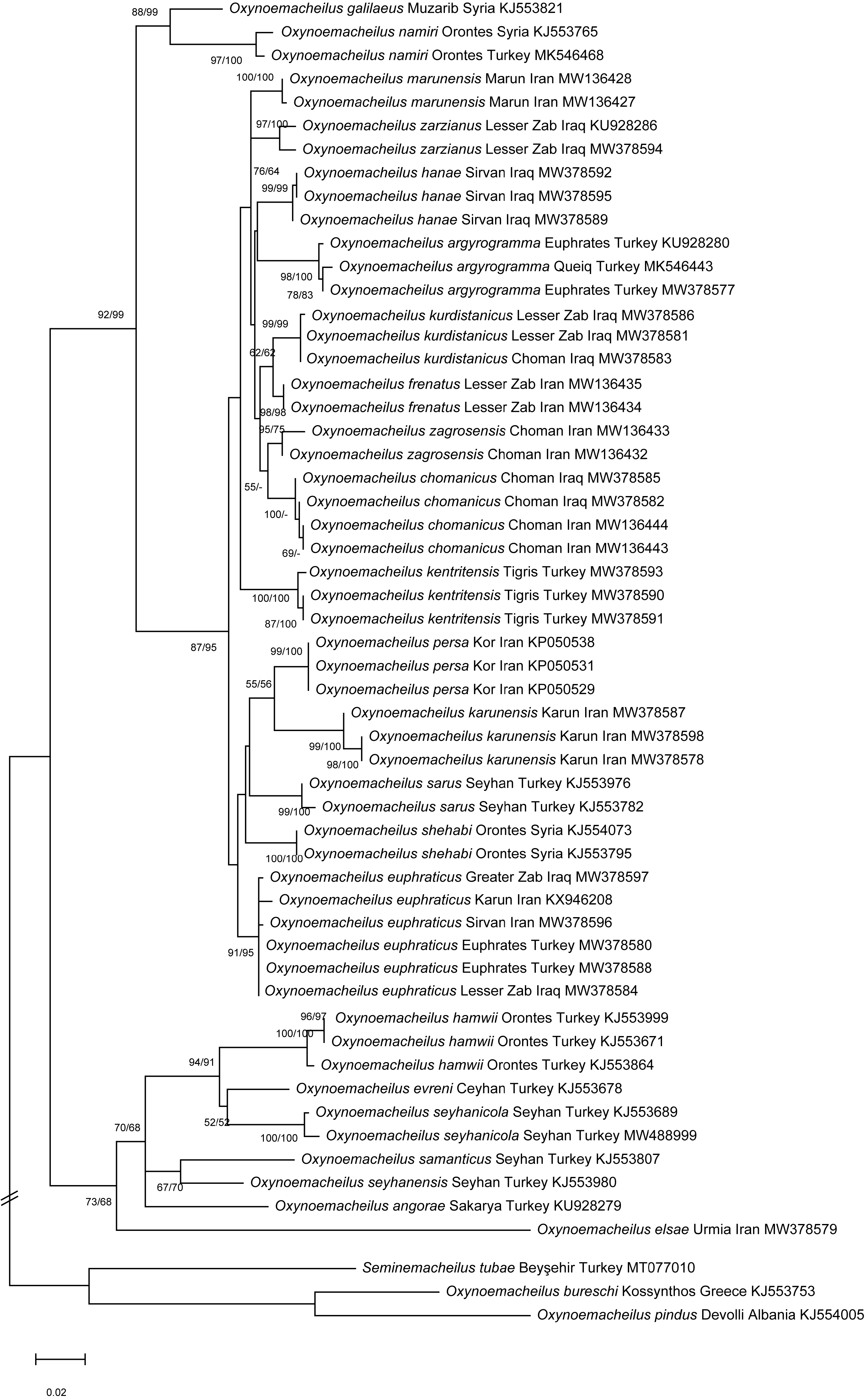 FIGURE 1. Maximum likelihood estimation of the phylogenetic relationships based on the mitochondrial DNA barcode region (GTR model, discrete Gamma distribution for rate differences with 5 categories (+G, parameter = 0.1612). Initial tree(s) for the heuristic search were obtained by applying the Neighbor-Joining method to a matrix of pairwise distances estimated using the Maximum Composite Likelihood (MCL) approach. Nucleotide positions with less than 98% site coverage were eliminated, resulting in 555 analysed positions each from 56 nucleotide sequences. Numbers of major nodes indicate bootstrap values from 500 pseudo-replicates from the ML and NJ method. The tree is drawn to scale with branch lengths depicting number of substitu- tions per site. 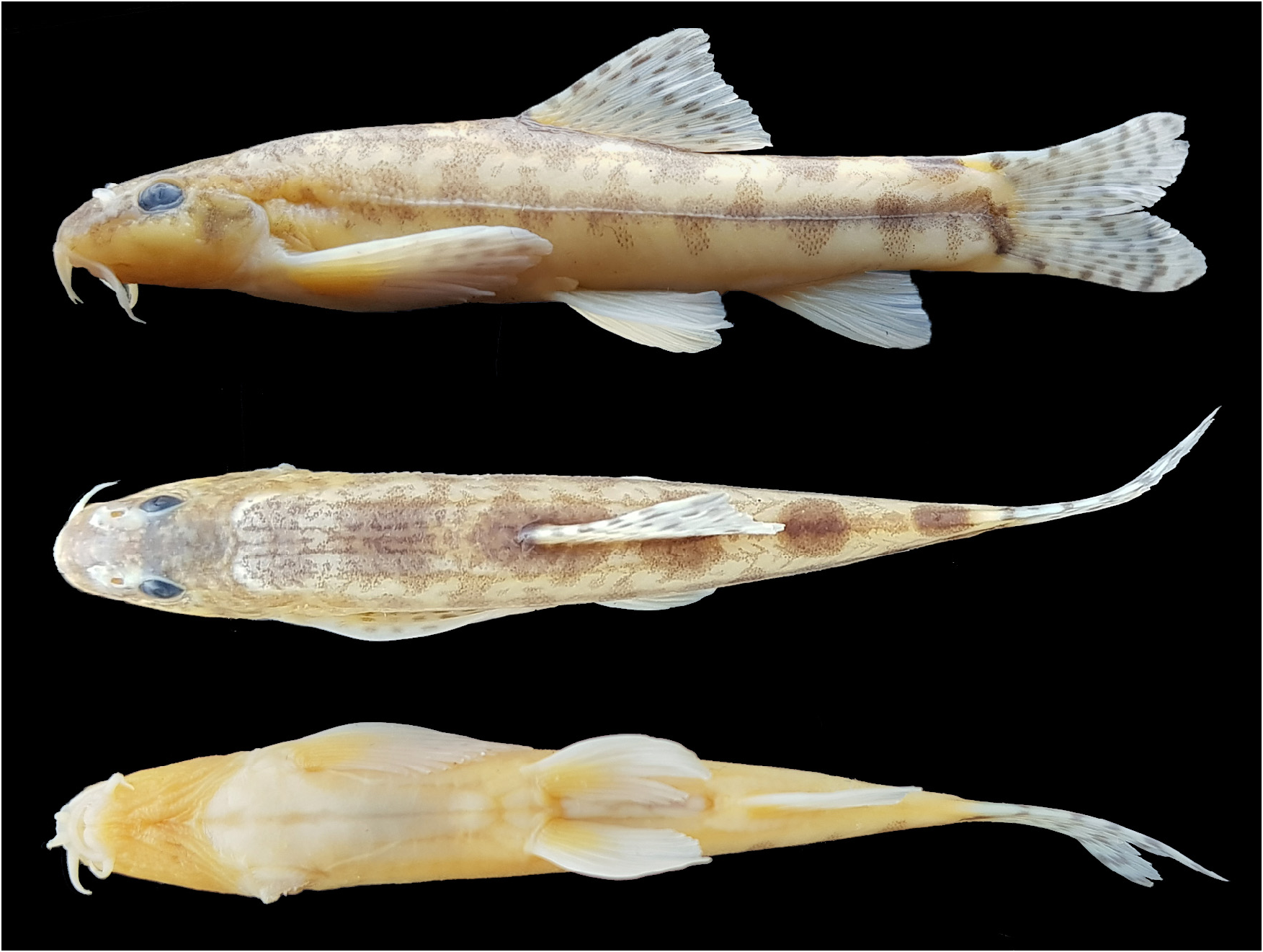 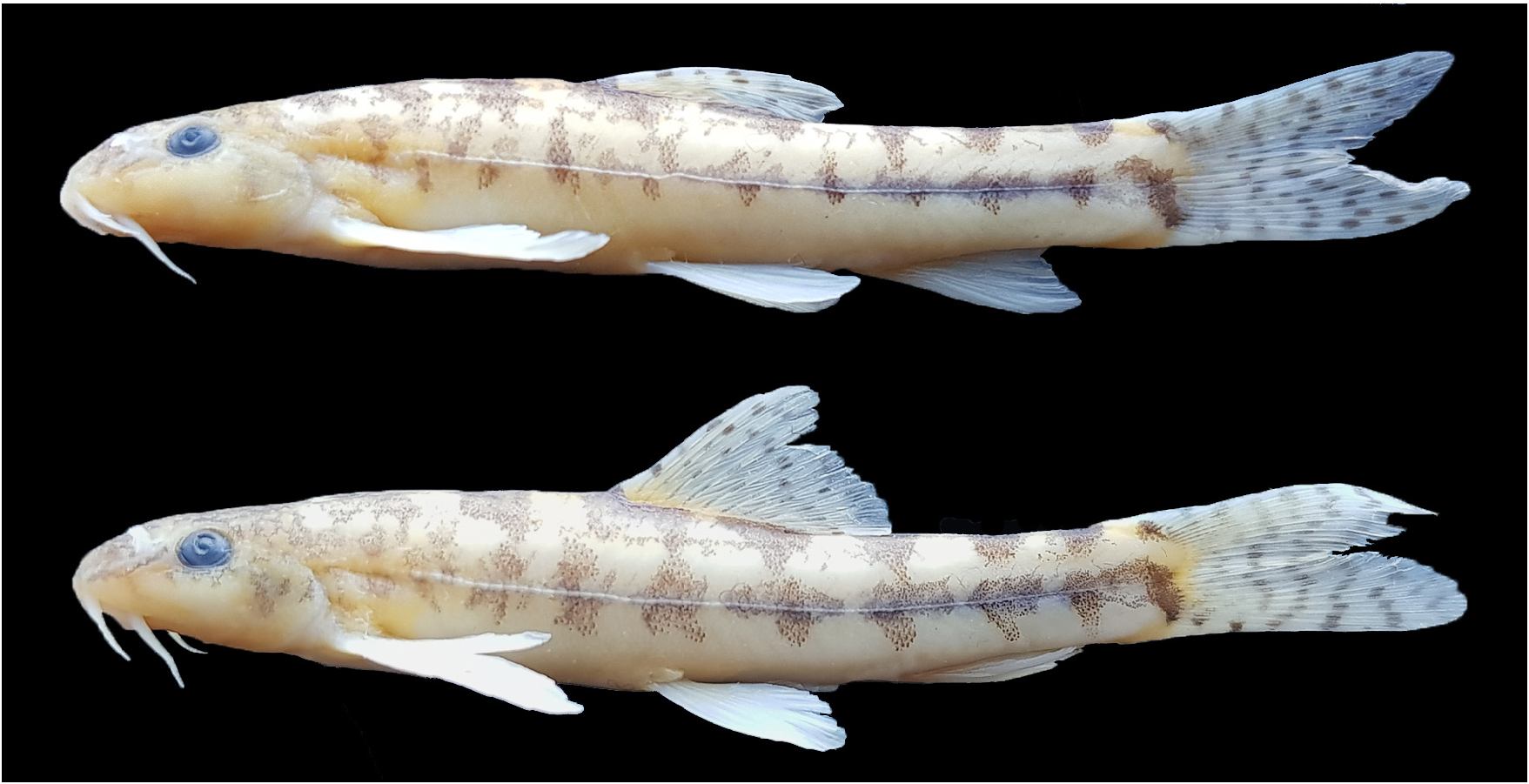 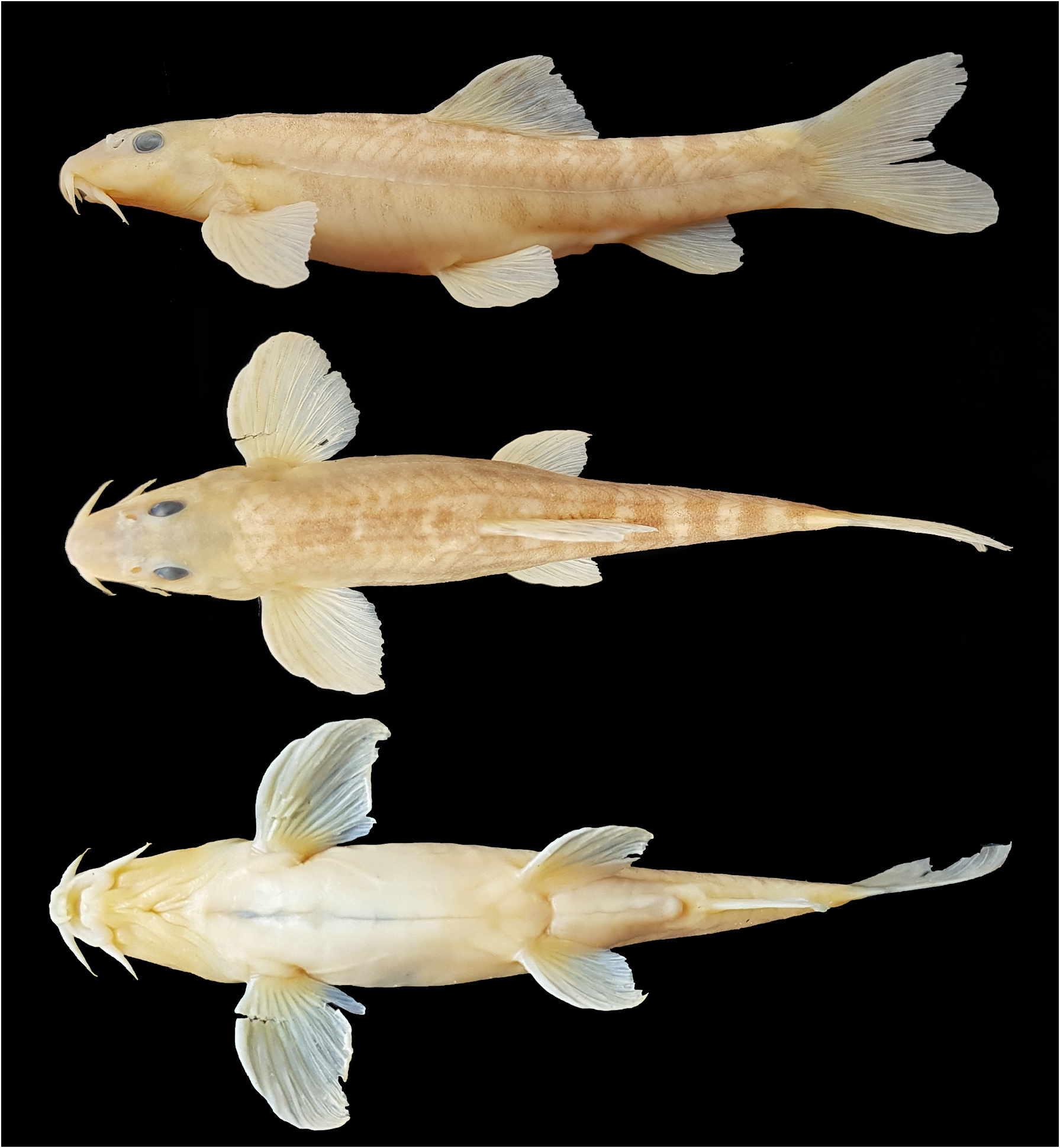 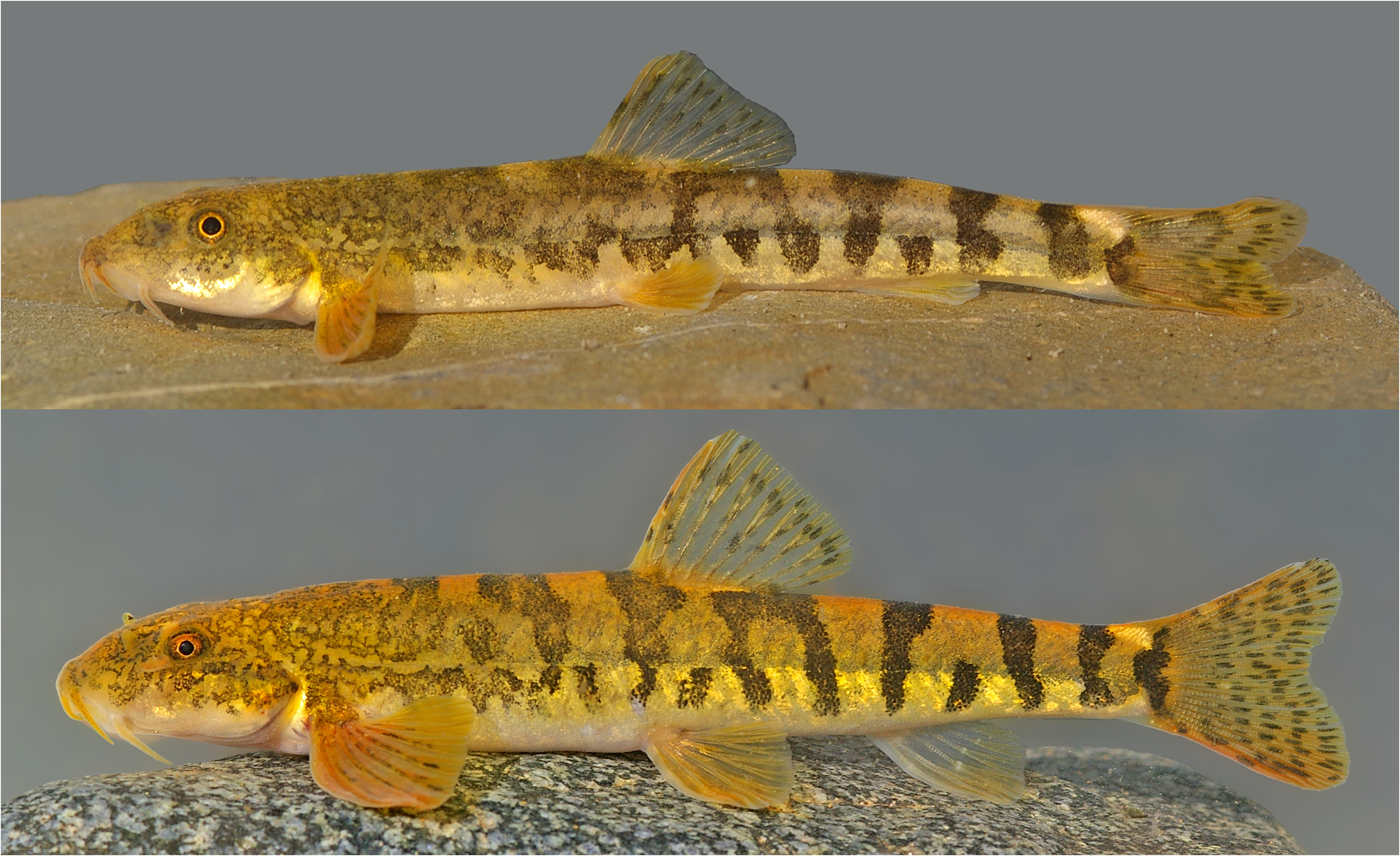