Diagnosis. See Garman (1913) and Compagno (1984 b, 1988) for a comprehensive diagnosis of Haploblepharus   . Haploblepharus   sharks are slender catsharks, with a long caudal peduncle and fin; distinguished from other southern African scyliorhinids by the expansion and fusion of the anterior nasal lobes into a flap that is united across the ventral midline, extends to the upper labium, and partially overlaps it in some cases, covering the excurrent nasal apertures; small separate symphyseal (basimandibular) cartilage present in lower jaw; sexual dimorphism not apparent. There is a high degree of morphological conservation between species within the genus. The sizes of Haploblepharus   species, by sex, and for different maturity stages are shown in Figure 2 View FIGURE 2 .

Common name. These sharks are normally referred to in the literature as shysharks (Afrikaans – skaamoog), due to their behaviour of covering their eyes with their tails when threatened, however this behaviour is common to Haploblepharus   and Poroderma   . Furthermore, the general public, including the angling and SCUBA diving communities, often refer to these sharks as doughnuts, again because of their behaviour when threatened. The term shyshark is used for all members of this genus and the term doughnut is used for both Haploblepharus   and Poroderma   in southern Africa (pers. obs.). Such common names have confounded catch data from both commercial and recreational fishermen, particularly among the latter. In an effort to give the members of this genus common names that will be easily remembered by the general public, Compagno & Human (2003) introduced the name happy sharks, an allusion to their generic name.

Remarks. The fusion of the anterior nasal flaps in Haploblepharus   is unique to southern African scyliorhinids (not all scyliorhinids as stated by Bass et al., 1975). Elsewhere within the Scyliorhinidae   , it occurs in the genera Atelomycterus Garman, 1913   (Indo-West Pacific), and Scyliorhinus   [in S. canicula (Linnaeus, 1758)   , Europe and Atlantic north Africa; S. comoroenis Compagno, 1988   , tropical west Indian Ocean; and S. garmani (Fowler, 1934)   , Indo-West Pacific]. Other sharks in southern African waters that have fused anterior nasal flaps are Scylliogaleus quecketti Boulenger, 1902   ( Triakidae   ), and Stegostoma fasciatum (Hermann, 1783)   ( Stegostomatidae   ) ( Compagno, 1984 b, 1988, 2001; Compagno et al., 1989, 2005). Smith (1837) placed H. edwardsii   in the genus Catulus   (attributed to Willoughby by Smith, 1837) along with Atelomycterus marmoratus (Bennett, 1830)   and Scyliorhinus canicula (Linnaeus, 1758)   , and may have based this grouping on the fused anterior nasal flaps. Garman (1913) described Haploblepharus   as lacking posterior nasal valves, this is incorrect, as the excurrent nasal apertures are hidden by the fused anterior nasal flap and are obvious once this is lifted.

The presence of a small cartilage at the symphysis of the lower jaw (basimandibular) was first described and figured by Bass et al. (1975) and they suggest that the extra cartilage strengthens the jaw at the symphysis with the compromise of reduced jaw mobility. The presence of the basimandibular is an autapomorphic character of Haploblepharus   ( Compagno, 1988; Human et al., 2006).

The juveniles of most of the Haploblepharus   species are elusive, with poor representation in collections. The author speculates that this could be due to a period of rapid growth from time of hatching to late adolescence. If juveniles are collected, it should be considered a priority to collect a genetic sample before preserving the specimen, as there is still considerable confusion as to the identity of some juvenile Haploblepharus   specimens. The collection of genetic material may also shed light on the ontogenetic segregation apparent in some species (see Distribution, below). Genetic samples are also needed for adult H. kistnasamyi   . A genetic study of this genus at the species and population level is needed to resolve these issues.

As determined by the current study, Haploblepharus   contains four valid taxa. These are H. edwardsii (Schinz, 1822)   , H. pictus ( Müller & Henle, 1838)   , H. fuscus Smith, 1950   , and H. kistnasamyi Human & Compagno, 2006   . Due to the tentative placement of some juvenile specimens in nearly all of the species groups, the species identification key (below) is based on type material and mature specimens (maturity stage 4 or 5).

Etymology. Although not specified by Garman (1913), it is assumed that Haploblepharus   is derived from the Greek words haplos, meaning single or simple, and blepharon, meaning eyelid, and refers to the simple structure of the lower eyelid that can close against the upper eyelid to protect the eye.

Distribution. Haploblepharus   species are rare to abundant, and are present in southern Namibia and South Africa. They also demonstrate habitat preferences, and H. edwardsii   apparently exploits different niches either side of Cape Agulhas, by occurring at different depths, possibly to avoid competition with other Haploblepharus   in the Eastern Cape.

Haploblepharus edwardsii   is abundant close inshore in the Western Cape, certainly west of Cape Agulhas, whereas it appears to prefer deeper water east of Cape Agulhas (see species account below). Smith (1950) commented that he had not known H. edwardsii   to be caught from the shore (in reference to the Eastern Cape), whereas they are easily observed when diving from the shore in the Western Cape (pers. obs.). The deeper habit of H. edwardsii   in the Eastern Cape has also been noted by Bass et al. (1975), and Compagno (1984 b, 1988). This may serve to avoid competition with H. fuscus   and H. pictus   in that area ( Compagno 1984 b, 1988; current study), however, H. edwardsii   is not unknown to occur in inshore waters of the Eastern Cape (Buxton et al., 1984; Wallace et al., 1984; current study). The deepest record for H. edwardsii   verified here is 111 m, and Bass et al. (1975) record this species from 130 m. Haploblepharus edwardsii   is apparently segregated by depth from H. fuscus   and H. pictus   in Eastern Cape waters, with H. fuscus   and H. pictus   occurring at shallower depths than H. edwardsii   , which may serve to reduce the amount of competition between the species there ( Compagno, 1984 b, 1988; current study).

An interesting phenomenon that was brought out in the current study was the difficulty encountered in collecting juvenile and adolescent H. edwardsii   females from False Bay and Table Bay (also noted by Dainty, 2002; A. Bertolini, pers. comm.). Dainty (2002) had noted the difficulty in obtaining any female specimens. Sex ratios, particularly of juveniles and adolescents, are highly biased towards males, therefore it appears that mature females come to False Bay and Table Bay from elsewhere, this requires further investigation.

The juveniles of H. fuscus   are scarce ( Bass et al., 1975; M. J. Smale, pers. comm.; current study), and there appears to be an unknown habitat that is used by H. fuscus   for egg laying and where juveniles spend that stage of their life history. 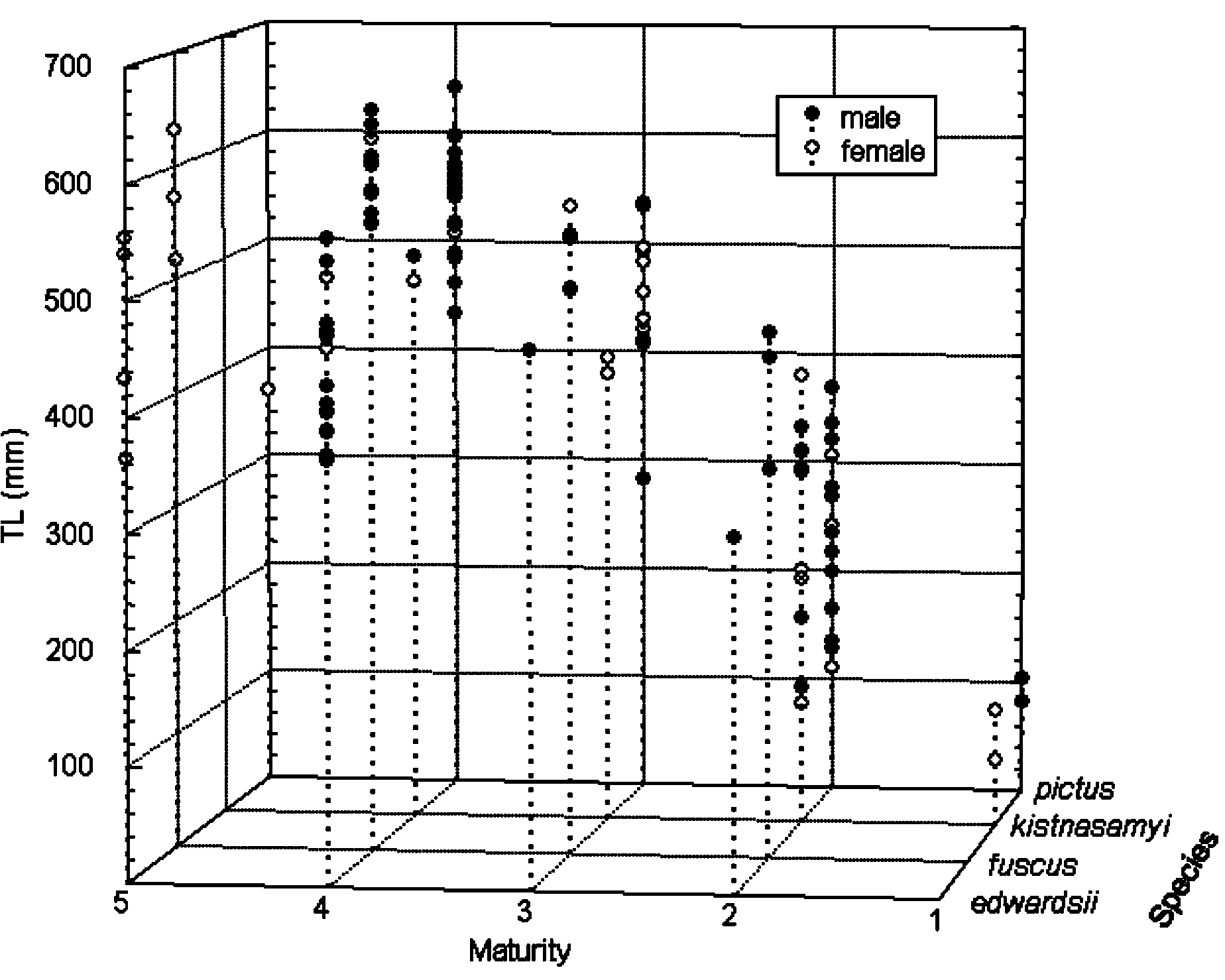 FIGURE 2. Total length at different stages of maturity for the species of Haploblepharus, for both sexes.