Head: Antennae short with scape large and robust, slightly flattened, longer than the next four antennomeres together, pedicel subequal to the following three antennomeres together, sixth antennomere long and oval, subequal to the previous four together, almost completely covering the first article of antennal club. Maxillary palpi long and robust, with four palpomeres with lengths: (0.5, 2.5, 2.1, 1.9 mm); first palpomere small and globose, second robust, markedly curved and broadened towards apex, third globose, about 2.1× longer than wide, wider at basal third, with a deep and broad ventral excavation from base to apex, fourth short, slender, subcylindrical, slightly curved and with truncated apex. Mentum hexagonal elongate, 1.5× wider at base than long, lateral margins parallel, anterior margin rounded. Labial palpi short, length of palpomeres: 0.2, 1.8, 1.1 mm mm; first palpomere very small and broad, second long, inflated, sub-triangular and widening apically, 1.6× longer than the third, with a tuft of long golden setae near the outer margin, third palpomere shorter, comparatively narrow with truncate apex ( Fig. 29 View FIGURES 25–36 ). Thorax: Prosternal lobes raised with apex with acute tooth directed ventrally, with short reddish-yellow setae near apex; mesoventrite with broad keel, with lateral margins slightly rounded and rather parallel towards apex, with a long and shallow oval concavity in the basal 3/5, deeper towards the apex. Metaventrite with keel wide and slightly convex, with feeble median longitudinal groove, ending as a long spine reaching half-length of the third abdominal ventrite ( Fig. 22 View FIGURES 19–24 ). Each elytron with two well-marked rows of black spots, one sublateral starting after the humerus, and other more incomplete on the sides ( Fig. 21 View FIGURES 19–24 ).

Taxonomical comments. This species was described by Sharp (1887: 762), based on a very small number of specimens and diagnostic characters. Unfortunately, there are no recent specimens known, and our redescription is based only on the type material of H. (D.) pollens Sharp , deposited in the Natural History Museum of London (BMNH). This species and H. (D.) cf. purpurascens appear to be the only species in Mexico and Central America belonging to the group of species with the third maxillary palpomere inflated and a strong ventral concavity ( Figs. 29, 33 View FIGURES 25–36 ). A female syntype has been previously labelled as the holotype apparently based on a misidentification of the sex of the specimen ( Fig. 45 View FIGURES 44–49 ). Nevertheless, in the original description Sharp (1887) did not mention any specimen in particular as being the holotype. Additionally, this female syntype bears a lectotype label by Andrew E.Z. Short ( Fig. 45 View FIGURES 44–49 ). This lectotype designation was, however, unpublished. Here we designate the male syntype as the lectotype in order to fix the identity of the species ( Fig. 44 View FIGURES 44–49 ). A specimen from Demerara, Guyana was part of the original series studied by Sharp. Since it is a female its identity cannot be confirmed beyond a doubt as well as its relation to the Mexican specimens. Nevertheless, its identity preliminary remains as originally intended by Sharp. Other species from South America are probably close to H. (D.) pollens . On his treatment of Venezuelan Hydrophilus Bachmann (1969) illustrated the genitalia of H. (D.) purpurascens Régimbart and the figure suggest a very close resemblance to H. (D.) pollens . However, Bachmann (1969) did not study the type specimens of any of the species treated therein. Type series of H. (D.) purpurascens , held in MNHN, is composed of females or specimens with broken appendages, and its genitalia has not been studied (Andrew E.Z. Short personal communication). Similarly, the study of the types of H. (D.) palpalis viridis (Régimbart) (MNHN) suggest a strong external resemblance with H. (D.) pollens but its male genitalia have not yet been studied or illustrated (Andrew E.Z. Short personal communication). The nature of the relationship between these species remains to be solved through a detailed study of type specimens of South American species. 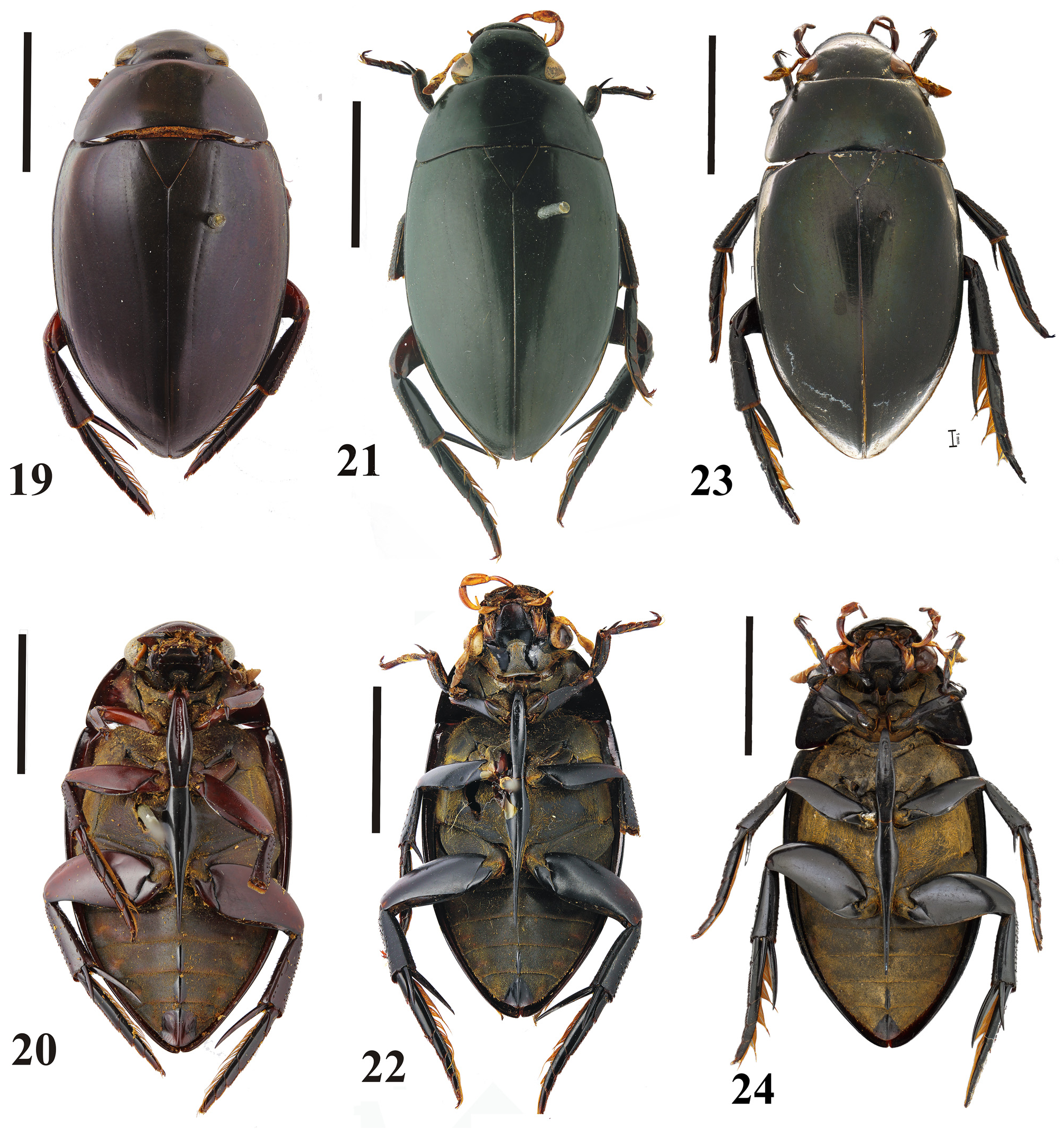 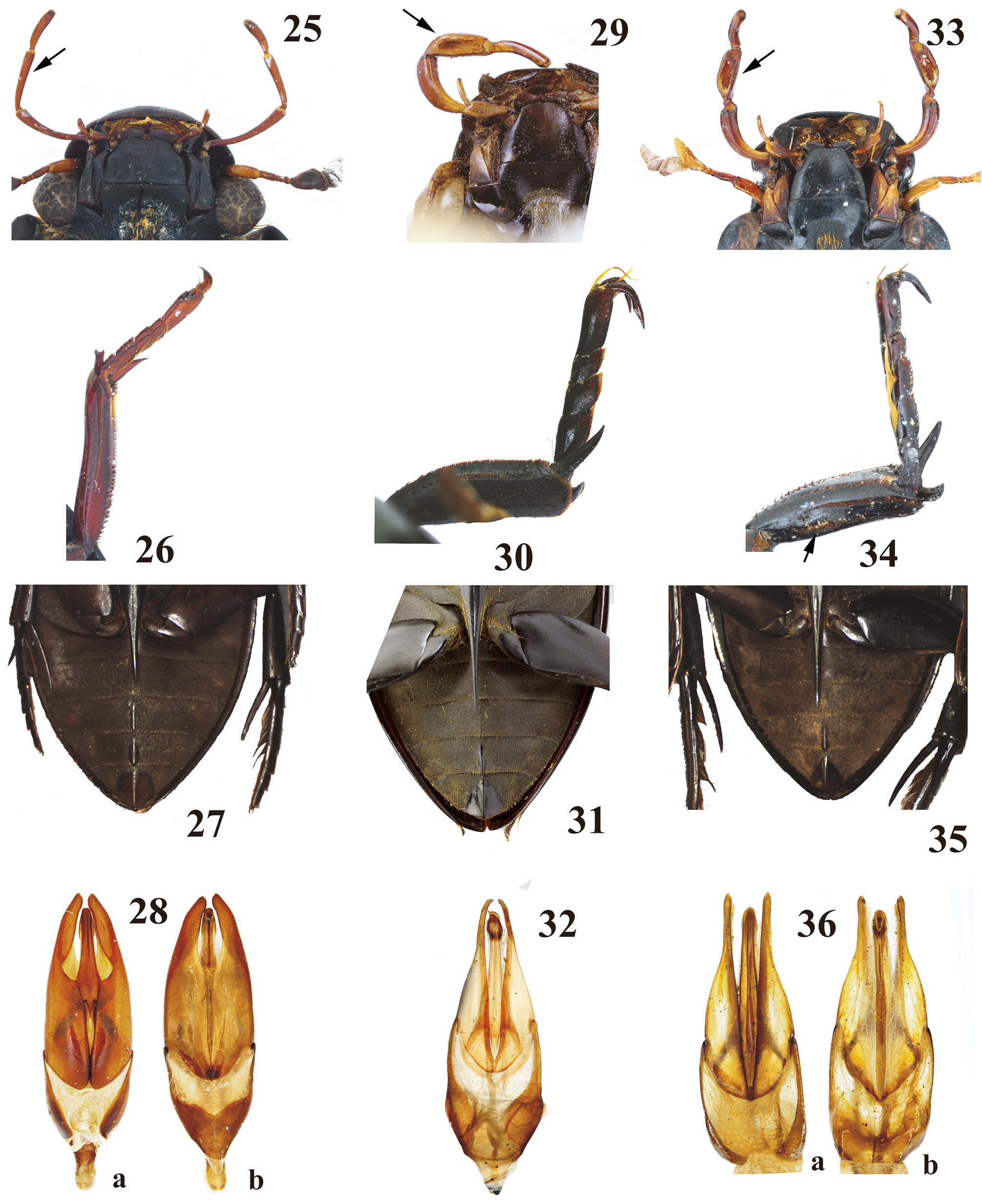 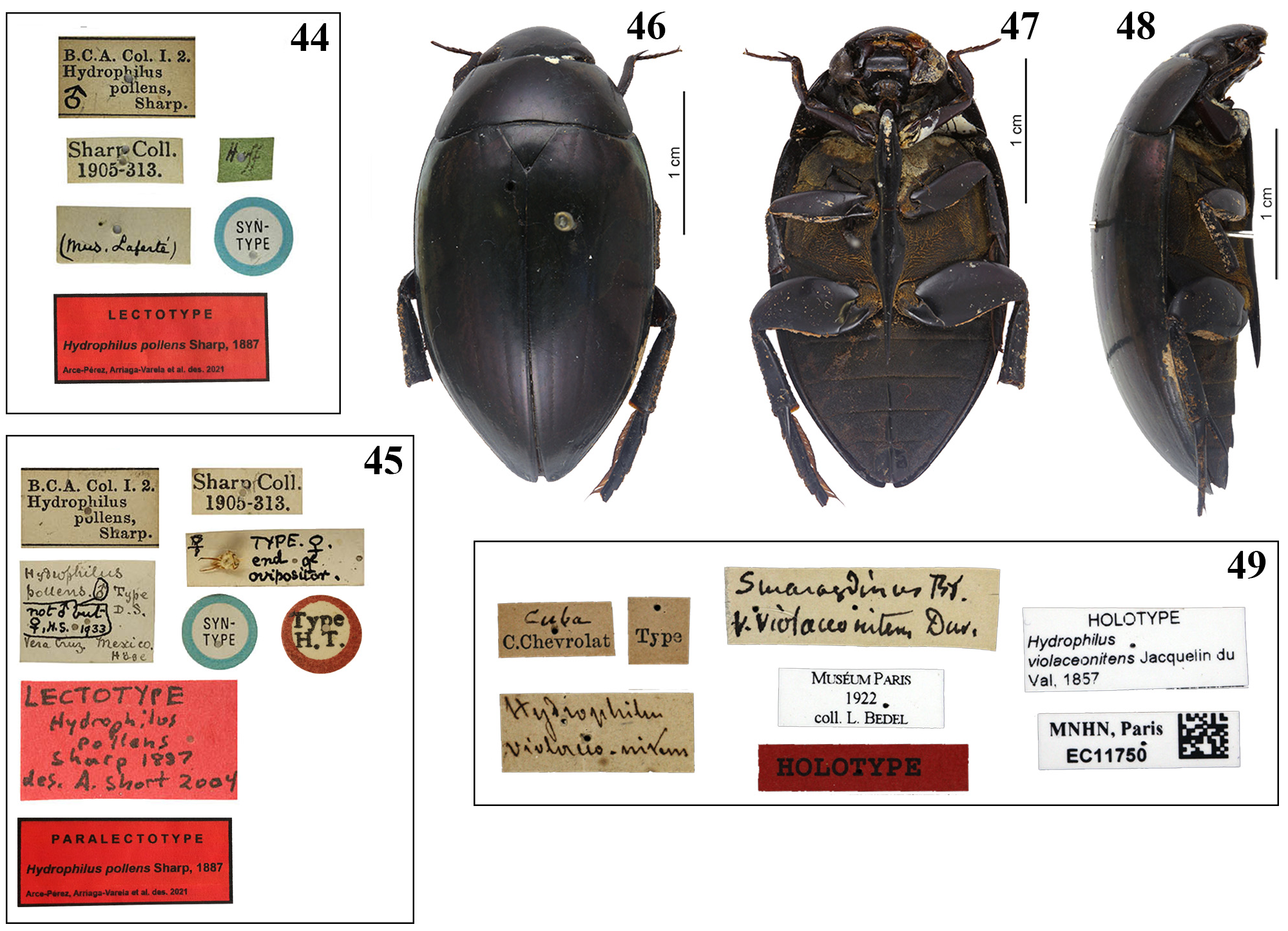