Redescription. Worker. HW 0.78–0.88, HL 0.76–0.82, SL 0.46–0.52, SLL 0.06–0.11, PrnW 0.46–0.51, WL 0.85–0.96, PetW 0.19–0.21, PpetW 0.44–0.5, GW 0.615–0.71, G1L 0.68–0.77, CI 102–107, SLI 13–21 (n=5). Head. Labrum longer than broad, with a pair of elongate, round-tipped lobes which are dorsally flexed and fringed with flat setae, their apical setae being conspicuously longer than the remaining; laterally having a pair of anteriorly turned teeth. Palpal formula 1,1. Mandible triangular; dorsum convex, with mild sculpturing; masticatory margin with 10 teeth in the outer row and 3 on the inner row (see figure 1 of Longino, 2013 for a detailed description of these specialized teeth); teeth 2, 7 and 10 (apical) of the outer row slightly longer and sharper than the remaining; inner teeth originating at the same level of teeth 3–6 of the main row; most or all teeth of the outer row with minute, serial V-shaped grooves along their individual height; dorsal surface covered on ground pilosity similar to that of head, denser basolaterally, apically the ground pilosity is thinner and sparser; inner surface concave, smooth on the blade area and reticulate basally; carina between lateral and inner surfaces long and having a simple long seta basally. Anterior clypeal margin concave medially; dorsum of clypeus with rough and opaque sculpturing; epistomal sulcus a deep groove which makes the clypeus surface and the frontal lobes convex. Anterior third of frontovertex with similar sculpturing to that of clypeus; in the remaining frontovertexal area, sculpturing is punctate with superimposed rugulae; longitudinal medial carina mild. Posteriormost surface of vertex (not seen in full face view, best seen in posterior view of the head) punctate only; occipital carina not entire, marked only dorsomedially, barely visible in full-face view. Scape with strongly developed basal lobe, margin apical to the lobe roughly straight; dorsal surface punctate; ground pilosity of small spatulate to spoon-shaped small setae, one row of slightly larger setae projects across the anterior edge. Scrobe deep, sharply delimited, its inner surface mostly smooth with a few rugulae. Antenna socket deep, reticulate, interrupting anterior section of dorsal margin of the scrobe. In lateral view, the lateral clypeal margin is seen as a carina that is adjacent to the ventral portion of the antennal socket margin and fades at about the middle of the scrobe surface, anterior to the eye level. Compound eye small, with 6–11 ommatidia. In full-face view, lateral margin of head posterad the eye with two sharp angles, a lateral vertexal angle and a posterior vertexal angle, which form a quadrate vertexal protruded corner; posterior vertexal margin between the vertexal corners concave. Ventral surface of head punctate with superimposed rugulae, covered on ground pilosity of similar size and type to that of scape and having a few long, simple suberect setae posteromedially. Mesosoma. In profile, dorsal margin mildly convex, with promesonotum and propodeum confluent, the metanotal groove only poorly marked in this view. Propodeal spines well-developed, posteriorly and slightly ventrally inclined; lamella below spine about 4x thinner than width of base of spine; lamella ends at the propodeal lobe on the lower propodeal descending margin. Metapleural gland bulla and propodeal spiracle raised from pleural surface, mildly translucid. Pleura punctate on the lateral pronotal, upper mesopleuron and propodeal lateral surface; opaque but without conspicuous sculpturing on lower mesopleuron and metapleuron, except by sparse punctation on their lowermost portions. Dorsum of mesosoma punctate with superimposed rugulae, punctation more conspicuous on the dorsum of the propodeum than on promesonotum where it is almost entirely obscured by rugulae. Descending propodeal surface reticulate. Lower mesopleuron obliquely divided by a carina which separates an elevated lower portion from an upper portion which is contiguous with the rest of the pleural surface. Ground pilosity on mesosoma restricted to dorsum of promesonotum, where it is thinner than that of head, and around the anterolateral margin of the pronotal disc, where it as developed as that on head. Legs densely covered with ground pilosity which gradually increase in size from femur to basitarsus, apex of each tibia on the outer surface with one considerably larger seta. Metasoma. Dorsum of petiole node slightly broader than long, dorsum of postpetiole about twice as wide as long. In profile, petiole with a mildly concave sternal region; subpetiolar process anteroventrally inclined, fingerlike, often entirely hidden by propodeal lobe. Petiole flanked laterally by two pairs of carinae, one marking the peduncle dorsolateral corners and the other crossing the entire length of the petiole ventrad the first pair. In lateral view, node taller anteriorly, delimited by carina only posteriorly. In dorsal view, postpetiole crescent-shaped, with a pair of posterior mediolateral tumuli; sternal region with a pair of stiff setae anterolaterally. First gaster segment transversely delimited by carinae anteriorly (anterior margins of tergite IV and sternite IV, respectively). Sternite IV longitudinally mildly keeled medially. Metasoma overall punctate; surface in between punctae on the dorsum of postpetiole and gaster considerably shiny, contrasting with the petiole which is more opaque in overall appearance as punctation is denser, with little space between punctae. Specialized, large, pompon-like setae on body as follows: full complement of 9 pairs on vertex; 4 pairs on the promesonotum (a pair anteromedially and a pair posterolaterally on the assumed pronotal area and a pair anterolaterally and a pair posterolaterally on the assumed mesonotal area); petiole with one pair flanking the posterolateral edges of the node; postpetiole with a pair posterolaterally and another pair mesad to that, on the apex of the postpetiole tumuli; first gaster tergite with a medial row of 4 pairs, flanked laterally by another pair just posterad the third of the medial line and another pair even more laterally positioned, at the level of the fourth medial pair. Tergites V, VI, and sternites IV, V and VI also with relatively large specialized setae. Coloration. Overall uniform reddish brown, with antennae and legs only slightly lighter. Lectotype and paralectotypes are plain brown and not as reddish as the series of recent collected specimens.

Queen description. Similar to worker in most traits, except that it is considerably larger; ocelli present, compound eyes much larger than in worker. Mesosoma with the typical modifications seen in queens. Mesoscutum large, punctate with superimposed rugulo-striation; transcutal line thin, well-marked; parapsidal lines inconspicuous; scutellum trapezoidal, punctate with some irregular striae. Mesopleural sulcus deep, oblique, sulcus with transversal small carinae across its length. Mesopleuron entirely separated from metapleuron by thinly sulcate mesometapleural suture; upper and lower metapleura and propodeum separated by broad sulci, poorly marked between lower metapleuron and propodeum. Lateral pronotum punctate; smooth areas on upper anterior section of lower mesopleuron and lower anterior section of upper mesopleuron; metapleuron opaque with sparse punctation. Standing setae on head, petiole and postpetiole as in workers; on mesothorax, various paired setae; on first gaster tergite, a total of 8 pairs (instead of the 6 pairs as in the workers), 4 pairs on the medial rows, a row of 3 pairs laterad the medial row, and one pair close to the posterolateral edge of the sclerite.

Comments. Characters justifying the separation of E. gravis from E. reichenspergeri were provided above and are illustrated ( Table 1 View TABLE 1 , Figs. 1 View FIGURE 1 and 2 View FIGURE 2 , E. xibalba also included for comparison). The lectotype of E. reichenspergeri ( Fig. 9 View FIGURE 9 ) from the state of Santa Catarina, Brazil, is not in optimal preservation, but the diagnostic characters are evident and it could be matched satisfactorily with the workers from Minas Gerais.

An uncommon state for E. gravis was observed in one specimen ( Fig. 1 View FIGURE 1 , D, red circle). It has an additional mesosomal standing seta that was considered an exception and not representing the common state for the species. The seta is too close to the posterolateral promesonotal seta; usually when Eurhopalothrix species have two pairs of setae on the posterior half of promesonotum (the corresponding mesonotal area), the anterior pair is located more anteriorly than what was observed in that specimen. The presence of this anomalous seta shows the importance of determining not only the number of pairs, but their exact position of origin on the sclerite surface. FIGURE 1. Comparison of head in full-face view (A–C) and dorsal view of the body (D–F) of workers of Eurhopalothrix species. A and D, E. gravis (CASENT0107554, images by April Nobile); B and E, E. reichenspergeri (B is UFV-LABECOL- 000725 and E is UFV-LABECOL-010765); C and F, E. xibalba, (INB0003665110, images by Brendon Boudinot). Scale bars from A to C are 0.2 mm and from D to F 0.5 mm. Specimen in B has one missing seta (left side of face, in the middle row), a common condition found in most dry specimens. Posterior vertexal corners are indicated by white arrow heads and anterior vertexal corners by black ones (size of the margin between them and their angles varying). Specialized setae are circled in white, specimen in D has one additional unpaired setae, circled in red, not observed in any other specimen studied (see comments under E. reichenspergeri redescription).

FIGURE 1. Comparison of head in full-face view (A–C) and dorsal view of the body (D–F) of workers of Eurhopalothrix species. A and D, E. gravis (CASENT0107554, images by April Nobile); B and E, E. reichenspergeri (B is UFV-LABECOL- 000725 and E is UFV-LABECOL-010765); C and F, E. xibalba, (INB0003665110, images by Brendon Boudinot). Scale bars from A to C are 0.2 mm and from D to F 0.5 mm. Specimen in B has one missing seta (left side of face, in the middle row), a common condition found in most dry specimens. Posterior vertexal corners are indicated by white arrow heads and anterior vertexal corners by black ones (size of the margin between them and their angles varying). Specialized setae are circled in white, specimen in D has one additional unpaired setae, circled in red, not observed in any other specimen studied (see comments under E. reichenspergeri redescription). FIGURE 8. Eurhopalothrix species occurring in southern South America. E. pilulifera has a larger distribution, reaching Central America, which is not shown (see Longino, 2013 for that species and the remaining Neotropical Eurhopalothrix). 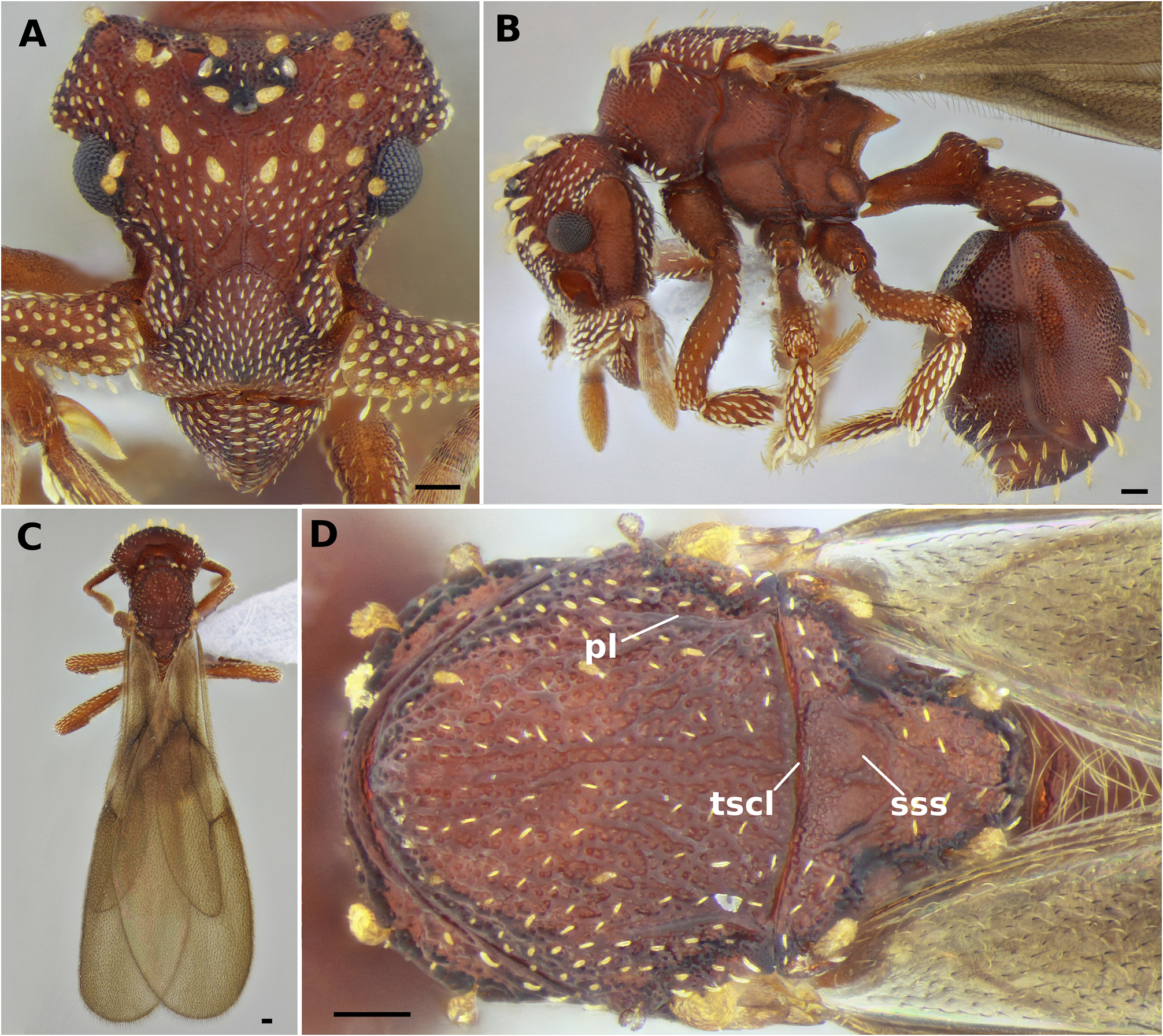 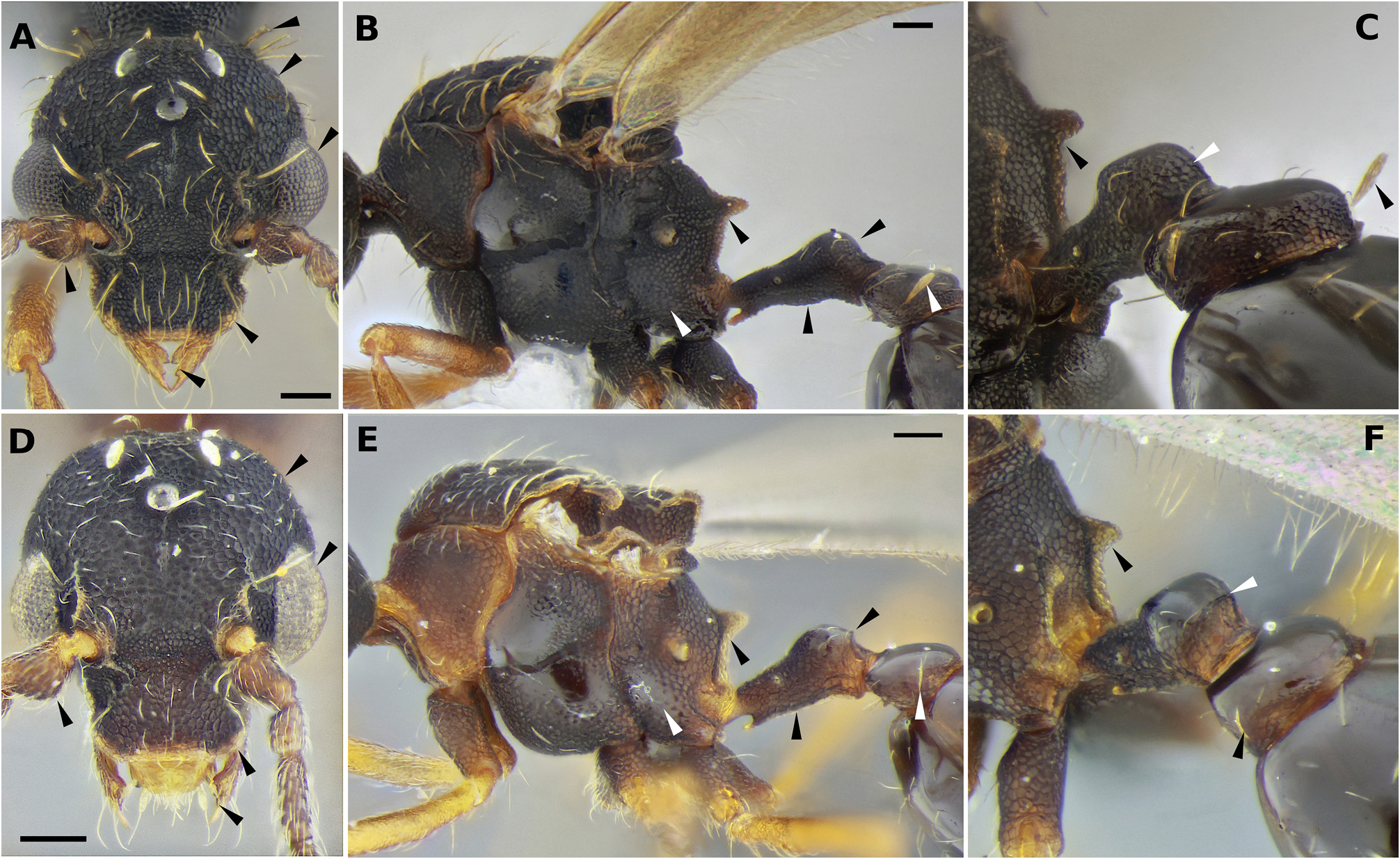