Unusual and unique among Gravesia Naudin   of Madagascar and Africa in having a dwarf rosette-like habit, semi-succulent obovate to oblanceolate 1-nerved leaf blades with entire margins that are distally repand, indumentum of minute (up to 0.1 mm long) gland-like trichomes that are rounded to shallowly bilobed at the apex and constricted into an inconspicuous translucent stipe-like base, laterally compressed calyx teeth, stamens with external (antesepalous) and internal (antepetalous) whorls somewhat unequal in size in each flower, small oblong to obovoid anther thecae with cleft-like ventrally inclined apical pores, and capitate stigmas.

Delicate rosette-like radicant perennial herbs 2-6 cm tall, mostly unbranched from the base. Cauline internodes ± rounded to bluntly quadrate, densely covered with dark brown (sepia-colored) minute (up to 0.1 mm long) gland-like trichomes that are variously compressed or tumescent with a rounded to shallowly bilobed apex and constricted into an inconspicuous translucent stipe-like base. Nodes ± compressed or somewhat swollen at the base of each petiole and covered with an indumentum like that of the internodes. Leaves opposite and decussate, isomorphic in size and shape in each pair. Leaves semi-succulent when fresh becoming chartaceous when dry; petioles 2-7 mm long, copiously covered with indumentum like the internodes; blades olive green adaxially, paler green to yellowish-green abaxially when dry, widely spreading, 0.6-2.5 × 0.4-1.2 cm, obovate to ± oblanceolate, 1-nerved but only vaguely evident on the abaxial surface, apex rounded, base attenuate to rarely obtuse, moderately to sparingly and irregularly covered on both surfaces with the gland-like trichomes of the internodes and petioles, the margins entire but commonly repand for at least the distal half of the blade, often hyaline and sometimes revolute to varying degrees when dry. Inflorescence a terminal umbelliform cyme of three to four flowers but commonly reduced to paired or single flowers on an erect solitary peduncle 1.3-2.7 cm long; pedicel 2.5-5 mm long, the inconspicuous subtending bracteoles 0.5 mm long and mostly less than 0.25 mm wide, narrowly and bluntly oblong-lanceolate. Flowers 5-merous and diplostemonous; hypanthium (at anthesis) 2 × 2 mm, infundibuliform, moderately to copiously covered with the gland-like indumentum like the internodes and peduncles; calyx tube 0.5-1 mm long, calyx lobes 0.5 mm long and 1-1.5 mm wide at the base, broadly deltoid, antrorsely to widely spreading, sparsely beset with indumentum like that of the hypanthium abaxially but essentially glabrous adaxially, the exterior calyx teeth (terminal extensions of the hypanthial vascular ribs) laterally compressed and projecting about 0.25 mm beyond the calyx lobes. Petals 4.5-5 × 2-2.5 mm, narrowly obelliptic to narrowly obovate, obliquely apiculate at the apex, pink but darker pinkish-red at the base, entire and eciliate. Stamens 10, dimorphic in size and forming a ring around the style at anthesis. Large (antesepalous) stamens 5; filaments 2.5-3mm long, pink; thecae 0.75 × 0.75 mm, white to pale yellowish when dry, oblong to obovoid, the apical pore ± ventrally inclined and cleft-like; connective somewhat thickened dorsally and prolonged dorso-basally into a deflexed acute or oblong appendage 0.2 mm long. Small (antepetalous) stamens 5; filaments 2-2.5 mm long; thecae 0.5 × 0.2 mm, white to pale yellowish when dry, narrowly oblong to obovoid, the apical pore ventrally inclined and cleft-like; connective thickened dorsally and prolonged dorso-basally into a deflexed acute or oblong appendage 0.1 mm long. Ovary globose, glabrous, apex flat or low-domed and bright red when fresh, 4/5 inferior, 5-locular; style 4 × 0.1 mm, terete and straight, glabrous and terminating in a capitate stigma that protrudes just beyond the clustered anthers. Capsule globose, 2.5 × 4 mm, loculicidal, enveloped by the hypanthium and persistent calyx lobes. Seeds ovoid-clavate to ovoid-cuneiform, beige to pale brown, 0.75 mm long and 0.5 mm wide at the chalazal end; lateral and antiraphal symmetrical planes narrowly ovate, the highest point toward the chalazal side. Raphal zone ovate to elliptic-ovate, ca. 25% of the length of the seed with a well-defined ± triangular vesicular swelling (bladder-like appendage) extending from the base of the raphe to the wider chalazal end, testa somewhat angulaterounded, irregularly and inconspicuously papillate.

Etymology. − The specific epithet, which is derived from the Latin word parvus, emphasizes the diminutive habit and size of its vegetative and reproductive organs.

Distribution and habitat. − Gravesia parvula   is known only from the Bemangidy-Ivohibe forest in southeastern Madagascar on the eastern side of the Vohimena massif that runs north of Fort Dauphin where it reportedly grows on rocks in dense evergreen rainforest at 112-395 m elevation ( Fig. 3 View Fig ).

Phenology. − Flowering and fruiting collections have been made in November, January, and April.

Conservation status. − Gravesia parvula   appears to be restricted to the Bemangidy-Ivohibe forest. This forest, which comprises about 25,000 hectares, is one of three protected sites comprising the Tsitongambarika forest complex (TGK) established by the Rio Tinto QMM biodiversity offset project in the Anosy region of southeastern Madagascar. These offset sites are intended to compensate for the loss of biodiversity that has resulted from the destruction of the coastal forest at Rio Tinto QMM’s ilmenite mining site at Fort Dauphin which is also in the Anosy region. The TGK forest complex, with about 65,000 hectares and more than 80% species endemism, is the largest expanse of lowland humid forest in southeastern Madagascar ( OLSEN et al., 2011). With georeferenced data from cited collections, we used GeoCAT ( BACHMAN & MOAT, 2012) to calculate extent of occurrence (EOO) and area of occupancy (AOO) based on a user-defined cell of 4 km ². The EOO for G. parvula   is <0.5 km ² and the AOO is 12 km ². We assign this species a preliminary status of “Endangered” [EN B2ab(iii)] following IUCN Red List Categories and Criteria ( IUCN, 2012) in view of its limited geographic distribution, small known population, and apparent restriction to rocky substrates. Although the forest in which this new species grows is currently protected, there are long-term challenges and concerns because this particular offset does not address the negative social impacts it is causing for nearby villages such as Antsotso where local villagers lost the land used to grow their manioc food crop at the edge of the protected forest. Every effort to protect the biodiversity of forests in Madagascar is to be applauded but biodiversity conservation can be most effective and long-lasting when alternative sources of income and forest products are made available to local communities affected by conservation offset projects ( OLSEN et al., 2011).

Notes. − Gravesia parvula   is readily assigned to Gravesia sect. Primuloideae H. Perrier   ( G. primuloides Cogn.   , type species) based on its herbaceous, rosette-like subacaulescent habit, umbelliform few-flowered inflorescence borne on an elongate peduncle, partially inferior ovary, unconstricted hypanthial apex below the torus, and anthers that are appendaged dorso-basally ( PERRIER DE LA BÂTHIE, 1932, 1951). This new species does not key satisfactorily to any of the 44 species in sect. Primuloideae ( PERRIER DE LA BÂTHIE, 1951) nor does it appear to have any close relatives among described species in Madagascar or continental Africa. Among species assigned to the subgenus Gravesia   and section, only G. biauriculata H. Perrier   is superficially similar in being a dwarf species but it has a consistently acaulescent rosette habit and differs by its ovate 5-7-nerved leaf blades that are cordate at the base, petioles 5-30 mm long with copious spreading or deflexed purplish trichomes, prevailingly 4-merous flowers, white petals, and anther connectives that are thickened and prolonged dorso-basally into a subacute appendage with two small lateral hooks ( PERRIER DE LA BÂTHIE, 1951: 85).

The stamens of Gravesia   are typically isomorphic in size and shape but at least one other species, G. lamiana H. Perrier   (also of sect. Primuloideae), has stamens with external (antesepalous) and internal (antepetalous) whorls somewhat unequal in size in each flower like G. parvula   ( PERRIER DE LA BÂTHIE, 1951: 105). In G. lamiana   the much larger ovate leaves (8.5-17 × 4-9.5 cm) are bullate adaxially, 7-9-nerved, and the anther connectives are unappendaged.

This species exhibits some striking morphological convergence with other members of the family. In habit, G. parvula is superficially similar to some of the dwarf acaulescent herbaceous species of the neotropical genus Macrocentrum J.D. Hooker of the tribe Merianieae ( PENNEYS et al., 2010). In Macrocentrum the flowers are solitary at the ends of leafy branchlets or secund in terminal few-flowered cymes, the anthers are isomorphic, linear-subulate with a pedoconnective prolonged below the anther thecae and a connective prolonged dorso-basally into an acute toothlike appendage, and the ovary is usually 3-locular (rarely 2- or 4-locular) and free from the hypanthium. Several dwarf species of Macrocentrum commonly grow on rocks or tree trunks, so this dwarf acaulescent or subacaulescent radicant habit may be an adaptation to life on these kinds of substrates. 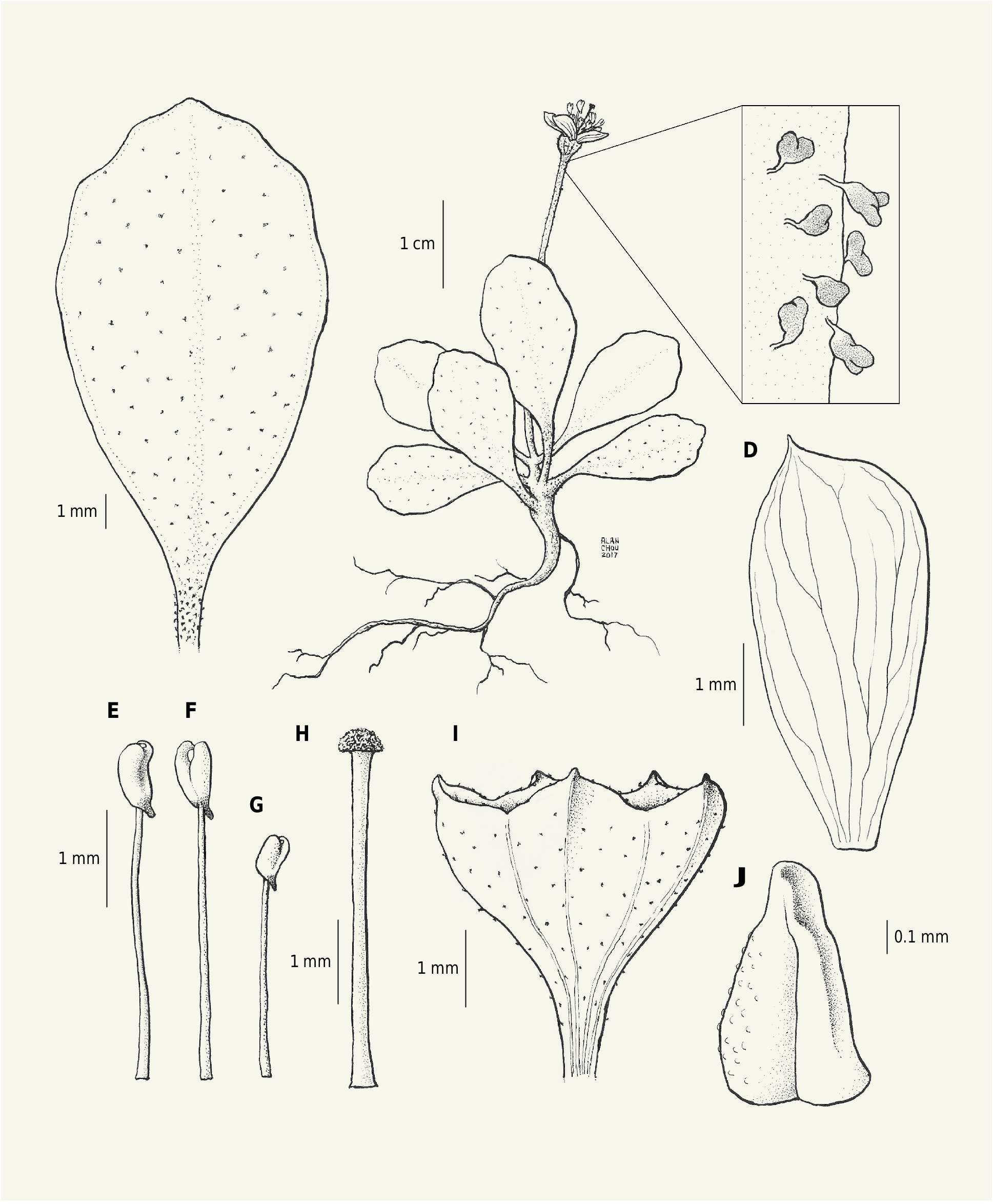 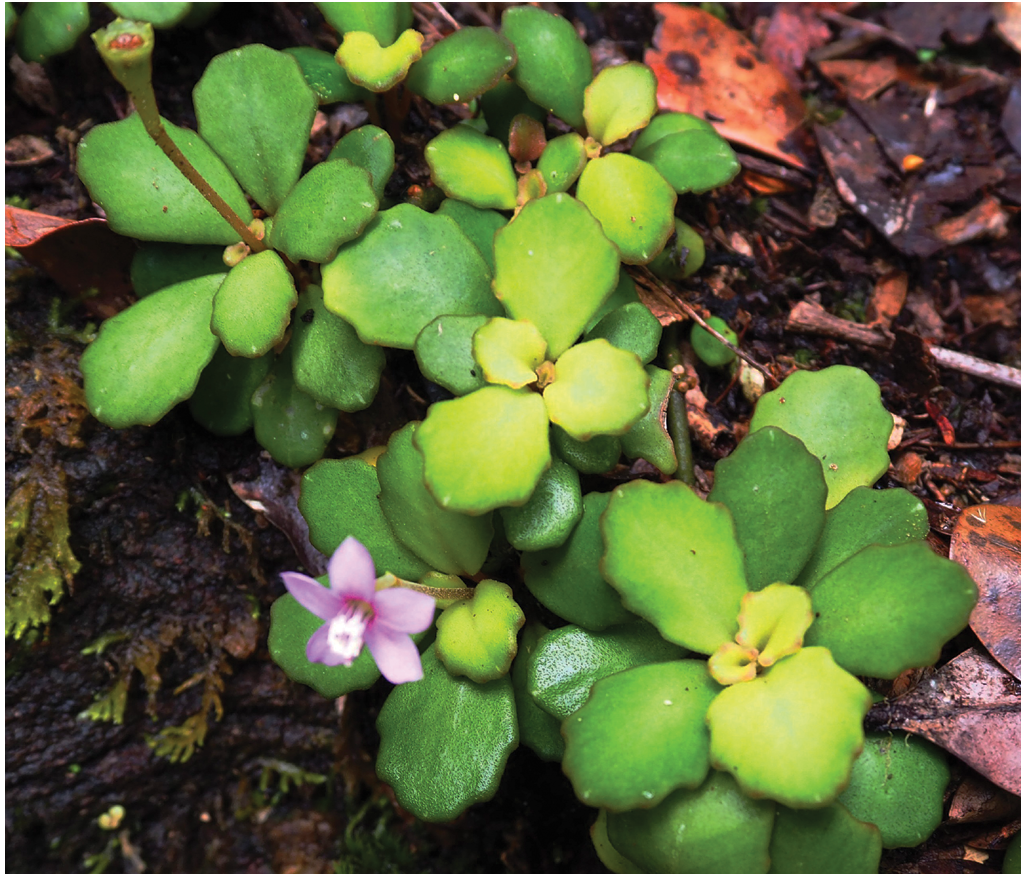 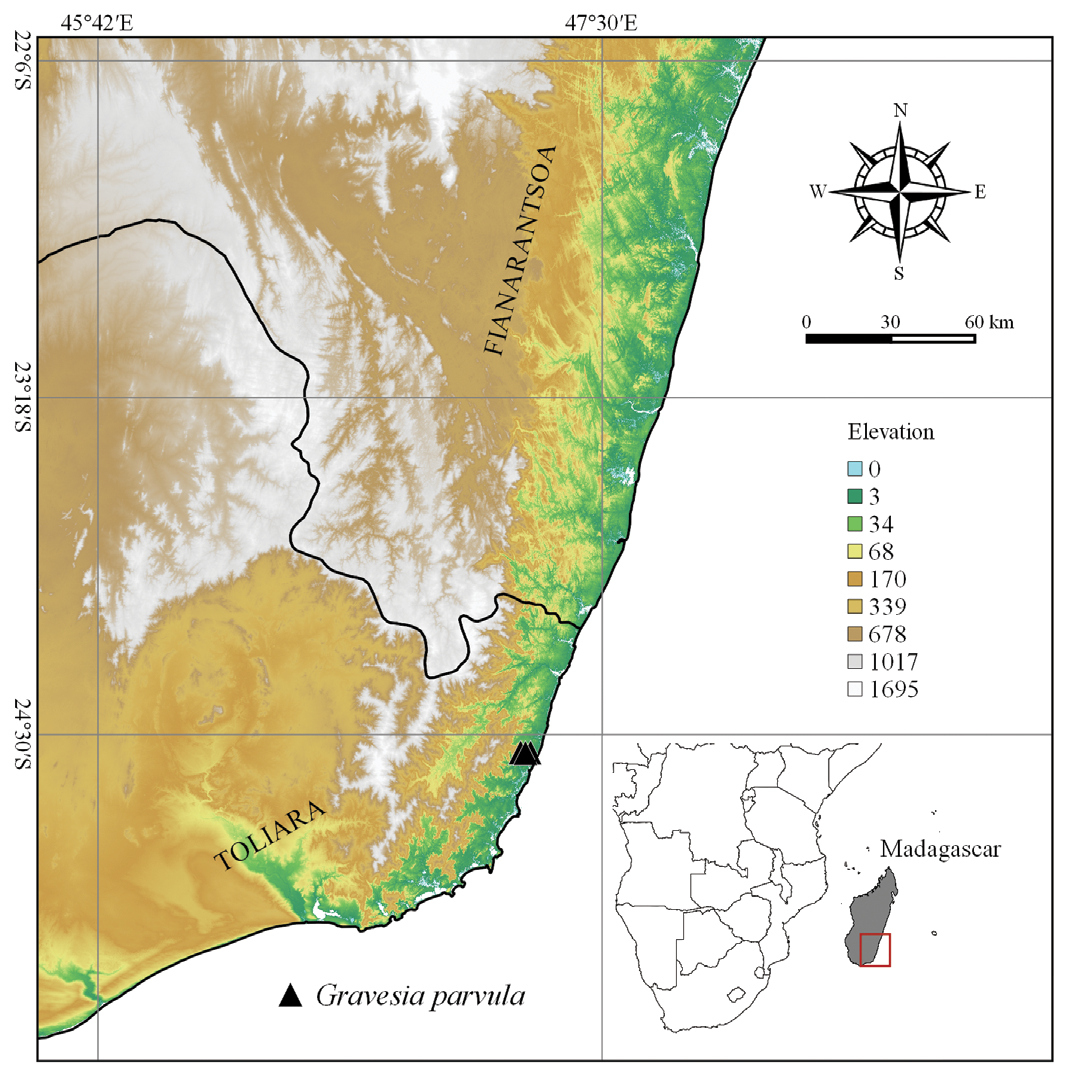