Description of holotype. Colony (USNM 1150095) about 80 cm tall ( Fig. 1B View FIGURE 1 ). Branches spread out in all directions so that overall width of colony about 70 cm. Basal plate 6 cm in diameter. Multiple stems arise from basal plate; thickest of these is about 1 cm in diameter. Colony branched to 12 th order; largest branches near base of corallum spread out somewhat laterally, with next highest order branches in many cases arranged uniserially on upper side, and extending vertically. Major branches are up to 35 cm in length; with 10 to 15 branches of next higher order occurring along 10 cm. Spacing of branches very variable, from 0.5 cm to 2 cm or more apart; generally, not more than two or three branches per 2 centimeters. On upper parts of corallum five or more orders of branches can arise successively on same side of each lower order branch, often on the convexly curved outer side. Most branches of corallum vertically directed although some on outer edges extend out somewhat horizontally. Distal branch angle very variable; mostly 30º to 60º; wider where lower order branches are upright, although in such cases higher order branches curved upward to become parallel to lower order branch from which they arose. Smallest terminal (unbranched) branchlets reaching maximum size of about 8 cm. Branch 7 cm long about 0.8 mm in diameter at proximal end, including spines, and about 0.4 mm in diameter excluding spines; diameter at midpoint 0.6 mm (total) and about 0.35 mm excluding spines. Average midpoint diameter of terminal branchlets 0.60 mm with spines included and 0.36 mm excluding spines (N = 10). Distal 3 cm of branchlets often collapsed when dried due to thinness of sclerenchyme.

Spines on branchlets generally conical, but slightly compressed laterally, with relatively acute apex and covered over much of their surface with small conical tubercles ( Figs 4–5 View FIGURE 4 View FIGURE 5 ). Spines unequal in size around circumference of axis; polypar spines on terminal branchlets mostly 0.2 to 0.24 mm in height (from middle of base to apex), but up to 0.30 mm; abpolypar spines on branchlets mostly 0.14 to 0.18 mm in height (range 0.13−0.22 mm). On branchlets, six to nine longitudinal rows of spines visible in lateral view. Distance of adjacent spines in one row mostly 0.3−0.34 mm (range 0.22−0.38 mm). Polyps mostly 1.1−1.4 mm in transverse diameter, arranged on branchlets in a single series with 6−7 per centimeter.

Morphological variation. Twenty samples of A. verticillata mauiensis   have been collected to date, including 10 complete colonies, ranging in height from 25 to 150 cm. A summary of the major morphometric features of these specimens is presented in Table 1. As has been described for other species of antipatharians, characters associated with the skeleton and polyps can be quite variable. Several of the specimens are sparsely branched with little evidence of a uniserial arrangement of higher order branches ( Fig. 8C View FIGURE 8 ), whereas in others this feature is evident throughout the colony ( Fig. 8A View FIGURE 8 ). In the samples examined, the height of the polypar spines (from middle of base to apex) ranged from 0.09 to 0.30 mm (mean 0.17 mm), that of the abpolypar spines from 0.05 to 0.20 mm (mean 0.12 mm); the spacing of the spines ranged from 0.20 to 0.51 mm (mean 0.32 mm); the transverse diameter of the polyps from 0.72 to 1.81 mm (mean 1.35 mm); and the density of the polyps from 4.49 to 7.79 per centimeter (mean 5.85 per centimeter). Wide variation in one character can occur within the same colony. For example, the size of the polypar spines of the holotype (USNM 1150095) ranges from 0.19 to 0.30 mm, and the polyp density in specimen B2 from Pisces  V, Dive 739 ranges from 5 per centimeter on some branchlets up to 8 per centimeter on others. However, there are also specimens where a character may be consistently above or below the average as in a specimen from Pisces  V, Dive 716 (specimen No. 6) where the polypar spines consistently measure, at least in the subsamples examined, not more than 0.15 mm in height. To estimate the typical range in maximum size of the polypar spines, the maximum size for each of the 20 specimens was recorded and an evaluation was made of the size frequency distribution ( Fig. 6 View FIGURE 6 ). For ninety percent of the colonies the maximum size of the polypar spines falls in the range of 0.19−0.27 mm, with a mean and median of about 0.22 mm.

Genetic Variation. Given the morphological variation in colony appearance and in characters such as the polyps and size of the spines, the possibility existed that a cryptic species was present among the suite of specimens examined. To address this issue, DNA studies of the new subspecies were carried out by coauthor M. Brugler.

Comparison of Genetic and Morphological Variation. There were fourteen specimens for which we had both morphological and genetic data. Across these fourteen specimens the diameter of the terminal branches ranged from 0.84 to 1.23 mm; the maximum transverse diameter of the polyps varied from 1.4 to 2.3 mm; the polyp density from 5.6 to 7.8 per centimeter; and the maximum size of the polypar spines from 0.15 to 0.30 mm. Thus, the genetic uniformity seen in these specimens is not reflected in morphological uniformity, and this is a clear indication of the morphological plasticity of this subspecies. The presence of such morphological plasticity necessitates the use of extreme care in describing new antipatharian taxa from a limited number of specimens as these may represent the extreme ranges of a single species. As in this case, future taxonomic studies of antipatharians would benefit greatly from using both morphological and genetic characters.

Genetic Comparisons. Unfortunately, soft tissue material suitable for DNA analysis was not available from the type specimen of A. verticillata verticillata   or from any specimens that could be referred to the typical form; therefore, a genetic comparison of the two subspecies was not possible. However, a specimen of A. verticillata mauiensis   was included in a large phylogenetic analysis of the Antipatharia   conducted by Brugler (2011). In that study, representatives of the genus Aphanipathes   did not form a monophyletic clade. A. verticillata mauiensis   (referred to in that work as ‘ Aphanipathidae   n.sp. 1, Pisces  IV-205-7 [new ID – Aphanipathes cf. verticillata   ]’), grouped sister to the largest clade of antipathids ( Antipathidae   was polyphyletic). A specimen of Aphanipathes pedata   from the Gulf of Mexico (DFH11-8A), a specimen identified as Antipathes sp.   (USNM-1086470), and a specimen identified as Aphanipathes   n.sp. from Hawaii (USNM-1010741) all grouped within the larger clade of aphanipathids ( Aphanipathidae   was also polyphyletic), but the first specimen was more closely related to Phanopathes spp.   while the latter two were more closely allied with Stichopathes spiessi   and S. dissimilis   , two species currently assigned to the family Antipathidae   , but with morphological affinities to the Aphanipathidae   . These results suggest that the current toolbox of morphological characters used to differentiate taxa may need to be reevaluated in light of recent ( Brugler 2011) and upcoming phylogenetic reconstructions of the order Antipatharia   (i.e., Sánchez, J.A., Brugler, M.R., Miller, K., Umaña, C., Dueñas, L., Opresko, D., in prep. The evolutionary history of the order Antipatharia   [black corals] as inferred from the predicted secondary structure of ITS2).

Distribution. Presently only known from the Keyhole Pinnacle in the Au‘au Channel between the Islands of Maui and Lāna‘i, in 88− 130 m.

The recognition of the Hawaiian form as a subspecies is based on our current state of knowledge that the morphological differences described above are confined to geographically separated populations. In all other respects, and particularly in the verticillate arrangement of the spines, these two forms are more closely related to each other than to other members of the genus (see discussion below). The designation of infraspecific forms is not unusual in antipatharians (see Schultze 1902; van Pesch 1914), and is a reflection of the typical wide range of variation seen in most morphological characters, especially when dealing with large suites of specimens. Furthermore, it has been reported that geographic dispersion of antipatharians is likely to be limited due to the planulae being negative bouyant, non-feeding, and short-lived ( Miller 1996); therefore, it would not be unexpected to find isolated populations forming unique morphotypes. Testing this hypothesis would require DNA markers for the analysis of intra-individual and inter-individual (population level) genetic variation; however, such markers are not yet available for antipatharians. In the present case, such investigations would also be limited by the lack of fresh tissue samples of A. verticillata verticillata   . We consider this a very important area for future investigation, not only for the species discussed here, but for antipatharian taxonomy in general.

Antipathes griggi   is an important component of the commercial black coral trade in Hawaii. While it is not known if or to what extent specimens of A. verticillata mauiensis   have been utilized commercially, the typical depth range of commercial harvesting is shallower than the shallowest reported specimen. No published data are available on the relative hardness of the skeletal axis of the two species, but gross observations of the samples used in this study would suggest that specimens of A. verticillata mauiensis   are not substantially different in skeletal density from those of A. griggi   . 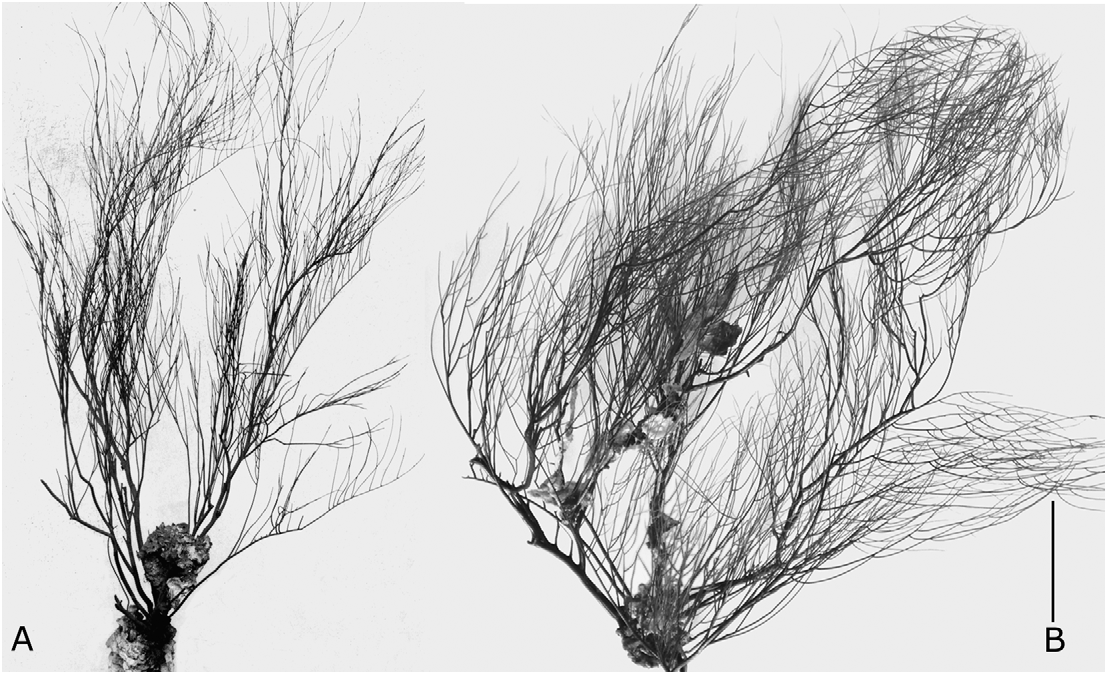