Type locality. Mauritius (no other data)   .

Diagnosis. Colony large (at least 80 cm in height), densely branched to the 10 th order or more, with long, straight or slightly curved branches often disposed in single series on upper side of lower order branches ( Fig. 1A View FIGURE 1 ). Distal branch angles variable, most frequently from about 45º to 60º. Polypar spines on branchlets 0.18−0.30 mm tall; abpolypar spines up to 0.2 mm; spines in longitudinal rows and in distinct verticils; spines mostly 0.25−0.36 mm apart in each row. Spines covered with minute conical tubercles extending from apex basally half the distance or more to the base. Tubercles present on both polypar and abpolypar spines. Tubercles on some spines becoming fused together laterally, and in some cases with fused apices forming wide shelf-like edge. Tubercles on distal edge of spines subequal or slightly larger than those on proximal edge. Height of tubercles along distal edge of polypar spines up to about 0.016 mm. Average density of tubercles on polypar spines 2.9/1000 µm 2. Polyps about 1.4 mm in transverse diameter, arranged in single series, with six to seven polyps per centimeter.

Description of the holotype. Based on the description given by Brook (1889), the holotype is 80 cm tall and 70 cm wide. A photograph of the type ( Fig. 1A View FIGURE 1 , scale not available) indicates that the branching is moderately dense, with many branches arranged uniserially. Brook (1889) reported that as many as six branchlets arose along a 3 cm length of branch, and that many of the branches were 6–10 cm long. Spines of the MCZ schizotypes ( Fig. 2 View FIGURE 2 ) are conical, slightly inclined distally (abpolypar spines inclined more than polypar spines), and with numerous tubercles on their surface. On branchlets 0.3 mm to 0.4 mm in diameter, the polypar spines typically are 0.24 to 0.28 mm tall (as measured from middle of base to apex), and the abpolypar spines are generally 0.14 to 0.2 mm. On a branch 0.4 mm in diameter the polypar spines measure about 0.20 mm and the abpolypars 0.14 mm. Six or seven longitudinal rows of spines seen in one lateral view on branchlets (excluding rows where spines only partially visible). Distance between centers of bases of spines in same row 0.27 to 0.36 mm, with about four spines per millimeter in each row (equivalent to four verticils per millimeter). Tubercles present on both polypar and abpolypar spines; conical, simple or double or triple peaked, some with fused apices developing into broad, shelflike edge; latter conditions resulting from fusions of adjacent tubercles. Size of tubercles quite variable; largest usually along distal edge; up to about 0.016 mm tall. Number of tubercles and number of fused tubercles vary from spine to spine and from branchlet to branchlet. Counts of tubercles made on three subsamples of schizotypes gave a mean density of 2.9 tubercles per 1000 µm 2 (N = 24). Spines having compound and fused tubercles occur more commonly on those parts of branchlets with a diameter of about 0.35 mm (excluding spines), whereas thinner and thicker parts of branchlets usually only have simple tubercles (NOTE: branchlets exceeding about 0.44 mm in thickness were not available for examination). On spines where only simple tubercles present, about 25 to 30 tubercles per spine visible in lateral view (including tubercles on distal and proximal edges). On spines with fused tubercles, estimated number of original single tubercles as high as 40 or more. Because only a few branchlets of the type were available for study, it cannot be concluded that fused tubercles are typical of the species, and in the original description of the species, fused tubercles are not mentioned, nor are they shown in Brook’s illustration (Plate 12, fig. 25). Brook’s illustration, however, is of a branchlet only 0.23 mm in diameter and, as noted above, fused tubercles are not common on such thin branchlets. Additional subsamples from the type as well as additional specimens from the type locality are needed to determine how common fused tubercles are within A. verticillata verticillata   (see also discussion of the specimen from Okinawa below).

Brook reported that the polyps in the type are arranged in a regular longitudinal series and that there were about six polyps per centimeter. On the MCZ schizotypes, three to four polyps occur over a branchlet distance of 5 mm, resulting in about seven polyps per centimeter. The transverse diameter of the individual polyps is about 1.4 mm.

Description of specimen from Okinawa. The specimen consists of two branched pieces that may have come from the same colony, one is 45 cm tall and the other 42 cm. A uniserial branching pattern is common in both. The longest terminal branches are mostly 6−7 cm long (maximum 10 cm). A 6 cm branchlet is about 0.3 mm in basal diameter excluding spines and 0.6 mm including spines. Spines ( Fig. 3 View FIGURE 3 ) are quite variable in size; the polypar spines range from about 0.18 to 0.30 mm on terminal branchlets; the abpolypar spines are 0.12−0.20 mm. Spines 0.35 mm tall are found on branches 0.8 mm in diameter. Spacing of the spines in one row is generally 0.25 to 0.31 mm. Spines on branchlets are similar to those in the type in having some double and triple tubercles, and a few fused tubercles with shelf-like edges. Average density of tubercles is also similar to that of the type, 2.9 per 1000 µm 2 (range 1.1−4.2 per 1000 µm 2, N = 21). Polyps not present. 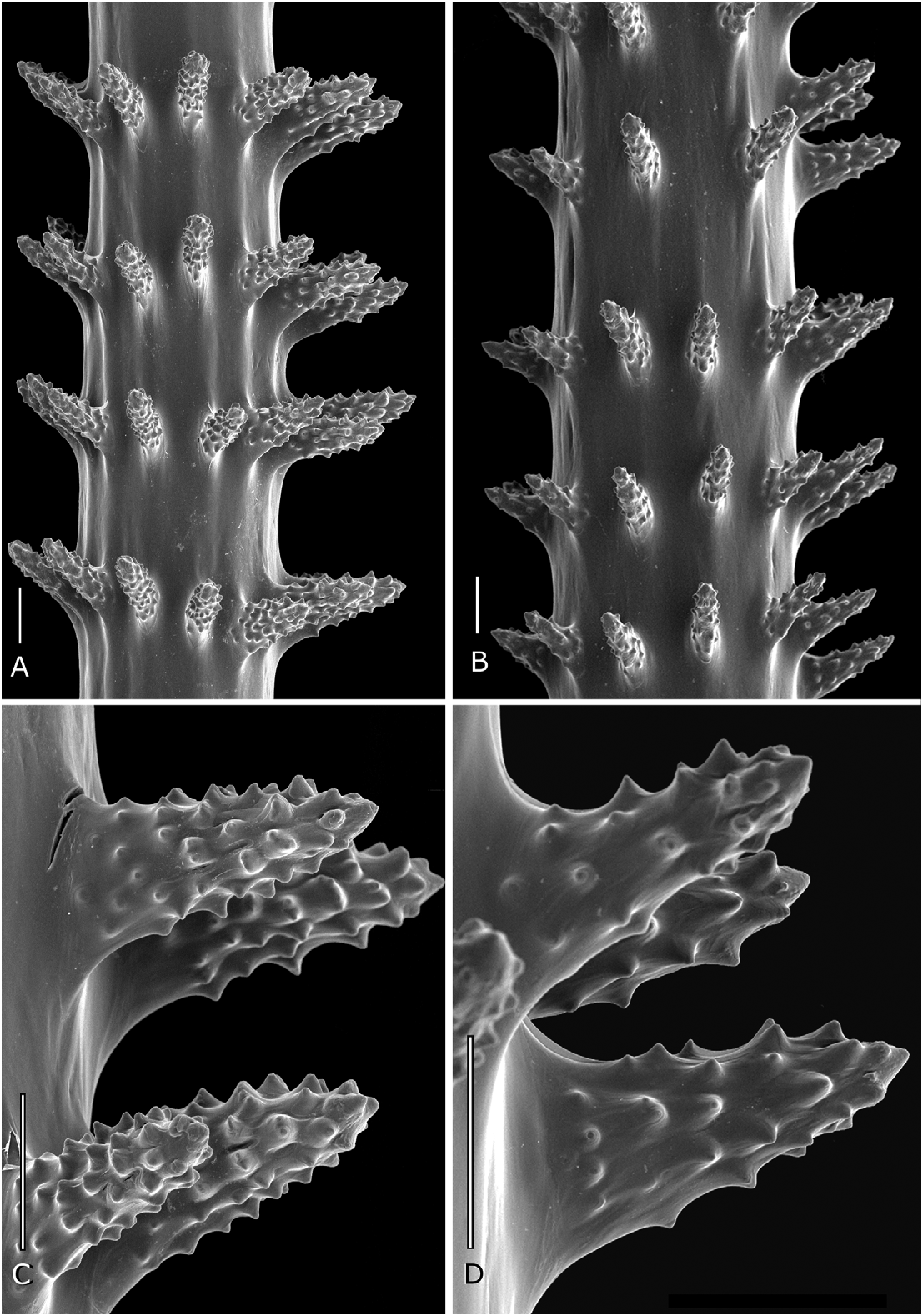