Material examined. Holotype (female) and 6 paratypes (5 females and 1 male) in sample A.

Description (measurements and statistics in Table 1). Body ( Figs 1–2View FIGURES 1 – 2) yellowish (before and after preparation). Eyes were absent in 5 of the 7 examined individuals (= 71 %, including the male), after mounting in Hoyer’s medium. Cuticle without granulation or pores, but the dorsum covered with numerous tiny and shallow polygonal or rounded depressions (pseudopores), 0.1–0.4 μm in diameter ( Figs 3–5View FIGURES 3 – 5). These depressions, visible under PCM as light spots with undefined edges, are a manifestation of a fine reticulum, therefore placing the species within the granulatum  group (Michalczyk et al. 2012 ab); see also the Differential Diagnosis below. Weak sculpturing is also present on the outer surfaces of all legs ( Fig. 5View FIGURES 3 – 5). Six peribuccal papillae (ventral papilla smallest) and six peribuccal lamellae around the mouth opening present. Two cephalic papillae positioned laterally.

Although eggs were not found, we should probably expect them to be oval, smooth and deposited in exuvium, i.e. following the character of all currently known Milnesium  species in which eggs were described.

Remarks. We only found one male, which was generally similar to the females. However, apart from the diagnostic secondary sexual trait in this genus (secondary branches of claws I in the shape of large and robust hooks, Fig. 10View FIGURES 10 – 11), the male also differed from the females of this species by a narrower buccal tube and shorter papillae, both in absolute and relative terms (see Table 1).

CHARACTER µm pt µm pt µm pt µm pt µm pt Although the majority of specimens had a typical claw configuration [2-3]-[3 - 2], two females exhibited minor claw abnormalities ( Fig. 11View FIGURES 10 – 11). One female had small basal spurs on external claws I-III and posterior claws IV ([3 - 3]-[3 - 3]) and the other female had small basal spurs on posterior claws IV only ([2-3]-[3 - 3]). These basal spurs were always less curved (sometimes completely straight) and smaller than those on other claws (<2.0 μm vs.>3.0 μm) and thus could be without doubt classified as developmental aberrations. Nevertheless, the presence of such claw abnormalities highlights the importance of examining a number of Milnesium  specimens to ensure correct identifications.

Etymology. We dedicate this species in memory of Professor Clark Beasley (06.06.1942.- 24.06.2012.), an American tardigradologists and the first Zootaxa Associate Editor for Tardigrada. Clark was also our friend and colleague who supported us throughout our adventure with tardigrades, especially in the early stages, and for this we will always be grateful to him.

Differential diagnosis. Milnesium beasleyi  sp. nov. by having a sculptured dorsal cuticle belongs to the granulatum  group within the genus ( Michalczyk et al. 2012 a, b). Including this new species, the group now consists of six species, which is equivalent to 32 % of all known Milnesium  taxa. The remaining five species with sculptured cuticle are: M. alabamae Wallendorf & Miller, 2009  , M. granulatum Ramazzotti, 1962  , M. katarzynae Kaczmarek et al., 2004  , M. krzysztofi Kaczmarek & Michalczyk, 2007  and M. reticulatum Pilato et al., 2002  . Cuticular sculpture in all known species of the group appears under PCM as bright dots or polygons with blurred edges. Scanning Electron Microscope (SEM) observations revealed that these dots/polygons are in fact shallow depressions in the cuticle (pseudopores) and therefore their edges can never be fully focused under PCM ( Kaczmarek & Michalczyk 2007, see also Michalczyk & Kaczmarek 2006). Interestingly, these depressions have in past been mistaken for granulation—hence the name of the nominal species for the group (see Michalczyk et al. 2012 a). In all species of the group (apart from M. beasleyi  sp. nov.) the cuticular depressions are densely arranged and the cuticle between very often forms a reticulum. In the new species, however, the depressions are less dense and more irregularly scattered. Large distances between the depressions, therefore, do not create an apparent reticulum.

Currently, excluding M. beasleyi  sp. nov., there are only two species with both sculptured cuticle and the [2-3]- [3 - 2] claw configuration: M. krzysztofi  and M. reticulatum  . The new species differs specifically from:

M. beasleyi  sp. nov. is similar to the species listed below by having a sculptured dorsal cuticle, but differs from them by:

M. beasleyi  sp. nov. is similar to the species listed below by having the [2-3]-[3 - 2] claw configuration, but differs from them all by having a sculptured dorsal cuticle and specifically from:

M. reductum  by the presence of accessory points on the primary branches of claws, stylet supports inserted in a more anterior position (61.6–65.6 in M. beasleyi  sp. nov. vs. 65.3–69.3 in M. reticulatum  ) and the absence of rounded basal thickenings under secondary claws,

Finally, we would like to draw the attention to the lack of basal thickenings at the bases of all secondary claws in M. beasleyi  sp. nov. As this trait is not always reported in Milnesium  descriptions, currently it is not possible to conclude whether the new species is unique in this character. However, whenever this character has been addressed the thickenings have always been present, which makes baseless claws of M. beasleyi  sp. nov. at least rare within the genus. 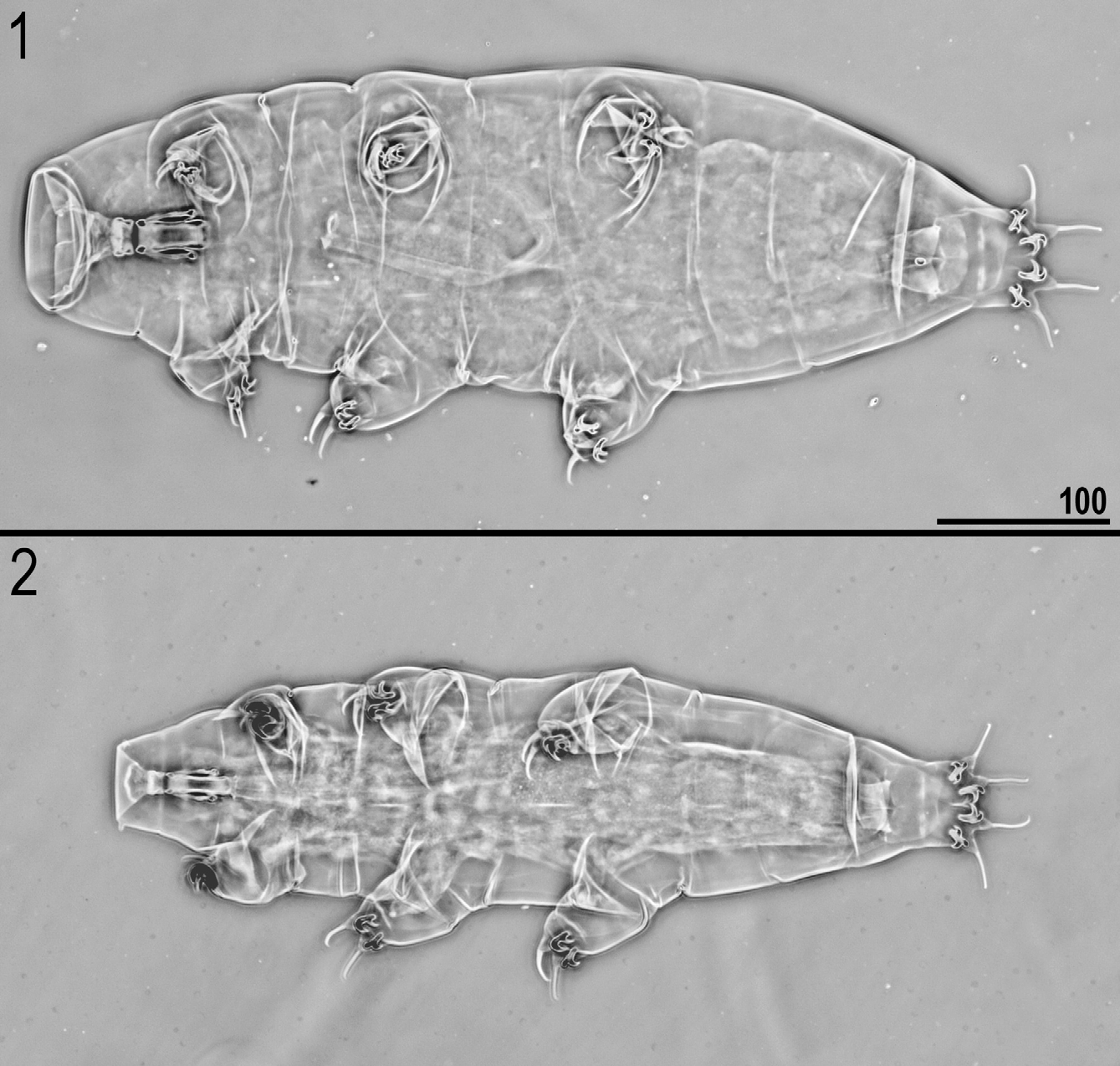 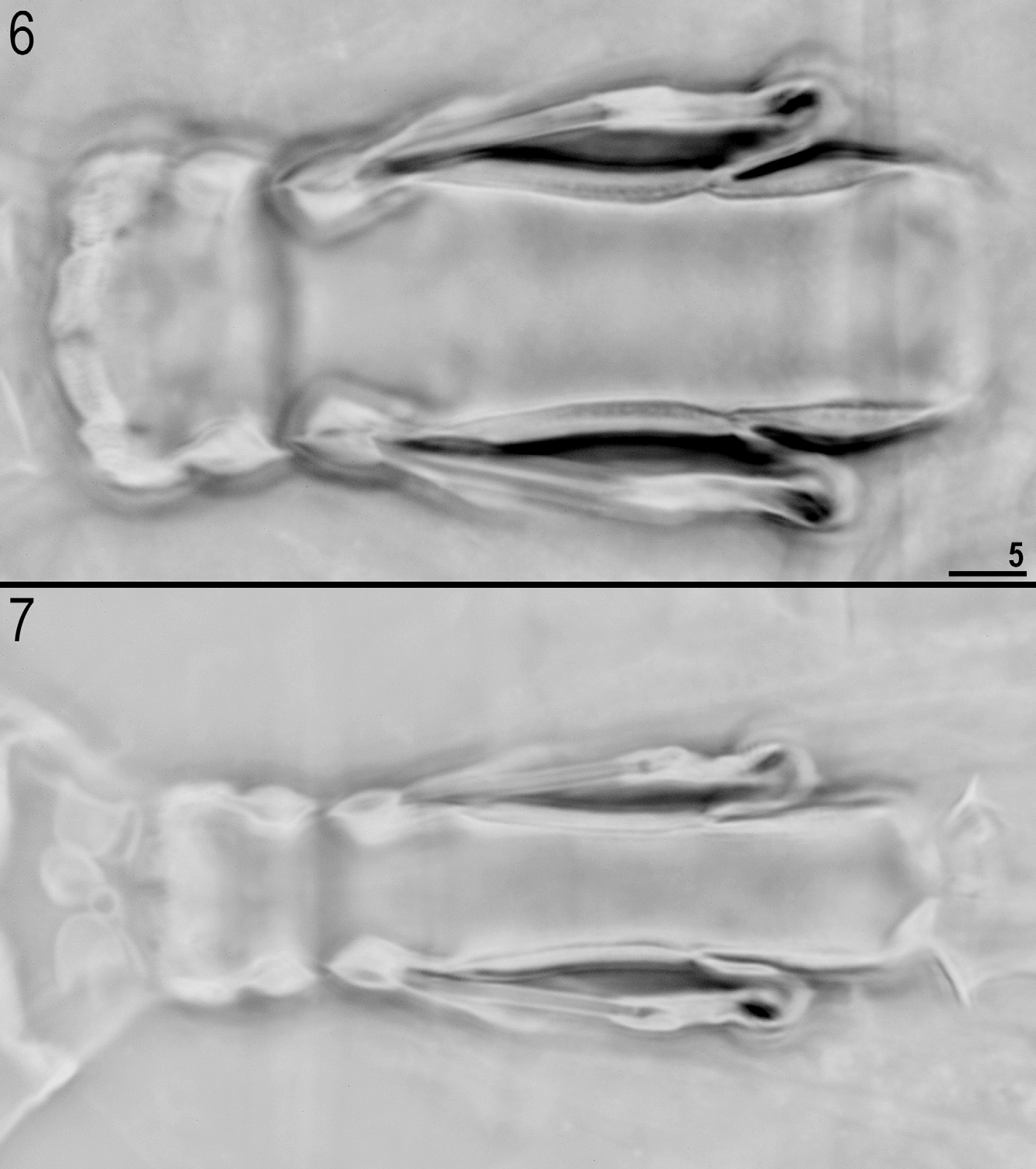 FIGURES 10 – 11. Milnesium beasleyi sp. nov. 10 — modified claws I of the only male found in the sample (paratype), 11 — posterior secondary branch IV with an abnormal, short and straight point c (indicated by an arrow, paratype), scale on Fig. 11 same as on Fig. 10.

FIGURES 10 – 11. Milnesium beasleyi sp. nov. 10 — modified claws I of the only male found in the sample (paratype), 11 — posterior secondary branch IV with an abnormal, short and straight point c (indicated by an arrow, paratype), scale on Fig. 11 same as on Fig. 10.

TABLE 1. Measurements and pt values of selected morphological structures of six females and a male from the type population of Milnesium beasleyi sp. nov. Statistics include females only (N = number of specimens or structures measured; RANGE = the smallest and the largest structure found among all specimens measured; SD = standard deviation; * = abnormally developed spurs (see also remarks )).