Whole plant densely greyish hirsute, closest to E. graminifolius   , from which it differs by the indumentum on basal leaves (densely hirsute and greyish on both sides of leaves vs. glabrous with ciliate-fimbriate margins or fine deflexed-pilose on both sides of leaves), trichome orientation (trichomes raised directed to the leaf apex, or orientated in all directions except towards the leaf base vs. trichomes raised directed only to the leaf base) and particular capsule dehiscence (capsule with basal lateral porose dehiscence vs. capsule with irregular apical rupture dehiscence).

Etymology: —The specific epithet is derived from the main and prominent characteristic of the plant⎯densely hirsute and greyish indumentum on the stem as well as on the both sides of leaves and involucral bracts.

Conservation status: — Edraianthus canescens   is known only from its type locality. Its population size is estimated to be less than 2000 mature individuals while the area of occupancy is smaller than 1 km 2. Therefore according to the IUCN (2001) Criteria it should be regarded as Critically Endangered, CR B1 i, ii, iv; B2a.

Discussion:—The newly described species, Edraianthus canescens   belongs to the E. graminifolius   complex (sensu Stefanović et al. 2008) which includes plants with long linear basal leaves, sessile flowers, either solitary or in terminal cluster, closely subtended by large leaf like or ovate bracts, narrowly lanceolate calyx teeth, which are pointed at the top, 2-3 times as long as the ovary and commonly with setulose or ciliate appendages; leaves and bracts are ciliate-fimbriate at margins only or fine deflexed-pilose on both sides, with hairs directed to the leaf base.

Edraianthus canescens   is easily distinguished from its closest relatives in the E. graminifolius   complex by the trichome orientation and the particular capsule dehiscence (Tab. 1, Fig. 2 View FIGURE 2 ).

An exceptionally dense greyish-green indumentum of leaves, stems, bracts and calyx, at first glance, is the most striking feature of the new species. However, unlike all the other representatives of the complex E. graminifolius   , which have trichomes raised directed to the leaf base, the new species has trichomes raised directed to the leaf apex, or orientated in all directions, except towards the leaf base. The significance of trichome orientation in differentiating Edraianthus   taxa has been recently discussed by Surina et al. (2009).

In addition, unlike other representatives of the E. graminifolius   complex with pronounced indumentum (specially in the southern distribution range⎯ E. siculus Strobl 1883: 551   , E. australis ( Wettstein 1887: 201) Lakušić ex Meyer 2011: 154   , E. horvatii Lakušić 1974: 44   , E. pubescens Meyer 2011: 156   whose indumentum density may vary substantially within the same population (from densely hairy to completely glabrous plants), all plants from the Ovčarsko-Kablarska gorge have a very dense gray indumentum.

The capsule with the basal lateral porose dehiscence is undoubtedly the most important character that separates the new species from all other representatives of the E. graminifolius   complex. The importance of fruit dehiscence in Edraianthus   and its position within Campanulaceae   is observed and recently discussed in detail by Stefanović et al. (2008). In that publication it was stated that in some individuals of Edraianthus   some fruits open apically while other fruits open laterally, reminiscent of those found in Campanula   . Taking into account that different states of capsule dehiscence can be found even within a single individual, it is clear that the taxonomic significance of the capsule dehiscence is limited for the higher-level family classification in Campanulaceae   . Basal pores and prominent axicorn are extremely rare features, registered only in two strictly endemic Edraianthus species   ( E. tare Lakušić 1987: 108   from sister group of the E. graminifolius   complex and E. glisicii   Č ernjavski & Soška 1937: 88 from E. serpyllifolius   complex, according to Stefanović et al. 2008). These characters have therefore high taxonomic significance at species level.

Furthermore, the overall habitus of the plants with a nested like structure of dense dried leaves at the base and dried stems that remain on the plants for several years, is a very specific morphological feature of E. canescens   .

In addition to the above-described morphological characteristics, the plants from the Ovčarsko-Kablarska gorge are separated from other representatives of the E. graminifolius   complex from the central Balkans by the shape of the bracts. Correspondence Analysis (CA) showed that, in respect to the qualitative characters analyzed, E. canescens   is significantly distinct from all studied populations within the E. graminifolius   complex (Rakić et al. 2012). Except for the extremely dense indumentum, resulting in the greyish color of the plant surface, these plants are characterized by the broad and short apex of the involucral bracts.

Taking all this into account, we conclude that the plants from the Ovčarsko-Kablarska gorge are morphologically clearly defined and can be easily distinguished from all the other species from E. graminifolius   complex, and hence, they merit rank of new species. 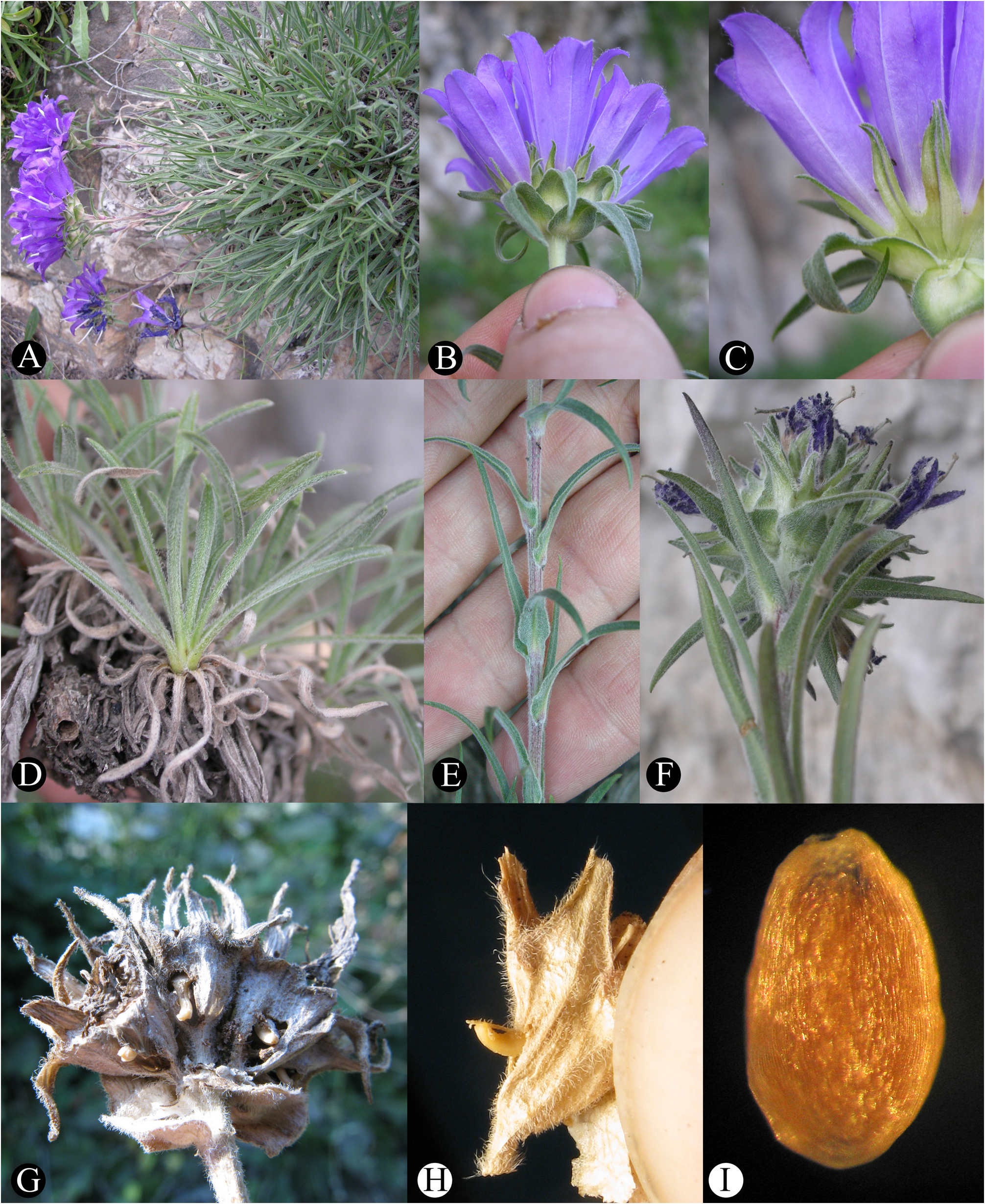