Members of this section are separated here into two informal groups, named for an exemplar species in each. The species of the Xylopia odoratissima  group (Species 12-25) all have an orange sarcotesta, and the group includes all of the African dryland species. The distribution of this group extends from Mozambique, the southern limit of the genus in Africa, north to Sudan and west to southeastern Cameroon (Fig. 8View Figure 8). The Xylopia acutiflora  group (Species 26-45) includes all African species known to have a sarcotesta that is light green, blue, or gray in color, as well as one species with an orange sarcotesta. Members of this group are found from Senegal in West Africa east to South Sudan and south to central Angola and western Tanzania.

The two groups are not given formal taxonomic status in this revision. While the Xylopia acutiflora  group was strongly supported as a monophyletic group in our phylogenetic analysis ( Stull et al. 2017), the Xylopia odoratissima  group was not. The groups are separated here to call attention to biological and ecological differences between them and as an aid to species identification.

Plants of the Xylopia odoratissima  group are mostly shrubs and understory trees, with only a few species reaching canopy size. The leaves are thin-textured and often hairy on one or both leaf surfaces. The inflorescences are 1-6-flowered, with each pedicel usually arising from the axil separately but occasionally arising from a common peduncle. The monocarps may be sessile or stipitate, and are usually thin-walled, with the seeds lying in a single row or rarely in two rows in a few species. The endocarp, visible in the dehiscent fruit, may be either pink or green. Seeds of all species have a thin sarcotesta that is orange to red and oily or greasy to the touch, but lack arils.

In Africa, the X. odoratissima  group has a predominantly Zambezian distribution (Fig. 8View Figure 8). Three subgroups may be distinguished. Xylopia gracilipes  , X. holtzii  , X. nilotica  , X. odoratissima  , X. shirensis  , and X. torrei  share petals of both whorls that are laxly spreading or rarely recurved at anthesis and monocarps with a green endocarp. In the X. arenaria  subgroup, consisting of X. arenaria  , X. collina  , X. keniensis  , and X. tomentosa  , the outer petals are erect at anthesis, with the inner petal apices emerging at right angles between the outer petals. The fruit endocarp is pink. In the X. gilbertii  group, which includes X. flamignii  , X. gilbertii  , and X. toussaintii  , the petals of both whorls are relatively broad and only weakly separating at anthesis and the inner petals bear circu lar glands at the base. The endocarp color in this group is unknown. Isolated within the group but included because of its overall floral morphology and sarcotesta color is X. wilwerthii  from the lower Congo River Basin. 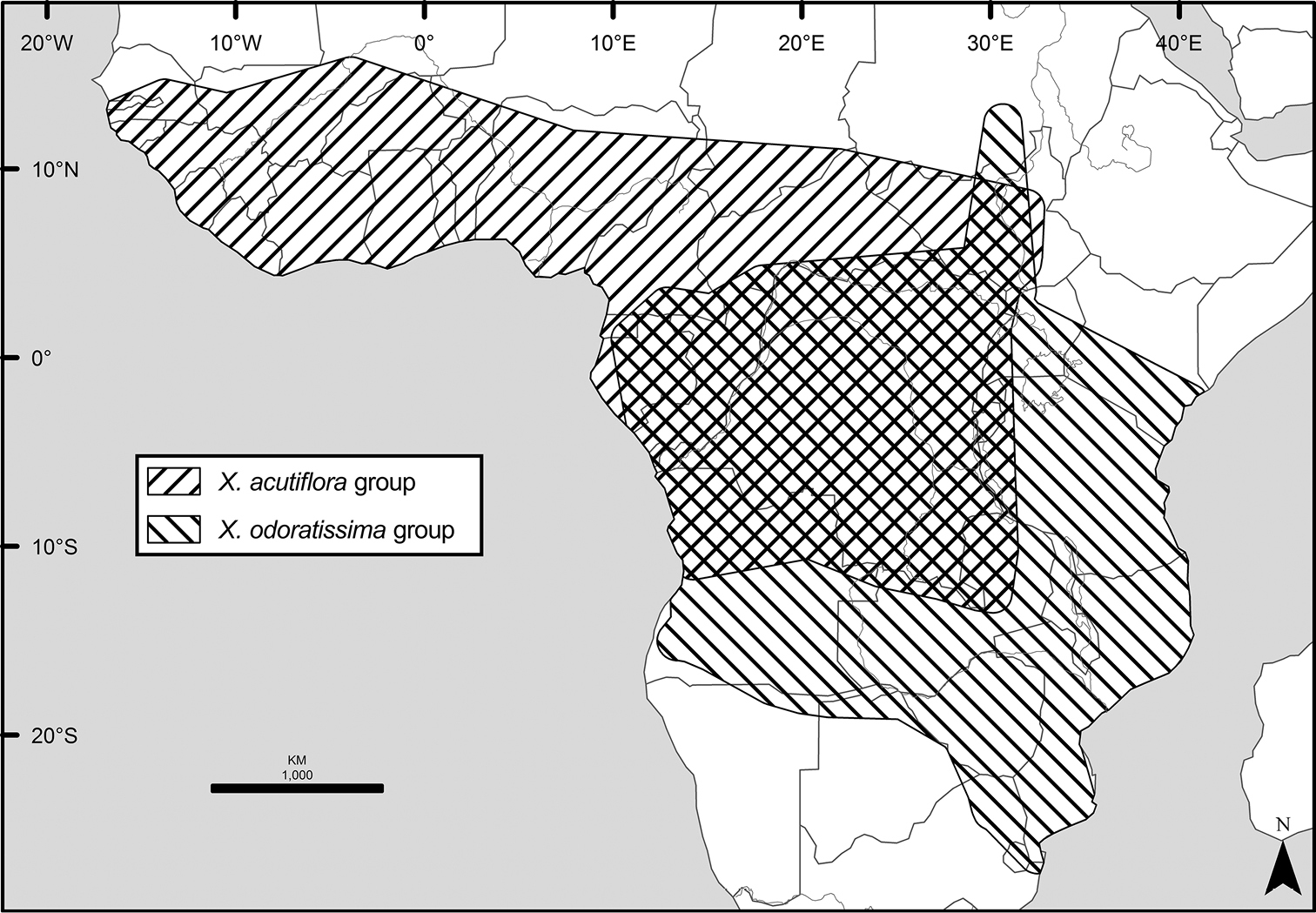