Diagnosis. A medium-sized Cnemaspis   (average snout to vent length 31 mm in an adult male, and 37 mm in an adult female), which can be distinguished from all known congeners in showing the following combination of characters: nostrils are not in contact with first supralabial; nostrils smaller than the ear opening, eight supra labials to angle of mid-orbit position and end of jaw at 12–13 supra labials; dorsal tubercles 56–58; dorsal tubercles small, rounded, pentagonal or hexagonal; with spine-like tubercles on flanks; midventrals 22; ventral smooth; subcaudals enlarged; no preanal pores; 12–15 femoral pores on each side; 13–15 subdigital lamellae and 5–6 basal lamellae in the 4 th digit; a dorsally prominent narrow black stripe on the neck, with a sharp yellowish margin; throat of males bright yellow, with small black stripes and / or spots; infra-labial margins of males with black stripes; tail cylindrical, with spine-like tubercles on the dorsal and lateral sides.

Rostral is large, and is partially divided. There are three internasals, with the mid scale being equal in size to the nostril, and the other two are larger. The supranasal and postnasal consist of one smooth rounded scale each and are bigger than the nostril, but slightly smaller than internasal. The head is covered with round, pentagonal or hexagonal shaped tubercle scales. These tubercle scales becomes progressively larger from the interorbitals towards the anterior region, but slightly smaller than the mid internasal scale. Small tubercles are located towards the lower part of the interorbitals. There are 32 interorbital scales. The mid interorbital scales are longer and slightly larger than the outer ones. The supraciliaries are slightly larger. The nostril is round, and is not connected with the supralabials. The nostril and the 1 st supralabial are separated by a postnasal. There are 12 supralabials at the base of the jaw, with eight at the mid orbit point. The 1 st supralabial is relatively larger, while the 2 nd, 3 rd, 4 th and 5 th are similar in size and the 6 th slightly smaller. The rest become smaller in size towards the posterior end. The dorsal tubercles are small, rounded, pentagonal and hexagonal in shape, and similar in size. There are 58 dorsal tubercles at the mid region of the body. Spine-like tubercles are present on the flanks. Mental scale is large, sub-triangular. The two pairs of pentagonal postmentals are smaller than the mental. The first postmental pair is separated by one small scale, and is connected with the first infralabial. The second postmental pair is smaller, and is connected with the 1 st and 2 nd infralabials. There are nine infralabials towards the jaw end, with six of them towards mid orbit point. The 1 st infralabial is bigger, 2 nd and 3 rd are similar sized, while the rest becomes progressively smaller in size. The 1 st – 4 th infralabials are longer than the 5 th one. The ear holes are oval shaped, bigger than nostrils, but smaller than eyes. There are 16 small scales around the ear hole. The scales in the throat are smooth, pentagonal/hexagonal in shape, the anterior scales being larger than the posterior scales. The gular scales are smooth. The ventrals of the mid ventral area consist of 22 scales, smooth and smaller than the postmentals. The scales in ventral portion of fore and hind limbs are smooth, with the scales in the hind limb being relatively larger than those of the forelimb. The preanal is slightly larger than the anal. The mid subcaudals are large. There are 15 rows of small scales between the 1 st large subcaudal and anus. Although the mid subcaudals are hexagonal in shape, the lower bor- der appears to be circular. This feature becomes prominent towards the tip of the tail. The subcaudals are devoid of keels. The tip of the tail shows signs of regeneration. There are 59 subcaudals (27 in the original tail and 32 in the regenerated segment). The dorsal area of the tail (from base to mid region) consists of a groove. The tail possesses spine-like tubercles, which are more prominent in the lateral side than the dorsal side. The digits are slender, elongate and clawed, while inter-digital webs are absent. The distal sub-digital formulae include 4>3>2>5>1 (fingers) and 4>3>5>2>1 (toes) ( Fig.24.B View FIGURE 24 .).

Colour in life. The body colour in the dorsal side is light brownish yellow. There is a thin black line between the interorbital area. There is a prominent black rectangular elongated mark in the dorsal side of the neck, which is longer than the pupil of the eye. The mid dorsal area of the body is lighter than the lateral sides. Irregular black lines occur on either side of the spinal cord. These lateral lines unite in the mid dorsal area and become prominent towards posterior area of the body. The granular scales in the dorsal area also contain black spots, resulting in the black lateral lines not being isolated. However, six lateral black lines are clearly visible below the prominent dorsal black rectangular square of the neck, and extend towards the dorsal base of the hind limbs. The original part of the tail is light in colour, with 12 irregular lateral lines, first of which shows a ‘W’ shape, located in the dorsal side of the tail base. The lower portion of this ‘W’ line is sharper. The scales of the tail also consist of small black spots. The lateral area of head contains three prominent black lines, the first being located in front of the eye, extending towards the neck. The second line extends from the 4 th and 5 th supralabials towards the anterior region of the eye. A similar line extends from below the eye towards the end of the mouth. The borders of the supralabials are dark black, with a yellow interior. The sides of the rostral scale and border of the nostrils are yellow in colour. The supraciliaries are also yellow. The pupil is ellipsoid and black, with the surrounding area being yellowish gold. The colour of the lateral area of the body is similar to the dorsal side, with small black spots scattered randomly. In the forelimb, the area extending from the axilla to the wrist bares five cross bars, of which the 3 rd bar in the elbow area is broader and prominent. The two lower bars are also more prominent than the first two cross bars. The margins of the scales connecting with the claws of each limb are black in colour. The black stripe formula of 2,3,5,5 and 3 is present on fingers in a yellow background. In the hind limbs, five irregular black cross bars extend from the groin to ankle region, though these are not very clear. A single prominent fine black line is located in the thigh region, up to the knee. The black stripe formula of 2,3,4,5 and 4 is present on toes in a yellow background.

Colour in alcohol. The dorsal body colour has become brown and yellow has turned in to grey. 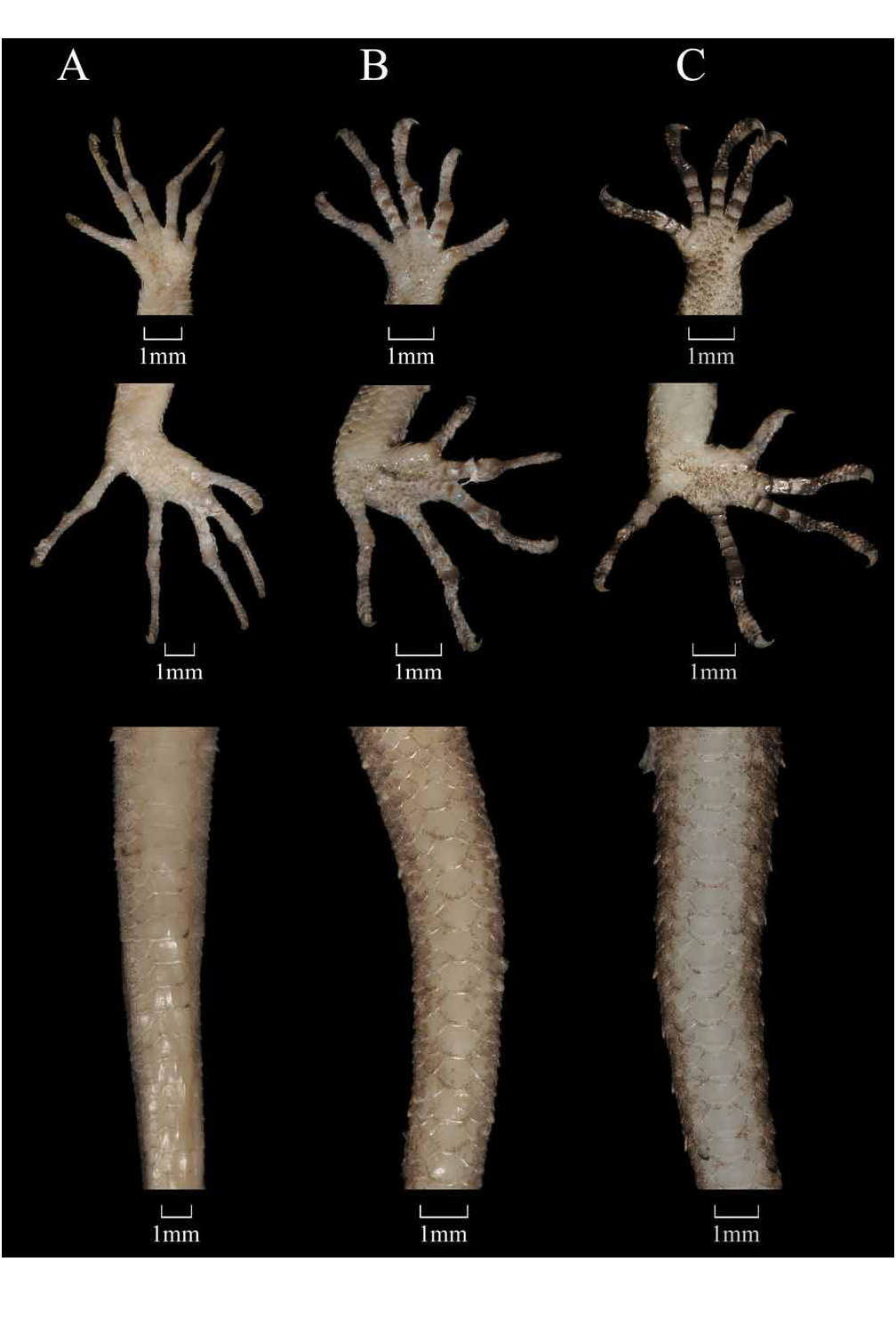