Description: The holotype has a stoloniferous mode of growth and encrusts many parts of a fragment of dead, finely branched scleractinian coral ( Acropora sp.   ). In the aspect shown in Fig. 1A View FIGURE 1 , it measures 45 mm between the arrowheadlabels.

Polyps are monomorphic and the distribution varies from well spaced to dense clumps ( Fig. 1B, D View FIGURE 1 ). Polyps arise from anastomosing stolons that criss-cross the substrate, and bridge gaps between branches ( Fig. 1 View FIGURE 1 Bs, Ds). Figure 1C View FIGURE 1 shows a polyp arising from a bridging portion of stolon. Polyps are present in many stages from moderately expanded to completely retracted ( Fig. 1 View FIGURE 1 De,r). Their base can vary from balloon-like to cylindrical, and is generally translucent revealing the insertions of the mesenteries in the wall of the gastric cavity as well as any retracted parts of the polyp. Polyp size varies considerably; the larger of the nearly retracted ones may have a cylindrical base in the vicinity of 3.8 mm tall and 1.3 mm in diameter.

The oral aspect of a polyp is shown in Fig. 1E View FIGURE 1 . Larger polyps can have tentacles in the vicinity of 1.6 mm long and 0.8 mm across the medial zone. There is a single row of plump pinnules along each edge of a tentacle; the common count is 12 per row, but it can be up to 15. Bifurcated or partially bifurcated pinnules are not uncommon.

Stolons vary in thickness from about 0.2–0.4 mm. Some parallel portions of stolons appear to have fused side to side, but there are no membranous structures. All stolons and bases of polyps are covered with a thin cuticle.

The holotype colony is completely devoid of sclerites. The bright specks resembling xeniid sclerites, visible in the polyp shown in Fig. 1E View FIGURE 1 and those in Fig. 2B–E View FIGURE 2 , are actually zooxanthellae.

Figure 2 View FIGURE 2 shows live examples of Phenganax parrini   , n. g., n. sp., in Daniel Knop’s aquarium from where the holotype was selected. It illustrates polyps expanded and also in various stages of retraction; the wrinkled cuticle covering a polyp base; and just how dense colonies can become in a man-made environment.

The colour of all preserved colonies is pale grey. Live colonies ( Fig. 2 View FIGURE 2 ) have a pale oral disc. The species has been observed at various locations in Indonesia, including Kotok Island and Raja Ampat, as well as in the Philippines, where it can be found in well-spaced groups of 20–30 polyps in dimly lit, sheltered locations below 10 m, commonly associated with Knopia octocontacanalis Alderslade & McFadden, 2007   and Clavularia spp.   (Daniel Knop, pers. com.).

Etymology: named for Austin Parrin, for his extensive laboratory work involving this species.

Aquarium notes: (Neil Blackstone, Austin Parrin & Daniel Knop, pers. com.): The species has an extraordinary ability to grow under almost any type of lighting from strong metal halide lights (250 watt) to dim fluorescent lamps. Under strong lighting some tentacles, virtually always three per polyp, generally show a bluish fluorescence. These darker tentacles can be seen in Fig. 2A View FIGURE 2 , and to a lesser extent in Fig. 2B View FIGURE 2 . Over time, from when first placed in an aquarium, colonies become slightly more robust with less feathery-looking tentacles, and develop a considerable increase in polyp density ( Fig. 2A View FIGURE 2 ). The species prefers low light regions with moderate flow, where the stolons may become more ribbon-like, and can only survive above 25°C.

Discussion: The small number of morphological features, and poor state of much of the literature, makes it difficult to establish if any previously described species are congeners. Nevertheless, we think candidates for possible inclusion in Phenganax   n. g., along with their distinguishing characters, are as follows.

— Clavularia reptans sensu Thomson & Henderson (1906: 402)   , Zanzibar, is unlikely to be Hickson’s species, which he said has tentacles “resembling” C. garciae   that has 30 pinnules/row. However, the 12–15 pinnules/row that their material has indicates it might be the same as Phenganax parrini   , n. g., n. sp.

— Clavularia celebensis Hickson, 1894   , Sulawesi, encrusts dead coral with narrow and wide stolons. Polyps up to 8 mm tall, tentacles with “numerous densely crowded pinnulae”, and no sclerites. Zooxanthellae not mentioned, but the tentacles are green and polyp body and stolons are brown. Recorded from 18 m depth.

Acknowledgements: We are indebted to Neil Blackstone, Austin Parrin and Daniel Knop for trusting us with this project (also to Daniel for his superb colour photographs used in Fig. 2 View FIGURE 2 ), and especially to Oscar Ocaña, Fundación Museo del Mar, Spain, for supplying samples of Cervera atlantica   for DNA analysis. Molecular work was funded by the Cnidarian Tree of Life project (NSF grants EF-0531570 to C. McFadden and EF-0531779 to P. Cartwright). 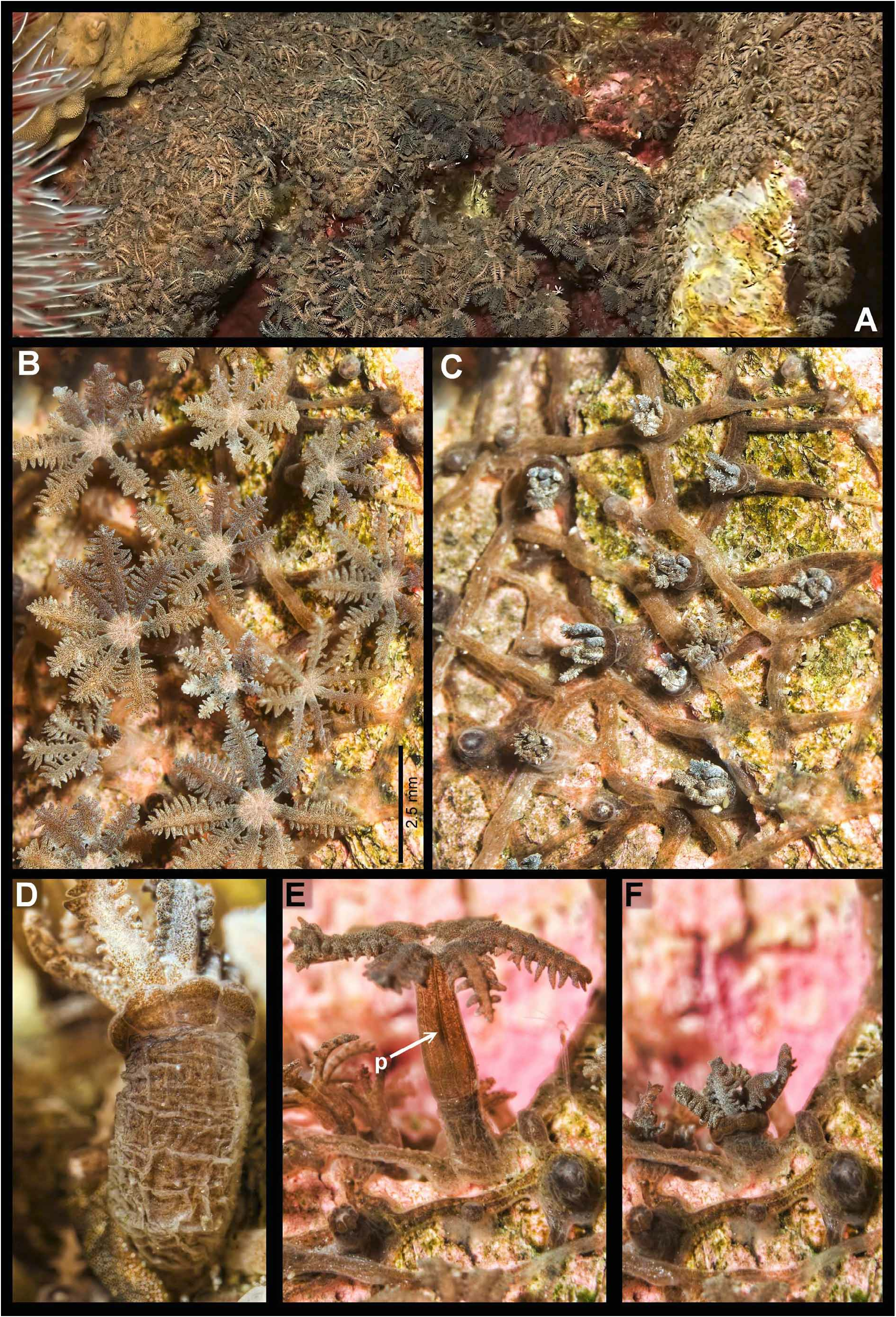