Radula (Appendix Table 30 View TABLE 30 ; Fig. 21 View FIGURE 21 G­M) typical of genus. Central teeth with 3­4 cusps on either side of median cusp; medium cusp about 1.5 to twice length, and twice width, of adjacent cusps, triangular, tapering to sharp point, sometimes distal part tapers more rapidly ( Fig. 21I View FIGURE 21 ). Face of central tooth with 2­4 (usually 3) pairs of cusps that lie well inside lateral margin, inner pair much larger than others, about 0.3­0.4 total height of tooth; lateral margins straight to slightly concave, at about 50­60º; basal tongue prominent, narrow, with pointed to rounded end. Lateral teeth with cusp formula 3­4+ 1 +3­5; with cutting edge about half length of lateral part of tooth; median cusp up to about 1.7 length of adjacent cusps, tapering, with rounded to bluntly­pointed ends; upper edge of lateral part of tooth at about 60º to cutting edge, lateral edge straight to slightly concave. Inner marginal teeth with 17­22 cusps, outer marginals with 8­11 cusps.

Anatomy. Gill with apices at right side of gill to about third of gill width anteriorly and quarter of width posteriorly; 59­67 filaments (n=3). Osphradium opposite middle of gill. Penis with accessory lobe slightly longer to subequal to penial lobe; accessory gland thick, of medium length. Pallial oviduct not examined (AMS C.203380).

Specimens attributed to this species are from three localities in the flood plains of the Gulf of Carpentaria. One sample is from near Bing Bong, about 754 kms from the type locality. Some specimens from this locality ( AMS C.318565 and VKC 24300 View Materials ) that were collected at the same time are nearly twice as large as the main sample and appear to represent second­year growth adults, while the large number of specimens in the rest of the sample are much smaller, although many have thickened peristomes. The large Bing Bong shells, as well as the small ones, agree closely with specimens from the type locality. Radular characters also generally agree but the cusp counts for the inner marginal are lower (12­14, compared with 17­22) in the Bing Bong sample .

This species differs from the other smooth­shelled species in being distinctly umbilicate in its smaller stages, the umbilicus narrowing in full­sized specimens and sometimes being almost closed. The whorls are very strongly convex and the shell outline is similar to that of the broadly­ovate forms of G. adusta n. sp. and it is with this species that the relationships of this taxon possibly lie. That species, however, has distinct axial riblets crossed by fine spirals.

Gabbia obesa is similar to G. napierensis which also has very fine axial threads, and fine spiral striae, but the axials are more irregular in G. napierensis . Both species have a reduced number of pairs of basal cusps (usually only two well developed, the third, if present rudimentary), and some specimens of G. obesa have a hint of a papilla­like median cusp. Both have a very strong angulation on the inner edge of the lateral tooth, this character differing from G. vertiginosa . G. obesa has a small, open umbilicus and simple to moderately thickened inner lip whereas G. napierensis has a narrow thickened callus behind the inner lip which covers the umbilical chink, a feature not seen in any other Australian bithyniid. In addition, G. napierensis has an opaque, white to yellowish­white shell whereas that of G. obesa is translucent, shining and has a yellow­brown periostracum. The two taxa also tend to differ in shape, although not consistently; G. obesa tends to have a shorter spire and less convex whorls.

This species is somewhat similar to short­spired forms of G. smithii but differs in being narrowly umbilicate and even more short­spired, lacks any spiral threads and the radula has two or more (usually three) pairs of prominent basal cusps on the central teeth.

This species somewhat resembles G. davisi but has a shorter spire, develops a thicker inner lip and differs in radular characters, in particular the possession of additional pairs of basal denticles. 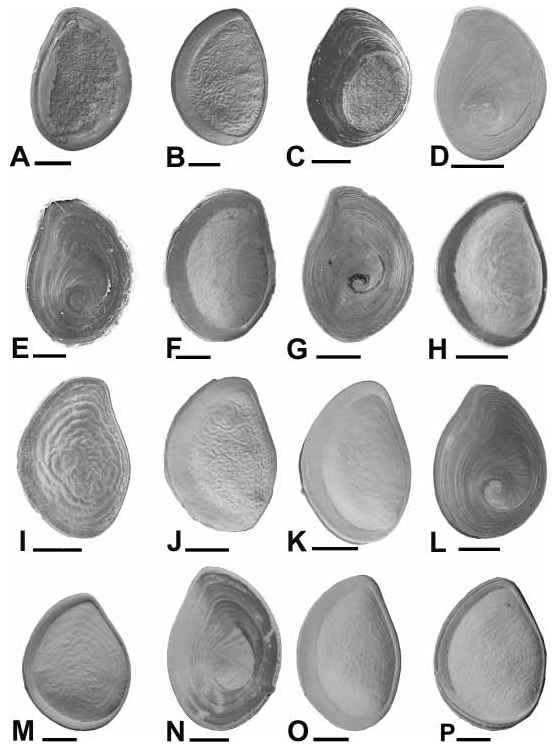