Radula (Appendix Table 30 View TABLE 30 ; Fig. 21 View FIGURE 21 A­C) typical of genus. Central teeth with 3­4 cusps on either side of median cusp which is up to about twice as long as adjacent cusps and its base about a third wider; median cusp elongate­triangular, evenly tapering and sharply pointed. Face of central tooth with 2­3 pairs of cusps lying just inside lateral margin, inner pair much larger than others, moderate in size (about a third of total height of tooth); lateral margins straight, at about 60­70º; basal tongue rather short, bluntly triangular. Lateral teeth with cusp formula 3­4 + 1 + 3­4; with cutting edge about 0.43­0.50 length of lateral part of tooth; median cusp about 1.5 length of adjacent cusps, tapering, pointed; upper edge of lateral part of tooth at about 60­70º to cutting edge, lateral edge concave. Inner marginal teeth with 17­20 cusps, outer marginals with 9­16 cusps.

Distribution ( Fig. 9 View FIGURE 9 ) and habitat. Known only from a large, swampy recharge spring on Doongmabulla Station in the catchment of the Belyando and Burdekin Rivers and material from one other locality near Mt White in the Isaac, Mackenzie and Fitzroy River catchments is also tentatively attributed to this species. Both locations lie between 21­23ºS in Queensland and are about 277 kms apart.

The description is based on the type material only. The type series is smaller in size than the other lot (AMS C.385439) which is tentatively attributed to this species from eastern Queensland, which reaches 5.2 mm in length, but otherwise has similar shell features ( Fig. 13 View FIGURE 13 ,H,I, 14A View FIGURE 14 ; operculum Fig. 15J, K View FIGURE 15 ). The radular characters ( Fig. 16K,L View FIGURE 16 ) are also similar, other than the lateral margins of the central teeth being weakly concave. The gill has more filaments (60­62 [n=2] compared with 45­49) and the penis and accessory gland are very similar.

The new species is similar to G. vertiginosa   in radular features but has a smaller, more globose shell with microcostae. It differs from G. campicola   in its more globose shell, presence of microcostae and in radular characters (less developed basal cusps, with the second pair much weaker than the innermost, nearly straight lateral margins of the central teeth, and nearly straight to weakly concave dorsal edge to the outer part of the lateral teeth). The shell morphology of G. rotunda   is also similar to that of G. iredalei   but that species has a much larger shell and has a relatively narrower cutting edge on the central teeth, which bear 4­6 cusps on the face (compared with 2­3 in G. rotunda   ), a shorter basal tongue and the lateral teeth have a more distinctly angled lateral edge.

The shell sculpture is reminiscent of G. affinis   (see below) but is finer and less regular while the shell of that species is more elongate and the central teeth of the radula have multiple basal cusps. 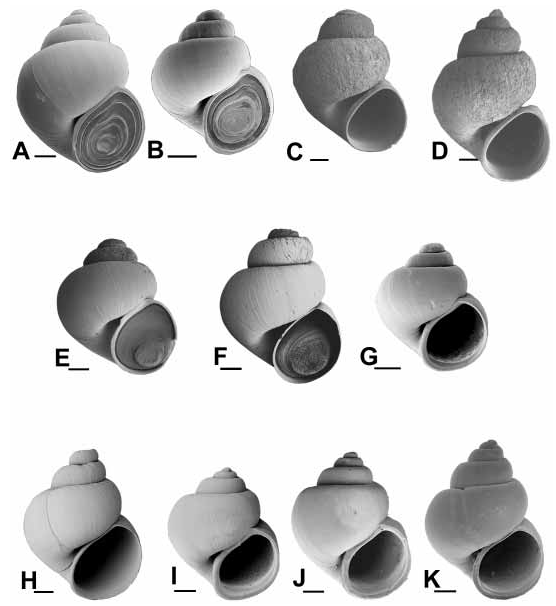