Loomis (1936) surveyed the known striariids, and added two new species, Striaria nana   and Striaria imberbis   . The latter species, according to Loomis, had characters that were not found in other Striaria   species, including the dorsum of the rings, which was said to be “depressed throughout, but [on] the anterior ones more strikingly so.” Additionally, the single male holotype appeared to lack the sinuate spines on the angles of the labrum, had prominently expanded lateralmost crests (the sixth) on the second ring, and prominent lobes on the trochanters of the second legs. Loomis only provided drawings of a second leg. Much later, Causey (1958) cited some of these characters (still unillustrated) and named a new genus, Vaferaria   , for S. imberbis   , emphasizing especially the “flattening” of the anterior rings. It is not clear from her description that she actually studied the holotype of S. imberbis   . Indeed, it appears that no mature male specimens of any of the species discussed (except possibly for S. granulosa   , and in that case not the types) were examined. Hoffman (1979, 1999) persistently misspelled the genus name as “ Vaferia   ,” and Shear & Krejca (2007) made the same mistake.

As a part of a survey of the described species of Striaria   , I studied the holotype and only known male specimen of S. imberbis   (Smithsonian National Museum of Natural History); collected south of Atascadero, San Luis Obispo Co., California, by O. F. Cook, 1 January 1928, along with a female and “a number of young”, unfortunately in rather poor condition. The gonopods had not been dissected. While the shelf-like sixth crest of the second segment, the lack of a labral spine, and the presence of large lobes on the second leg trochanters all proved to be repeatable observations, the “flattening” of the body, even anteriorly, was not. The structure of the rings was typical of other striariids, and it remains unclear what exactly Loomis meant in his description by “depressed,” though he may have been referring to the median sulcus, deeply infolded in species of Striaria   . I dissected and studied the gonopods, ninth legs and second legs at high magnification under the compound microscope ( Figs. 11–14 View FIGURES 9–14 ).

I found that the gonopods ( Figs. 11, 12 View FIGURES 9–14 ) and ninth legs ( Fig. 13 View FIGURES 9–14 ), while in some ways simple, were consistent with the striariid species now assigned to a revalidated Amplaria Chamberlin, 1941   ( Shear & Krejca 2007, Shear, et al. 2017). The second legpair ( Fig. 14 View FIGURES 9–14 ) and other secondary sexual characters including those cited in the description of the genus also conformed to the other species of Amplaria   . In redescribing A. nazinta ( Chamberlin, 1910)   , Shear et al. (2017) noted that the labral spines of this species were strongly reduced. In all species of Amplaria   so far studied, including several awaiting description, the second leg’s ( Fig. 14 View FIGURES 9–14 ) trochanters bear setae-crowned lobes of varying lengths, and some showed strong development of the sixth crest of the second ring. Since the gonopods ( Figs. 11, 12 View FIGURES 9–14 ) follow the Amplaria   plan and the other characters cited by Causey (1958) as distinguishing Vaferaria   are well within the ranges shown by other Amplaria   species, I consider Vaferaria   to be a junior subjective synonym of Amplaria   . This gives us Amplaria imberbis ( Loomis, 1936)   , new combination. 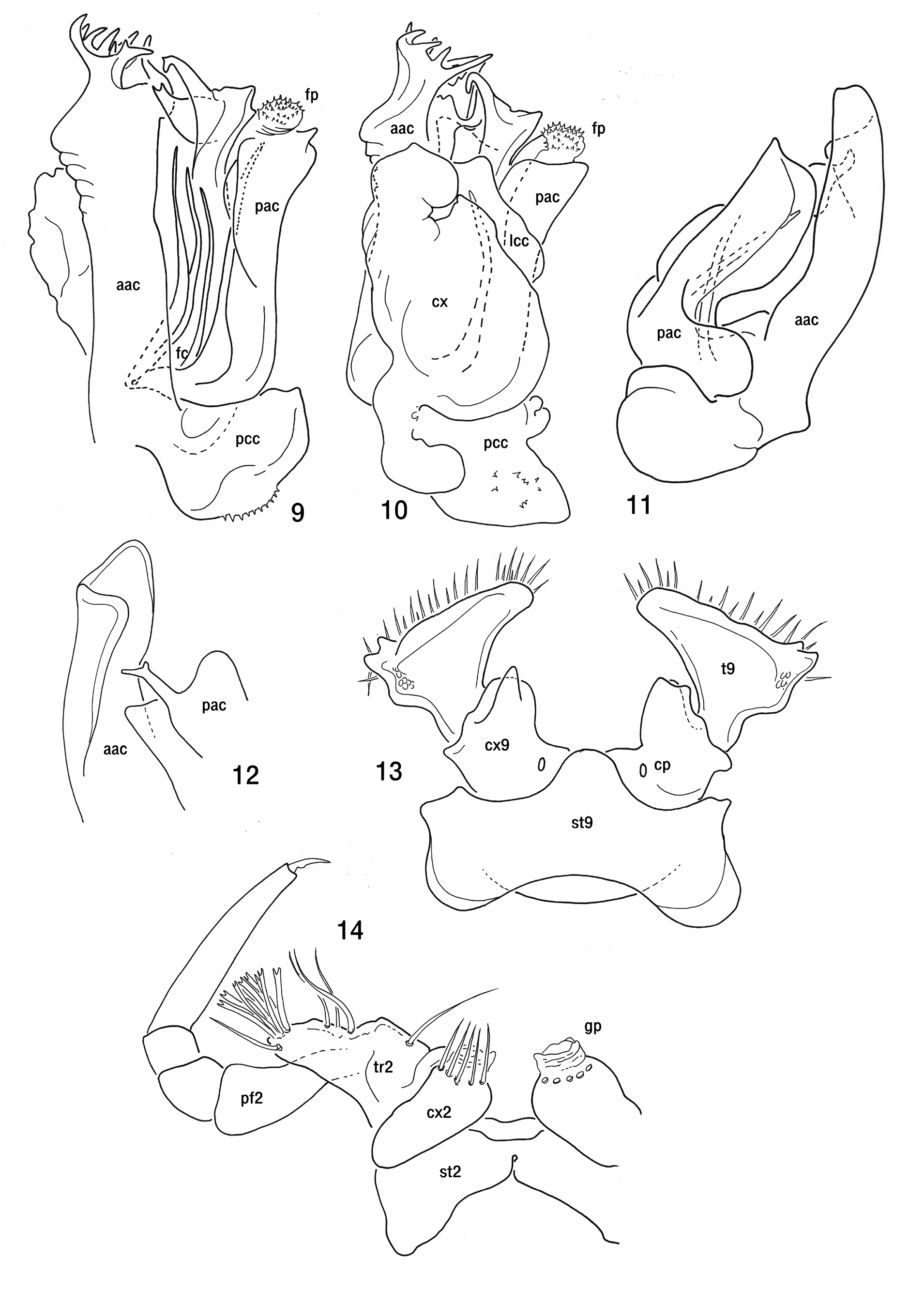