Etymology. – The species epithet honors Eric Akouangou, technician and field botanist at the Herbier National du Gabon [LBV], part of the Institut de Pharmacopée et de Médecine Traditionnelle [IPHAMETRA] of the Centre National de la Recherche Scientifique et Technologique [CENAREST]. In addition to co-managing a large collection of living orchids maintained in Libreville, he has been a co-collector of herbarium material comprising more than 7,500 numbers made in Gabon (7.5 % of all collections from the country), including the type of this species. His jovial character, dedication to fieldwork and professionalism make him an important and efficient collaborator. Eric is thus acknowledged for his remarkable contribution to the knowledge of the Gabonese flora.

Distribution and ecology. – Palisota akouangoui is known from Cameroon (South province), Equatorial Guinea (Centro Sur), Gabon (7 provinces), and the Republic of Congo (Kouilou province) ( Fig. 3 View Fig ). It grows in the understory of mature to secondary forests on terra firme, on slopes, ridges or near rivulets where the vegetation is not inundated. It is known from 10 to 850 m elevation.

Conservation status. – The EOO is 192,081 km ², exceeding the threshold for “Vulnerable” under Criterion B1, and the AOO is estimated at 72 km ², which is below the threshold for “Endangered” status under Criterion B2. Palisota akouangoui is known from 21 collections that represent 16 sub-populations, 3 of which are situated in protected areas, viz. Parc National des Monts de Cristal in Gabon, and Parque Nacional de Monte Alén in Equatorial Guinea. The main threat to this species are flooding associated with hydroelectric projets proposed on the Louétsi river in Ngounié province, oil exploitation in Rabi (Ogooué-Maritime), and forestry (Ogooué-Lolo, Woleu-Ntem, Estuaire and Nyanga provinces in Gabon, and Kouilou region in Congo). These sub-populations represent a total of 14 locations with respect to the most important threat (hydroelectric projects), which exceeds the upper limit for Vulnerable status. Palisota akouangoui therefore qualifies as “Least Concern” [LC] according to the IUCN Red List Categories and Criteria ( IUCN, 2012).

Notes. – The character of the lower anther becoming green after dehiscence of the pollen sacs has been observed in a single recent collection of P. akouangoui (Bidault et al. 3785), which was collected and photographed at the required developmental stage. We cannot, however, confirm whether this character is constant within the species, but material has been collected at this stage of the anther development from two other species (Bidault et al. 3717 for P. bogneri, Texier et al. 1437 for P. repens ), none of which shows as green coloration of the anther, which instead remains yellow. The occasional presence of a radicant cuff surrounding the infrutescence, which has sometimes been found under the leaf litter suggests possible vivipary and stoloniferous behavior. While vivipary has not yet been directly observed in P. akouangoui , it has been observed in P. flagelliflora ( FADEN, 1995) . Palisota akouangoui resembles P. bogneri , P. flagelliflora , P. repens and P. satabiei , but can be distinguished from them by the combination of a shortly creeping habit, an unbranched, decumbent inflorescence, and unequal stamens, the lower one being more robust and becoming green after dehiscence of the pollen sacs. In addition to being a strictly rosette species, P. flagelliflora is characterized by long, creeping, flagelliform inflorescences bearing solitary cincinni; P. bogneri differs in having subequal, consistently yellow stamens. By its shortly creeping habit, P. akouangoui can be easily distinguished from P. repens , which is a long-creeping species, up to 2 m long, with leaves evenly distributed along the stem. Palisota akouangoui most closely resembles P. satabiei , with which it has historically been confused, but the latter has branched inflorescences, which is a robust structural character that is never found in P. akouangoui , which bears compact, (sub-)globose inflorescences on a rather stout peduncle. Two collections cited as paratypes in the protologue of P. satabiei (viz. Satabie & Letouzey 384 and 407) in fact represent material of P. akouangoui , as indicated by the presence of multiple cincinni on the unbranched inflorescence, whereas P. satabiei has solitary cincinni on each ramification of its inflorescence. In the field, P. akouangoui and P. bogneri often grow together and have occasionally been gathered under the same collection number. For example, Schoenmaker 277 comprises two sheets deposited at WAG [WAG.1488450, WAG.1952609] that represent P. bogneri , whereas the specimen deposited at LBV [LBV0035326] clearly represents P. akouangoui , as indicated by the presence of an evident stem. Similarly, most material of Bidault 1969 represents P. bogneri , but the sheet at BRLU is of P. akouangoui . A few collections examined could not be assigned with certainty to either one of these species. For instance, Nguema 2879 could represent P. bogneri as it is apparently almost stemless, while it might instead belong to P. akouangoui due to its slightly elongated thyrse, but because the base of the plant is missing on every sheet, we were unable to provide a definitive identification. 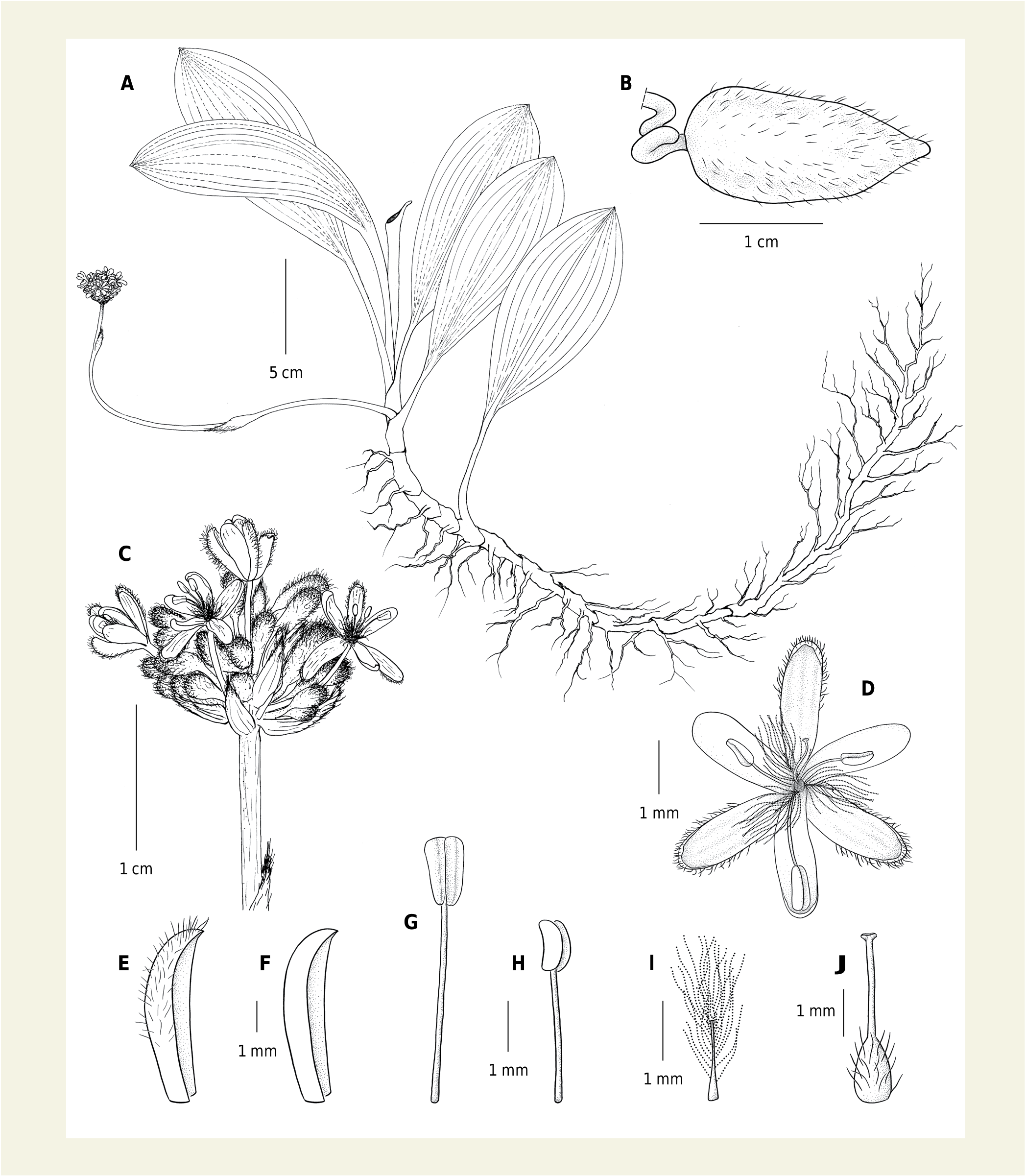 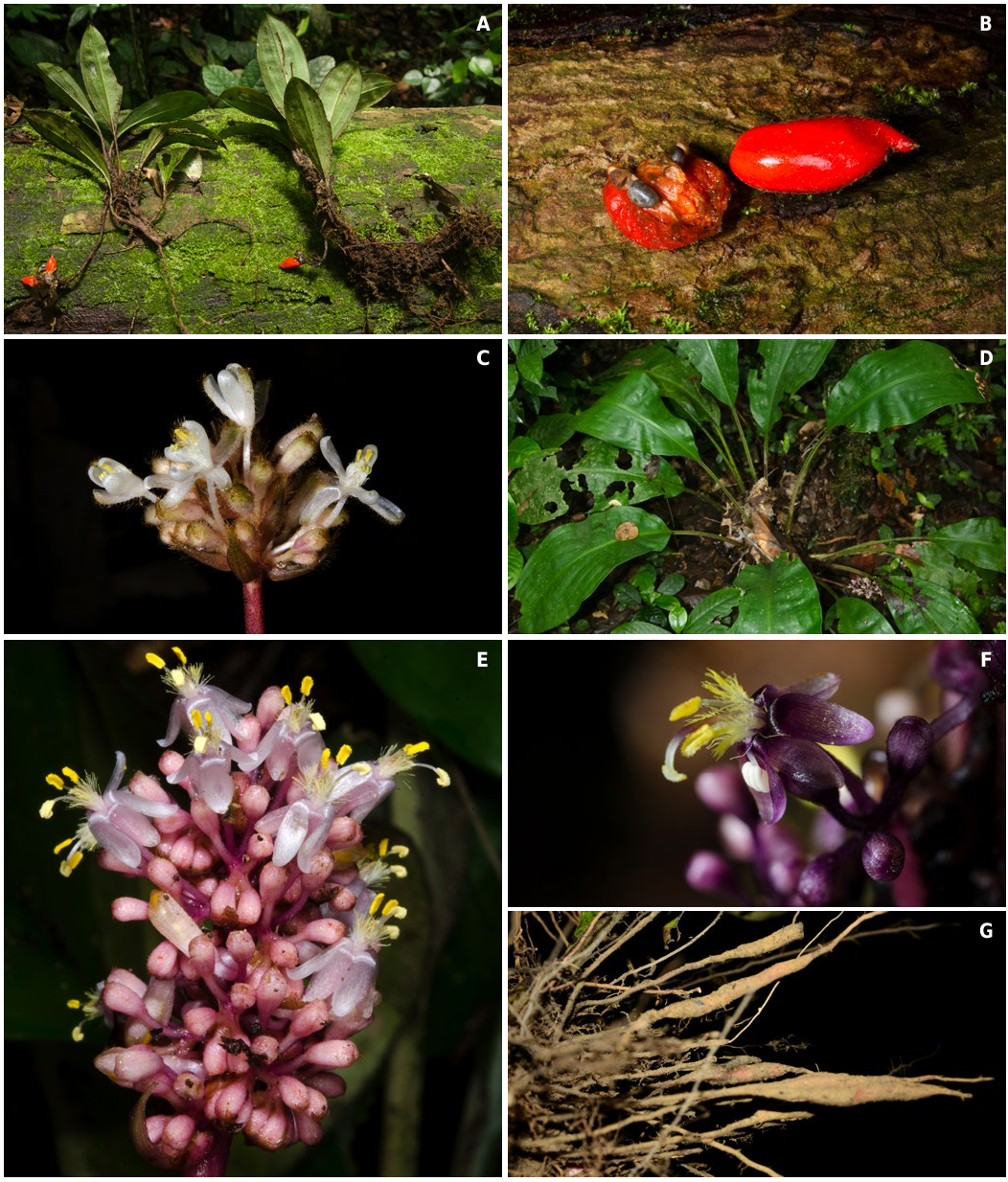 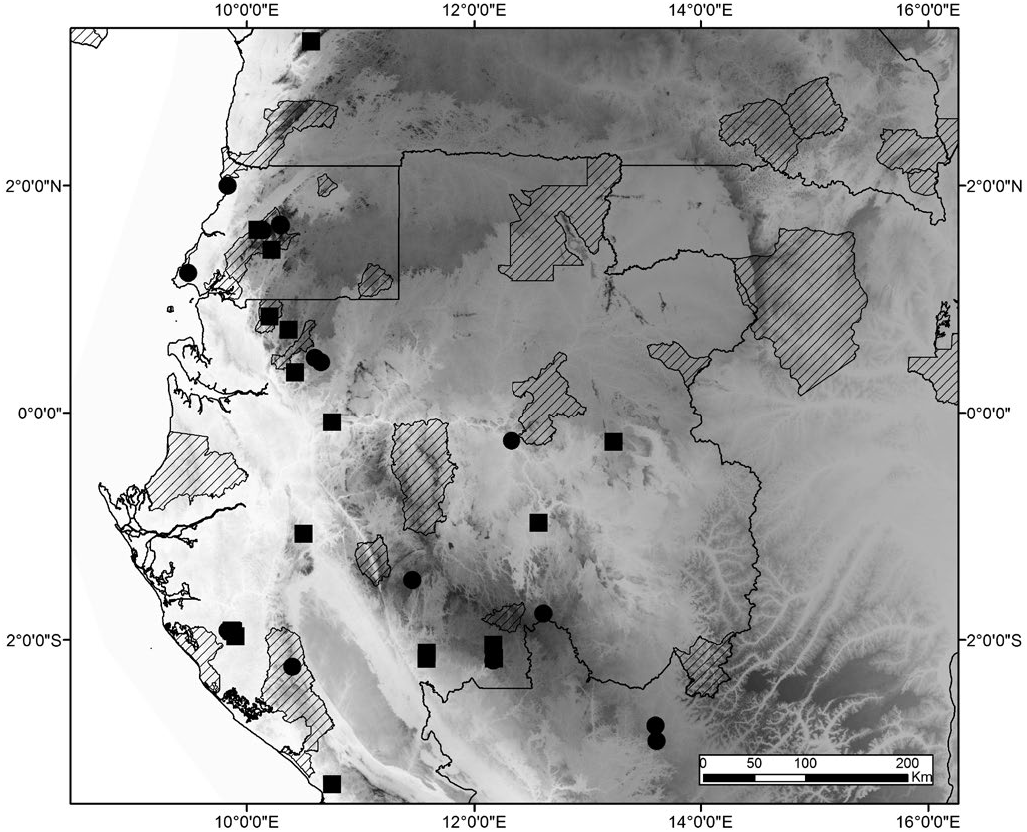