Referred specimen. One specimen, ZSM 640/2014 ( DRV 6087), collected on 10 June 2010 by D. R. Vieites, M. Vences, R.D. Randrianiaina, S. Rasamison, A. Rakotoarison, E. Rajeriarison and T. Rajoafiarison at Antevialambazaha Campsite on the Tsaratanana Massif (14.17413°S, 48.94521°E, 1589 m a.s.l.) agrees with its partly blackpigmented oral mucosa, tail size and shape, relatively spiny habitus, and elevation of collecting site with U. fangorn   . Unfortunately, no tissue sample reliably attributable to this specimen is available for confirmation of its identity. We therefore here assign it tentatively to U. fangorn   but do not include it in the morphological comparisons, and do not show the collecting locality in the map.

Etymology. The species epithet fangorn   is a noun in apposition to the genus name, derived from the name of a deep, dark woodland in J.R.R. Tolkien’s Middle Earth. Fangorn is a Sindarin word (one of Tolkien’s constructed languages) meaning “Treebeard” (derived from the Sindarin words fang, meaning beard, and orn, meaning tree); the same name (both as Fangorn and as Treebeard) is also given to the oldest of the Ents, a race of ancient tree shepherds. We use this name in reference not only to the similarities between Fangorn forest and the forests in which the new species occurs, but also to the tree-like appearance of Uroplatus   geckos, which make them seem like the “tree spirits” that are Tolkien’s Ents ( Flieger 2013).

Diagnosis. Uroplatus fangorn   sp. nov. is assigned to the Uroplatus ebenaui   species group based on its relatively small size, leaf-like, laterally-compressed body shape, short tail, and triangular head with supraocular spines. This new species is characterized by the following unique combination of characters: (1) short (TAL/SVL 0.32–0.43) and slender (TAW/SVL 0.07–0.08) tail, (2) oral mucosa with black pigment on the roof of the mouth and base of the tongue, and (3) relatively spiny appearance in males. Additionally, it is distinguished by high pairwise distances> 10% in sequences of the mitochondrial 16S gene from all other nominal species of Uroplatus   .

Description of the holotype. Adult male in good condition with an intact tail and everted hemipenes. SVL 62.5 mm, tail length 19.8 mm, maximum tail width 4.9 mm. For further measurements see Table 1 View TABLE 1 . Head triangular in dorsal view; canthus rostralis recognizable and almost straight; snout sloping strongly and continuously downward anteriorly; snout weakly depressed, short; eyes large (eye diameter 4.3 mm), bulging slightly above dorsal surface of cranium, directed laterally, pupil vertical with crenate borders; ear opening very small, round (horizontal diameter 0.9 mm), its opening facing posterolaterally, but also posteroventrally (ear opening clearly visible in lateral view but not in dorsal view); nostrils laterally oriented; body somewhat laterally compressed, without lateral dermal fringes; limbs without dermal fringes but with minuscule spines on the hindlimbs, and no clearly recognizable spines on the forelimbs; forelimb reaches beyond tip of snout when adpressed forward and does not reach the groin when adpressed backwards along body (forelimb length/axilla–groin distance 25.5/ 31.5 mm = 81%), hindlimb approximately reaches axilla when adpressed forward along body (hindlimb length/axilla–groin distance 33.8/ 31.5 mm = 107%); original tail length 32% of snout–vent length; membranous borders of the denticulated tail more or less symmetrical, slightly trapezoidal (i.e. broadening on either side and then narrowing again posteriorly), completely absent from the slightly spatulate tail-tip. Nares separated from each other by seven small granular scales, from the first supralabial by one scale, and from the rostral scale by two scales; first right supralabial distinctly taller than the others, but first left supralabial not distinctly taller than the others; rostral entire, much wider than tall; mental scale small, not clearly differentiated from infralabial scales; 16/15 (right/left) supralabials and 16/18 infralabials (as defined in methods above, i.e. not including small granular scales of the rictus); no enlarged postmental scales or chin shields; a small but distinct “horn”, consisting of a raised scale present between the nares; dorsal and ventral scales of head, neck, body, limbs and tail small, granular, juxtaposed and largely of uniform size interspersed with a few larger and partly raised tubercles. Two curved lines (rows of slightly enlarged scales) extending from the posterolateral parts of the head (nuchal region) converge on the neck forming a V-shaped pattern (triangular neck line). A similar, moderately distinct, angular line (also formed by slightly enlarged scales) is present between the eyes and connects the supraocular spines. Several dispersed spines on the posterior and postorbital part of the head and on hindlimbs; a dermal flap on each knee bearing a spine and an adjacent isolated spine; an isolated spine on each elbow; a prominent pointed flap on the posterior portion of each upper eyelid (supraocular spine); posterior border of eye fringed. Axillary pits not recognizable. Scales of the posterior ventral abdomen enlarged, flattened, and arranged more uniformly than adjacent scales; numerous spiny scales on the dorsal pygal section of the tail.

Hemipenes everted, bearing two lobes. Calyx with protuberance bearing honeycomb-like structures, especially on the sulcal side. Area of sulcus spermaticus is smooth. Each lobe with a dense field of pointed papillae at its apex.

Coloration of the holotype. After 15 years of preservation in 70% ethanol the color pattern remains similar to that of the living animal ( Figs 5A View FIGURE 5 , 8 View FIGURE 8 ) but its vividness and intensity have slightly faded. All dorsal surfaces are mottled beige and blackish in base color. The tail has a beige pattern on its dorsal pygal section, bordered by blackish color. The dorsum has weakly defined posteroventrally oriented lighter and darker beige chevrons, running apparently parallel to the ribs beneath them. A dark hourglass-shaped marking on the anterior part of the snout (anterior to the eyes), a dark band (slightly converging posteriorly) between the eyes, and a dark V-shaped area on the nape are well distinguishable. Additional, but less distinct dark flecks are present on the mid-dorsum, as well as several asymmetrical flecks on other parts of the body, including the arms, legs, and nape. Two light cream markings defined by brown borders are present below each eye, one larger at the posterior border and one much smaller at the mid-eye, both descending to the supralabials. The supralabials and the infralabials are generally dark gray in color. The venter, including the ventral limbs except for the lower hindlimbs, is slightly lighter beige than the dorsum, and less mottled. The pectoral region bears two elongated whitish spots. The postpygal section of the tail is of similar color dorsally and ventrally without distinct spots. The oral mucosa is centrally dark gray in preservative. The iris of the eyes is brown and the vertical pupil gray.

Distribution, natural history and conservation status. According to our material, U. fangorn   is known from (1) the type locality on the Marojejy Massif, and (2) Andrevorevo, south-east of the Tsaratanana Massif. Mitochondrial DNA sequences from Raxworthy et al. (2008) furthermore suggest the occurrence of the species in (3) Lohanandroranga (located close to Andrevorevo), and (4) in the Sorata Massif (see Fig. 1 View FIGURE 1 ). The confirmed elevational range of these sites is between 1638 m (Marojejy) and 1576 m a.s.l. (Andrevorevo); including the approximate range of the samples from Raxworthy et al. (2008) the species may occur between 1300 and 1800 m. a.s.l.; it can thus be characterized as rather range-restricted highland species from north-eastern Madagascar (see also Ratsoavina et al. 2013). Very little is known of the ecology of this new species. We found all individuals perched on branches in intact highland rainforest, partly in low-canopy ridge forest, at night.

Two species of the U. ebenaui   group were recorded in the intensive herpetological survey of Marojejy by Raselimanana et al. (2000): one named U. phantasticus   , which corresponds to the recently described U. finaritra ( Ratsoavina et al. 2019a)   , and one referred to as “ U. ebenaui   ” (from 1200–1950 m elevation), which probably comprises records of U. fangorn   . However, due to the probable presence also of the species described below as U. fivehy   sp. nov. on Marojejy, reliable attribution of these records is not possible at present. The highest records may be attributable to U. fangorn   , as it seems to be occurring mostly at higher elevations also in other areas, and thus may occur up to 1950 m on Marojejy.

To assess the conservation status of the new species, we here rely on the status assigned to other, co-distributed species with similar ranges and habitat. In particular, the distribution of Uroplatus fangorn   is quite similar to the frog Gephyromantis (Asperomantis) tahotra   , which is also known from Marojejy, Sorata, and the southern face of the COMATSA escarpment ( Scherz et al. 2017). That species is currently listed as Vulnerable under criterion B1ab(iii) due to its limited range size (<10,000 km 2), records from <10 locations, and ongoing decline in the extent and quality of its habitat (https://dx.doi.org/10.2305/IUCN. UK.2016-1.RLTS.T49565720A49566197.en). Given that all of these factors equally apply to U. fangorn   , we propose to list this species as Vulnerable under B1ab(iii) as well. FIGURE 1. Bayesian inference phylogenetic tree of the Uroplatus ebenaui group based on a 2686 bp alignment of five concatenated mitochondrial and nuclear gene fragments (ND4, 12S rRNA, 16S rRNA, COX1, CMOS). Posterior probability values are shown on the nodes (omitted for most shallow nodes). Uroplatus alluaudi was used as the outgroup (not shown). 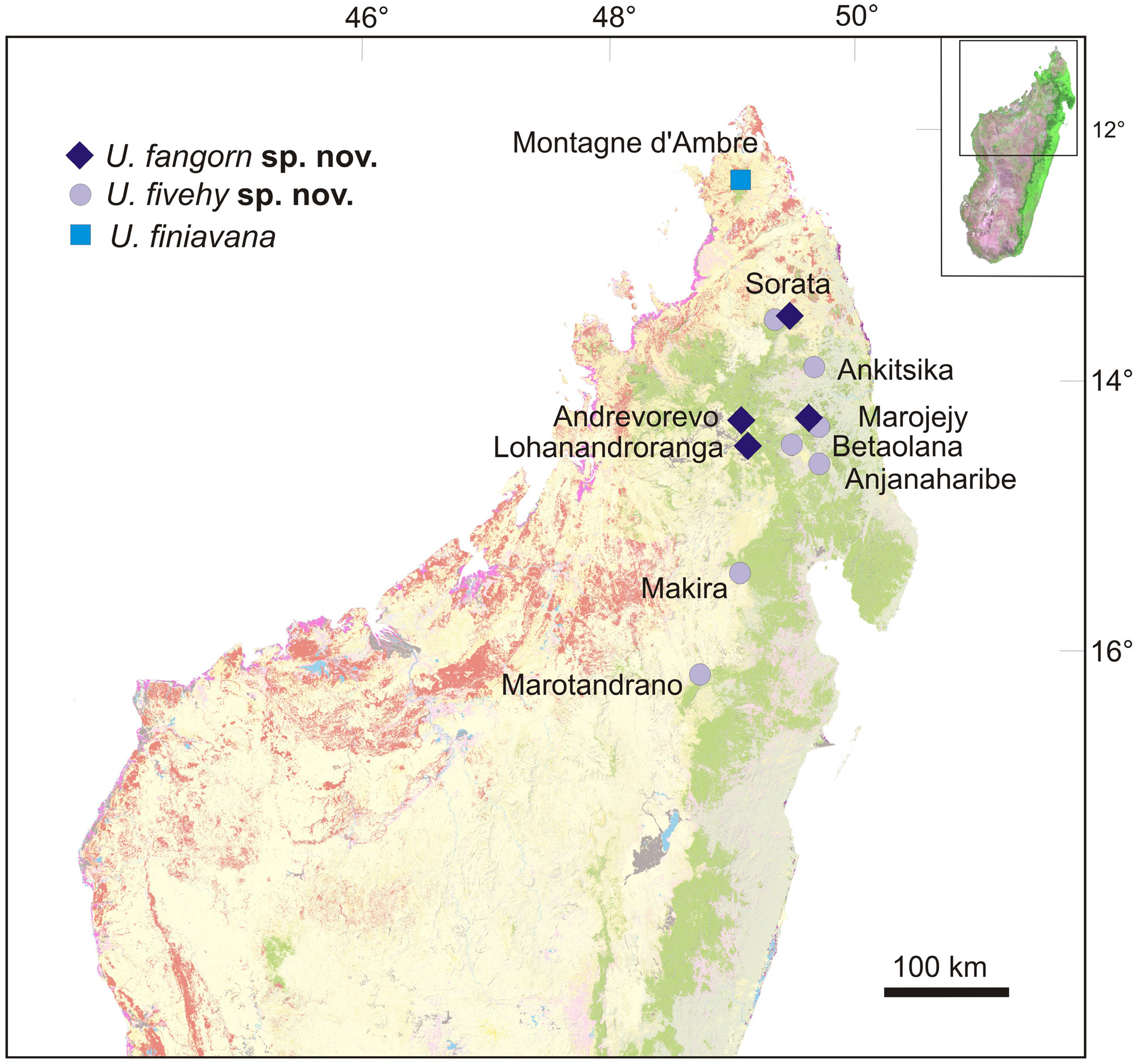 FIGURE 4. Morphological differentiation between Uroplatus fangorn sp. nov., U. fivehy sp. nov., and their closest relative, U. finiavana. The upper panel shows boxplots (median, quartiles, minimum/maximum and outliers) for selected meristic and morphometric variables and ratios; asterisks mark comparisons between U. fivehy and U. finiavana that were significant in Mann-Whitney U tests (* P <0.05; ** P <0.01). No statistical comparisons were performed for U. fangorn due to low sample size (N = 3). For original values of measurements, see Table 1. The lower panel shows intact (not regenerated) tails of individuals of the three species, illustrating differences in size and shape between species and sexes (all tails from males except where indicated as females).