Although Galiano (1963) redescribed Simon’s original four species, her illustrations are limited in number and detail. Thus, I give new figures of Simon’s original four species, including the first published figures of their bodies and more detailed illustrations of their genitalia. Among Simon’s specimens are three forms of female, only one of which (under L. cyrboides   Simon, 1900) was described by Simon and Galiano. As these females are all from the same site (Colonia Tovar) from which the males of three Lapsias   species were described, we are faced with a puzzle as to which females match which males. This is considered below under the notes for each species.

All four of Simon’s species have two retromarginal teeth on the chelicera, and three pairs of ventral macrosetae on both the tibia and metatarsus of leg 1. The median apophysis of the palp is a long narrow blade, hooked at the tip and separated from the tegulum by a membrane. There is a small apophysis just retrolateral from the base of the embolus in L. estebanensis   , L. tovarensis   Simon, 1901, and possibly L. ciliatus   Simon, 1900 (see c? in Figs 14 View Figures 12–18 , 43 View Figures 41–51 ) that by position is likely homologous to that called the conductor by Maddison (2012) in L. canandea   Maddison, 2012 and in Thrandina   species (see discussion by Ruiz 2013). The sclerite functioning as a conductor in Amilaps mayana   (p in Fig. 3 View Figures 1–11 ) is likely not homologous, given its more distal position outside the loop of the spermophore. The female spermathecae of all three species ( Figs 28 View Figures 19–29 , 38 View Figures 30–40 , 49 View Figures 41–51 ) are thick-walled and bear a pale rough-edged extension to the anterior (most easily seen in Fig. 28 View Figures 19–29 ; partially hidden behind the fertilization ducts in Figs 38 View Figures 30–40 and 49 View Figures 41–51 ). 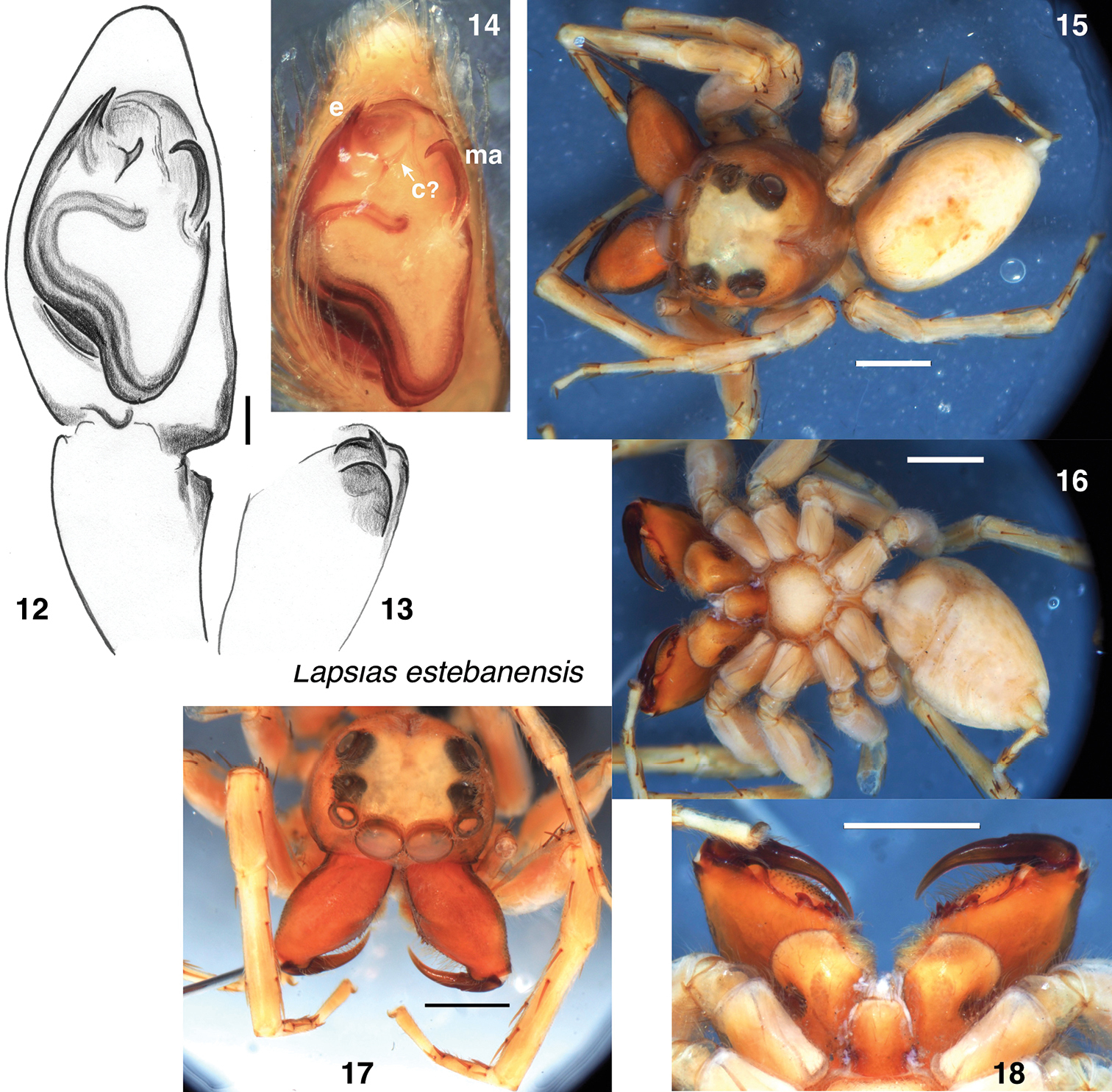 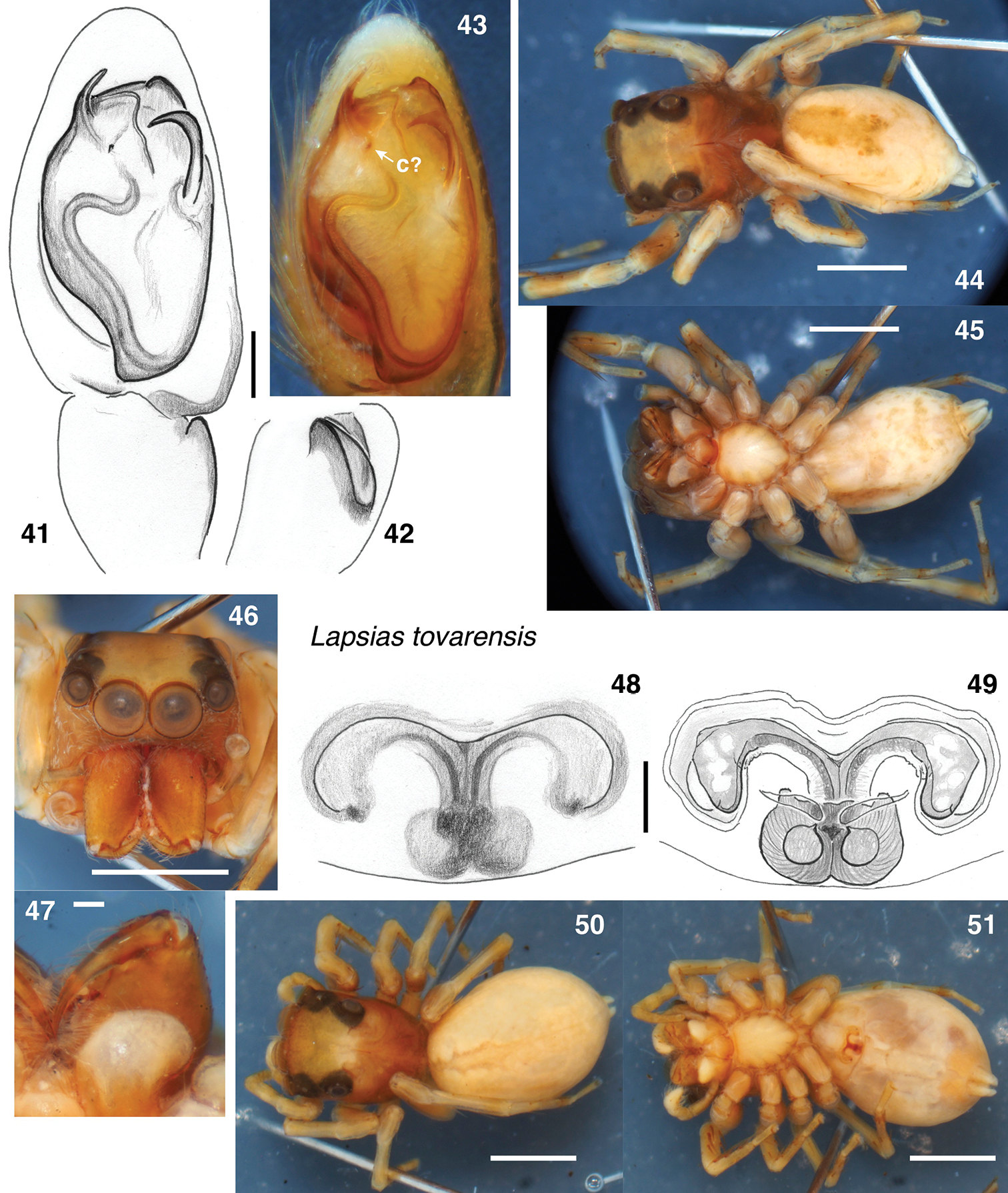 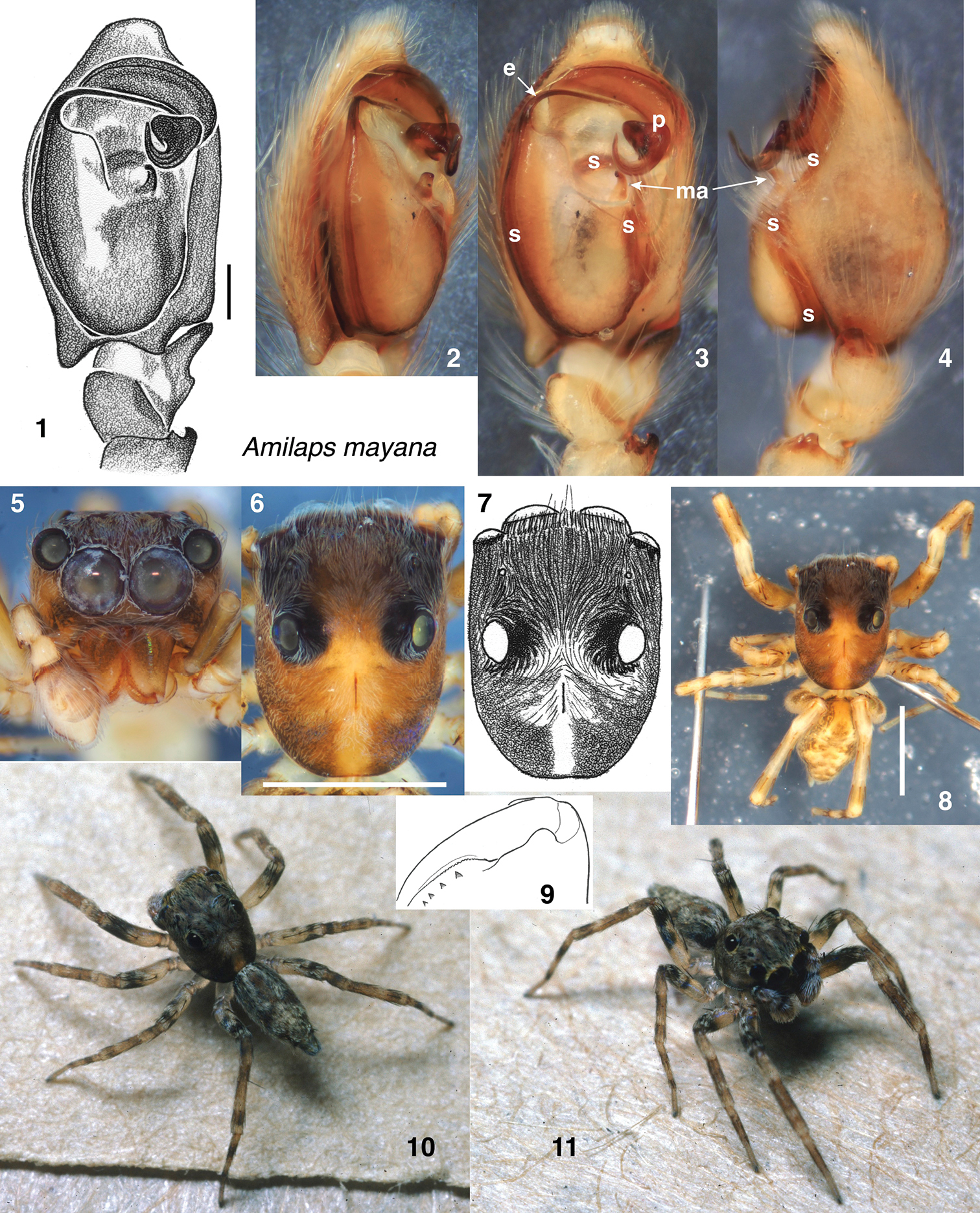 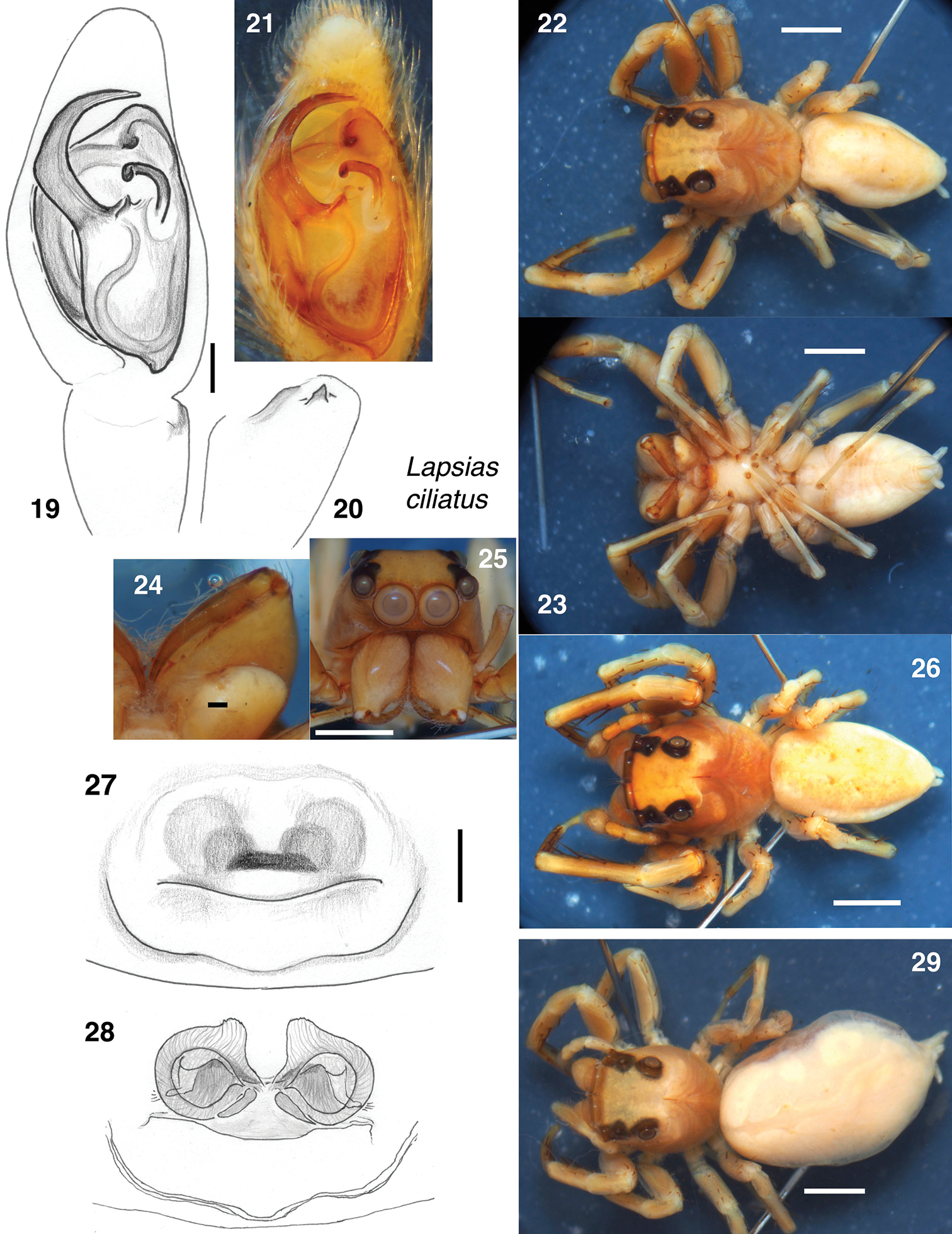 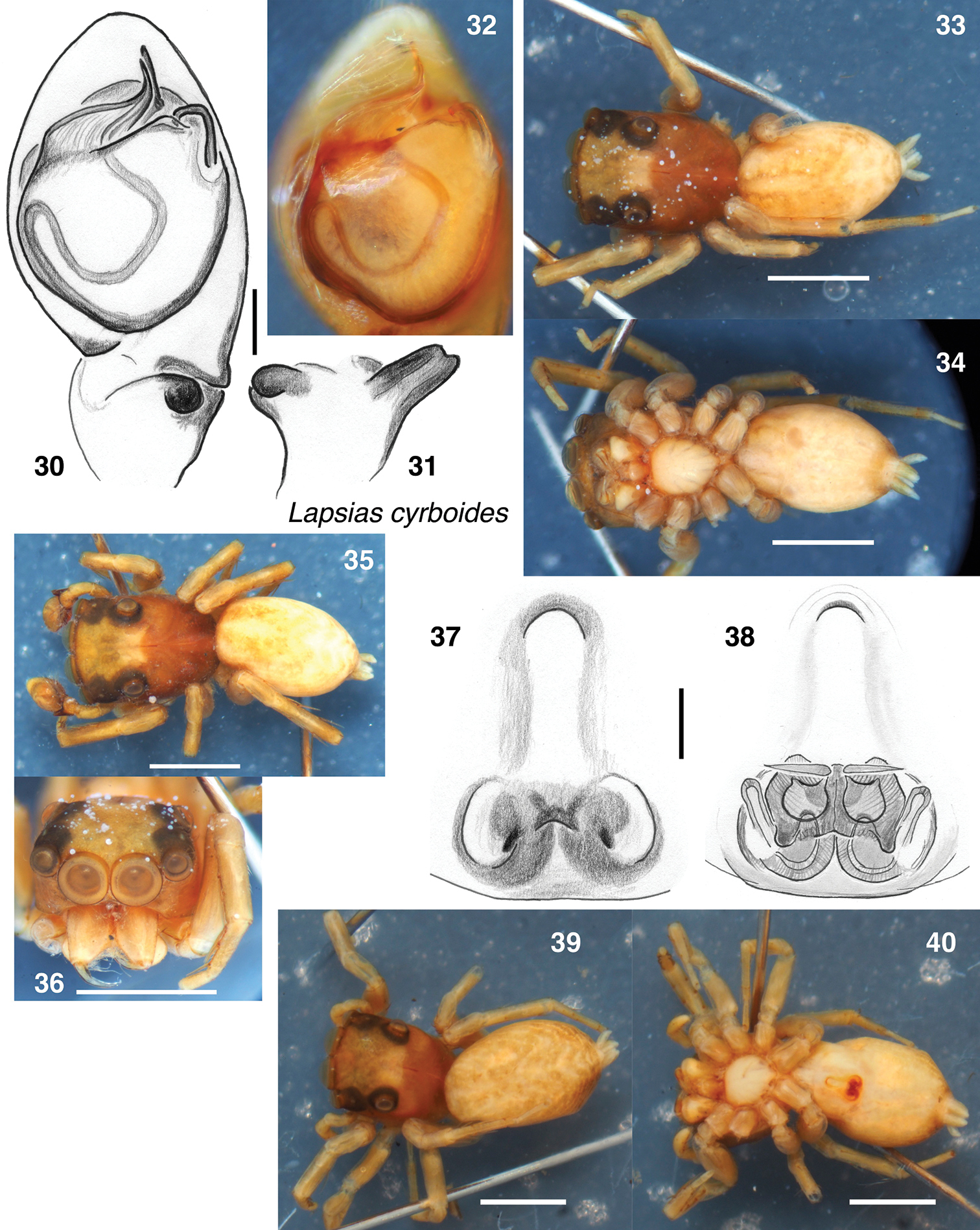