We hypothesize that this new, cryptic species occurs in western, central and eastern Africa, east of the Niger Delta, and it has been considered to be conspecific with Toxicodryas pulverulenta since it was first documented to occur in Angola by Peters (1877). The recognition of this new species is supported by evidence from molecular data ( Fig. 2 View FIGURE 2 ) and significant differences in subcaudal scale counts (see Results).

Coloration (in life) of the holotype. Silvery gray-brown over the entire length of the dorsum including the head, with similarly colored but darker diamonds occurring laterally over the full length of the neck, body, and tail. These diamonds are elongated vertically, have pale gray centers, and often have black spots at the top and bottom corners. Between each diamond on the body and neck is a more vaguely defined, pale gray diamond or stripe. The lateral and antero-dorsal sides of the head are speckled, as is the ventral side of the head, neck, body, and tail. The venter is otherwise white, with the speckles forming two pale stripes running down either side of the ventrals and subcaudals. The base of the tongue is orangish red, and the forked tip is silvery white with black edging.

Coloration (in preservative) of the holotype. This specimen’s coloration has become slightly darker and browner than it was in life, with less pronounced patterning on the flanks, but otherwise the appearance is similar to the coloration in life.

Bogert (1940:fig. 8) illustrated the maxillary teeth of a specimen (AMNH 50590) from former French Cameroon, noting “ five specimens examined show variation from eleven to thirteen anterior subequal teeth followed after a very short diastema by two larger grooved fangs and a smaller fang, the total number of teeth being fourteen to eighteen.” Because only two of his examined specimens originated from former French Cameroon, at least three of these specimens are from Liberia, which are attributable to T. pulverulenta .

Schmidt (1923:103) quoted field notes of Herbert Lang for DRC snakes as “coloration, in life, reddish brown above, head darker brown. Irregular dark gray lateral bars, wider in the middle, extend from the vertebral line to the venter, tipped above and below with black. A cream-colored central spot in the broad portion of each lateral bar. Faint narrow grayish crossbars between the wider ones, disappearing posteriorly. The wider crossbars are usually alternate, sometimes confluent on the back. Venter pinkish gray, heavily dotted with brown which forms two lines at the inner edges of the ventral edges of the ventral angle. These lines are more distinct beneath the tail.” Hellmich (1957b) described several individuals from Angola with a reddish brown to reddish blue-gray dorsum, with varying degrees of contrasting rhombic patterns and spots. Pitman (1974) provided a similar description for specimens from Uganda, noting they range from pinkish-brown to reddish-brown. Hedges (1983:21) described Kenyan specimens as, “a rather pretty pattern of coffee coloured diamond shaped markings on a mushroom pink body.” Rasmussen (1997b) described coloration in this species (presumably based on examined specimens from Nigeria and Cameroon) as reddish brown on the dorsum of the body; dorsum of the head darker brown; irregular, dark gray, diamondshaped spots on the flanks that are widest at mid-body; spots edged in black on superior and inferior edges with a cream spot in the center that sometimes fuse together in the midline; faint grayish transverse bands between spots that fade and disappear posteriorly; venter pinkish-gray, with dense brown spots that form a line just inside and parallel to the keeled ventrals, most salient on the tail. Pauwels et al. (2019b) noted a specimen from Gabon with an orange tongue in life. Spawls & Branch (2020:239) noted the dorsal color can range from pinkish to brown, redbrown or pinky gray with “darker” cross-bars that enclose a “pale” spot. The dorsum and venter are “finely dusted” with brown or black specks, whereas the venter is pale pink with “dashed dark lines” on each side of the ventrals. Contrary to Pauwels et al. (2019b), they noted the tongue is pink with a white tip. Based on our photographs of DRC snakes (e.g., Fig. 12G View FIGURE 12 ), the tongue is orangish red, and the forked tip is silvery white with black edging, which is consistent with the coloration of the holotype in life (EG pers. obs.). An unsexed individual from Banalia, DRC ( Fig. 12F View FIGURE 12 ) is unique in having a golden yellow mid-dorsal stripe.

Diet. Pitman (1938) mentioned a juvenile from Uganda that had a small mouse in its stomach. In Kenya, Hedges (1983) noted the species eats small chameleons, geckos, and frogs. Butler & Reid (1990) described an adult female from Nigeria that contained the remains of an Agama sp. lizard (sensu Leaché et al. 2017). Spawls & Branch (2020) listed the diet as arboreal lizards and rodents.

Parasites. Pitman (1938) noted a juvenile from Uganda with numerous ticks.

Behavior. Pitman (1974:128) described the species as “arboreal, nocturnal... amiable disposition,” and suggested that it might rely on camouflage to avoid predation, a sentiment also suggested by Gans (1961). Chirio & LeBreton (2007) suggested the species is shy and rarely bites. Spawls & Branch (2020) noted that when threatened, it elevates the anterior part of its body, “flickers its red tongue,” hisses, and strikes.

Geographic distribution and habitat. Based on molecular data from Allen et al. (in press) and patterns of our morphometric data ( Table 2), we hypothesize that this species occurs east of the Niger Delta in Nigeria, Cameroon, Equatorial Guinea, Gabon, CAR, Republic of Congo, DRC, Angola, Uganda, South Sudan, and Kenya. Ullenbruch & Böhme (2017) recently listed the species from South Sudan.

Venom. Based on a specimen from Cameroon, Taub (1967) described the histological morphology of the Duvernoy’s gland. Venom composition and effects are unknown ( Weinstein et al. 2011).

Etymology. The specific epithet adamanteus is a Latin adjective referring to the diamond-shaped marks on the flanks and dorsum of this species. 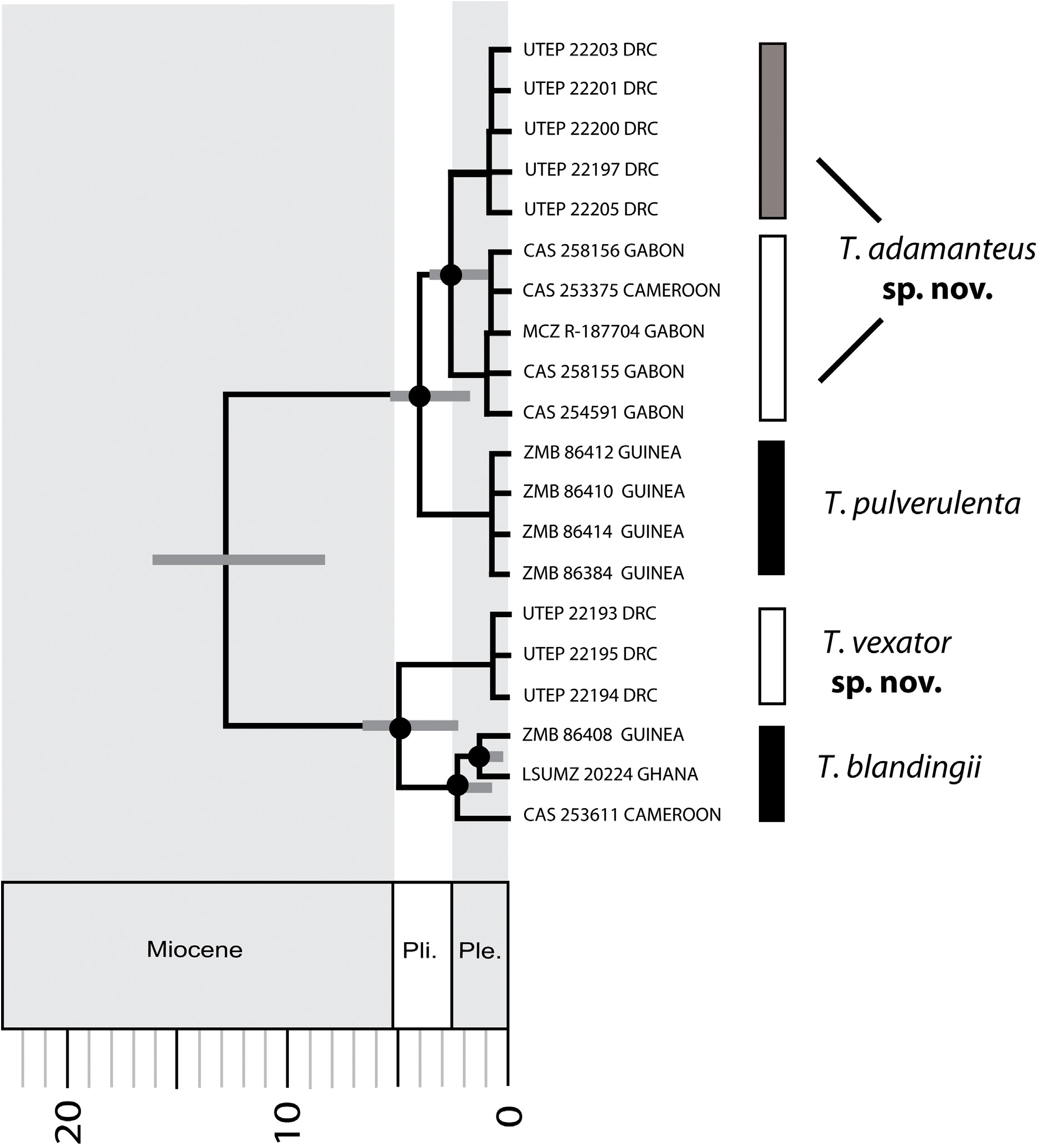 FIGURE 2. A time-calibrated Bayesian phylogeny of Toxicodryas, based on the cyt b and c-mos genes, modified from Allen et al. (in press). Highly supported nodes (posterior probability ≥ 0.9) are denoted with a black circle. Node bars represent 95% confidence intervals. RADseq (2848 loci) phylogenies showed identical topologies. The five clades supported as distinct species by all species-delimitation analyses of Allen et al. (in press) are shown as black, white, and gray rectangles. Toxicodryas adamanteus sp. nov. includes all populations in Central Africa, including Cameroon, Gabon, and Democratic Republic of the Congo. Outgroups not shown. 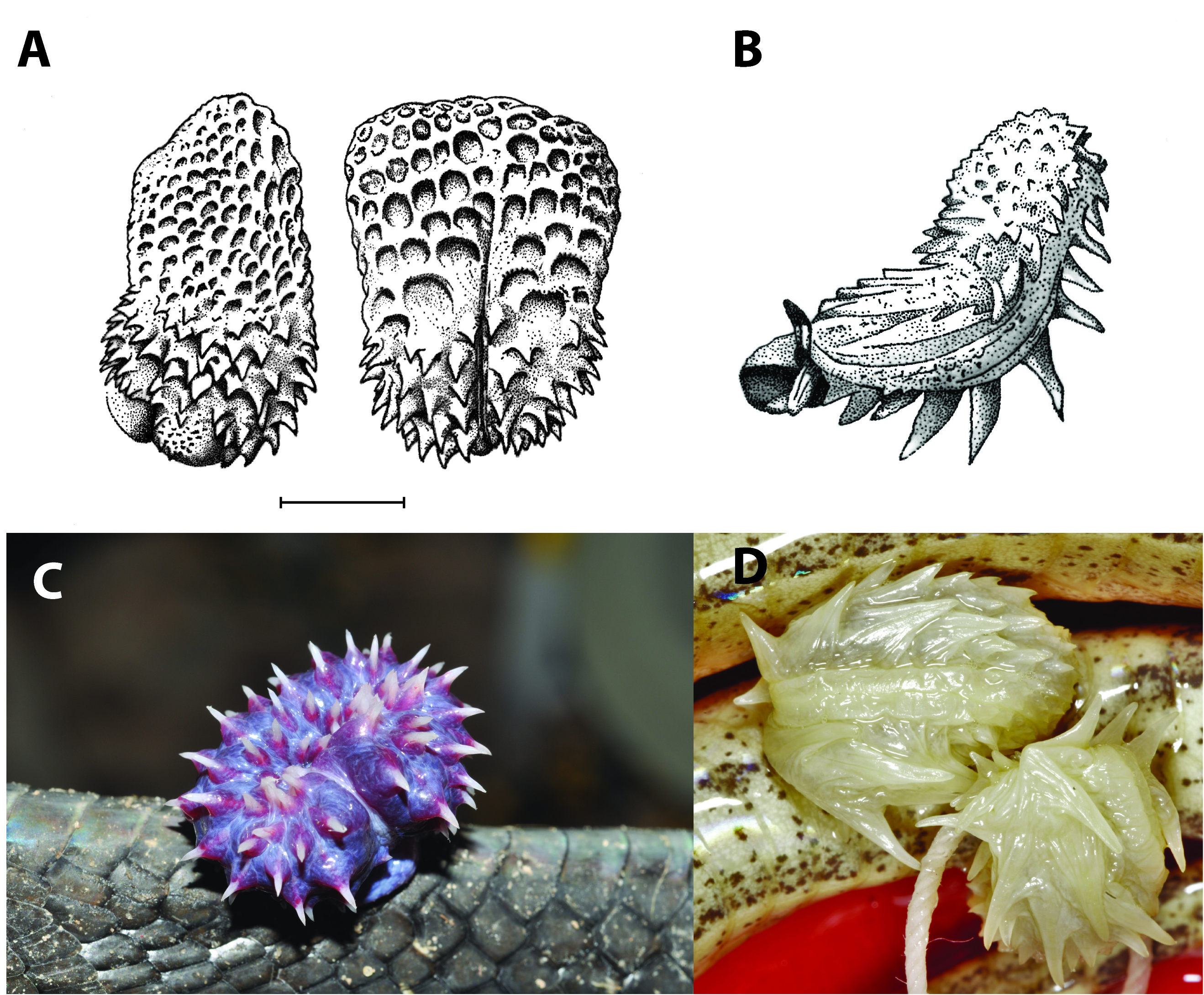 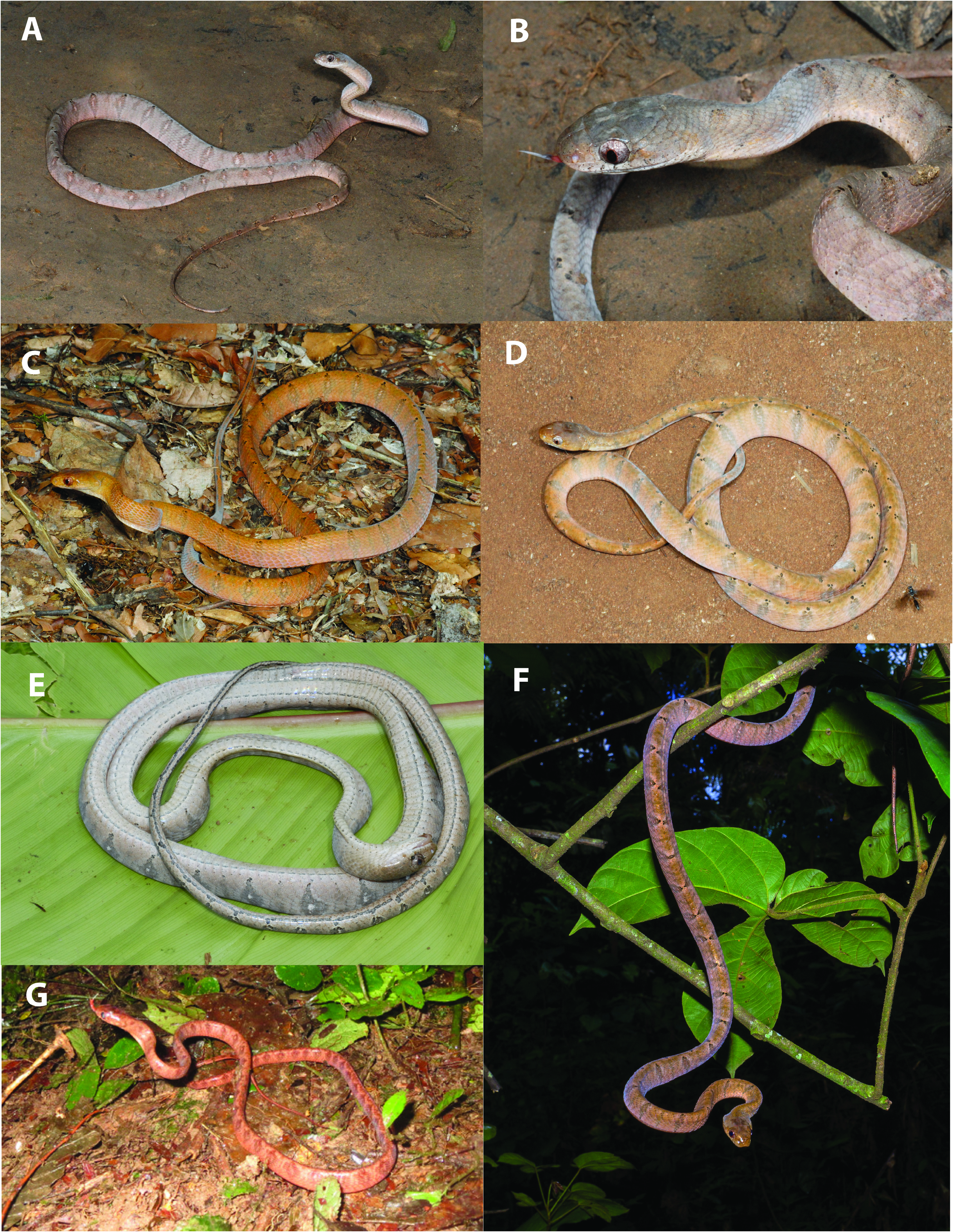