Abdomen ( Fig. 17 View Figs 16-21 ) wedge-shaped, widest at base; tergites III-VI with sharp and pronounced paratergites gradually decreasing in height; tergites III-VI impunctate except for some minute punctures at posterior margins; tergite VII ( Fig. 26 View Figs 22-27 ) with rather coarse non-setiferous punctures in posterior half, but without striate sculpture; posterior margin of tergite VII with pronounced palisade fringe.

♀: sclerites of segments IX and X with very long and dense dark pubescence; spermatheca as in Fig. 27. View Figs 22-27

C o m m e n t: This species was erroneously recorded from Taiwan as O. hauseri   by PACE (2010). The distribution of O. hauseri   is confined to North India and Nepal ( ASSING 2006a). The records from mainland China (Sichuan, Yunnan) by PACE (2012) are most likely based on misidentified material, too.

The female from Anmashan is distinguished from the remaining material by extremely sparse punctation of the head and by a distinctly shorter antennomere XI. A clarification of whether these differences are an expression intra- or of interspecific variation is currently not possible. The paramere of the male from Peinantawushan has the apex of the condylite nearly reaching that of the paramerite. Since no additional distinguishing characters were found, this difference is attributed to intraspecific variation.

C o m p a r a t i v e n o t e s: Based on the external (coloration, body proportions, punctation, chaetotaxy) and the sexual characters (morphology of the aedeagus and the spermatheca), O. formosanus   undoubtedly belongs to the O. hauseri   group (see ASSING 2006a, 2006b). The male sexual characters are most similar to those of O. mutabilis   from Nepal, from which O. formosanus   is distinguished by the much more elongated apical antennomere ( O. mutabilis   : only approximately as long as antennomeres IX and X combined), longer antennae ( O. mutabilis   : 1.1-1.2 mm), more transverse antennomeres VI-X, the denser punctation and pubescence of the head, the less sparse punctation of the elytra, the less extensive and sparser punctation of the abdominal tergite VII, the different shape of the crista apicalis of the median lobe of the aedeagus, the distinctly larger and differently shaped paramere ( O. mutabilis   : approximately 0.35 mm long), and the slightly different shape of the spermatheca. For illustrations of O. mutabilis   see ASSING (2006a).

D i s t r i b u t i o n a n d n a t u r a l h i s t o r y: The species is known only from Taiwan, where it was found in several localities in Nantou, Taichung, Pingtung, and Kaohsiung provinces and where it is currently the sole representative of the genus. The specimens were sifted from wet moss and debris along a river, from leaf litter under broadleaved bushes, and from leaf litter in primary broadleaved evergreen and in primary mixed forests at altitudes of 1500-2500 m (SMETANA pers. comm.). 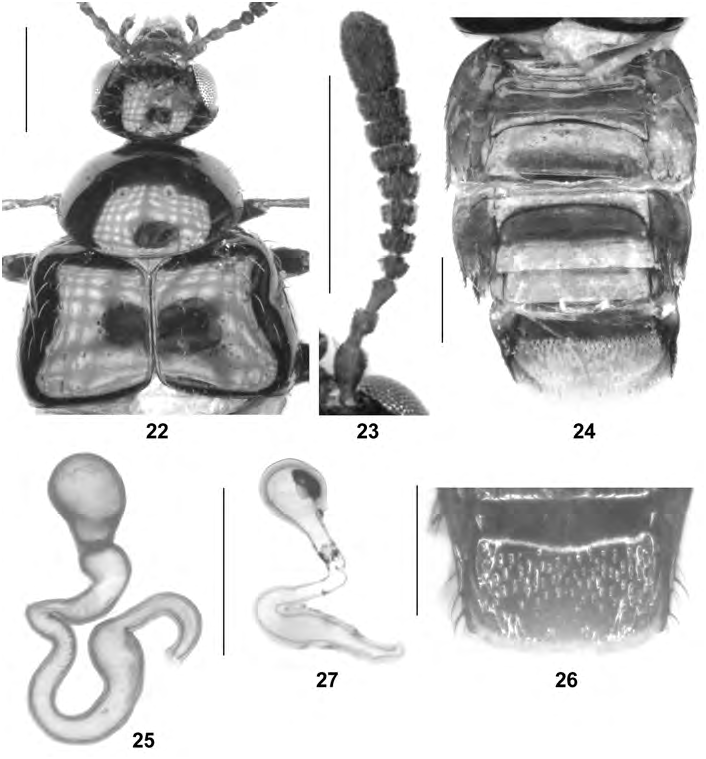