Polyp—Colonies erect, sympodial, occasionally branching. Erect stems up to 12 mm high, monosiphonic, arising from a creeping hydrorhiza. Internodes 768.4 μm long, slightly curved, each with 4–7 annulations at the base; pedicel with distal hydrotheca. Internodes with upward curved apophysis, adjacent to hydrothecal pedicel, given off the next internode in alternate directions. Pedicels 439.0 μm long, with 5–16 annulations along its whole length. Hydrotheca cylindrical, 822.8 μm long, 476.3 μm wide at margin, 154.6 μm wide at diaphragm, with thin perisarc. Margin with 12–15 acute triangular cusps, often folded inwards, with pleats extending from the tips of the cusps downwards to the upper part of the hydrothecal wall. Hydrothecal diaphragm thin, transverse. Gonotheca cylindrical, smooth, arising from the base of hydrothecal pedicels. Gonothecae pedicels short, with 3–4 annulations. Gonotheca 918.5 μm long, 417.4 μm in maximum diameter, with a small constriction near the aperture (297.3 μm wide), and truncated on top. Up to eight young medusae inside the gonothecae.

Remarks. Clytia striata ( Clarke, 1907)   was included in the synonym of C. linearis (Thorneley, 1900)   by Calder (1991a), as well as Clytia acutidentata Fraser, 1938a   and Gonothyraea serialis Fraser, 1938b   from the northeastern Pacific ( Calder 1991a; Calder et al. 2009). However, the shape of the hydrothecal cusps and the fact that C. striata   have been frequently reported in association with pteropods ( Clarke 1907; Vervoort 1946) suggest they might be different species. The description and figure of C. striata   from Álvarez-León & Wedler (1982) closely agrees with C. linearis (Thorneley, 1900)   , but as the status of Clytia striata ( Clarke, 1907)   is still not clear, a more detailed study is needed to confirm its identification. Specimens of C. linearis   recorded by Humara-Gil & Cruz-Gómez (2018) are smaller in size (colonies 1.4–2.3 mm high and hydrothecae 270 µm long) when compared with our specimens and descriptions from the literature (colonies up to 21.5 mm high and hydrothecae 500–1200 µm long) ( Calder 1991a; Lindner & Migotto 2002; current study). Although their description could be based on early stages of development ( Humara-Gil & Cruz-Gómez 2018), it is also possible that their record represents a different species, but this hypothesis needs to be further investigated.

The diameter of the umbrella, the number of tentacles, and the position of the gonads varied among our medusae specimens, suggesting they represent different stages of development. Considering these variations, as well as the shape of the gonads, they agree with the description of C. linearis (Thorneley, 1900)   of Lindner & Migotto (2002). However, it is important to acknowledge that the medusae of Clytia Lamouroux, 1812   are usually challenging to identify due to the paucity of diagnostic characters that frequently overlap among different species, as a result of their ontogenetic variation. Therefore, we stress the importance of additional life cycle studies with species of Clytia   to uncover potential morphological and genetic variation of their medusa stage, contributing to species delimitation. 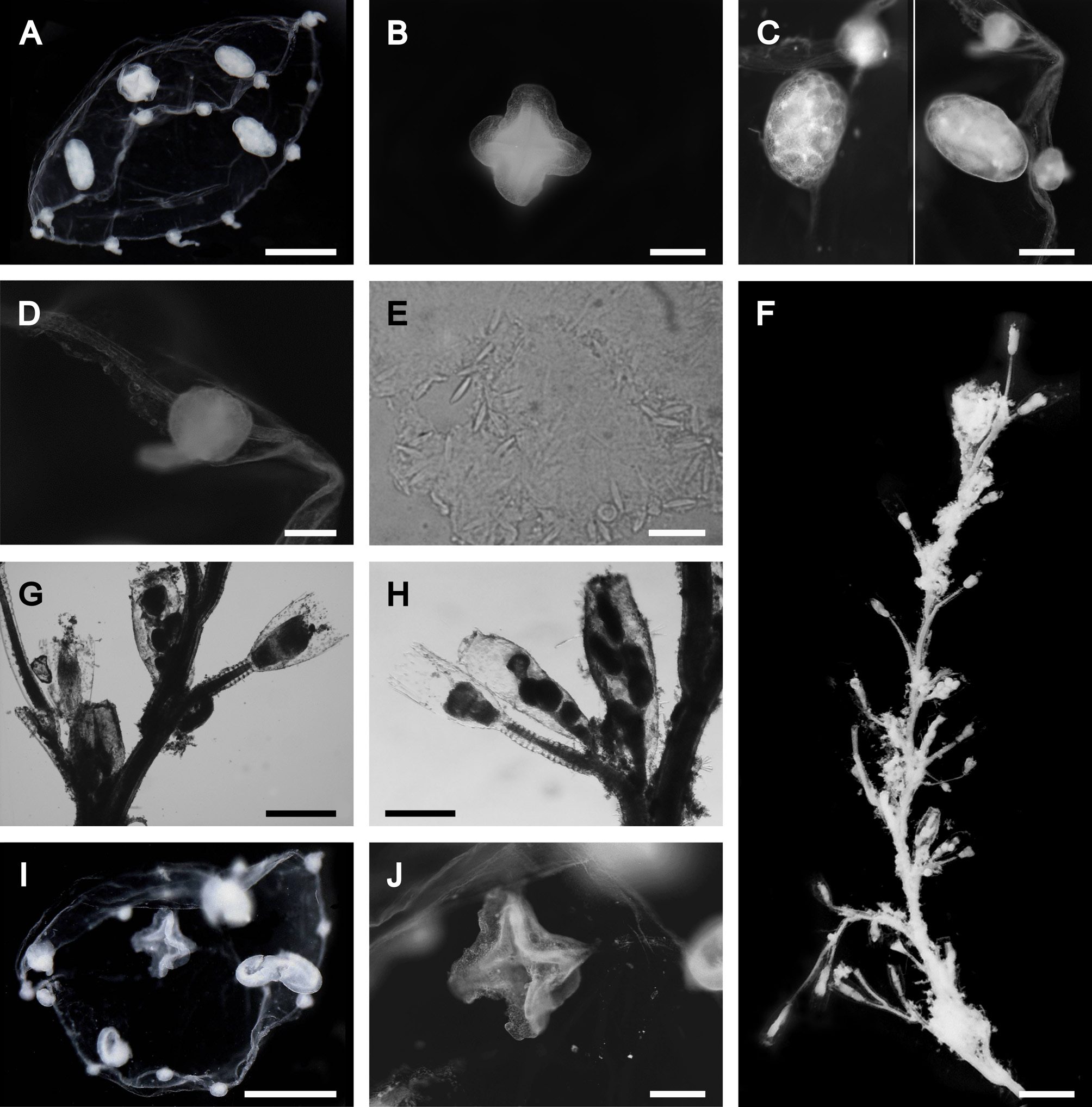