Etymology. The new species’ name refers to Viserion, one of Daenerys Targaryen’s three dragons of the popular TV series “Game of Thrones”. The dragon-related name was originally inspired from the Spanish name of the collection site, Boca del Drago (= dragon’s mouth). Used as a noun in apposition.

Distribution. West Atlantic: presently known only from the type locality on the Caribbean coast of Panama.

Ecology. All three specimens were collected under large rocks on fine white sand approximately 1–2 m away from a dense meadow of turtlegrass ( Thalassia testudinum Koenig   ), at a depth of about 2– 3 m.

Remarks. Alpheus viserion   sp. n. is morphologically closest to several species of the transisthmian, taxonomically challenging A. armillatus H. Milne-Edwards, 1837   species complex (see below), which was studied with three molecular markers by Mathews & Anker (2009). The western Atlantic members of the A. armillatus   complex were subsequently revised by Anker (2012). The eastern Pacific species of the A. armillatus   complex, among them two taxonomically problematic species and at least two undescribed ones ( Mathews & Anker 2009), will be revised in the near future (A. Anker, in prep.).

All members of the A. armillatus   species complex are characterised by the rostral carina conspicuously flattened between the orbital hoods, forming a more or less well-defined, V-shaped or U-shaped post-rostral plate, rising above the usually deep adrostral furrows; the major chela of a basic edwardsii - type (see above); the merus of the cheliped armed with a strong distomesial tooth; the minor chela non-balaeniceps in both sexes; the ambulatory pereiopods with simple, conical dactyli; and the third and fourth pereiopods with distomesially unarmed meri (modified from Anker 2012). Additionally, in several species, the pleon is armed with sternal processes, usually on the first two sternites, sometimes on the first four sternites ( Kim & Abele 1988; McClure 2002; Anker 2012). The morphological features of A. viserion   sp. n. are generally consistent with the characteristics of the A. armillatus   complex, although the post-rostral plate of the new species is less obvious and not abruptly delimited from the adjacent adrostral furrows as in most species of the A. armillatus   complex ( Fig. 1A View FIGURE 1 ).

Among the western Atlantic members of the A. armillatus   complex, only two species are characterised by the feebly demarcated, roughly V-shaped post-rostral plate, viz. A. carlae Anker, 2012   and A. angulosus McClure, 2002   ( McClure 1995, 2002; Anker 2012), both of them also occurring in Bocas del Toro (Anker 2012). All other western Atlantic species of the A. armillatus   complex have abruptly delimited, V- or U-shaped post-rostral plates and present additionally a series of other morphological differences and/or have different colour patterns (Anker 2012).

Alpheus carlae   has a wide distribution in the western Atlantic, ranging from Florida through the Caribbean Sea to southern Brazil (Anker 2012). The species seems to be genetically strongly structured ( Mathews & Anker 2009) and exhibits a great deal of variation in both morphology and colouration, although the colour pattern type is essentially the same (Anker 2012). Alpheus viserion   sp. n. seems to share more morphological characters with A. carlae   than with any of the other species of the A. armillatus   complex. These include the identical armature of the pleonal sternum (with a median process on each of the first two pleonites, although with some variation); the similar proportions of the major chela; the presence of a cuspidate seta on the ischium of the fifth pereiopod; and the appendix masculina being distinctly shorter than the appendix interna ( Figs. 1D View FIGURE 1 , 2F View FIGURE 2 , 3A, D View FIGURE 3 , 4E View FIGURE 4 ; cf. Anker 2012: figs. 41H–J, 42A, B, 43O). The new species can be separated morphologically from A. carlae   by at least three relatively subtle characters, viz. the shape of the post-rostral area (with an anteriorly wide post-rostral carina, broadening and flattening between the eyes in A. viserion   sp. n. vs. with an anteriorly narrow post-rostral carina, widening and flattening only posterior to the level of the eyes in A. carlae   ); the major chela dactylus longer and with a much less bulging plunger; and the male minor chela without a trace of a ventral notch on the palm (vs. with a slight sinus in A. carlae   ) ( Figs. 1A View FIGURE 1 , 3E, H View FIGURE 3 ; cf. Anker 2012: figs. 41A, 42D–F, 43F, K). In addition, the colour patterns of A. viserion   n. sp. and A. carlae   are radically different. The new species has uniformly olive-green background colour, speckled with pale green-yellow spots, and a homogenously coloured major and minor chelae ( Figs. 5 View FIGURE 5 , 6 View FIGURE 6 ). In contrast, in A. carlae   , the pleon displays transverse bands of red-brown, green-brown or dark brown colour, with at least two pairs of large black lateral spots, and the chelae are brownish speckled with white blotches or dots (Anker 2012: figs. 44–48).

Alpheus angulosus   is another genetically highly structured western Atlantic snapping shrimp, occurring from South Carolina to southern Brazil and throughout the Caribbean Sea and Gulf of Mexico ( Mathews & Anker 2009; Anker 2012; Heuring et al. 2017). As in the previous species, the populations of A. angulosus   exhibit some variation in the colouration of the body and chelipeds (Anker 2012), which apparently is not directly linked to the genetic structure of the species ( Heuring et al. 2017). Alpheus viserion   sp. n. differs from A. angulosus   by the presence of a strong median sternal process on each of the first two pleonites in males (vs. with a weak median sternal process on the first pleonite and without such a process on the second pleonite in males of A. angulosus   ); the telson noticeably narrower, about 1.8 times as long as maximally wide (vs. broader, about 1.5 times as long as wide, in A. angulosus   ); the blade of the antennal scaphocerite distally wider and approaching more the point of the distolateral tooth (vs. distally narrower and with the distal margin greatly exceeded by the distolateral tooth in A. angulosus   ); the male major chela with the fingers longer relative to the palm and with the dactylar plunger shorter and more truncate (i.e. less bulging distally); the male minor chela without trace of a ventral notch (typically present in larger specimens of A. angulosus   ); the ischium of the fifth pereiopod armed with a stout cuspidate seta (vs. unarmed in A. angulosus   ); and the appendix masculina much shorter than the appendix interna (vs. the two being subequal in length in A. angulosus   ) ( Figs. 1A, D, E View FIGURE 1 , 2F View FIGURE 2 , 3A, H View FIGURE 3 , 4E View FIGURE 4 ; cf. Anker 2012: figs. 19D, H–K, 20A, D, E). In addition, the two species present clear differences in their colour patterns, despite a generally similar, uniform colouration of the carapace and pleon. In A. viserion   sp. n., the background of the body is olive-green to olive-brown, speckled with pale green-yellow dots ( Figs. 5 View FIGURE 5 , 6 View FIGURE 6 ), whilst in A. angulosus   , in contrast to the new species, the background varies from pale greenish-grey to bluish-grey and is speckled with darker brownish or dark greenish-red dots (Anker 2012: figs. 22–26). Furthermore, in A. viserion   sp. n., the palm of the major chela is uniformly olive-green in dorsal view (= mesial side of the chela), except for a paler patch on the proximal half of the palm ( Figs. 5A View FIGURE 5 , 6A View FIGURE 6 ), whereas in A. angulosus   , the palm of the major chela is generally more patterned, for instance, the dorsal and ventral notches and adjacent oblique grooves are always conspicuously marked with white or pale yellow (Anker 2012: figs. 22–26).

The only eastern Pacific species of the A. armillatus   complex, which has a smoothly delimited post-rostral plate, is A. tenuis Kim & Abele, 1988   , known from Panama to Mexico ( Kim & Abele 1988; Villalobos Hiriart et al. 1989; Mathews & Anker 2009). The taxonomic identity of A. tenuis   is presently being investigated due to the presence of two genetically distinct and apparently geographically at least partly overlapping clades in the eastern Pacific ( Mathews & Anker 2009). Nevertheless, A. viserion   sp. n. can be easily separated from A. tenuis sensu Kim & Abele (1988)   by the major chela palm with the dorsal shoulder not protruding and not overhanging the dorsal notch (vs. clearly overhanging it in A. tenuis   ); the ventromesial carina of the first article of the antennular peduncle bearing a subacute, anteriorly directed tooth (vs. with a low blunt tooth in A. tenuis   ); the longer stylocerite, slightly overreaching the distal margin of the first article of the antennular peduncle (vs. not reaching this margin in A. tenuis   ); and the minor chela with the fingers subequal to the palm (vs. with the fingers much longer than the palm in A. tenuis   ). Finally, the two species also have different colour patterns ( Figs. 5 View FIGURE 5 , 6 View FIGURE 6 ; cf. Mathews & Anker 2009: fig. 2D) and are allopatrically isolated by the Isthmus of Panama. 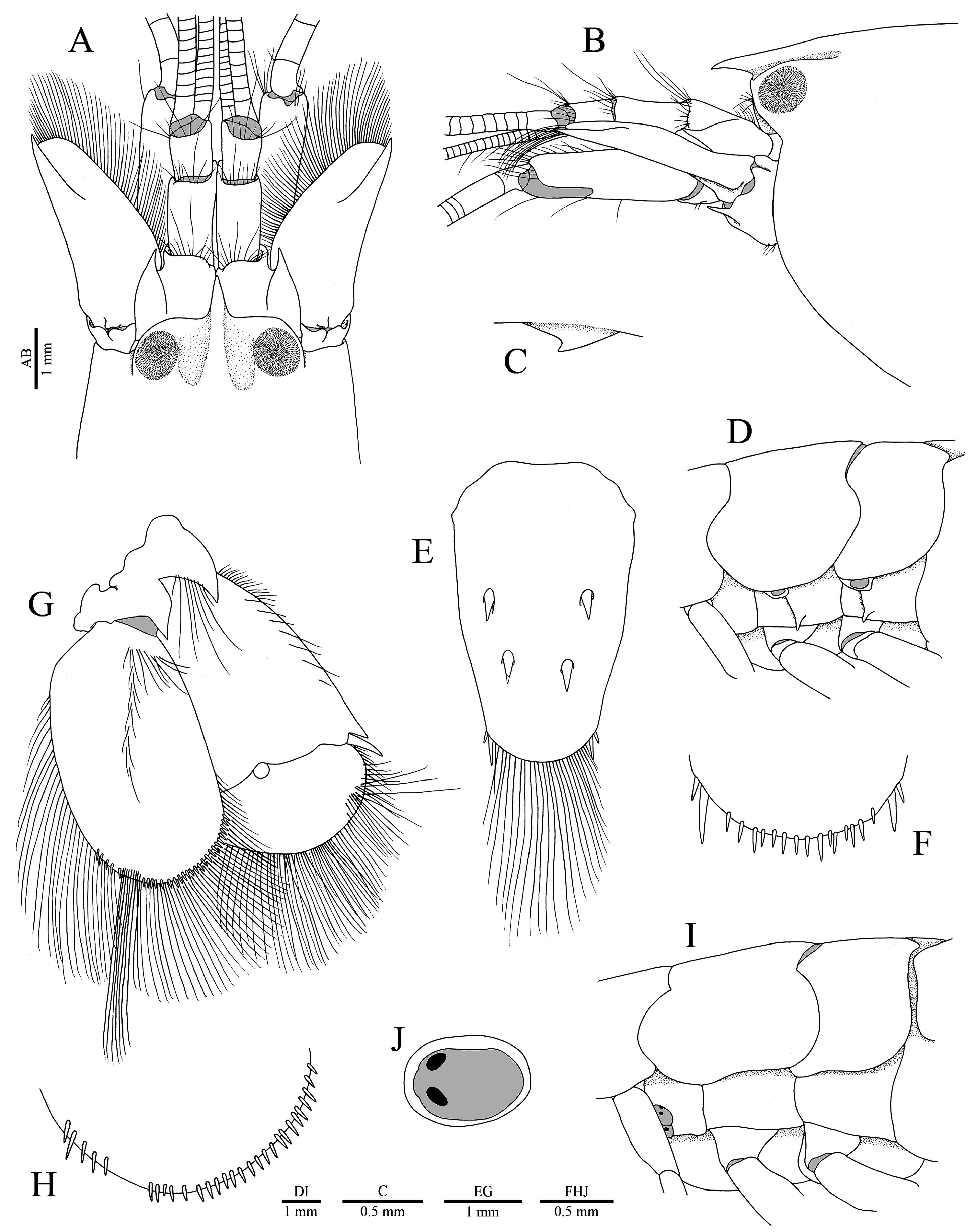