Pseudophoxinus cilicicus   is further distinguished from P. zekayi   ( Fig. 8 View FIGURE 8 ), with which it co-occurs in the Ceyhan River drainage by having the uppermost point of mouth cleft level with or slightly above (vs. below) the centre of the eye, lateral view of the mouth cleft almost straight (vs. sigmoid), black pigment below the lateral line present (vs. absent), and a minimum K2P distance of 3.8% based on the DNA barcodes analysed.

Coloration. In formalin-preserved specimens back and upper flank dark-brown or grey, lower part of flank and belly yellowish. In life back and upper flank greenish-brown, lateral flank and belly silvery, often with a yellowish hue. In life a golden stripe running from posterior eye margin to caudal-fin base above a prominent faint- or darkbrown or grey stripe. Often a second, usually indistinct, golden stripe below brown or grey lateral stripe. A promi- nent dark-brown inner-axial stripe well visible in formalin-preserved individuals. Numerous minute and isolated epidermal black spots on flank above lateral line. Few black pigment cells below lateral stripe and none below lateral line except on caudal-fin base. Fins hyaline, usually with orange base or completely orange in life. Membranes hyaline with few very small black dots. Fin rays dusty with small black dots.

Distribution. Pseudophoxinus cilicicus   was found in the catchments of the Arsuz stream as well as in the lower Seyhan and Ceyhan river drainages ( Fig. 1 View FIGURE 1 ).

Etymology. Named cilicicus   based on the classical Latin adjective for the Roman province Cilicia   , which covered the lower reaches of the Seyhan and Ceyhan rivers. An adjective.

Remarks. The population of P. zekayi   found in the river connecting three lakes close to Gölbaşı is separated by a minimum K2P distance of 1.2% from P. zekayi   found at the type locality. We closely examined fishes from these two populations but could not find any differences in meristic or morphometric characters, lateral line length, position of fins, colour pattern or any other character examined here. Therefore, we treat these two populations as one species. Indeed, the drainage system of the Gölbaşı lakes, which is connected to the Ceyhan, seems to have been isolated in the past and its connection might be relatively recent. Freyhof et al. (2018) found an endemic Cobitis   ( C. erkakanae   ) in this area and Geiger et al. (2014) found the Aphanius   from Gölbaşı ( A. boulengeri   ) to be well separated from the adjacent Ceyhan population ( A. alexandri   ) in their COI tree. Furthermore, the distributional pattern of Pseudophoxinus cilicus   and P. firati   roughly resembles that of the two other Cobitis   species found in the area, with P. cilicicus   and Cobitis aliyae   being restricted to the lowland reaches of the Seyhan and Ceyhan and P. firati   and C. evreni   being restricted to the mountain reaches of the same rivers.

We are not aware of any geological situation in the past which might have physically isolated the upper and lower Seyhan and Ceyhan.

Pseudophoxinus atropatenus   and P. sojuchbulagi   were described in the genus Rutilus   ( Abdurakhmanov 1950, Derjavin 1937). We were able to study some materials of P. atropatenus   and our molecular analysis placed this species in Rutilus   . Bogutskaya et al. (2006) included many small leuciscid species in Pseudophoxinus   since all share a set of reductive character states, but several were later placed in other genera. As in Pseudophoxinus   species, the pre-opercular-mandibular canal is interrupted between the angular-articular and the preoperculum in 3 out of 5 individuals of R. atropatenus   examined by us. However, this character state might be related to the adaptation of the species to small springs and we see no reason to exclude it from Rutilus   . Rutilus sojuchbulagi   has not been found again since its description by Abdurakhmanov (1950) and the species might be extinct. FIGURE 1. Site-scale records of Pseudophoxinus species found in rivers flowing to the Gulf of İskenderun based on materials examined for this study and additional records listed by Saç et al. 2019 (see above). 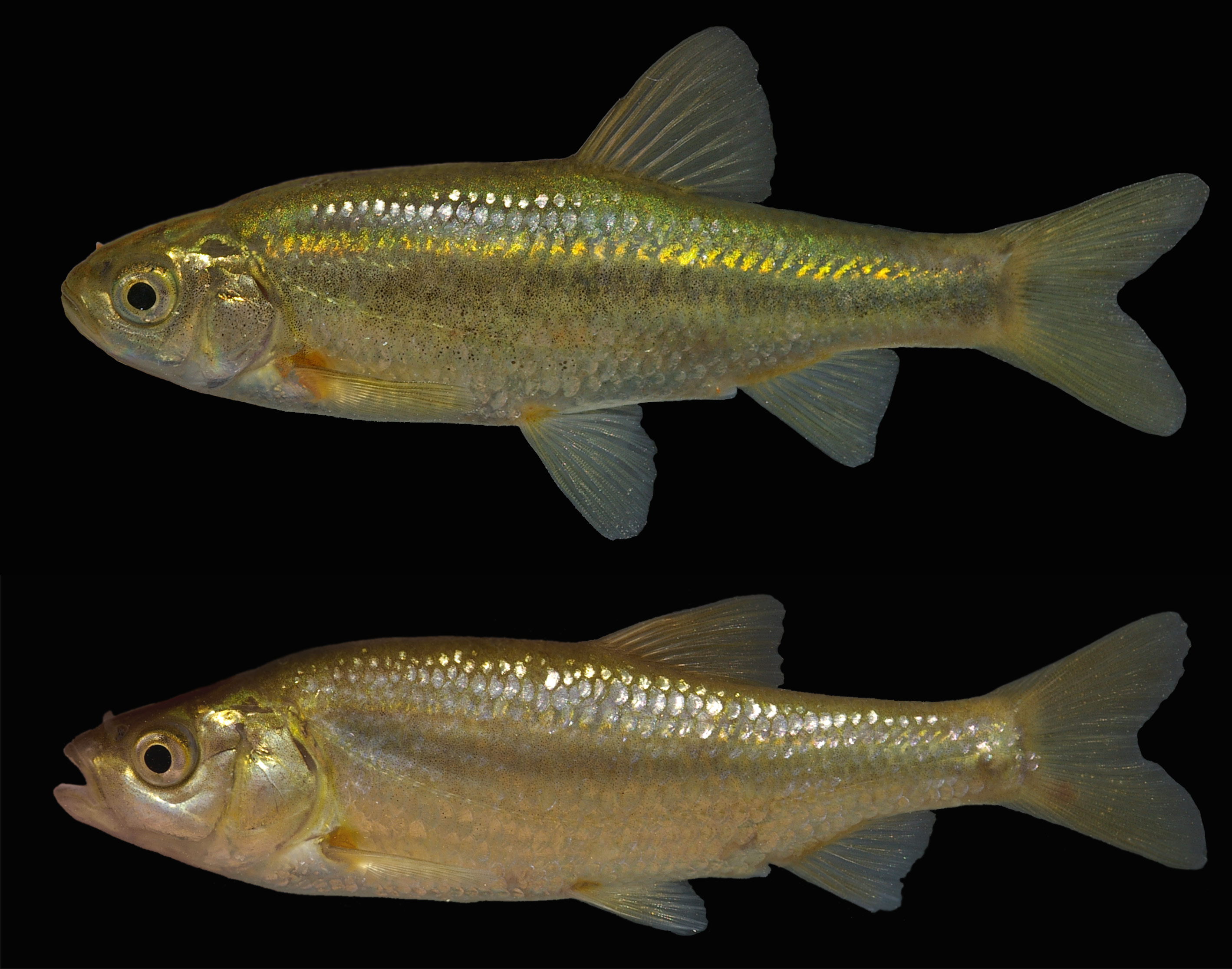